Well, the votes are in, and voters prefer the contract on Propus. The techs mothball the mechs, and we’re off.

For some reason, the contract details changed between the first post and this one. Not sure what’s up there, but the upshot is that all the contracts are now worth slightly less. (It may have had to do with some of my experimentation.) It’s still a pretty good deal, though; 12 million in advance money is plenty. 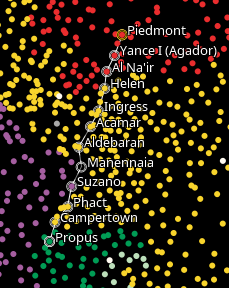 I’m sure it’s a pain to coordinate parts delivery while traveling, but our brave administrators somehow manage.

The parts bill is pretty wild. We now have spare arms and legs for all our mechs, as well as spare leg, arm, hand, and foot actuators. Since we’re fairly energy-heavy, we have ten spare medium lasers, two spare PPCs, and three spare large lasers. The parts stock includes more than 100 tons of armor, 15 heat sinks, and in general, at least one spare for nearly every part in use by the company. Notable absences: heads and center torsos (if we need those, we have bigger trouble) and engines. We have one spare gyroscope for medium mechs and one spare gyroscope for heavies, but none for light mechs or assaults.

Why mention the last one? Because…

The Federated Commonwealth has the best toys, and since we’re working for them, that means we have the best toys. Available in the FedCom mercenary market is an Awesome AWS-8Q, a superb example of the assault mech class and a brand-new cornerstone for our heavy lance. 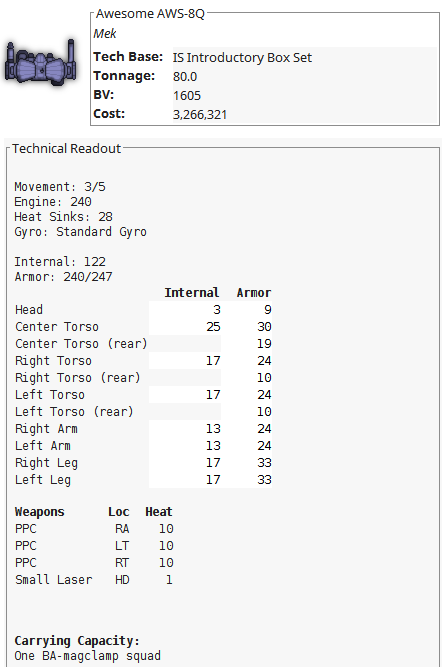 Congratulations to Sgt. Jose Milspec Ortega, who received a promotion to Sergeant, owing to his new role as lance commander. (See below for more.)

The Opinionated Bastards now possess, for the first time, a full company of mechs, as well as a large stock of supplies and spare parts. I expect we’ll be fine for the duration of this present contract. We can re-evaluate supplies when it’s over.

Because we now have a full twelve mechs, I went ahead and rearranged the company. I tried to stick with something in the spirit of Hasek10’s organization, aiming to make lances as close to the weight category limits as possible. 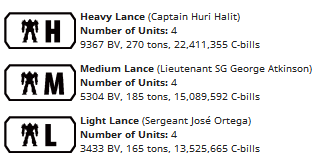 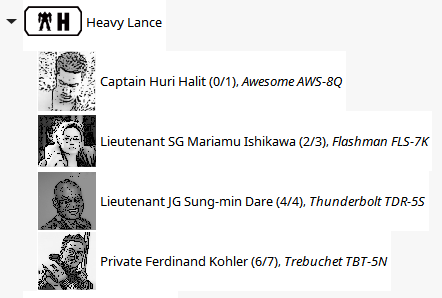 We start off with the Heavy Lance, at 270 tons. Drake moves up to the Awesome. His legendary skill at gunnery should make him a fearsome combatant. Rook steps up into Captain Halit’s old mech, the Flashman; Double Dog gets the Thunderbolt. Rounding out the Heavy Lance is Woad, back in the trusty Trebuchet TBT-5N. His primary role will be to act as a screen and bodyguard for the Awesome. 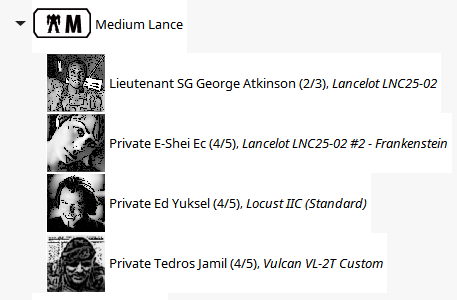 Next up is the Medium Lance, something of a misnomer now. Linebuster Atkinson and Ker-Ker Ec, along with the two Lancelots, take up the first two slots. Clanner Ed Yuksel and his fancy Locust IIC, and Tedros Jamil and his custom Vulcan fill out the lance. The Lancelots are the primary firepower here, both in terms of weight of weapon and of pilot skill. 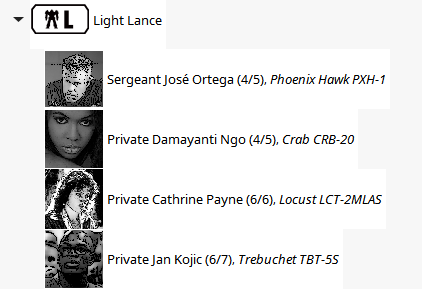 Lastly, the Light Lance, even more of a misnomer. Newly-minted Sergeant Milspec Ortega leads the lance from the Phoenix Hawk, joined by Private Ngo in the Crab, Severe Payne in the Locust, and lastly, Euchre Kojic in the LRM-equipped TBT-5S.

The only mechwarrior without a mech to drive is Private Frajtov, who was evicted from the TBT-5S in favor of Euchre. 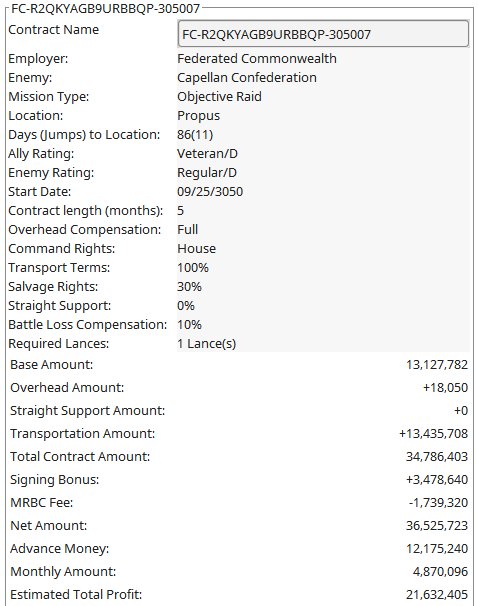 We’ve just started the contract; it lasts until February 25, 3051. At present, the Medium Lance is deployed on Scout duty to fill the terms of the contract. The other two lances are awaiting your direction.