Quick hits and links on the ongoing conflict.

The live blog provider puts the ads in. Block away.

In 2017, we ran the first version of this map, which purports to show the carry situation in the US a little more accurately than the standard permitless/shall-issue/may-issue trichotomy1. That fails to capture some of the nuance—a may-issue state may nevertheless issue permits to just about anyone, and some shall-issue states may be worse than others2.

Here’s the map. You’ll find notes below, along with exact definitions of the colors. 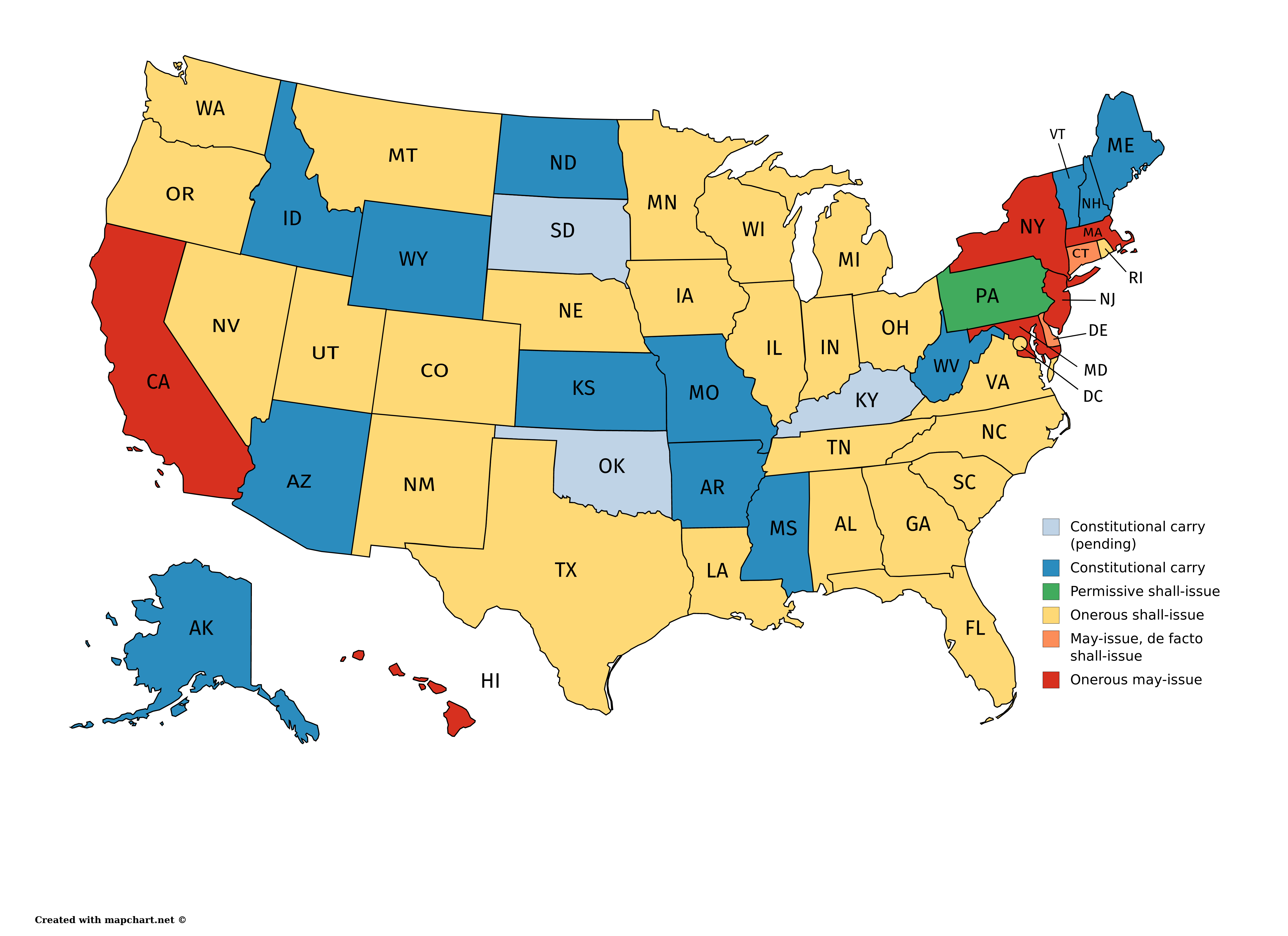 The standard concealed carry map floating around shows states in a few broad categories: may-issue, shall-issue, and permitless. It’s a good map at a glance, but it lacks useful information on the actual experience of carry. Since I just got back from a vacation, and didn’t want to do any real writing work, I went ahead and put together an improved map. 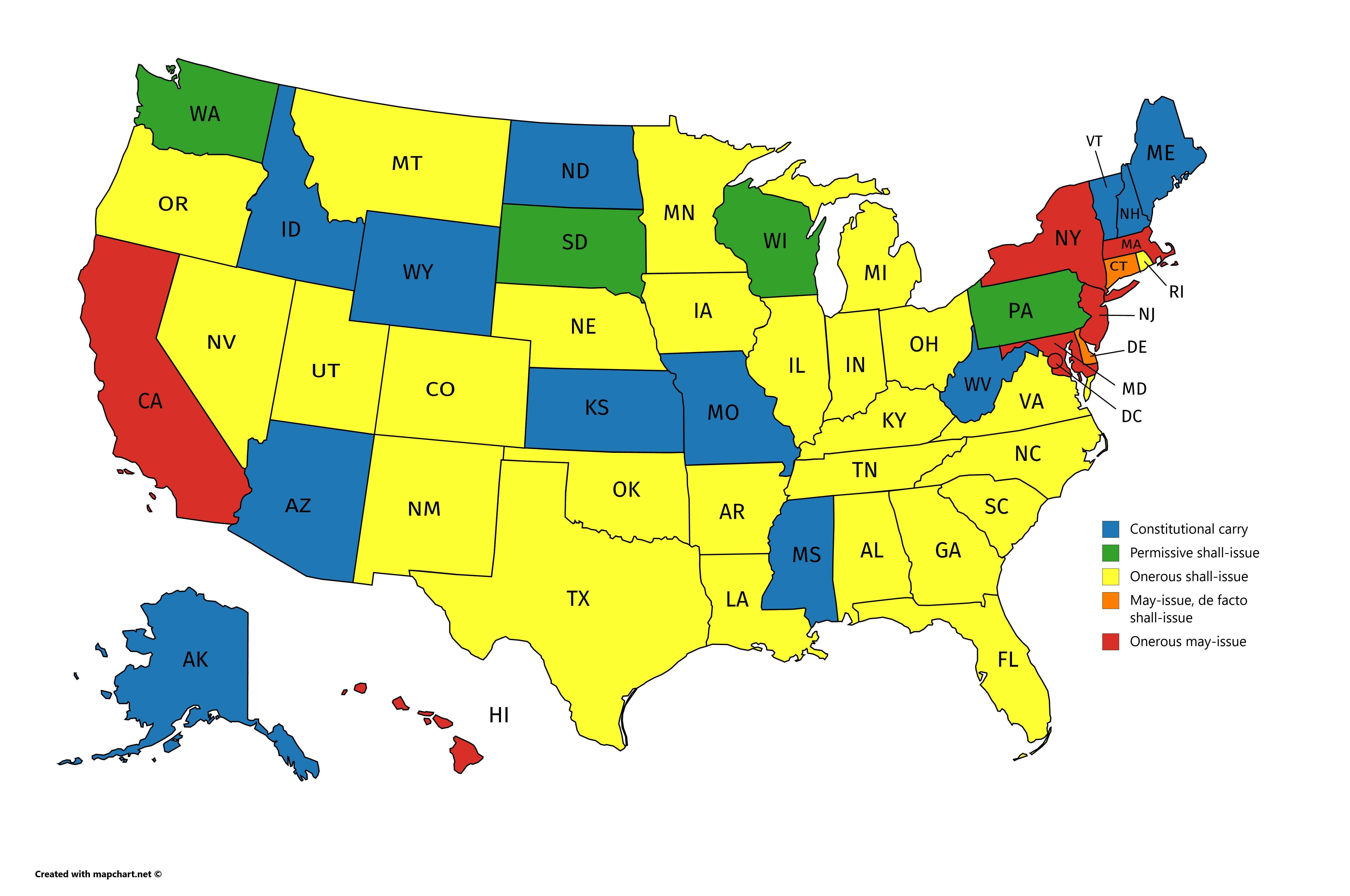 Well, here we are. It’s November 9. In a few months, Donald Trump will be our president. I prefer him over Hillary, but it’s hard for me to say I’m happy with the outcome. There are no good choices between a brutish egotist and a corrupt kleptocrat.

So, in the spirit of united disappointment (though I grant yours is likely greater than mine), I offer this olive branch. We have a president none of us1 is all that happy with. I have little doubt you’re ready to stand in opposition to him. So am I, when he steps out of line. Let’s stand together.

Let’s also talk about why this happened. If you’re reading this and you’re disappointed, I suspect you’re going to go with ‘racism’ or ‘sexism’. This is not true, and it’s unfair to your fellow Americans. A month or two ago, I posted an excellent article on Trumpism from, of all places, Cracked. It gets at the crux of the thing: rural voters perceive that educated urban liberals hate their values. Said rural voters have been content to let it pass, but after a decade or two of the capital’s trouble finding them, they’ve had enough. Now they’ve thrown a brick through the window saying so. Frankly, I think they were right to do so. The documented malfeasance of the media—this year more than ever the Democrats’ palace guard—and the stink in Washington are brickworthy things2. I would have chosen a different brick, but educated suburban conservatives didn’t get to pick the nominee this time3.

I’ve seen murmurings about pushing that ridiculous national popular vote plan. I’d urge against that. The brick came through your window because the rural voter feels like the urban population centers have too much say over the way the nation goes. The Electoral College is designed specifically to give said rural voter a voice. Be careful taking away the ballot box: the next one in line is the ammo box. On that note, I do find myself a little unsettled. If nothing else, this election has cast into sharp relief the gulf between the country and the city. More than any time since about 1860, people on both sides of the aisle feel like they’re living in two separate Americas4. I hope the similarity ends there.

In fact, I believe the similarity ends there, at least for now. We aren’t doomed. America is stronger than that. I believe in the resilience of our system of government and the vigilance of the opposition, both Republican and Democrat, to Trump’s presidency. Let the next four years be a time of renewal of the checks and balances over which the last few executives have run roughshod, a time of returning power to the states and liberty to the people, where power and liberty ultimately belong, and a time to once again become a government of laws, and not a government of men. That’s where I am. I hope you can find your way there too.

1. Except, I believe, parvusimperator.
2. I really doubt any media people are reading this, but if you are and your name is not Jake Tapper, be more like Jake Tapper. That’s all we ask. I don’t care if you have political beliefs so long as you aren’t obviously a partisan on the job.
3. And it isn’t like we have a good record at picking candidates anyway.
4. British political scientist Rob Ford expressed the following sentiment after the Brexit vote: do you feel like you’re a stranger in your own country? That’s the way people voting for (Brexit/Trump) have felt for years.

An earlier version of this article attributed the Cracked article to Buzzfeed, despite the fact that I failed multiple times to find it on Buzzfeed via Google searches, and eventually copied the link from an old Facebook post while thinking, “Well, I guess Google must be wrong.” The error in the article has been corrected.

If you were unfortunate enough to catch the final 2016 presidential debate, you may recall Hillary Clinton’s most bald-faced lie: that the Heller decision was about toddlers, guns, and accidental deaths. It’s difficult to express how comprehensively this is untrue.

The Supreme Court described the law at issue in DC v. Heller as a ‘total handgun ban’. This is not in any way in dispute. The word ‘toddler’ appears nowhere in any of the opinions, nor does it appear in oral argument. The word ‘child’ appears only in Breyer’s dissent, and comes up a few times in the oral argument transcript. In the latter case, though, the context is a discussion of the safe storage requirements imposed by the DC law1. In any event, the children under discussion are, depending on your statistical source, all people under the age of 14, or all people under the age of 18. Hardly ‘toddlers’.

So, there’s nothing in the court’s final decision, and very little in the supporting material, to suggest the primary issue at hand was anything but the aforementioned total handgun ban. And yet, Hillary brought up DC v. Heller as a case in which the Supreme Court failed to properly apply the Second Amendment. Put another way, she supports the DC law as written.

Why might she have chosen to express her position using toddlers as a framing device, then? One possibility is that it’s simple scoring of cheap political points. This is almost certainly the case. However, I posit that it is not the only cause here. I take Hillary at face value when she says that she feels accidental deaths by toddler with gun are a problem worth tackling2. I also take her at face value when she argues that DC v. Heller was a bad application of the Second Amendment. Taken together, what does that mean? Preventing the vanishingly small number of accidental gun deaths among youth per year is an admirable goal, and a complete ban on handguns is a proportional effort to make in service of that goal.

As a gun rights guy, this is a completely terrifying line of reasoning. The right to armed self-defense (whether against petty crime by petty criminals, or high crimes by petty politicians) is a fundamental right, however out of vogue it may be most places in the world. Subjecting fundamental rights to utilitarian arguments is a real slippery slope, not the fallacious kind a particular set of internet leftists are so eager to throw a flag on. There is literally nothing, legally speaking, which distinguishes the First Amendment from the Second. If you’re attacking one on utilitarian grounds, you’re opening the door for an attack on the other.

Leaving aside that argument, though, consider the end result of such utilitarian reasoning. If fewer guns in private hands reduces deaths (which is not settled science, but we, like the gun control supporters, will momentarily assume it to be true), and if government has a responsibility to reduce deaths to as near zero as possible, then the government has a compelling interest in reducing the stock of privately-owned firearms to zero. This chain of reasoning underpins the thinking of every major advocate of gun control.

Don’t believe me? How often have you heard gun control advocates express admiration for the gun laws in Australia or England? If you’re paying attention, the answer is ‘all time time’. Those two countries have de facto gun bans, and de jure gun bans on anything you might be able to reliably use for self-defense. It’s the same in New York, where a recent report blames lax gun laws elsewhere for criminal firearms violence in New York. (As opposed to, y’know, New York’s violent criminals.) The solution? Stronger gun laws elsewhere! Stronger laws in New York, even!

So, gun control supporters, I ask you this: are you for banning guns? If so, good for you; that’s a reasonable position, if one I completely disagree with. Come right out and say that, because it’s a very different position than ‘reasonable regulations’. People deserve to know exactly where you stand. If you do like the sound of ‘reasonable regulations’ but not ‘total gun ban’, then I’m sorry to be the one to tell you, but you’re a patsy for the total gun ban people. They aren’t planning to stop with the gun show loophole (not a thing), the online loophole (also not a thing), better mental health reporting, or anything that sounds good to you. They will exploit your vote as far as you’re willing to give it to them, then they’ll dump you and find the next group of suckers willing to vote for them. Bear that in mind when you go to the ballot box tomorrow.

With primary season finally kicking off in earnest, I thought I should give my thoughts on the state of the race for the GOP.