From us to you, dear readers (and especially our cast of regulars), have a very merry Christmas1. Enjoy the week off, like we’re doing, and we’ll see you on New Year’s Day for your usual defense news roundup.

The nights are long, it’s cold outside, and I’m almost done with my Christmas choir obligations, so it’s time for some winter wargaming.

This year’s selection is Rule the Waves 2. We’ll be playing France, for its interesting position astride the border between Europe (where Germany and Britain vie for naval supremacy) and the Mediterranean (where there are a bunch of second-rate powers to beat up on), and the chip on its shoulder in re: Britain and naval matters.

I like to do some audience participation in these, so I’ll bold occasional decision points throughout posts.

My plan is to post one update a week, each covering about two years of game time, which means a full game (from 1900 to 1955) will take us into summer. I’ll aim to have the updates posted on Thursday, so I can play a little over the weekend and write in the evenings thereafter.

In Rule the Waves 2, France has neither serious perks nor serious drawbacks. We do get two bonus techs (Hardened AP penetrator, which just finished researching, and Quadruple Turrets, which is a decade or two down the road—bonus tech just means we have a good chance of getting it early). Our budget ranks third or fourth, after Britain, Germany, and sometimes the US. We have a moderate budgetary edge over the Italians (but more overseas colonies where we’ll have to station creaking, dilapidated armored cruisers years past their best-by date), and a serious edge over the creaking, dilapidated Austro-Hungarian Empire.

Looking north, we come to the Germans, among our historical foes, and the English, also among our historical foes. In the real-world timeline, England began making overtures to France not long after the present game date, as a way to counterbalance Germany. An alliance north of France, one way or another, might keep us safe from the other party, but might also drag us into wars we don’t really want.

I guess Russia is also up there, but in a game about naval warfare, European Russia might as well be on the moon. (In the real-world timeline, France and Russia are allied, so they aren’t among the six opponents the game chooses to simulate for us.)

Looking west, we have the United States. We don’t have any reason to mess with them, and the only place where we have the bases to plausibly do so is Southeast Asia.

Speaking of which, looking east, we have Southeast Asia, where we’re a major player. Japan is an obvious threat out that way, given that Southeast Asia is their backyard. The Americans, who hold the Philippines, also have interests out there.

Time for the first decision. Where do we focus our strategic interests? In the Mediterranean is my preference, but I could also see convincing arguments for expanding our presence in Africa or the Far East. Relatedly, how hawkish should we be? In Rule the Waves as in real life, it’s much easier to get money appropriated for the Navy when using it is in the cards, but actually having to use it means we might lose parts of it, and if the part of the

Before I get too far ahead of myself, though, let’s take a look at our starting fleet, custom-built according to the theory that France has historically produced some unusual warships.

If you don’t want to zoom in on that, it’s four battleships of the La République class, four armored cruisers of the Gueydon class, five light cruisers of the Tage class, and 16(ish?) destroyers of the Fauconneau class in active service. Under construction, we have another La République, another Gueydon, three Tages, and two Fauconneaus.

Because our ships are built nearly to the limits of our dockyards’ capabilities, we have fewer of them than other nations. We have four battleships, while Italy has seven, Britain has nine, and the Germans have 10 with another four under construction. Our four armored cruisers put us ahead of the Italians, but we lag them in light cruisers and destroyers, although the Tages under construction will change that.

The Austro-Hungarians have less than half the battleship tonnage we do. 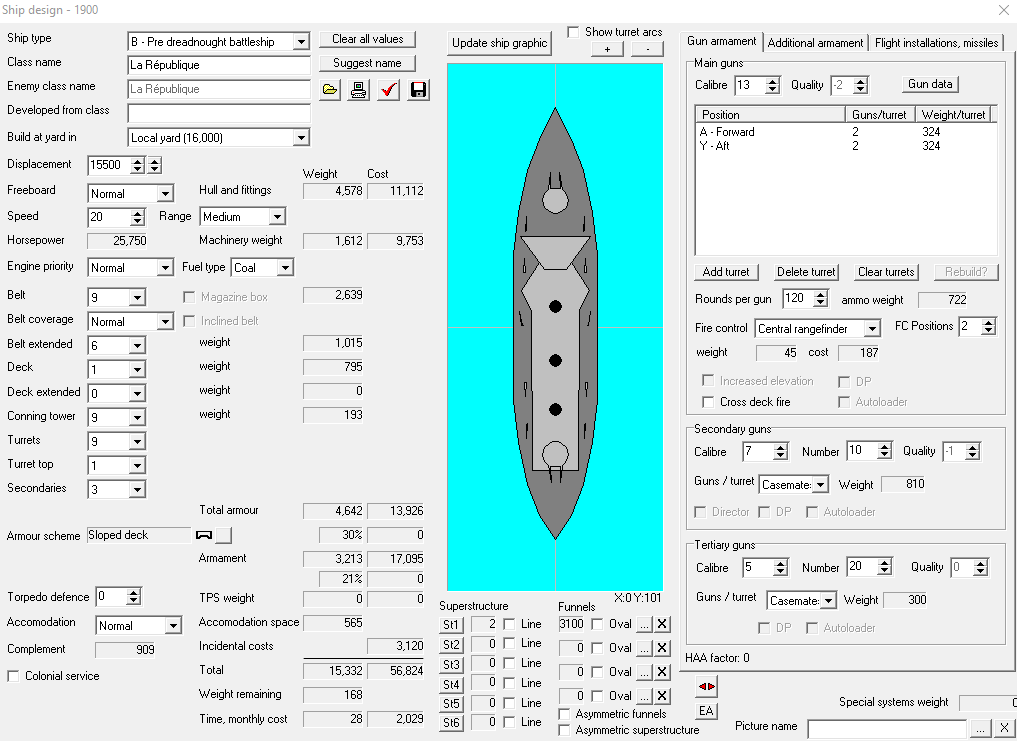 The La Républiques (Les Républiques?) are fast by the standard of pre-dreadnoughts, at a design speed of 20 knots, and well-armed with 13-inch guns. That’s enough to outrun and outshoot their historical British counterparts in the Duncan class, although they give up a bit in terms of armor. 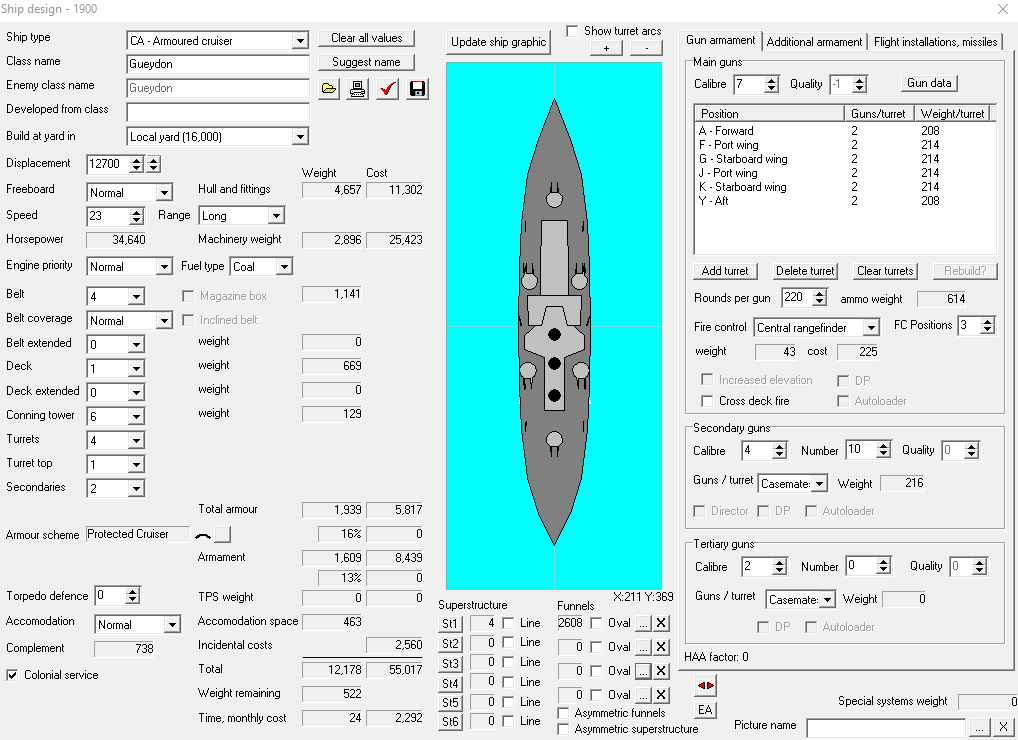 The Gueydons are oddball ships. They’re relatively fast at 23 knots, and their range and internal accommodations support colonial operations. They have about the armor you would expect for the class and era. The strange part is the gun layout. Rather than the usual four 9″ or 10″ guns and broadside casemate 5″ or 6″ guns, they have an all-medium-gun layout: twelve 7″ guns in six double turrets, with a broadside of 8 guns and a fore or aft throw of 6. They also feature three torpedo tubes underwater.

Time will tell if the unusual armament layout is a success or a failure. 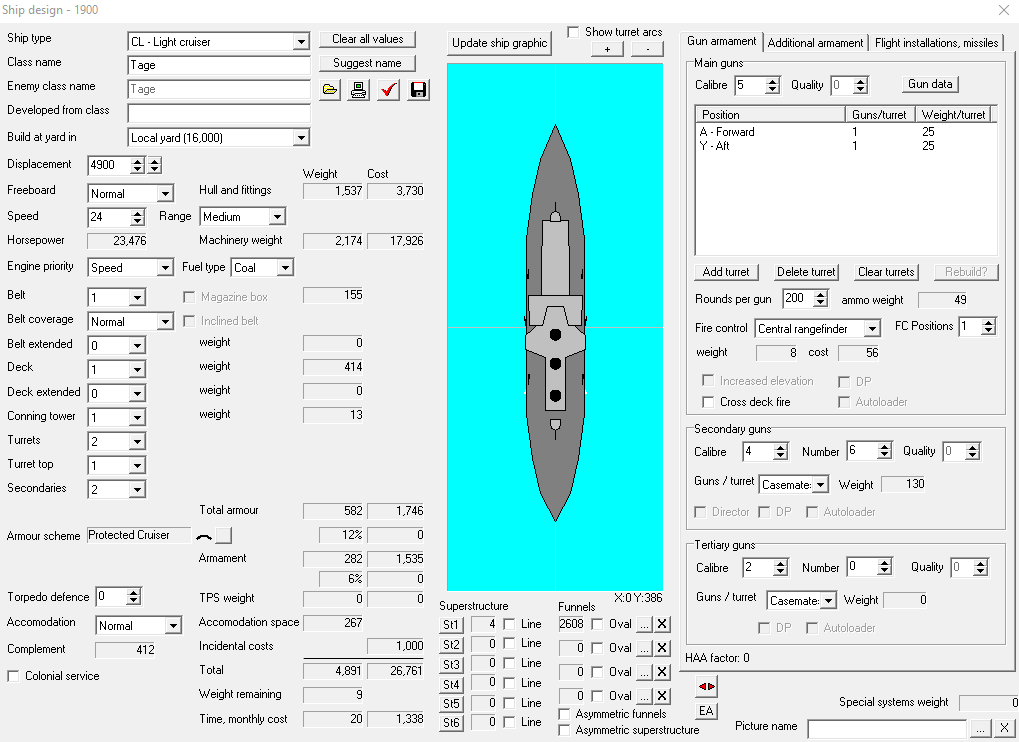 The Tages are also strange, with turreted 5″ guns fore and aft, and broadside 4″ guns in casemates, along with torpedo tubes. They’re lightly armored, and only slightly faster than the Gueydons at 24 knots. (That’s still faster than contemporary light cruisers, though.) Their armament is a bit lighter than their peers’, but their armor is heavier. 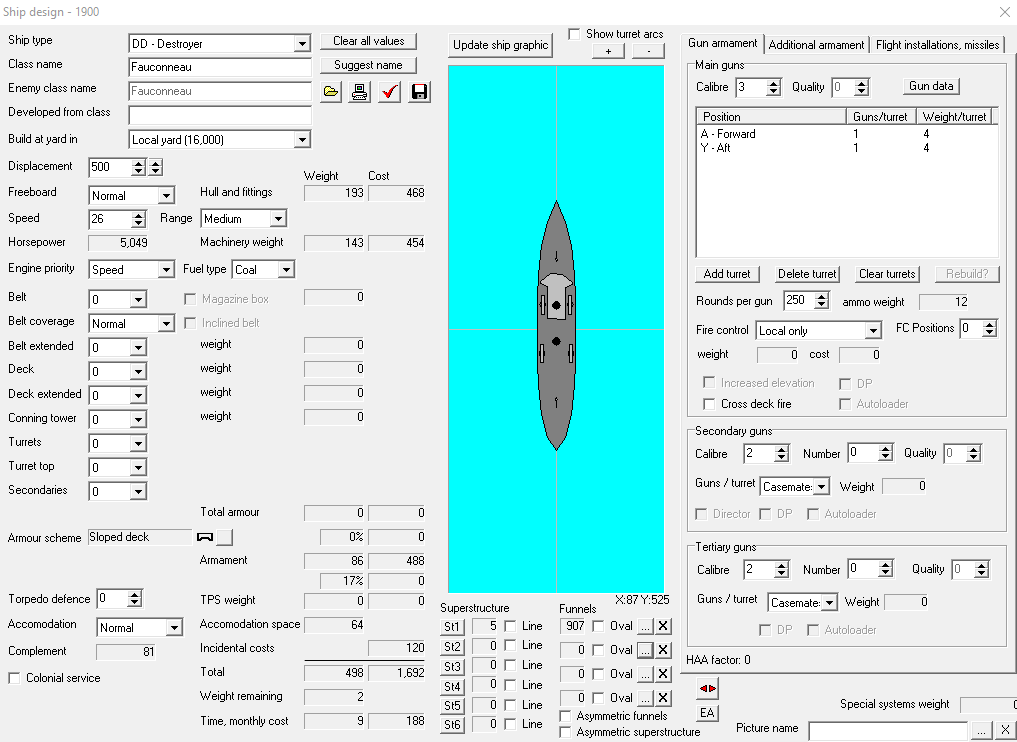 The first and only one of our starting ship classes which is notably slower than its contemporaries, the Fauconneaus make up for it with a few extra torpedo launchers.

Decision point #2: where do we focus our shipbuilding efforts? Is France to build a mighty battleship fleet to crush the Italians and the Austro-Hungarians? Should we focus on cruisers to scour the trade lanes in the event of war? Are submarines, destroyers, and torpedoes worth our time? Is there anything in particular we ought to build right now, or should be build a nest egg for when research begins to pay off? Bear in mind, building a battleship is about a two-year endeavor.

That decision also influences our research priorities. Should we change any of them for now?

Finally, finances and diplomacy. Tensions are low right now, and our budget is in near-perfect balance. At 6%, our research spending is a little low. It might be wise to increase that, as ships come off the ways and money becomes available.

That’s all for this first update. This being Christmas week, I’ll plan to do the next update the first Thursday in 2020.

It’s an even more eclectic week here at Soapbox World HQ than usual.

All told, a nifty system, and one with a number of seeming practical advantages. Also, I love the idea of a fusion power plant being bulky, spiky, and loud. (All those pistons hitting a steel sphere…)

Given that last week was Thanksgiving, you might have expected last week to be the short edition. That’s where you’d be wrong! We were both on the road, and neither of us did much of the linkable sort of reading.