I got a chance to play a game of Little Wars with our very own parvusimperator last weekend, taking advantage of the slightly larger amount of floor space available at his apartment to bring out the printed scenery and the expanded armies I’ve been working on since the last game. Since it’s parvusimperator’s baptism by fire, we decided to play without any extra rules, Original Wells style. So, without further ado…

The Battle of Chopinburg House

The red and blue armies meet at the ruins of Chopinburg House, a manor on the Continent destroyed in an earlier battle, and a vital point in the local road network. 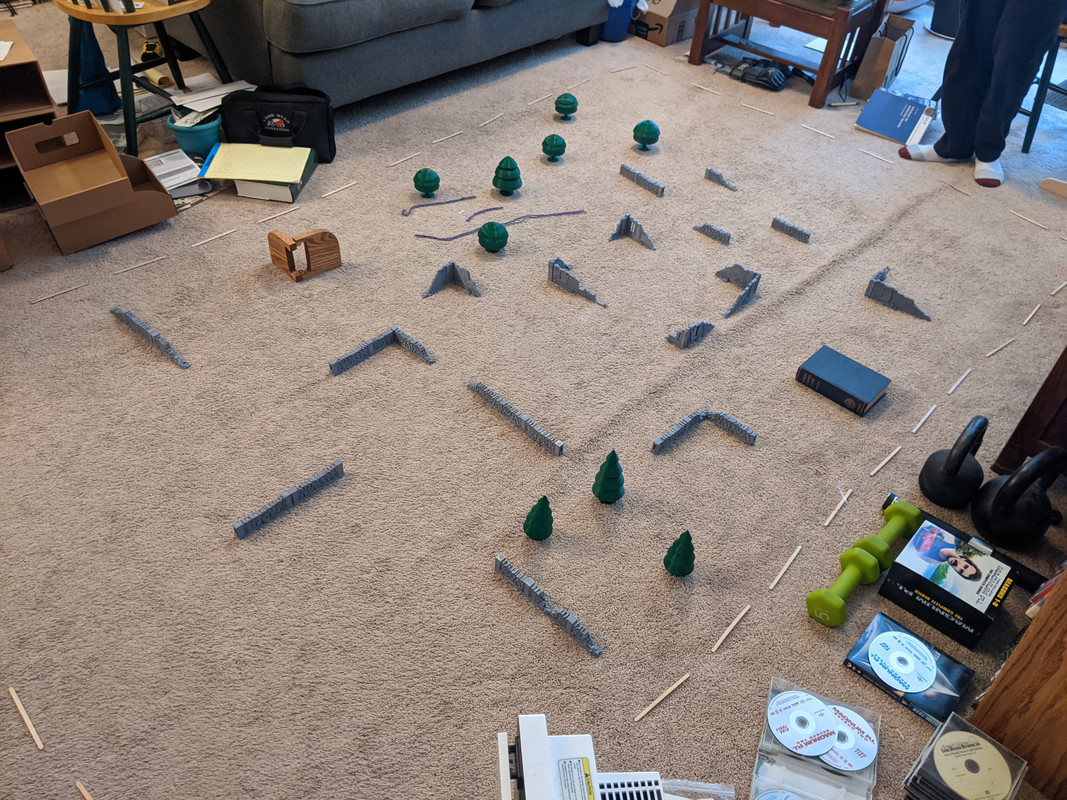 North is to the upper right. I’m controlling the red forces; parvusimperator has the blue. 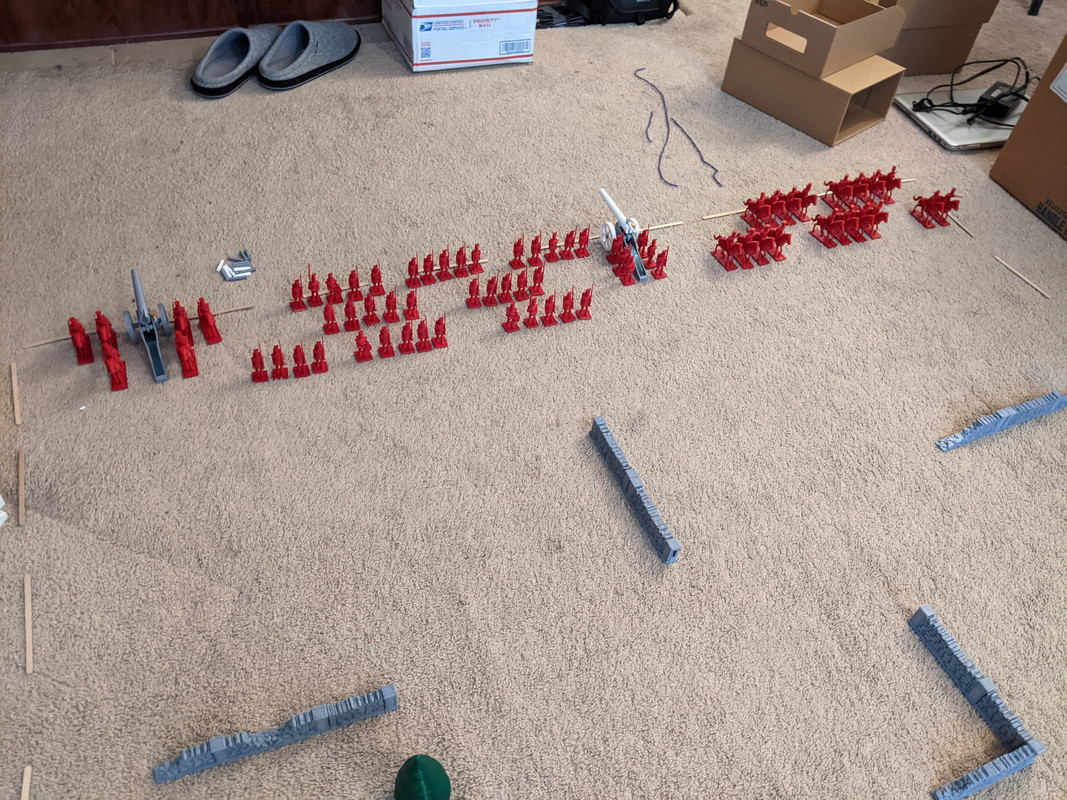 The red forces deploy in what’s becoming my traditional formation: infantry in staggered files to make a harder artillery target, cavalry striking force on the left, one unit of horse artillery and one of foot artillery. 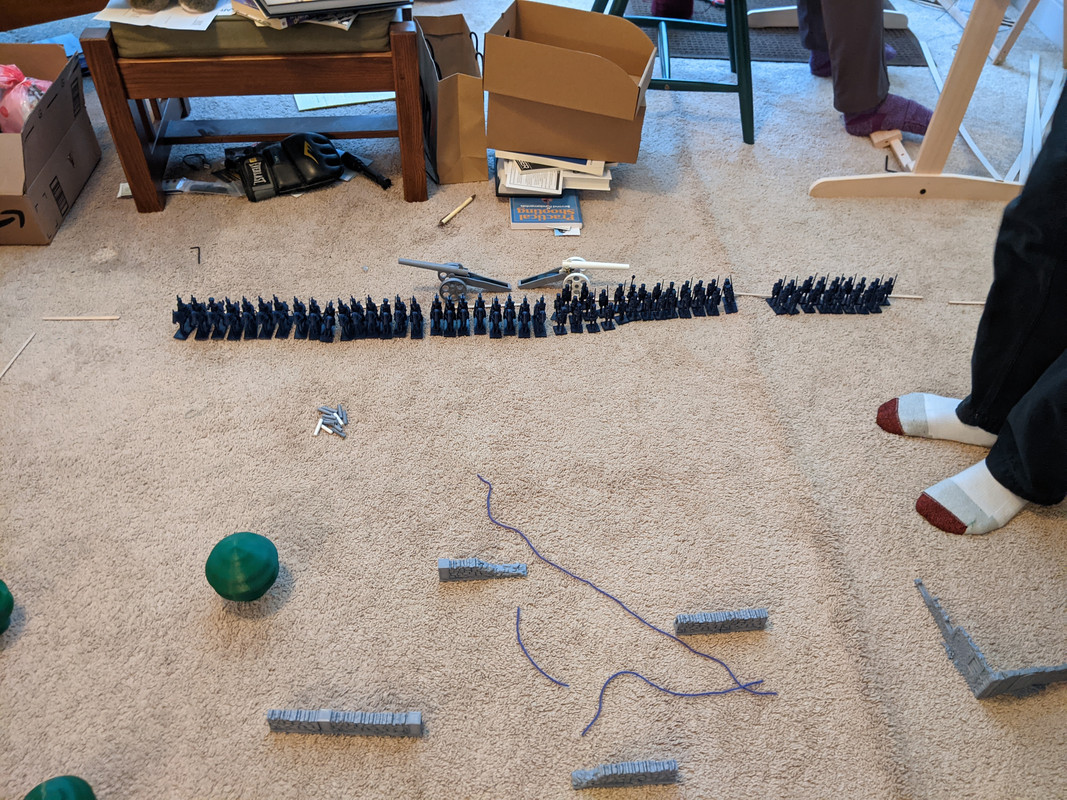 Parvusimperator’s deployment is ‘blob’, which is faster to set up and doesn’t make much difference beyond aesthetics. His cavalry is largely concentrated on his right, opposite my left.

My opponent, given that this is his first game, let me move first. 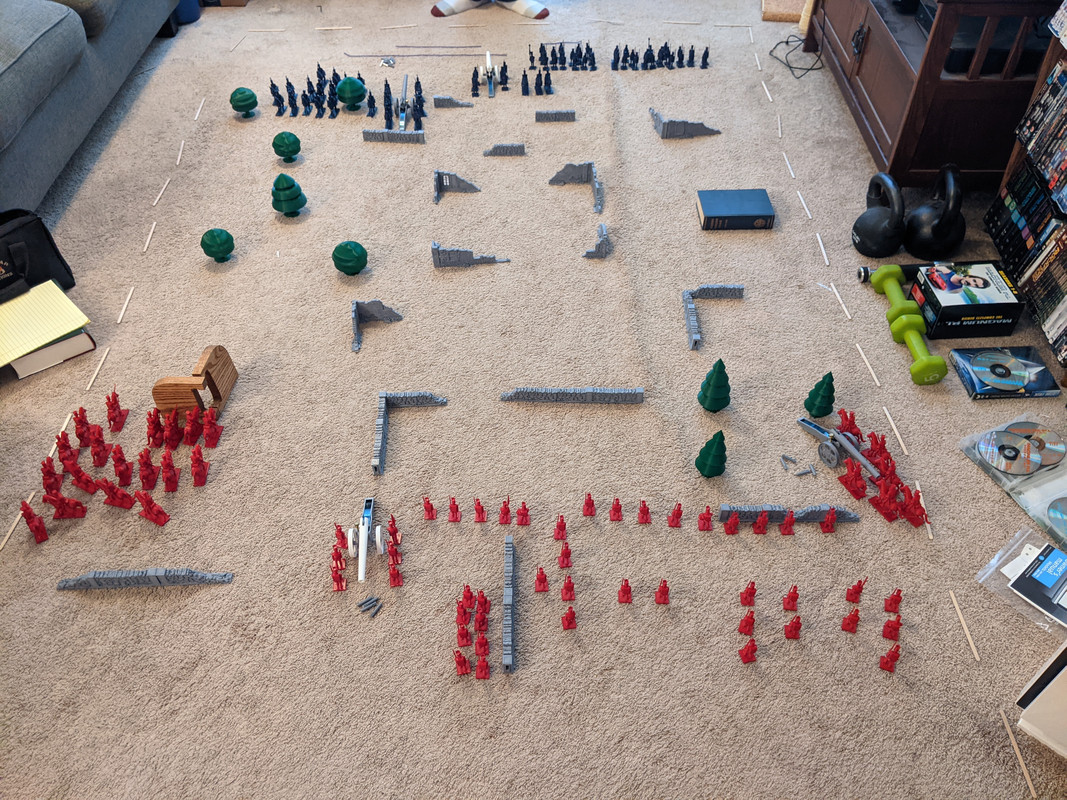 One and a half rounds in, I’ve moved twice and parvusimperator has moved once. My artillery has reached the positions where it’ll spend most of the game: my horse artillery gun, on the strength of its faster movement, takes up position in Chopinburg Wood, while my infantry gun sets up in the southern fields. 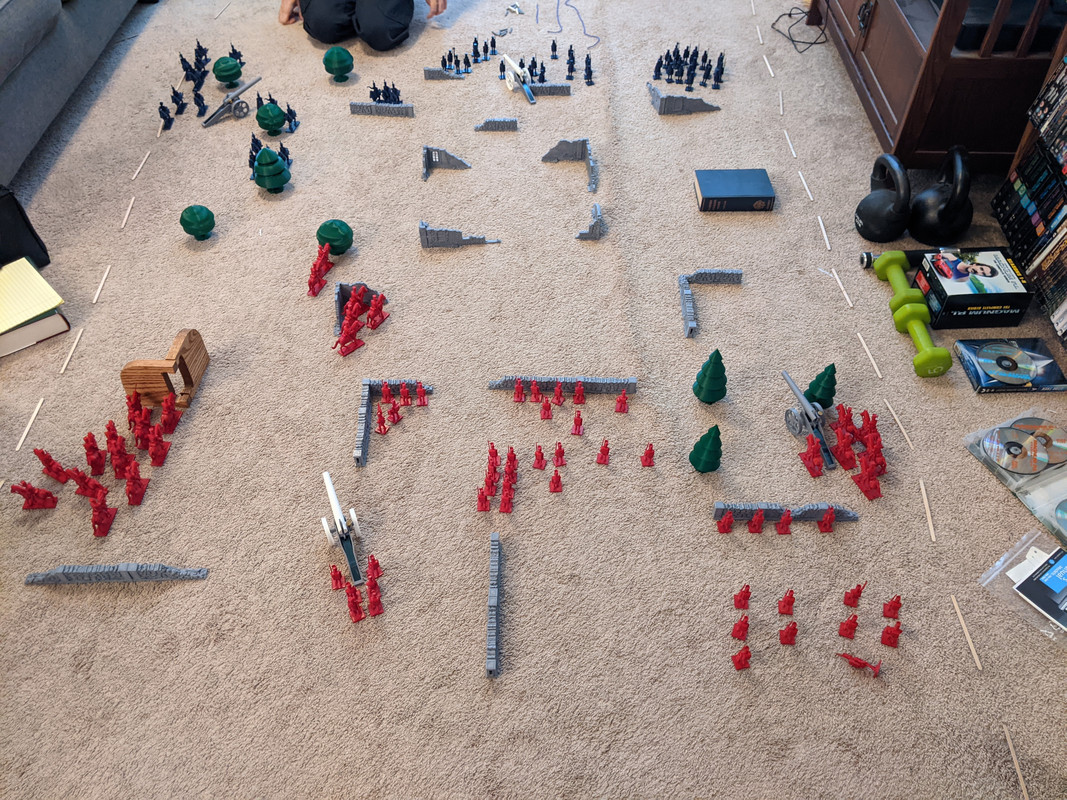 This picture is two turns later, halfway into round 3: parvusimperator has had two turns, and I’ve had three, so my artillery has opened up. Lucky shooting on my part knocks out a number of his cavalrymen on my left, while the gun in the wood hits a few of his men in the northern fields. 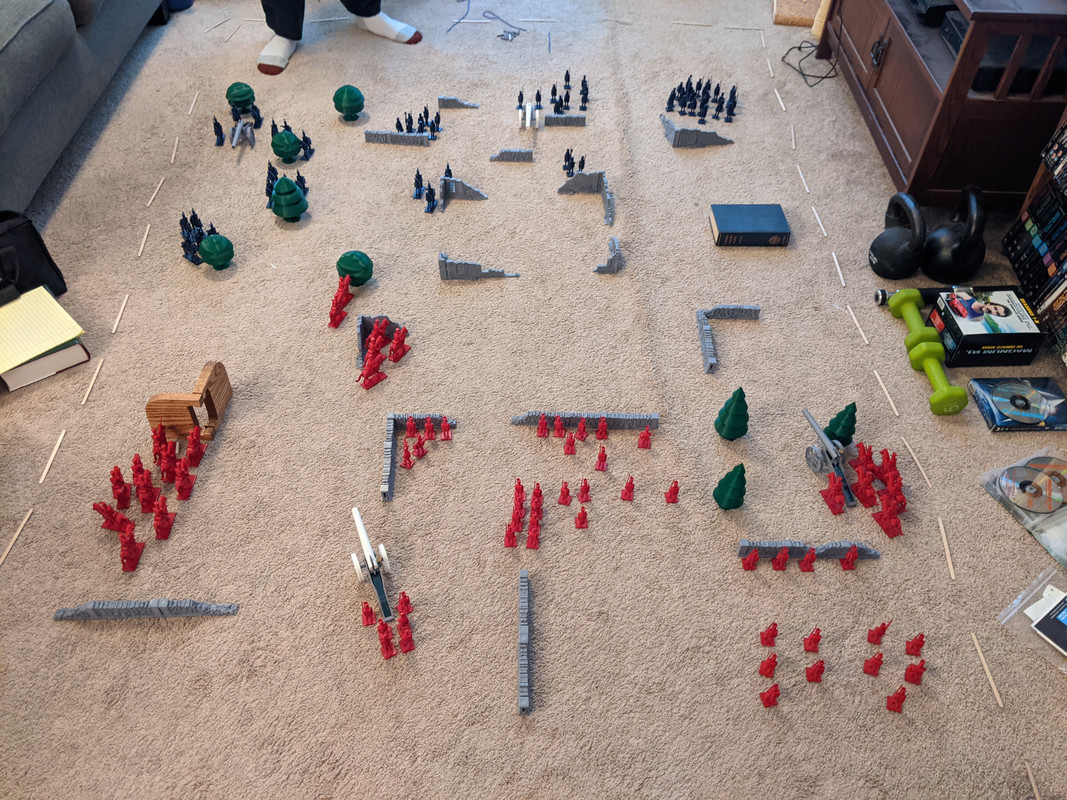 The enemy gun on my left returned fire, clearing out a few of the cavalry massing behind the chapel. Heavy but ineffectual fire from parvusimperator’s center gun hits the stone wall sheltering my center infantry repeatedly, but there are no casualties.

In the meantime, parvusimperator moves some of his cavalry up, obscured from my guns by the shelter of the orchard. 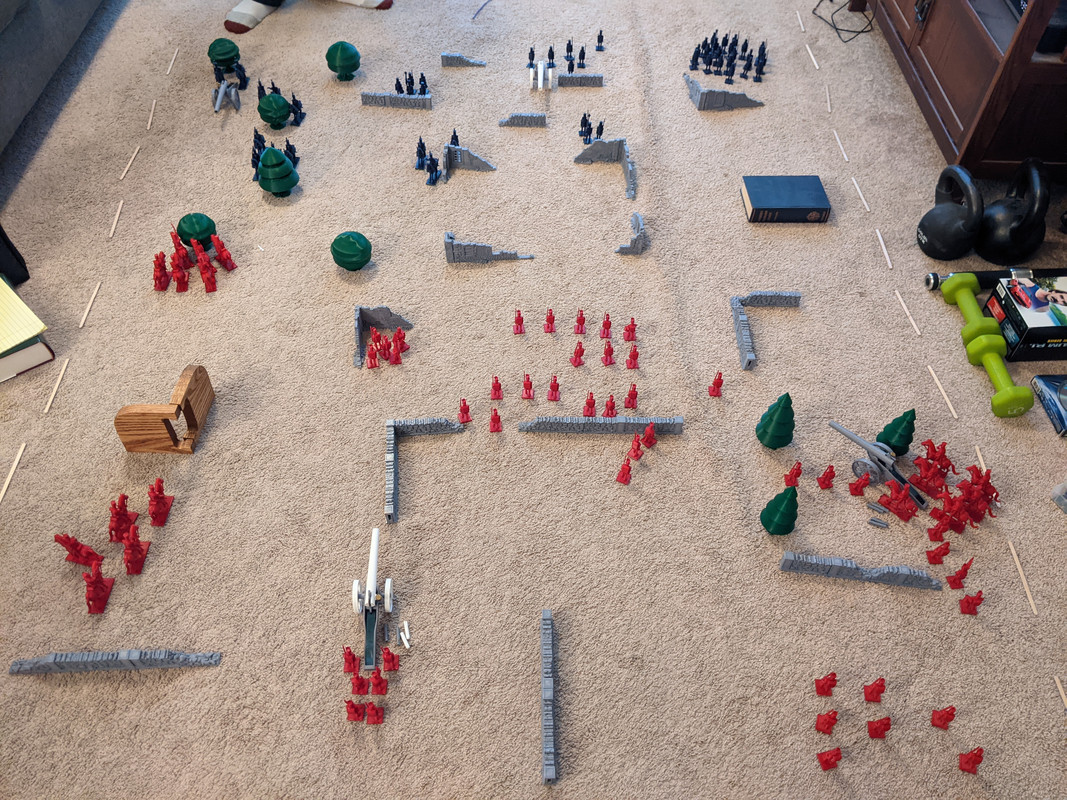 Our first melee! My cavalry at the chapel, along with the detachments that pushed forward therefrom last turn, charge parvusimperator’s squadron in the orchard, eliminating it. My artillery has a poor turn, only accounting for a pair of infantry. 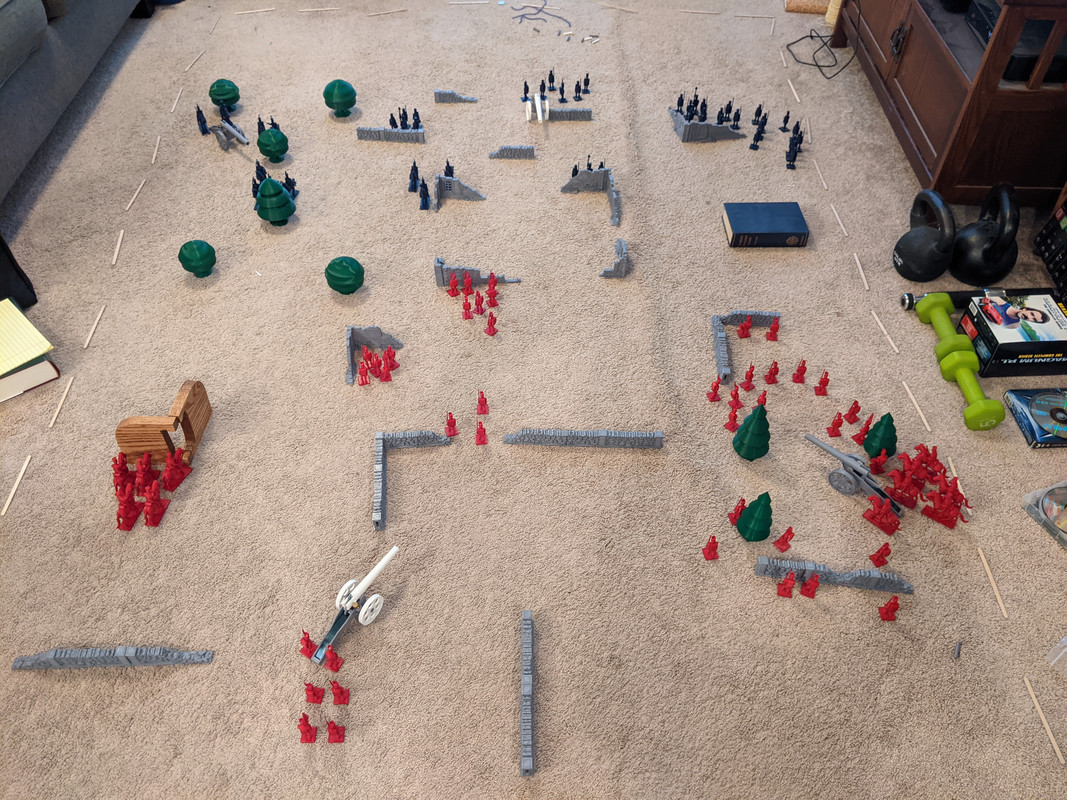 From the last photo to this one, it’s a gap of two turns again. Parvusimperator has begun to advance on my right, sheltered from my guns by the eastern outbuilding. My center gun did take some shots at the advancing blue infantry, but had little effect.

The biggest story of this round was the utter annihilation of my advance cavalry force: parvusimperator’s center gun, with a single shot, took down five horsemen, domino-style. My five remaining cavalry on the left hunker down behind the chapel, while my center infantry advance toward the manor proper, taking cover as the blue guns turn in their direction. I’ve begun to move men north of Chopinburg Wood, arraying them to meet parvusimperator’s impending attack. 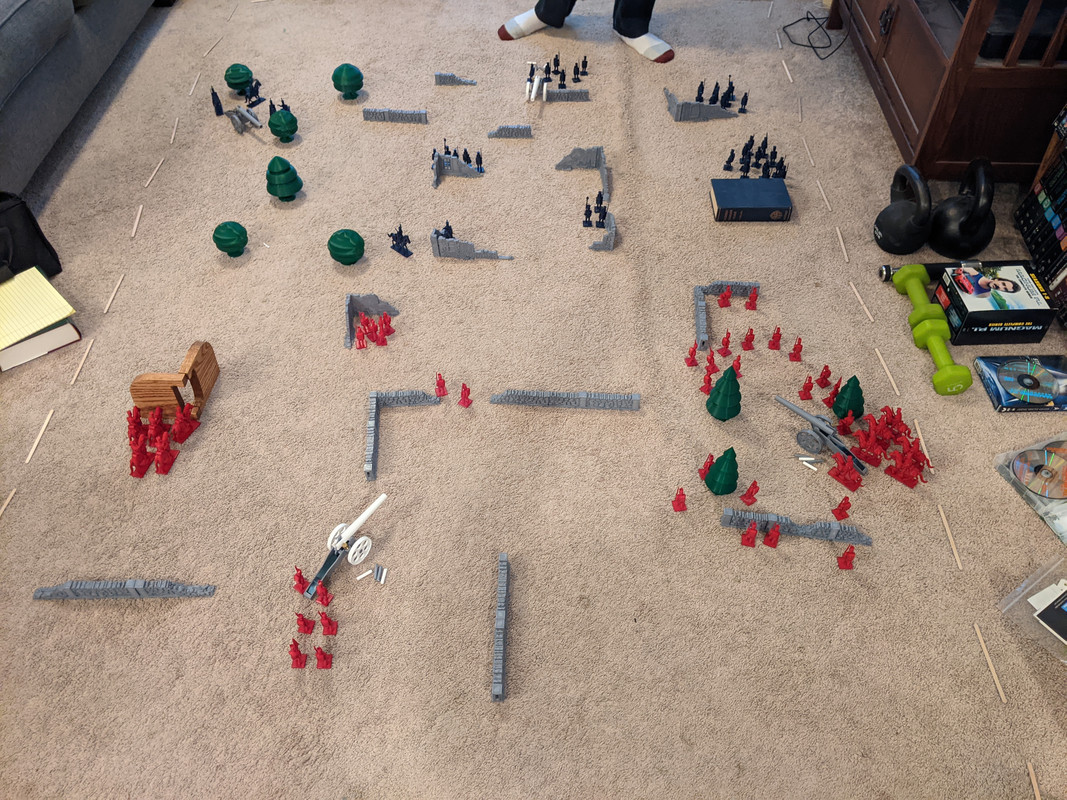 Another melee: parvusimperator’s cavalry at the orchard and the northern wall of the ruins charge my infantry at the southern edge of the manor, after artillery fire weakens them sufficiently for the charge to succeed. On the other flank, his infantry gather behind the outbuilding at Chopinburg House, preparing to advance on my right. 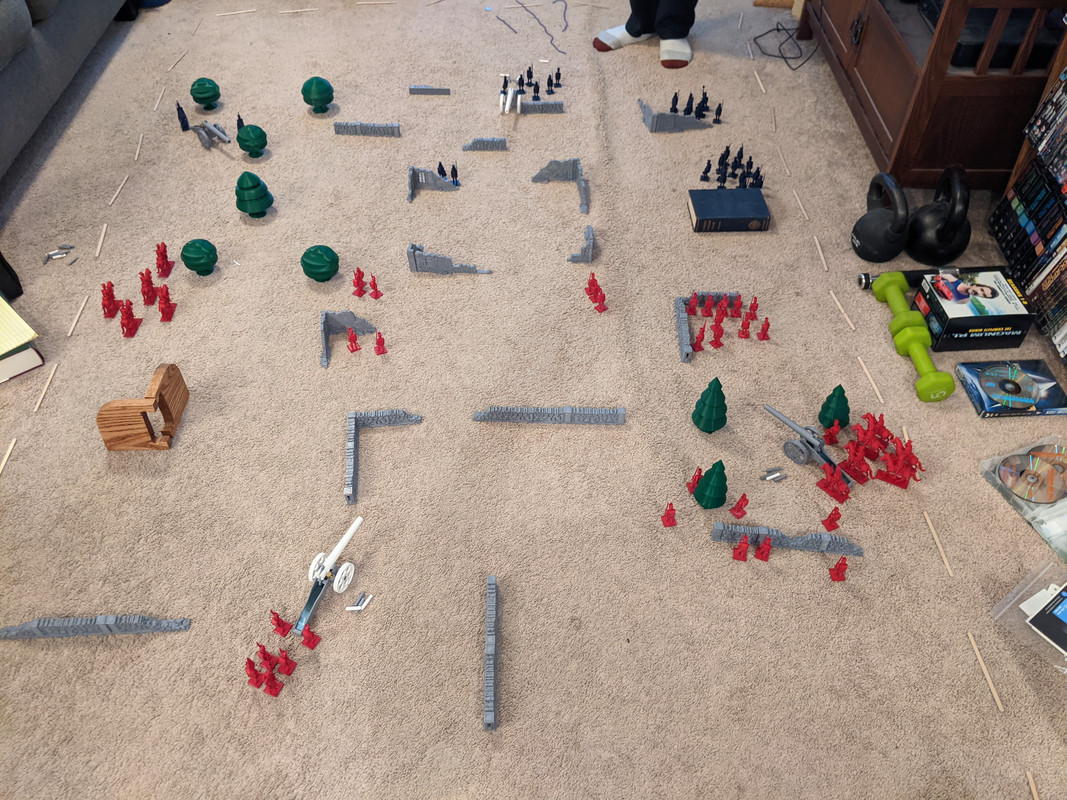 My artillery opens the turn with a key victory: my gun in Chopinburg Wood disables the enemy gun in the orchard. My other gun chips in by taking out parvusimperator’s detachment advancing through the ruins, hitting individual infantrymen three of four times—accurate fire!

With the gun in the orchard out of action, I’m free to do two things: first, my cavalry at the chapel makes a run for it, hoping to reach and capture parvusimperator’s orchard gun. Second, my infantry sheltering in the southern outbuilding charge parvusimperator’s two remaining cavalrymen who made the attack last turn, killing them. 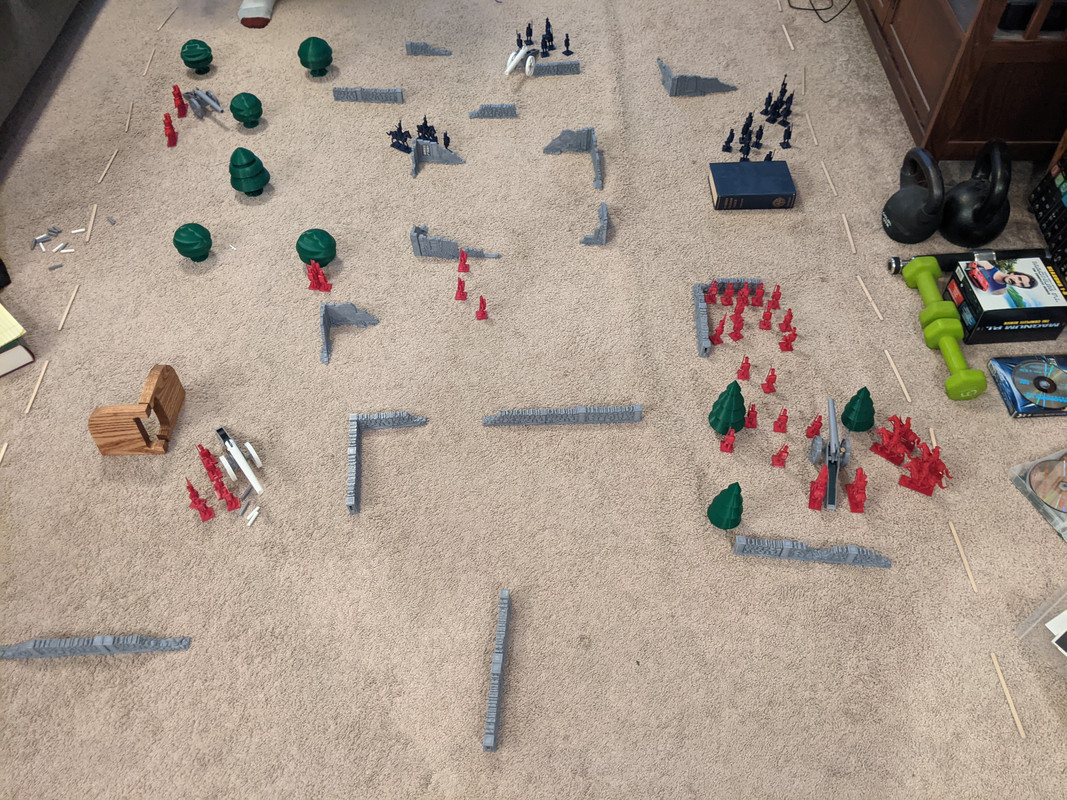 Regrettably, I missed taking a picture after parvusimperator’s turn again, so this is another two-turn gap. It’s also where we decided to end the battle by mutual agreement.

Parvusimperator’s center gun, which earned its keep many times over, hit three of my five cavalry moving on the orchard gun. Even so, he decided to withdraw: his cavalry on the gun were badly placed, far enough apart so that I could engage one without engaging the other, and sheltered from the center gun to boot. My gun in the wood, with some very careful aiming, managed to put a few shots into the infantry massed behind the eastern outbuilding, reducing their strength to the point that parvusimperator no longer felt comfortable making an attack into the teeth of the gun. We tallied the forces on the field, and I emerged the victor with a score of 67 to 35 (counting the partially-captured gun for half).

At this point, neither of us thought we could push our advantage to a decisive victory. According to Wells’ rules, I could have made him play out the retreat, giving myself the chance to reduce his forces further. This would have been deeply unsporting, however, since I realized that I never actually put ‘how to retreat’ in my rewriting of the rules. Oops.

Here are some glamor shots of the final state of the battlefield, followed by some analysis. 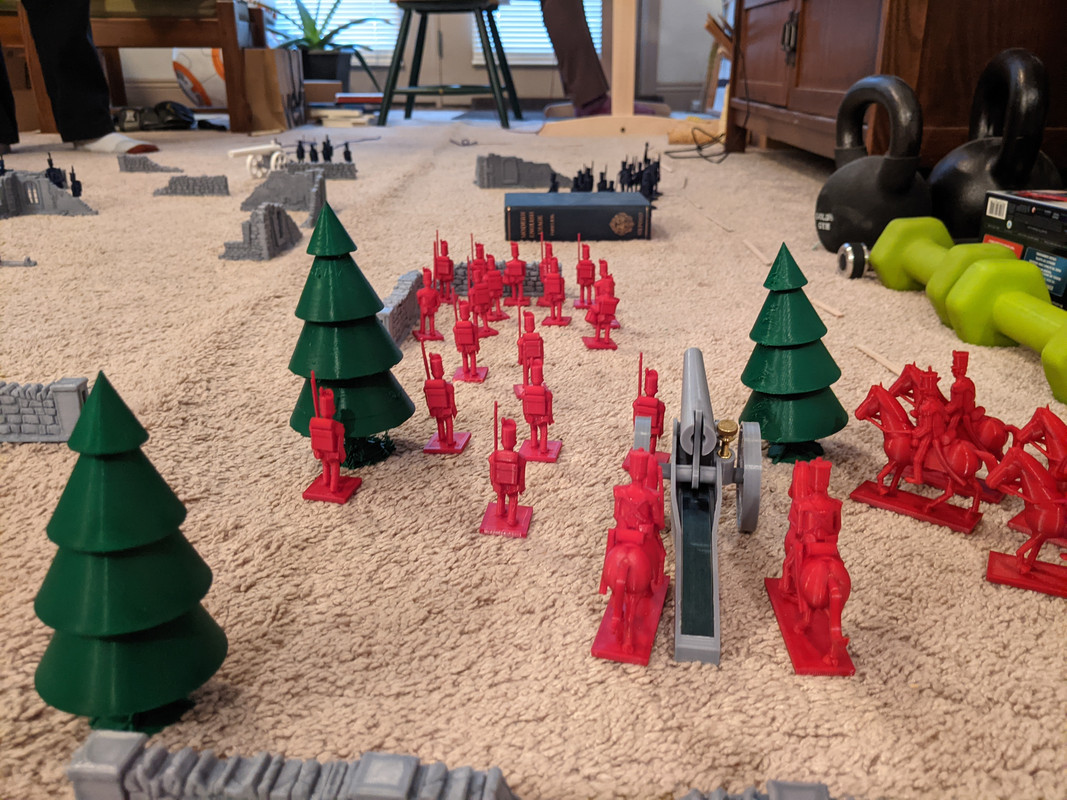 Looking north from my position in Chopinburg Wood, the bastion that survived until the end of the game. 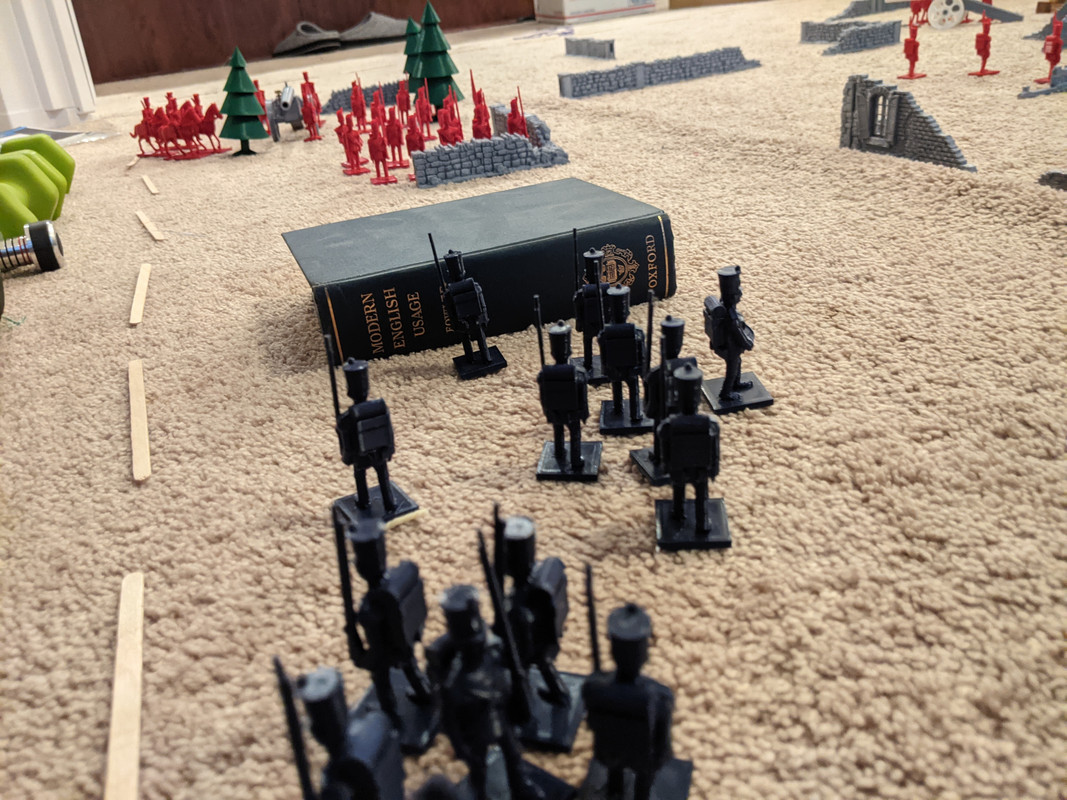 French soldiers shelter behind Modern English Usage, which we thought was funny. 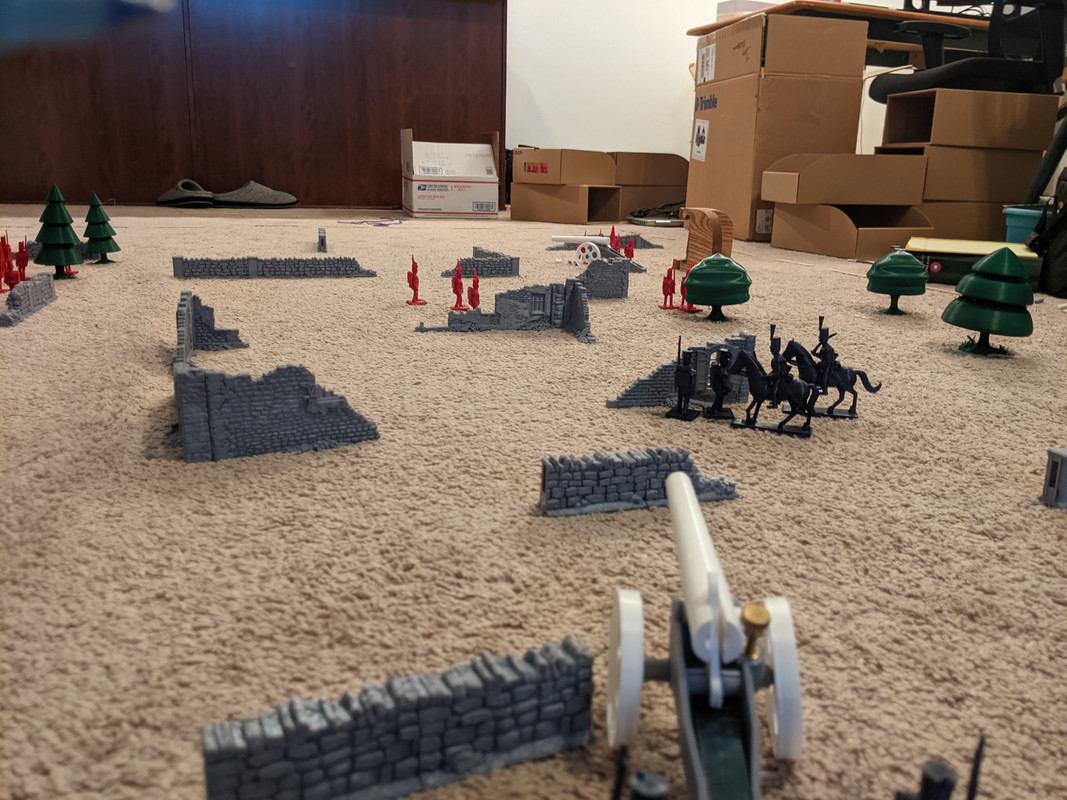 The view of the field from Parvusimperator’s center gun. A commanding position, fire from which adroitly and repeatedly stymied my attempts to assault in the center and down my left.

This is the first game I played where we reduced the turn time limits as men were killed. As it turns out, this is a critically important feature of the rules. On my turns through most of the game, I wasn’t able to use my cannons to their fullest and move all my men. Parvusimperator, a bit speedier, usually had a few tens of seconds left. The pressure is key: there simply isn’t time to get up and measure out a potential countermove, or who exactly will be in a melee. You have to rely on feel, which is a kind of randomization.

Cavalry still feel a little wimpy. They’re massive artillery targets, and in making their bases narrow enough so that frontal cannon fire can knock them over, I made them poorly-balanced enough so that they’re at risk of domino effect, one knocking the next over, if hit by enfilading fire. The cavalry charge rules will certainly help to some degree, although the rifle fire rules might count in opposition.

It also feels a bit strange that infantry can charge cavalry and bring them to combat. I’m not quite sure if or how to fix that organically.

The printed terrain pieces were fantastic. The stone walls provided good cover to men in proximity without being impossible to shoot over, and the trees and ruin sections helped break up artillery sight lines without promoting quite the same amount of hiding all your men behind the largest piece of cover.

Cover being decent but not perfect was a major contributing factor to the number of melees we saw: it was much easier to get men in close in sufficient quantity than it has been in battles past.

In rereading Little Wars before this battle, I realized that the forces we fought with are very similar to those in Wells’ example Battle of Hook’s Farm. There, two forces of 48 infantry, 25 horse, and 3 guns fought; here, the forces were 45 infantry, 24 horse, and 2 guns.

45/24/2 felt like a near-perfect ratio to me: the cavalry got into it in the early stages of the battle; infantry held positions and occasionally made attacks; the guns were important but not so much so that they overwhelmed the importance of maneuver.

If I want to do limited ammo, I think I probably need to have a stock of 25 or 30 shells per gun. It should be expensive to bring that much artillery firepower, but given the four-shots-per-turn limit, it’s entirely possible to use that many if your guns are well-placed.

We both remarked that limited ammo would have led to some extremely interesting choices: some of the shots we took were pretty low-percentage, especially early in the battle, and if we had to count shells, we might have skipped some of it, leading to more action in the mid-battle rounds.

I have strategic location variants written in the rules right now, but I’m not sure if there’s a place for them, given further thought. In Wells’ rules, the battle ends when one side retreats or is entirely eliminated. That doesn’t leave much room for divvying up victory points based on real estate held.

On the other hand, ending battles like we’ve done so far, with one side offering the other a truce, eliminates retreats from the game, and managing a fighting retreat seems like the kind of skill Little Wars ought to reward.

I wonder if there’s some way to combine the two: a two-stage battle, say. If one side holds an advantage in strategic locations for N rounds, it’s won the day, and the other side must then retreat from the field. Worth some thought.

The largest battle Wells mentions in his book is hundreds of soldiers on an eighteen-foot front.

Today’s battle was played on a front of about 5-6 feet, with a depth of 10-12 feet. Given furniture, a 12-foot front with 9 feet of depth is possible at my house, maybe a little more if we move things around.

The very largest room I have access to is at my mother’s house, if we move a couch and a table, and is maybe 12 by 12, given the furniture we can’t move. I’d love to play on an 18-by-12 field someday (in teams, perhaps, to keep turn times from getting too out of hand), but I can’t think of anywhere I could do that for free beyond maybe my driveway (impractical, because I wouldn’t want to pit PLA against south-facing blacktop) or the lobby at my church (not impossible, but I don’t know if I’d call it plausible).

I suppose I could also try the clubhouse at one of my shooting ranges.

Even though I spent a bunch of time just now thinking about ways to make the game better, that doesn’t mean it isn’t already good. The two people I’ve played with so far have both been nearly as enamored with it as me, and neither one said, “You know, once was enough.”

Time to get the printer working again, I guess.

4 thoughts on “The Soapbox Plays: Little Wars (The Battle of Chopinburg House)”