Quarantine continues, as does the war.

Our modern light cruiser Linois, patrolling the Mediterranean for Italian raiders, happens upon one of Italy’s ancient (1900-era) Nino Bixio light cruisers, and quickly sends it to the bottom.

Not only does this choice give us prestige, it might keep Italy in the war long enough for our current shipyard efforts to come to fruition. 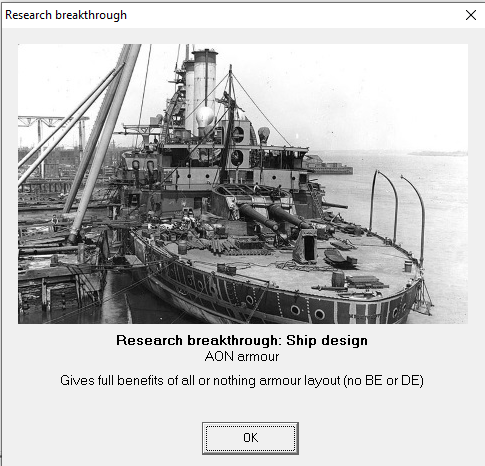 Research has now advanced to give us the full benefit of something I’ve been doing all along (leaving off the belt end and deck end armor for weight reasons).

Loire has a clear winner as far as torpedo bombers go: 90-knot speed, range of 77 nautical miles with a torpedo and 141 when serving as a scout. As soon as it enters service, I’ll start setting up our airbases with slightly fewer flying boats and fighters, so we can start covering the Mediterranean better.

It’s time for a new fighter prototype, too; speed and range seemed like the most broadly popular priorities.

Italian submarines sink a pair of French destroyers; we’ll have to build a few more (now with depth charges and AA guns!) when our near-term projects (a light cruiser, the Amiral Charner CVL conversion) finish.

In a strong gale in the central Red Sea, Tourville and a trio of old light cruisers, supporting the invasion of Eritrea, attack an Italian convoy with supplies for the defending troops. The only ships the Italians have here are armed merchant cruisers; though Tourville is no longer quite the ship she once was, she’s still more than capable of sending 13 merchants to the bottom in the space of about 20 minutes.

Our torpedo bomber enters service. I start pushing it out to our various airbases. It appears that we’ve developed dive bombers as well; once the current fighter procurement process winds down, I’ll start on one of those.

Regrettably, the war ends before the shipyards can quite clear their backlogs.

To save a bit on new destroyers, I embark rebuilding my ancient ones. The Francisques and Fauconneaus were valuable parts of my trade protection strategy; if I’m going to keep them around, I might as well spruce them up a bit.

On the matter of new ship classes, I’m going to hold off until January 1920, when oil trade becomes widespread enough for me to build oil-fired ships despite not having any oil locally.

Loire wins again on fighters. Time to get a dive bomber design under production.

Correction: nobody’s actually figured out dive bombers yet—the aircraft types dialog lets you filter by types you can’t build, presumably so you can see other countries’ attempts at same—so that’ll have to wait.

The very brief period of French dreadnought superiority is quickly coming to an end, since the war ended the naval treaty and the British and Germans (and Americans, for that matter) are free to kick their battleship programs back into high gear.

For example, this German ship is tremendously scary.

Light on AA, though.

Two major inventions this month: director-controlled firing for secondary batteries and light cruisers, and dual-purpose mounts for 3″ and 4″ guns. The next battleship is going to be brilliant. 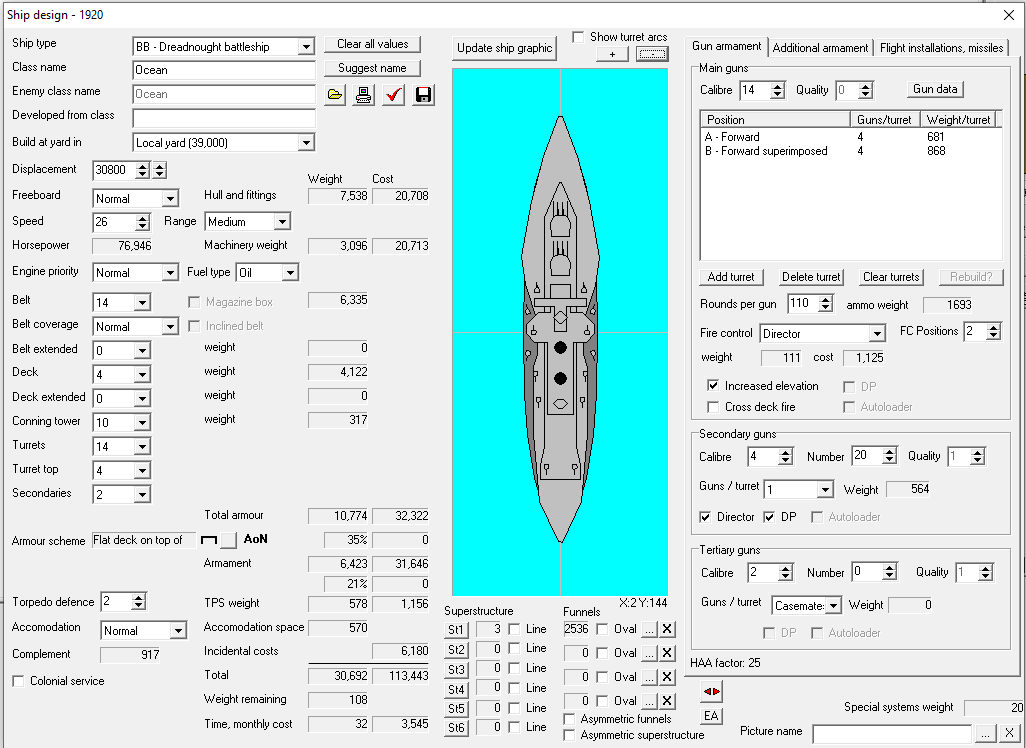 Named after one of our predreadnoughts, the Ocean class has 8 14″ guns in two quad turrets forward (a French specialty!), better armor than her German opponents, and 26-knot speed. Her secondary guns are director-fired, dual-purpose mounts, and she mounts a number of light AA guns around her superstructure as well.

Why eight guns instead of twelve? It saves about 500 funds per month, and given that we’re very limited in our battleship construction for budgetary reasons, it makes sense to reserve a bit extra for light forces.

I decide it’s about time to scrap the old Trident-class predreadnoughts; now that there are new battleships in the offing, our next few targets for conversion will be Tourville and Dunkerque.

The first Ocean enters production, and will arrive in 32 months. Given peacetime budget constraints, we’re likely to be on a one-ship-per-class diet for some time to come.

All quiet this year. We host an international regatta, reducing tensions, and join an international squadron sent to contain violence from a revolution in Africa, bumping our budget up somewhat.

There are seven of our new Flamberge-class destroyers in the shipyards now, along with Ocean, and we just worked out how to do purpose-built aircraft carriers. I’m going to see what I can do for a CVL design.

Our CVLs can carry at most 34 planes, which we can do, plus anti-air guns but sans armor, for 1,800 funds a month over 20 months. That’s more aircraft at a lower cost than our Gueydon conversion.

All’s well. Our budget, at 20,158 per month, is about a battleship per year below its wartime peak, and we’re 218 funds per month in the black (with seven destroyers and one battleship under construction).

Our prestige is 48, a new peak for us. Tensions are low across the board.

The fleet is in good shape. We have eight ships classified as battleships and two as battlecruisers, although I would hedge that by saying that only five of those are first-line ships now (the two Redoubtables, Requin, and the two Rouen-class battlecruisers), and the Redoubtables will be obsolescent soon. Our dreadnought ships are, however, either new or recently rebuilt, so we should have them on hand for a good little while.

We have a pair of heavy cruisers of reasonable efficiency for the first time in a while, the 27-knot, 8″-armor, 9″-gun Montcalm class.

In light cruisers, we have nine obsolete ships, largely on foreign stations, but they’re small and still relatively cheap to maintain. We have ten new-model light cruisers, with more centerline turrets and 27- or 28-knot speed. They do, however, predate anti-air armament, so we’ll have to fix that eventually.

We have one aircraft carrier at present, the converted Amiral Charner, and two seaplane carriers, Seine-et-Marne and Savigny-et-Temple. In terms of air power generally, we’re on top of the world leaderboard, with 272 fixed-wing aircaft and 24 zeppelins. We have a good network of air bases across the Mediterranean, including on Corsica and Sardinia to threaten Italy, and in Greece and Libya to contain Austria-Hungary.

Finally, we have 41 destroyers in service and 7 more coming soon. Somewhat more than half of them are modern, with speeds in excess of 33 knots, lots of torpedo tubes, and three or more guns. The remainder are recently-rebuilt old ships, which will play the corvette role in future wars.

There are a few things we might want to consider doing as we roll into the 1920s.

So, what should we make our priority for the next few years? Something from the list above? Something else entirely?