With social distancing in full swing and last week’s break, I had plenty of time for a two-year update, and it’s an eventful one.

Four ships go into the yards for a rebuild: Tourville and Dunkerque, the two remaining Duquesnes, along with Redoubtable and Marengo, our second-generation dreadnought battleships. Per a reader note, we have the time and budget. The Duquesnes, for whatever reason, will be in for a year—perhaps being overhauled because of their age?

I’ll issue the ultimatum to Italy; they’re nearby, and we can totally take them.

Tensions are high, but not to the breaking point yet. I order the rebuilding of our battleships accelerated.

French naval engineers have managed to come up with a quality 9″ gun, which means it’s time for a heavy cruiser. 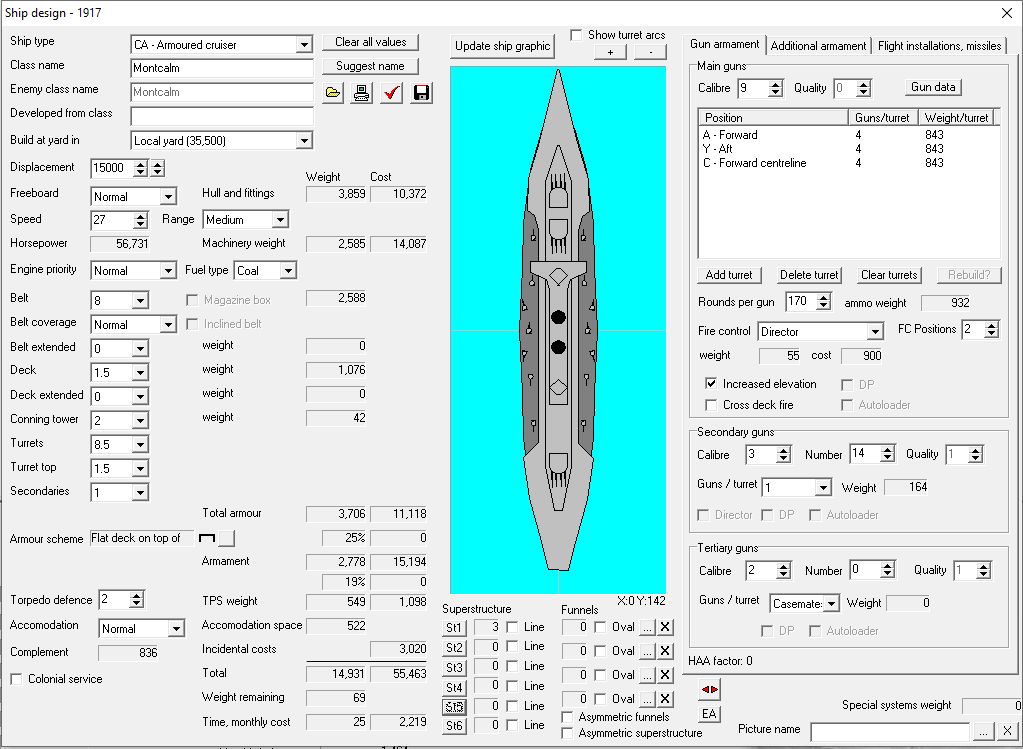 Thoroughly modern-looking! We’ll have to get a few into production.

No change on the tension situation, but with design studies now complete on the Montcalm class, the first one enters production, with the next to start in August.

Just in time for a new ship class to enter service and most of our battleships to finish a rebuild cycle, we develop anti-aircraft guns.

The first battle of the war: a raid on enemy coastal installations. It’s just after midday. One notable new thing is the presence of aviation elements: floatplanes from our airbase on Corsica, zeppelins from the base at Tunis (which could stand to have an airfield, I think). 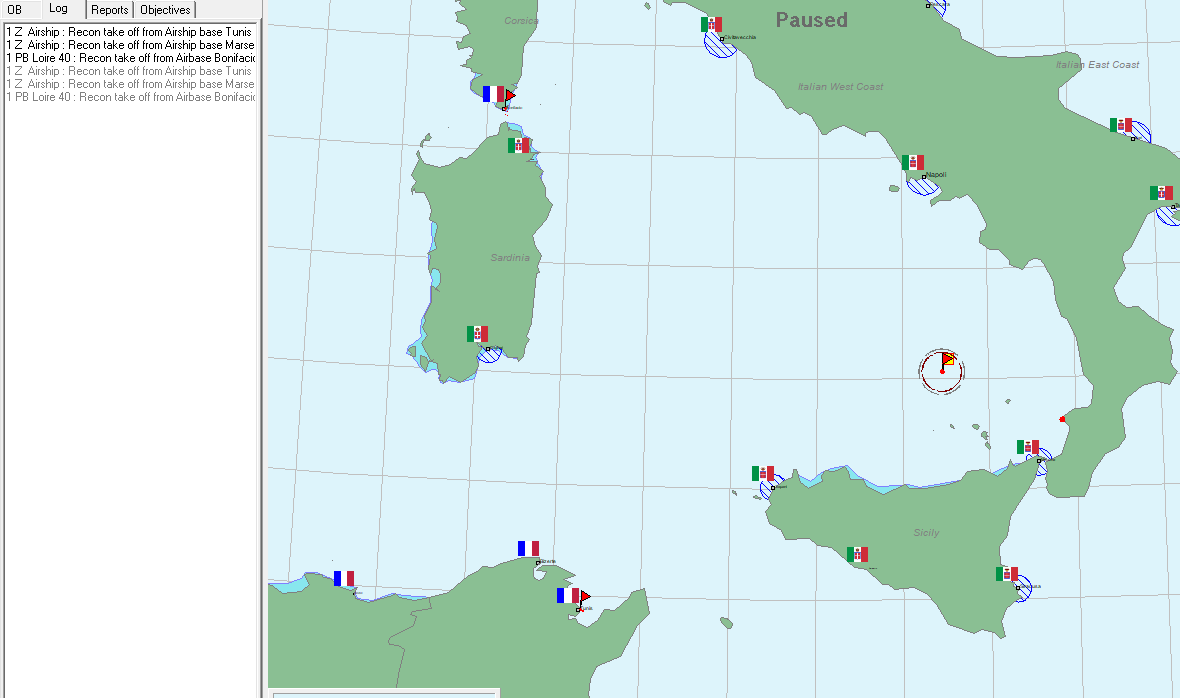 Our forces are the fast battleships (ex-battlecruisers) Lyon and Marseilles, each armed with 6 15″ guns and capable of 24 knots, escorted by five destroyers.

Happening upon two old armored cruisers, the Lyons, unblooded in the last war, prove their worth quickly. Seven hits on one of the Italian cruisers and eight on the other prove sufficient to sink the two old ships.

Either French gunnery or French technology has improved sufficiently to score hits dealing critical damage to the enemy at something like 20,000 yards.

The enemy fleet was out in force, however, and when the fog of war lifts at the end of the battle, we find them not too far behind us. 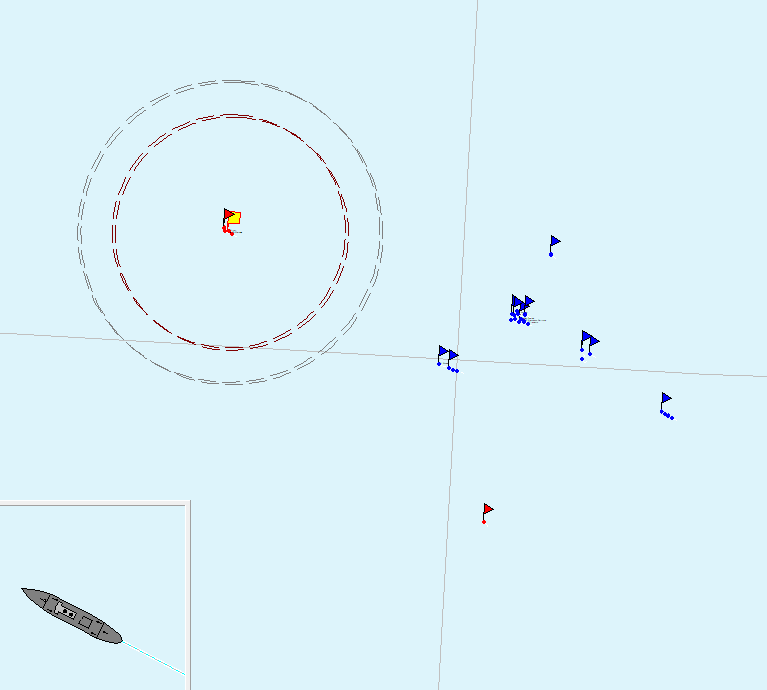 The Italians decline a fleet battle—probably the right move, in view of our overwhelming superiority.

And again, they decline a cruiser battle.

The French fleet sorties in response to an Italian coastal raid. It’s a beautiful morning, and the enemy is in sight. 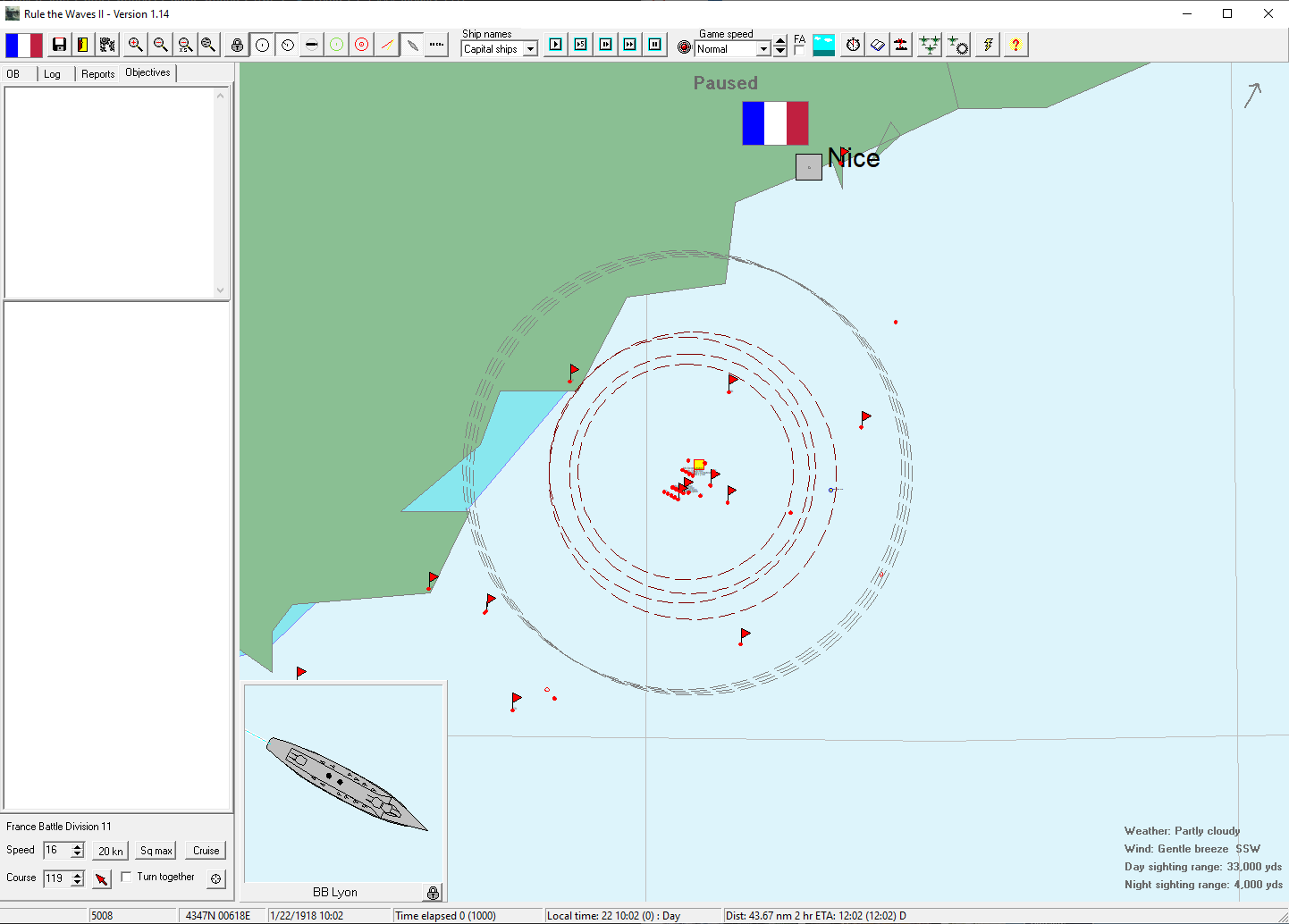 The Battle of Nice

On the field today are eight French battleships (four of which were originally battlecruisers, reclassified after their last rebuild), one battlecruiser in the scouting force, a bevy of light cruisers and destroyers, and a number of aircraft. The weather is partly cloudy with a gentle breeze out of the southwest. 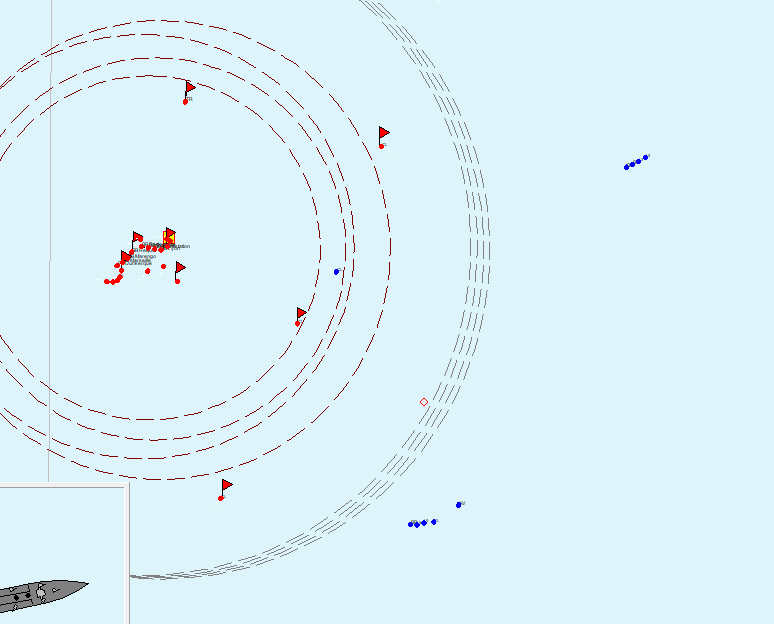 The situation is already favorable: the Italian fleet is divided, with the battlecruisers to the east of our fleet and the battleships to the south. As I recall, the Italian battleship line is slower than our own, so that’s where my focus will be at first.

In the final reckoning, it goes down as a boring battle. The Italians are faster than we are all around. Their battle line escapes. We sink an old pre-dreadnought, exchange a lot of shells to no great effect, and turn away as the Italian fleet does the same, both battered, none reduced.

Except that’s not what happens. Overnight, on the 12-knot journey back home, we come across one of the Italian Francisco Ferruccios, which blows up in a flash fire.

Then, shooting between our scouting force and our main force comes the entire Italian battlecruiser squadron. 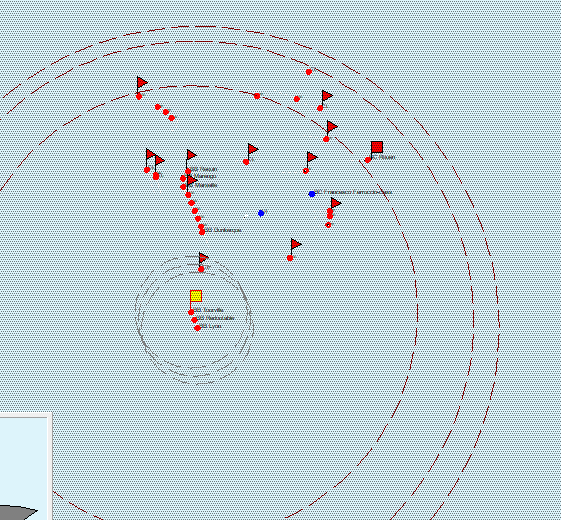 The carnage is incredible. At the end of the day, all four Italian battlecruisers lie on the bottom of the Mediterranean, against zero French warships lost. Merest happenstance made it happen—the Italians, pushed to the southwest, made a high-speed run toward the coast to attempt to evade us in the night, and chanced to run right into us, at the range where our superior number of destroyers gave them no chance to escape. 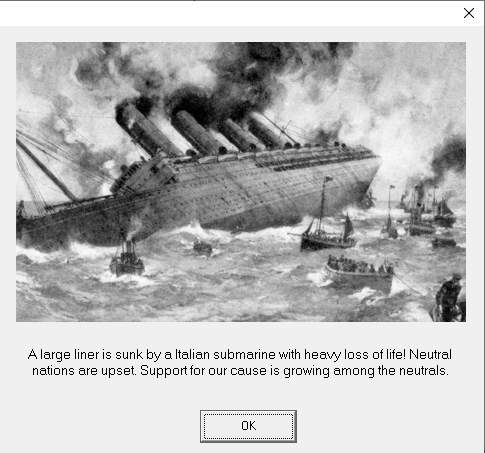 The month’s battle is a coastal raid; the lone French battlecruiser Rouen takes a little jaunt in toward Italy, supported by a division of three battleships, blows up a bombardment target, and returns to Nice. Another thousand victory points, nice and easy-like.

Italy being close to France, we’re actually within invasion range. We’ll target Sardinia, which would be a wonderful feather in our cap and a second unsinkable aircraft carrier in close proximity to the Italian coast.

Evidently, the invasion planning process is faster than I had hitherto realized. It’s the early afternoon of March 29th, and we’re approaching the western coast of Sardinia with an invasion force in tow.

I’m going to have to mark this one up a bit. 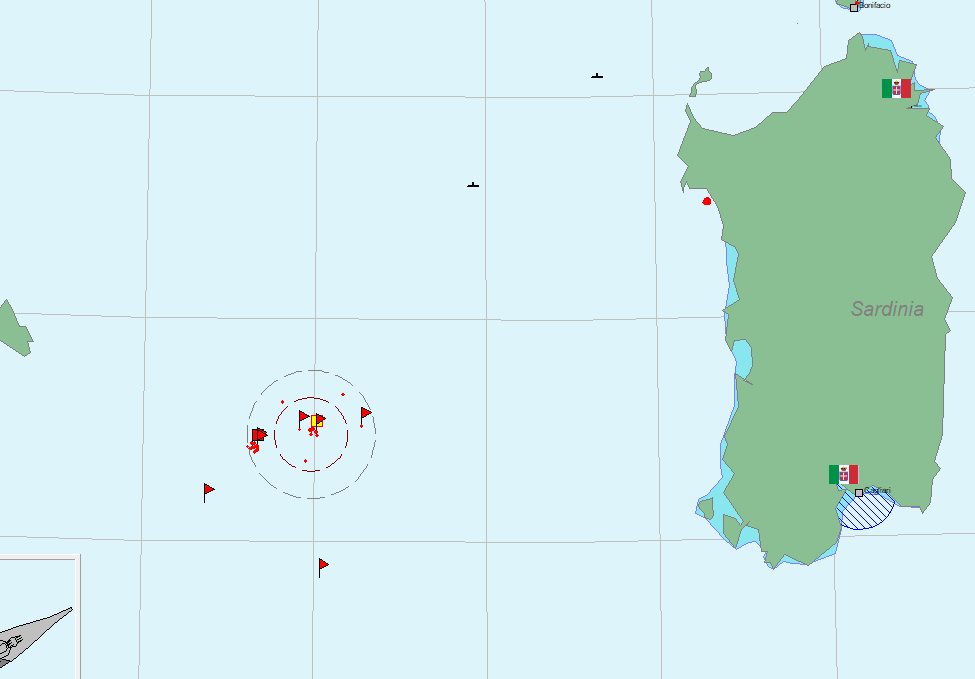 Update: I forgot to mark it up before uploading it. I’ll just have to be better at describing things. 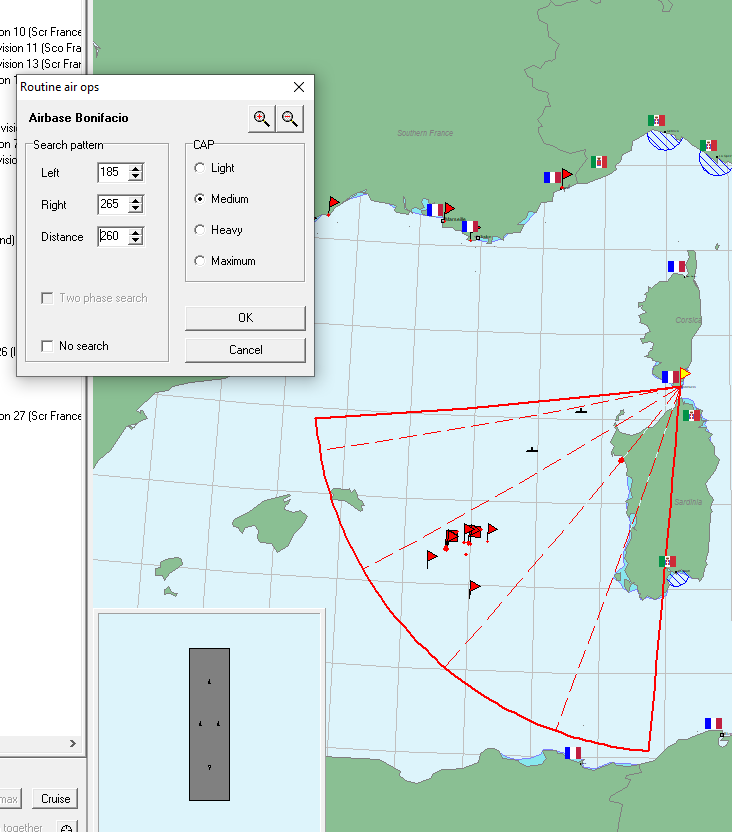 New things to worry about: aerial scouting! Ordinarily, the defaults are good enough, but in this case, with the enemy’s likely approach routes well-defined, I’ll tweak things a bit to see that we catch them.

The two forces under my direct command (the main force and the scouting force) split off to the north and east of the northeastward line of advance the transports will have. They’ll form a sort of search line, keeping the sea between them in visual range while positioning themselves to make a quick dash to the flanks if need be. 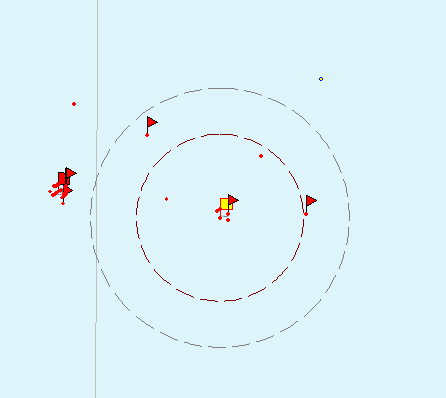 Aerial reconnaissance being, in 1918, rather a slow affair, our ships spot the enemy first.

At this stage, the goal is to find and engage the enemy before dusk, after which he’ll have a much easier time of getting in among my transports. Rouen leaps forward, turbines whirring up to speed as she accelerates to her maximum 27 knots. 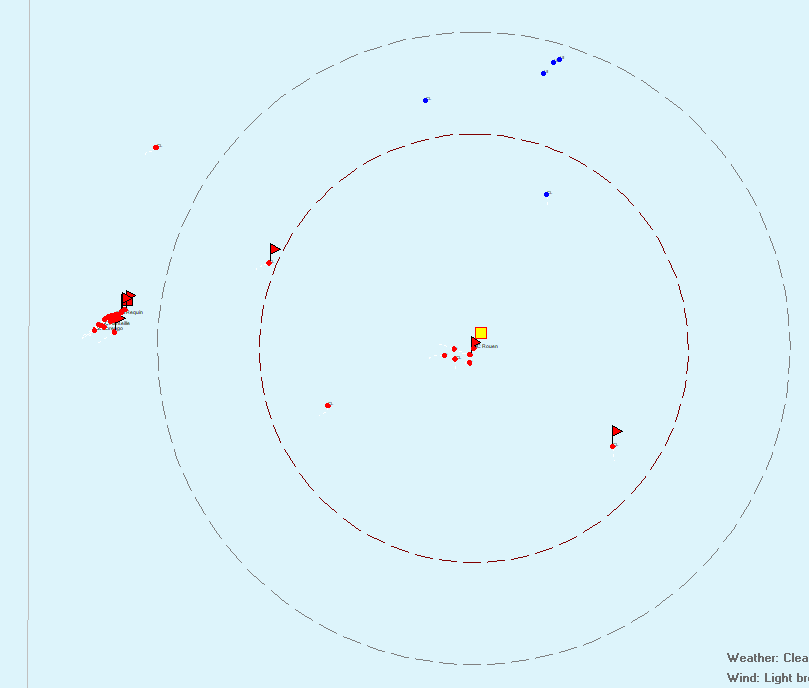 What passes for the Italian battle line comes into view. Rouen opens fire, aiming to pass to the east of the enemy battleships, where she can keep tabs on them into the evening.

Requin scores with her first volley.

These Italian dreadnoughts are of the Andrea Doria class, rough contemporaries with our Duquesnes. They’re armed with ten 13″ guns, and can fire a maximum of eight of them broadside. Our Requin, though it only has 12″ guns, mounts twelve, and can fire all twelve at a broadside target.

Armor, however, is where we really look smart. Requin has a 14″ belt. The Andrea Dorias have 9.5″. Even Rouen, our notional battlecruiser, is more heavily armored. 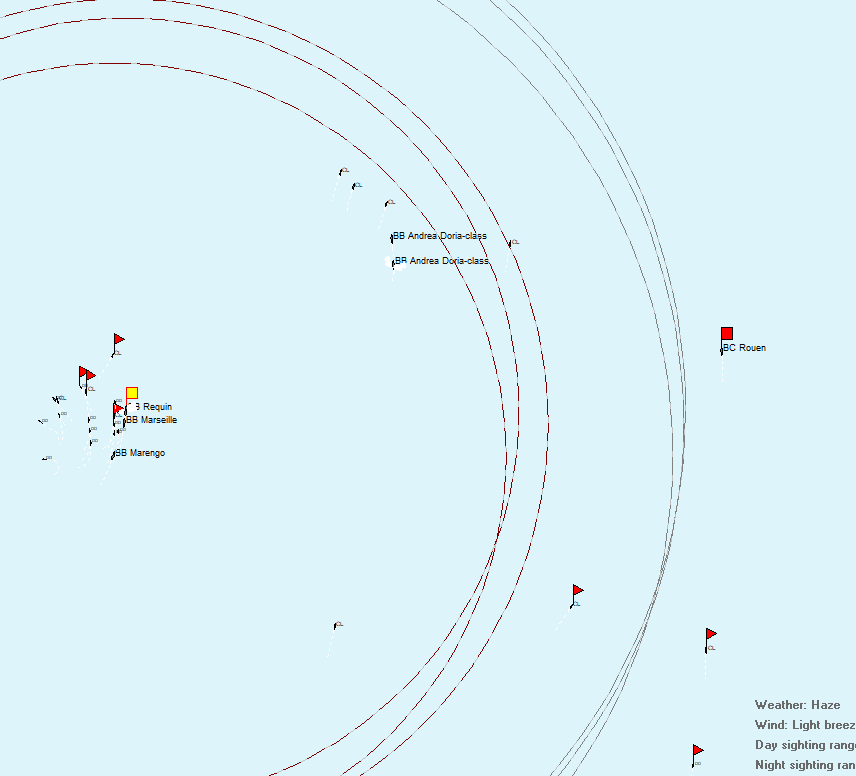 The fleet is nearly perfectly placed for this battle, running on either side of the Italian ships at long range. Although Marengo can only make 22 knots, the rest of our fleet can keep up with or surpass the Italian dreadnoughts in speed. 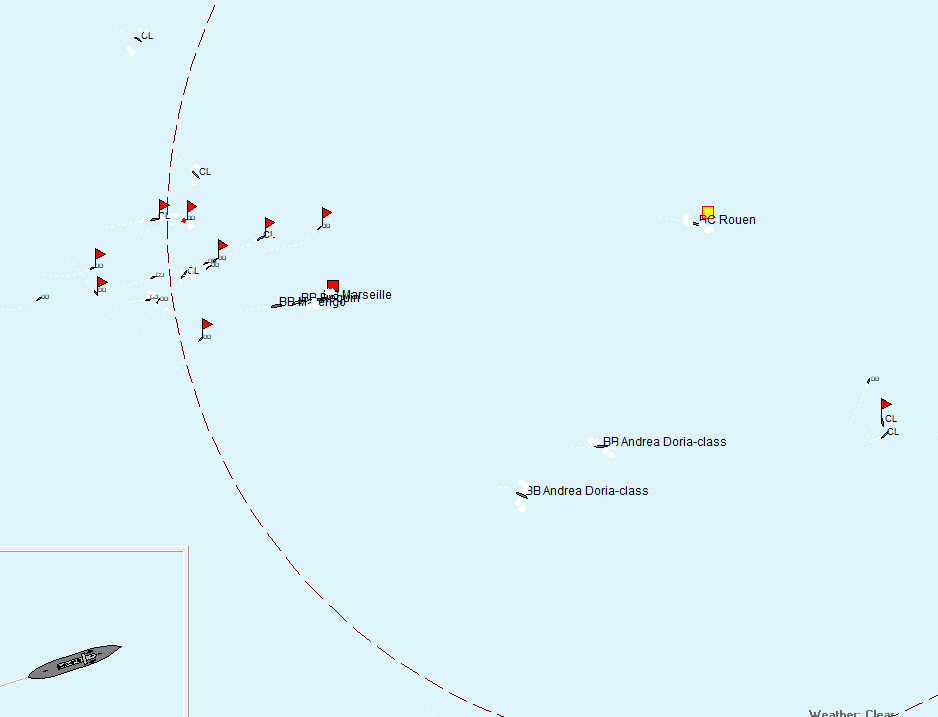 The Italian light cruisers, off to the northwest, try an attack on the battle line. We’ll see if they manage to get through the screen.

The Andrea Dorias are both down to around 10 knots now.

One of the Andrea Dorias goes up in a flash fire. At 5:53, the other follows in the same manner.

Night sees the remains of the Italian fleet scatter. We manage to find the transports, taking up station on either side to cover them through the night. 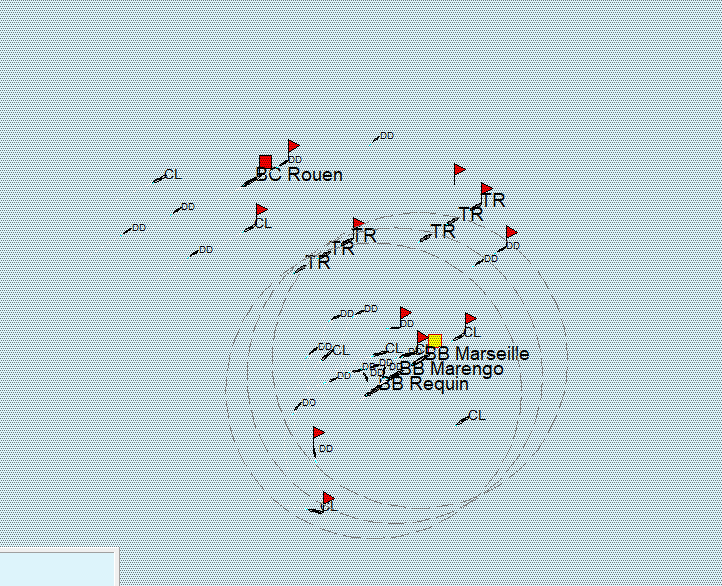 The invasion is in progress. Soon, hopefully, Sardinia will fall.

The invasion doesn’t take long to bear fruit. Sardinia is ours.

Stubbornly refusing to surrender, the Italians lose a pair of light cruisers to Rouen, who proceeds otherwise unopposed on a coastal raid.

Well now, what’s all this about? And, in news concerning the unluckiest name in the French Navy… 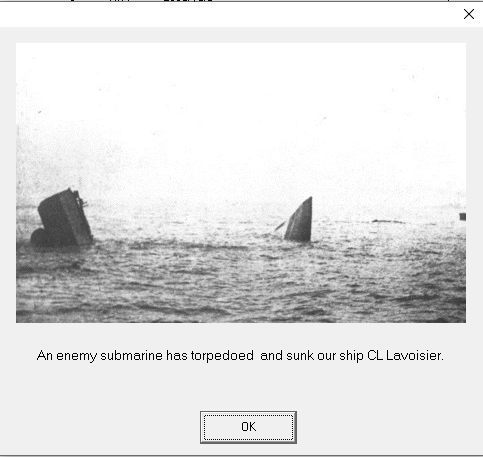 This is the third Lavoisier lost in combat. Who wants to skipper the next one?

Now that CVLs are on the table, our last Gueydon class (Amiral Charner) gets a rebuild as a light aircraft carrier. Replacement machinery increases her speed to 26 knots, and she has room for an air wing of 22. She’ll be ready in a year.

Tensions are on the rise with Germany, but the sympathy of the world is with us.

A quiet month; the Italians don’t even bother stopping a raid on their coast by a pair of light cruisers.

The Italians move to raid the French coast, at which time the French fleet comes out to play.

In particular, Rouen comes out to play; the battlecruiser is as fast as the Italian light forces, and easily sends them to the bottom with accurate fire from her 12″ guns.

Rouen and escorts attack an Italian convoy, which is defended by a single destroyer. Thirteen merchants sink.

Two light cruisers raid the boot of Italy, coming within about twenty miles of Taranto, sinking two corvettes and returning to Greece (also a French possession, if you’d forgotten).

There are rumors of falling morale in the Italian fleet.

We begin construction of air bases in Benghazi, Libya and Patra, Greece, which will provide coverage of the west coast of Italy.

I put in a request to France’s aircraft manufacturers for a torpedo bomber, something to give the air fleet some teeth. After that, we’ll update the fighters. See the end of this post for some questions on aircraft design priorities.

The month’s battle is a raid on the Italian coast. Rouen takes a torpedo, but since she’s a modern warship with good torpedo protection, she’s fine. We sink the destroyer that launched it, too.

Spies deliver blueprints of one of the Italian heavy cruisers under construction: slightly superior to our own in armament, but one knot slower.

In this last month of the update, I start planning an invasion of Eritrea, which is, I believe, the last Italian territory small enough to invade. The battle is a convoy attack, in which we sink almost the whole convoy again.

Money is a bit tight, with the invasion of Eritrea costing about as much as a low-end heavy cruiser would, but I’m not especially concerned. The fleet is in tip-top shape. Under construction is Rouen‘s sister ship, a trio of Montcalm-class heavy cruisers, one more Troude-class light cruiser, Amiral Charner‘s reconstruction, and the last of a class of corvettes designed to supplement the remaining Francisques.

Our prestige is at an all-time high.

Tensions with Germany are high, but when the war with Italy ends (provided Germany doesn’t jump in), they’ll reset.

How should those tasks be prioritized? Should any of them be dropped? Should others be added?

I mentioned something about aircraft priorities earlier. When soliciting aircraft designs, we can pick among a number of priorities: speed, maneuverability, range, toughness, firepower, and reliability. We can further pick two to focus on. Which two should we focus on?