A good start to our campaign of trade warfare: our raiders sank six German merchants and one submarine.

A British light cruiser, the Phaeton, an obsolete 21-knot light cruiser, joins Lavoisier and Isly for a cruiser battle off of Bergen. It’s 11:37 a.m., and the weather is good but windy.

Unfortunately, the German cruisers show up and the French battlecruisers do not, so the French admiral bravely turns his ship to starboard and runs for the safety of Scapa Flow. Phaeton gives it her best, but the two 24-knot German cruisers are on hand, and she isn’t fast enough to escape.

Here it is. The big one. 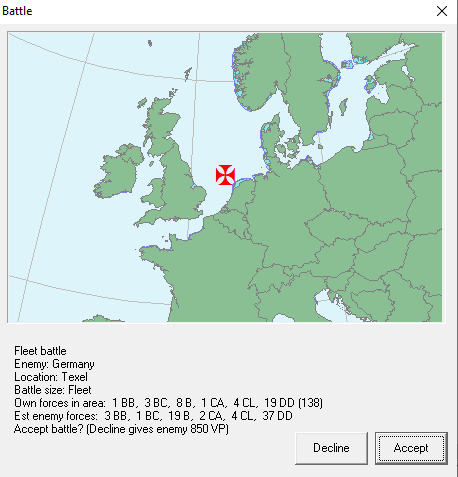 The Battle of Texel 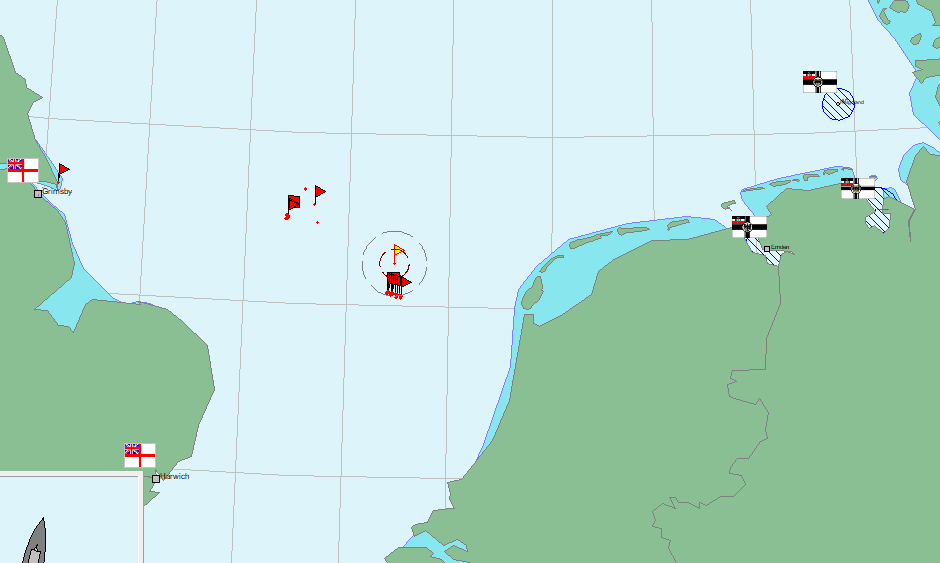 Today’s forces include the full French fleet: three battlecruisers, one battleship, our entire predreadnought force, and a smattering of light cruisers and destroyers. Joining us are one British dreadnought, the Mars, and Anson, an 18-knot predreadnought, along with their escorting destroyers.

This is the first battle in which our scouting force (the battlecruisers and the three Isly-class light cruisers) are operating separately.

The weather is good, and it’s just after dawn. Let’s see what comes of the day.

Linois, the sole light cruiser scouting for the main fleet today, spots a light cruiser to the north. It immediately turns northwest, which puts it on a collision course with the battlecruiser force. 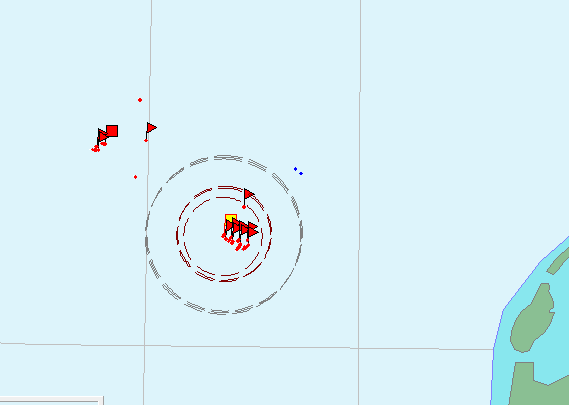 Linois spots another ship, as the battlecruisers race east. As the lines converge, our Courbet is the first to take a hit—a harmless one to the superstructure.

The lead divisions are now engaged—Devastation firing eight-gun broadsides at the German Ostfriesland, the super-pre-dreadnought from last time, leading the way. The battlecruisers slot into the battle line just ahead of the lead battle division. The Ostfrieslands leading the German line turn away, although it may just be to open the range. (Their guns reach further than ours do.)

For once, the gunnery duel in the early going is favoring the good guys—four hits to one. 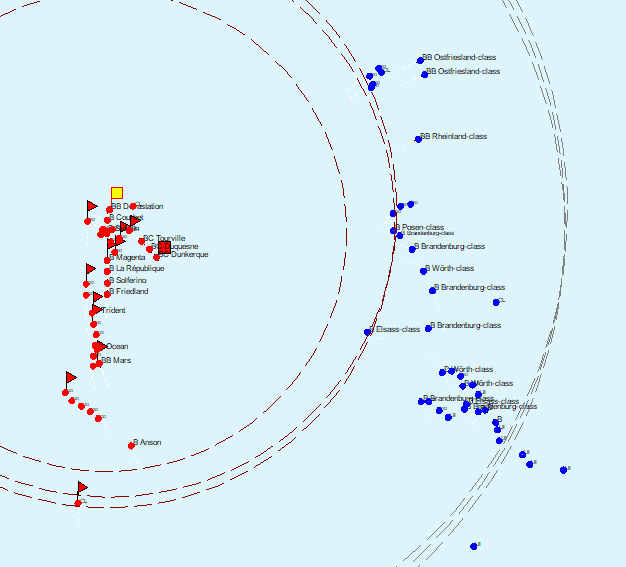 I am content to call that a smart move. The German super-pre-dreadnoughts have disappeared off to the northeast, and the Allied line is in good order while the German battleships are entirely out of sorts. 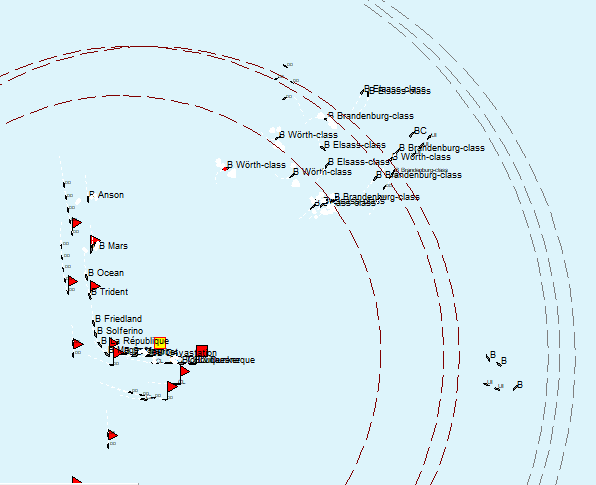 The Germans are attempting to retire from the field. Several of their predreadnoughts are heavily damaged. I expect we’ll be able to finish them off. After all, we still have… nine hours and fifty minutes before dusk.

Duquesne takes a torpedo hit and falls out of line.

Duquesne‘s torpedo hit proves fatal, but we get revenge for her with a torpedo to one of the Elsass-class pre-dreadnoughts still engaged.

A glorious victory is in progress. While the German fleet ran, we managed to peel off six predreadnoughts, which we are currently hammering with a superior force.

Seven predreadnoughts down, for the price of one battlecruiser (to be replaced next month; Lyon was delayed again) and two destroyers (cheap and easy to rebuild, although the question of when is a harder one).

Torpedoes proved critical on both sides, sinking Duquesne and contributing heavily to the sinkings of a number of German battleships. In the after-action map, you can see the critical elements of the battle: the turn to the north to parallel the German battle line, the reversal south which permitted the German super-pre-dreadnoughts to escape but allowed us to finish off a large number of the pre-dreadnoughts, and the long mop-up to the east-northeast.

The game calls it a minor French victory, on the basis that we lost a battlecruiser. I say it’s better than a mere minor victory.

To replace her on the ways, the new Requin class goes into development. On the (admittedly German) theory that the first duty of a warship is to stay afloat, she retains a 12″ armament (our quality-0 12″ guns served us in good stead in the last fleet battle, and twelve of them helps with the smaller shell). Her 22-knot speed suffices for our current battle line (lacking oil, high speed is hard for us right now), and her 14″ belt is more than enough to stop shells from the guns we’re likely to face. The weather is breezy and overcast, but patrol boats and coastal lookouts indicate that a) the German force is quite small, and b) it’s headed directly for the narrowest part of the Channel. 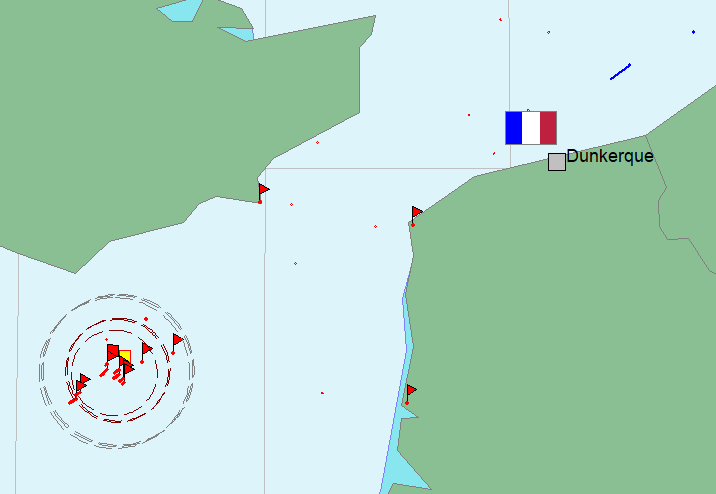 The dot in the northeast portion of the map is an old sighting report. The line is the freshest report, along with an indication of where the enemy is, provided the sighting report’s course and speed were correct.

It’s relatively early in the morning, and being so close to the solstice means we’ll have ample time to defeat the Germans if we can trap them.

By 11, it’s clear that a decent porton of the German fleet is out to play, but crucially, not all of it. I don’t think we’re going to catch the modern German ships (Ostfriesland and Rhineland, two of the super-pre-dreadnoughts), but we might end the careers of a few more German predreadnoughts if we’re lucky.

In the final reckoning, the French Navy bags all three of the predreadnoughts on the field. A glorious victory. As an added bonus, it breaks the German blockade.

In technological news, we’ve unlocked destroyers of up to 1100 tons. Perhaps a new design to replace some of those we’ve lost?

The battle this month is another fleet battle, a few dozen miles west-southwest of Brest.

Devastation is in the yards, undergoing repairs from so facing the German forces in the area are our two Duquesne-class battlecruisers (regrettably, Lyon has not finished her working up), our eight pre-dreadnought battleships, and two British dreadnoughts (Jupiter, an obsolete 6-gun/18-knot model, and Mars, a 10-gun/22-knot model which has played a starring role in multiple battles so far.)

Facing us are (probably) the two German super-pre-dreadnoughts, the remaining nine standard pre-dreadnoughts, and some light units. I’d say we have slightly better than even strength, and we’re notably well-positioned this time. We have the shorter path back to the Channel, where the German fleet would probably prefer to run, we’re downwind of them (so our smoke will blow away and theirs will get in their way), and our battlecruisers are to the north of the Germans. With the scouting force in advance of the main fleet and light cruisers spread out in a search line, La Royale occupies quite a lot of ocean.

That’s the only downside—we’re into the afternoon. Seven hours until dusk isn’t a ton, but hopefully it’ll be enough.

The scouting force catches sight of the enemy battle line. We should be able to cut them off with time to spare. 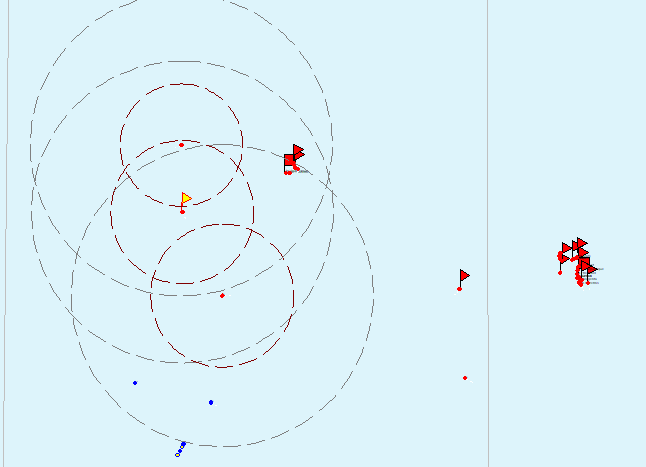 A near-textbook approach completed, the fleet closes to range and prepares to turn in line with the enemy. The German heavy units make it away, but it’s entirely possible we’ll sink most of the German Navy’s remaining pre-dreadnought fleet today. 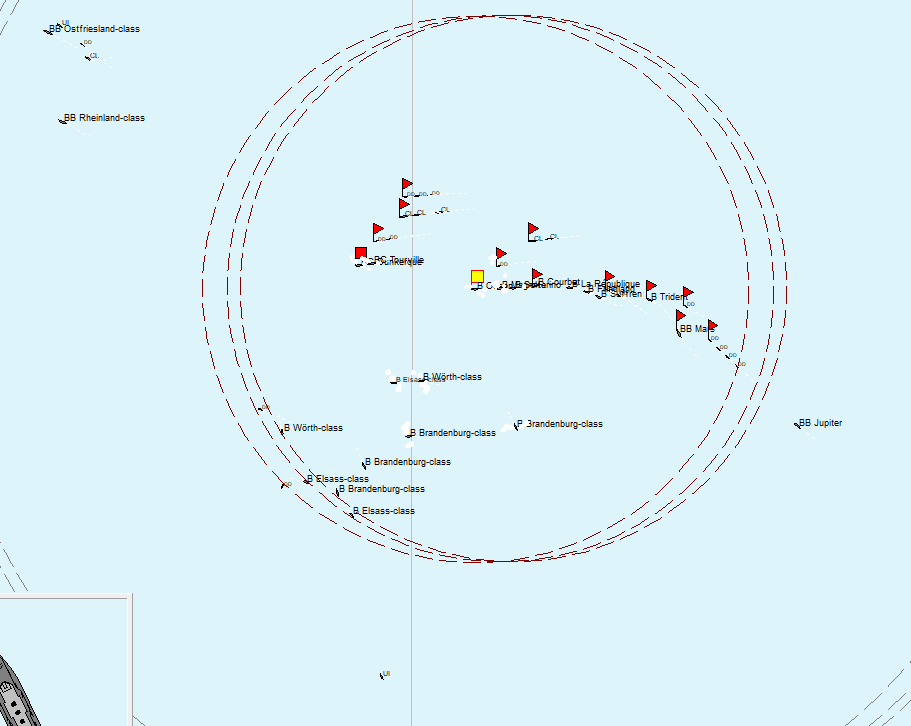 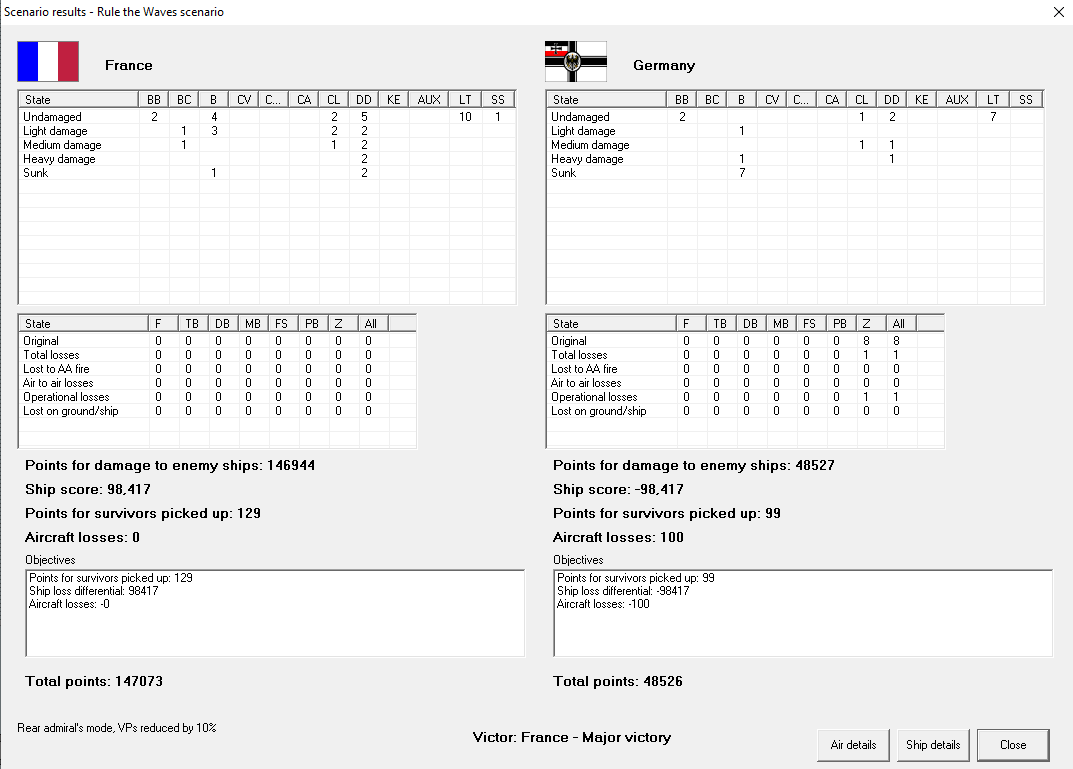 Tourville and Dunkerque, gunnery champions in the preceding battle by a country mile, are joined by Lyon in the aftermath, whose 15″ guns will give the battlecruiser squadron unprecedented reach and striking power.

On the basis that the German fleet is now, in large part, at the bottom of the Atlantic, I’m planning on sending the battlecruisers to the Mediterranean once they’ve been patched up, where they can begin to whittle down the German cruiser force, which is largely deployed there. Britain’s contributions to the war effort have been most satisfactory in Northern Europe, so between our battleships and theirs I suspect we can keep the Germans bottled up.

In terms of war goals, I don’t have designs on many of the German colonies, which are all outside of our invasion range anyway. My primary objective is to impose debilitating reparations (which has never backfired for France re: Germany), with which I can continue to modernize the fleet even on a low-tension, peacetime budget.

I feel justified in picking this option.

Of course, just after delivering that ultimatum, we lose the Lavoisier (second of her name) to a magazine explosion in a light cruiser action off of St. Nazaire. This calls for a new class. 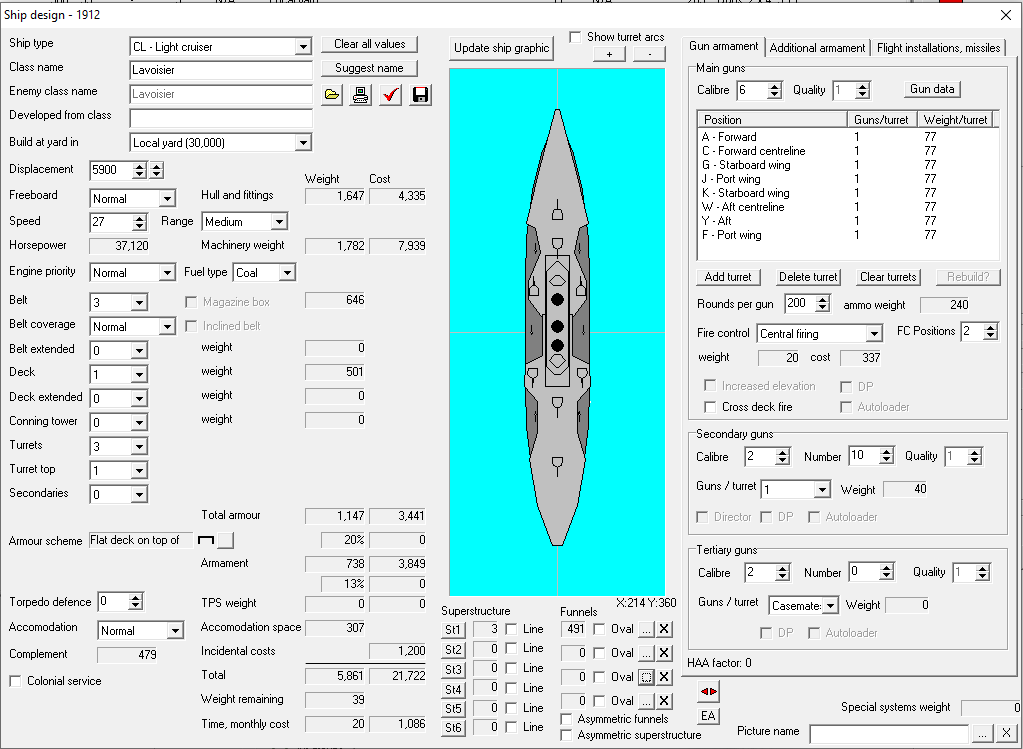 A cruiser action in the Bay of Biscay sees Dunkerque, left behind in Northern Europe to finish repairs while her sisters sailed for Marseilles, send two German light cruisers to the bottom, a fitting revenge for Lavoisier.

A few boring months end with an extraordinary victory. I feel a little bad about not taking screenshots during the battle, but really, it wasn’t very exciting. The British indicated that a German convoy was on its way from Norway to Germany proper, carrying iron ore. The French fleet sortied, joined by a pair of British dreadnoughts, and, crucially, a flotilla of British destroyers. Rather than flee and let the convoy be destroyed utterly without a fight, the three German super-pre-dreadnoughts turned to close the range and bring their large secondary batteries to bear, at which point accurate torpedo work by the British destroyers slowed them to the point where we could overwhelm them with volume of fire.

There were some interesting bits of cruiser action off to the north of the main battle, where French ships darted in toward the convoy while Germans shuffled east and west to fend them off.

The game keeps track of your glorious victories, and proposes names. In terms of strategic decisiveness, I feel like this fits, even if it was a) a little smaller than the historical one, and b) much more tactically decisive.

Intel has some juicy news. The German ships must be very fast indeed, because our battlecruisers are just about even with theirs, and substantially lighter.

After one year of war, the combined might of the Allied navies has utterly swept the Germans from command of the sea. They have no dreadnoughts, battlecruisers, or battleships of any kind afloat. The German heavy cruiser force has been a non-factor in the war so far; much of it is currently in the Mediterranean, cut off from its bases.

French naval superiority is about to get even bigger—in two months, Redoubtable will be in service, followed five months later by Marengo. Four new destroyers will join the fleet around the same time to fill in for losses; two new light cruisers are under construction and due in about a year and a half.

The victory point totals are extremely favorable to us: 40,340 to 14,843. We have, understandably, gained somewhat in prestige as well: up to 29, our peak so far. When the war ends, I’m not much inclined to push for colonies. Germany doesn’t have very many good ones, having started the race when the leaders were already halfway through, and reparations will help us keep building ships when the postwar budget crunch comes.

To replace the two new dreadnoughts coming soon, I have it in mind to start another next-generation Requin-class dreadnought, and to design a cost-controlled battlecruiser—something with 9 12″ guns, 12″ armor, and 27-knot speed is well within reason.

I’m going to cut this update short here—covering two years of war in great detail, especially if it’s this eventful, is tricky.

Your thoughts on strategy, planning, and shipbuilding welcome.