Yes, it’s been about 24 years since Sweden made its choice. And it’s no secret that they ended up going with a variant of the Leopard 2A5 with improved armor (or, more technically, an armor package that was proposed but the Germans didn’t opt for because of budget cuts). But I found a presentation on the trials, complete with previously-classified armor comparisons. The comparisons are twenty four years old, but they’re actual hard data, and I love data. No guesstimates here.

A brief disclaimer before we continue. The three tanks compared here are the Leopard 2 “Improved” (Leopard 2A5), M1A2 Abrams, and the Leclerc. This is an early build of Leclerc. It’s also the “Export” model Abrams, and I’ve never been able to find confirmation on whether or not the one on offer to the Swedes had the depleted uranium armor of the American tanks.1 In any case, there have been armor improvements in subsequent models in all three tanks.

On to the armor charts! These show what percentage of the target area is protected against a hypothetical threat that is rated to penetrate the given value (in mm of RHA) listed on the X-axis. Clearly more is better. 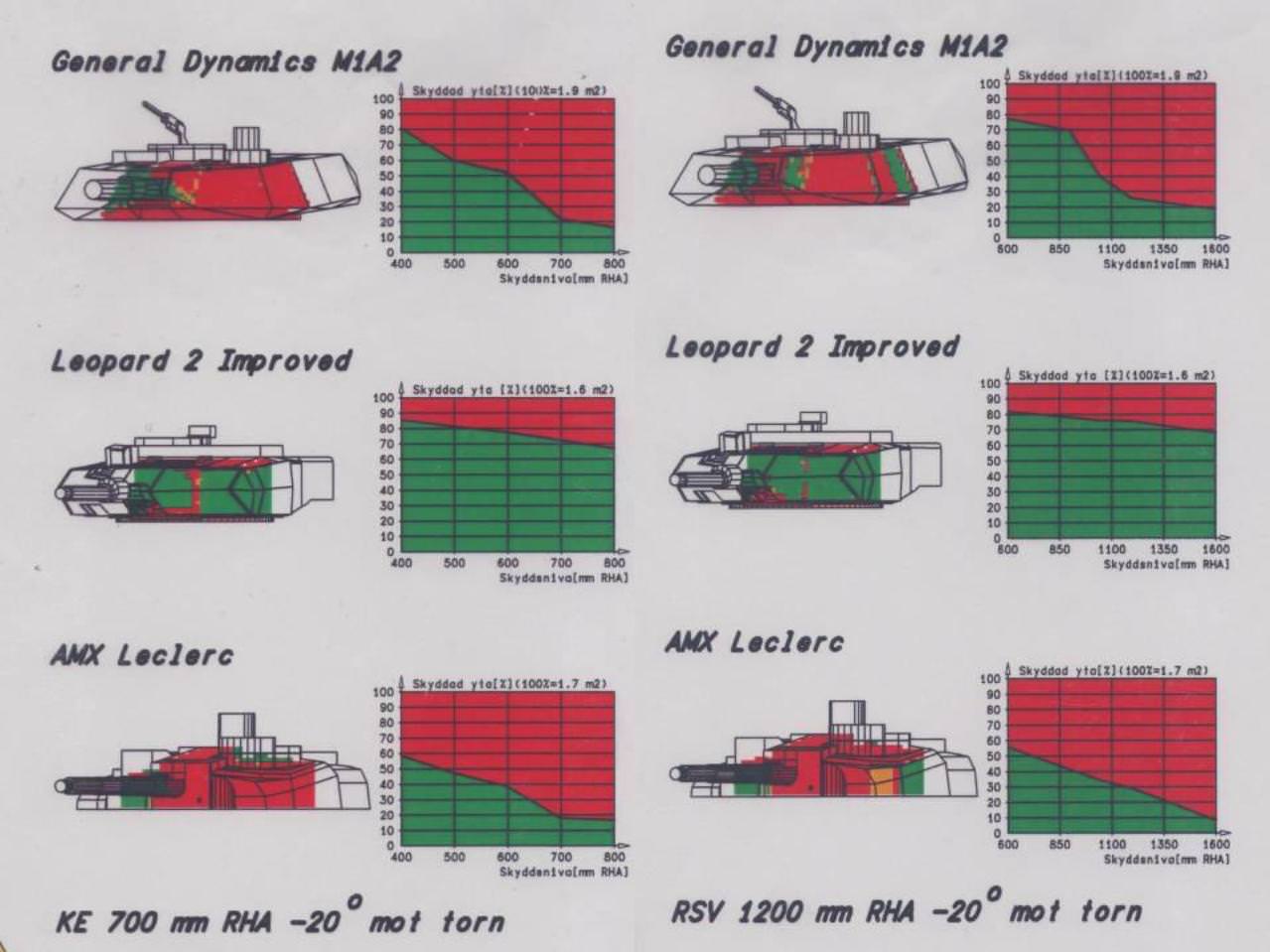 From the table, we can see that of the three tanks on offer, the clear winner is the Leopard 2A5. Leclerc is also noticeably the worst. This breaks down quite nicely. Also interestingly, the Leopard 2 was the only tank that had a roof protection package as an optional extra. It could be added to the other two, but it would have to be designed, prototyped, and tested.

The Swedes also looked at applying some supplemental composite armor to the M1A2, as seen in these charts: 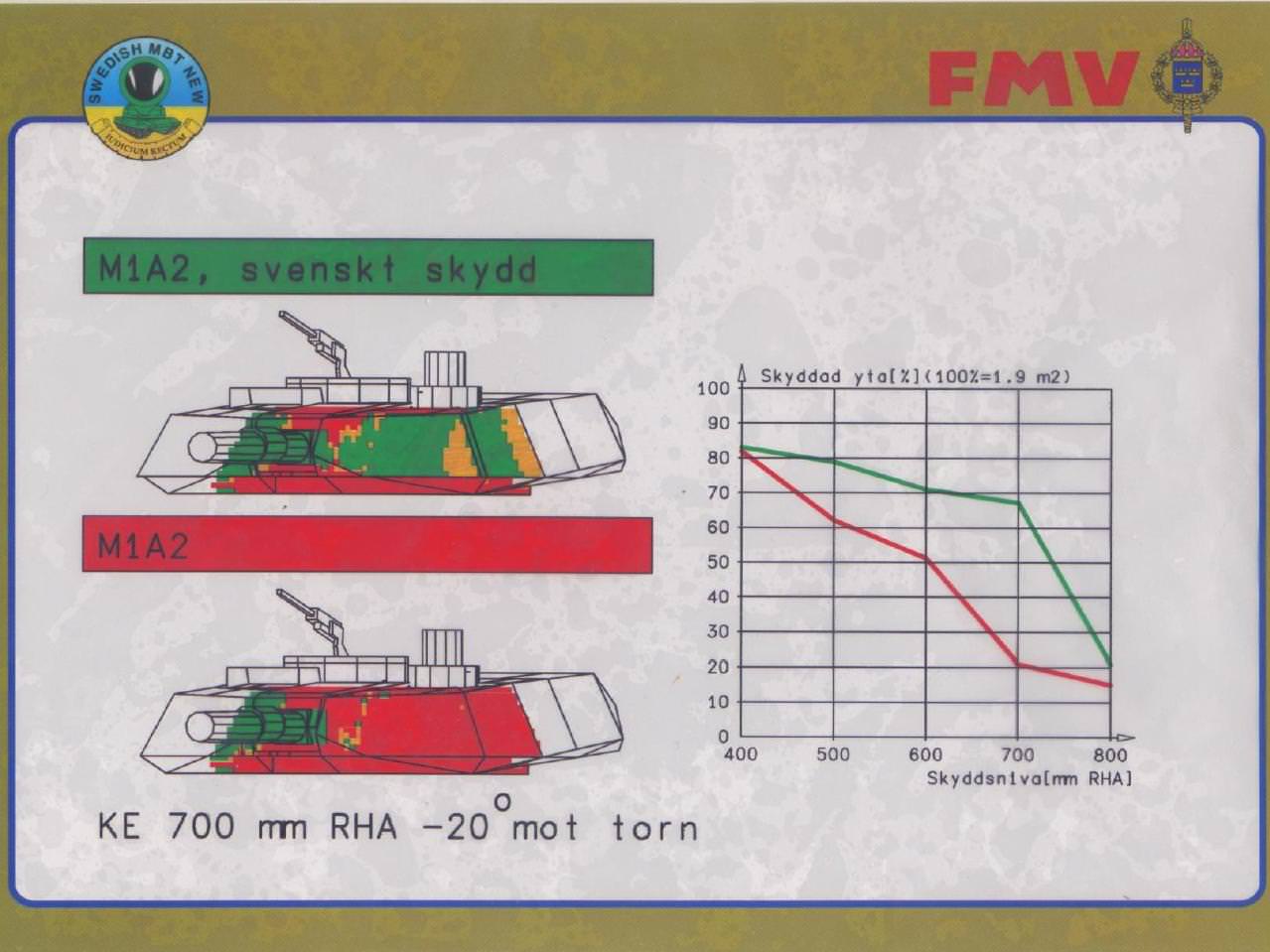 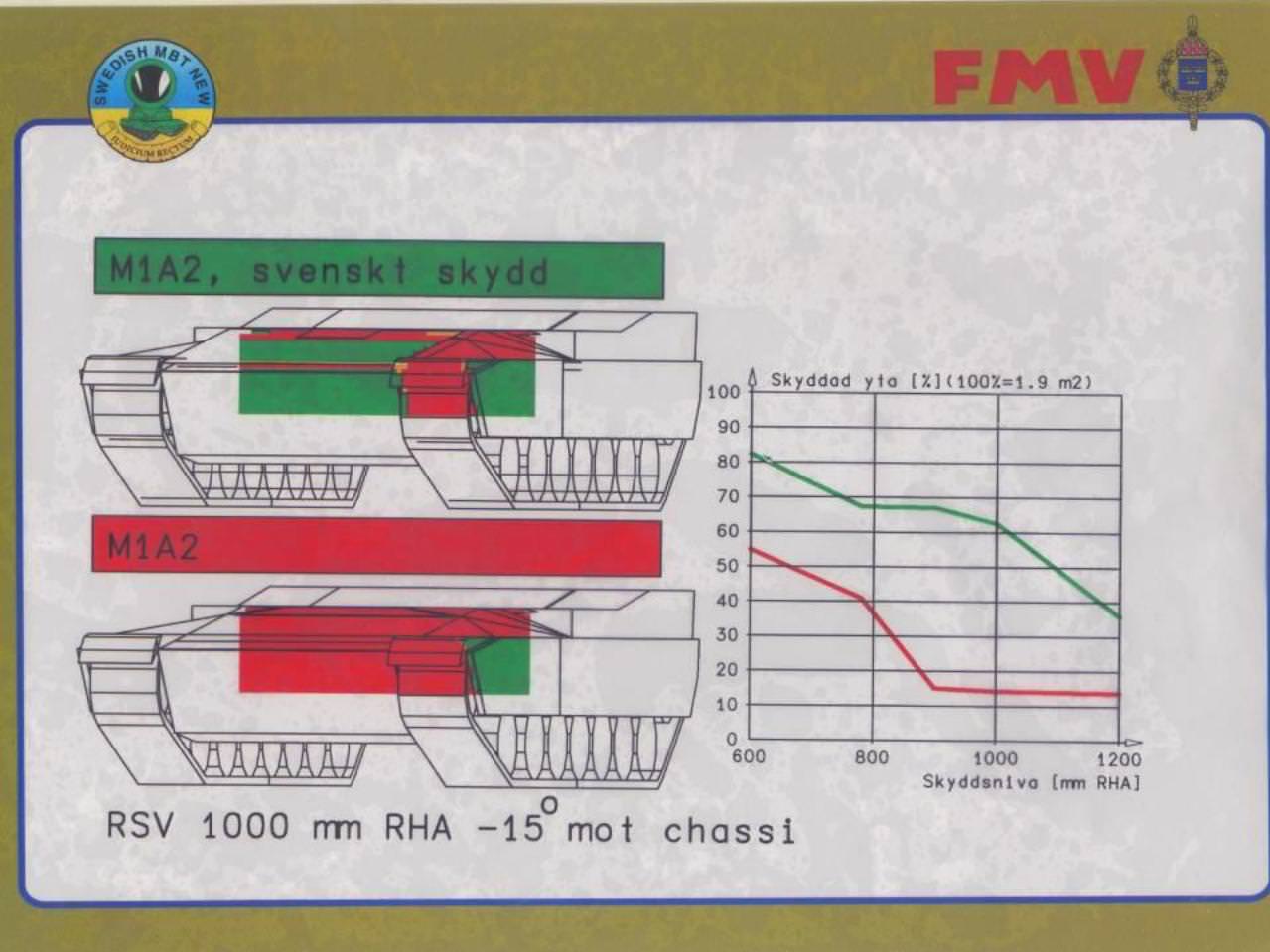 Other comparisons of note, let’s look briefly at the results from the fuel consumption test:

Another helpful comparison. You probably expected Abrams to fair poorly here with the thirsty gas turbine. Leclerc being so similar to Abrams may be a surprise. I am told the French were later able to get consumption down by improving the engine management systems and how those regulated everything. Not sure if that impacted acceleration; the Swedes rated Leclerc as having the best acceleration of the three trial types.

Other trial findings included that the Leopard 2 was most accurate with the training ammunition used and Abrams was most accurate with warshots (i.e. actual munitions). Leopard 2s got the first shot off the fastest. Only the Abrams was equipped with a battle management system. The Swedes also thought the Abrams had the best viewing systems for the tank commander, but didn’t like that it was a thermal viewer only.

The Swedes ended up choosing the Leopard 2A5 as their tank. Based on the above, I agree with their decision. As we’ll see in the next article, there were some Swedish-specific armor improvements that they opted for.

8 thoughts on “Sweden Chooses an MBT: Looking back at the ’94 contest”