Another battle kicks off.

Drake, ever the tactical genius in addition to his other fine qualities as a leader, manages to draw the Draconis Combine forces out of the city in which they had established defensive positions as the tornado passes by. We’re now engaging the enemy in a valley at dawn, with moderate snowfall covering the battlefield. 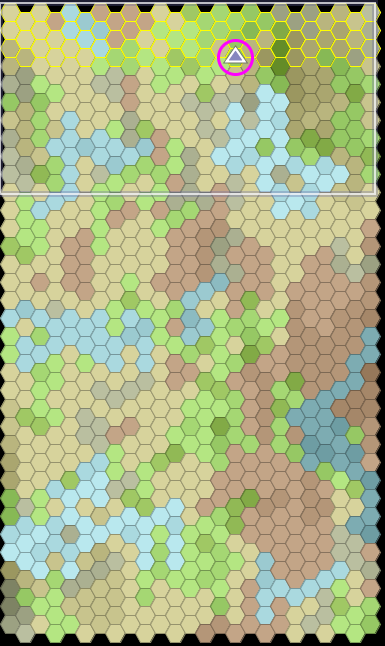 The terrain slopes downhill from west to east, and is dotted by patches of forest. That may be handy for lighter units in the later phases of the battle; woods can screen a small, fast mech from enemy fire with a bit of luck.

We deploy on the north edge of the map, along with our FedCom liaison, today a pilot in a Phoenix Hawk. The enemy deploys in the center.

Woad and the Phoenix Hawk deploy to the northwest corner of the map, where they can navigate the rough terrain with jump jets to perhaps flank the enemy. Drake, Rook, and Carcer start in the middle of the north edge, ready to open fire as soon as the enemy shows itself.

The enemy is two mixed lances, two mechs and six vehicles, with an expected mixed lance of reinforcements arriving later. The two mechs on the field right now are Dragons, a fast, low-profile heavy mech. The enemy seems confident in their skill, moving them forward, along with two of the four Vedettes they brought to the field.

Predictably, the enemy targets Drake. Once again, the AI has proven itself to be much better than me at using cover and sightlines; most of our weaponry is impossible to bring to bear.

None of the Bastards besides Drake hit anything; Drake nails a Vedette with two PPCs to the right side and nearly destroys it. He takes a hit from an AC/2 and an AC/5 in return. 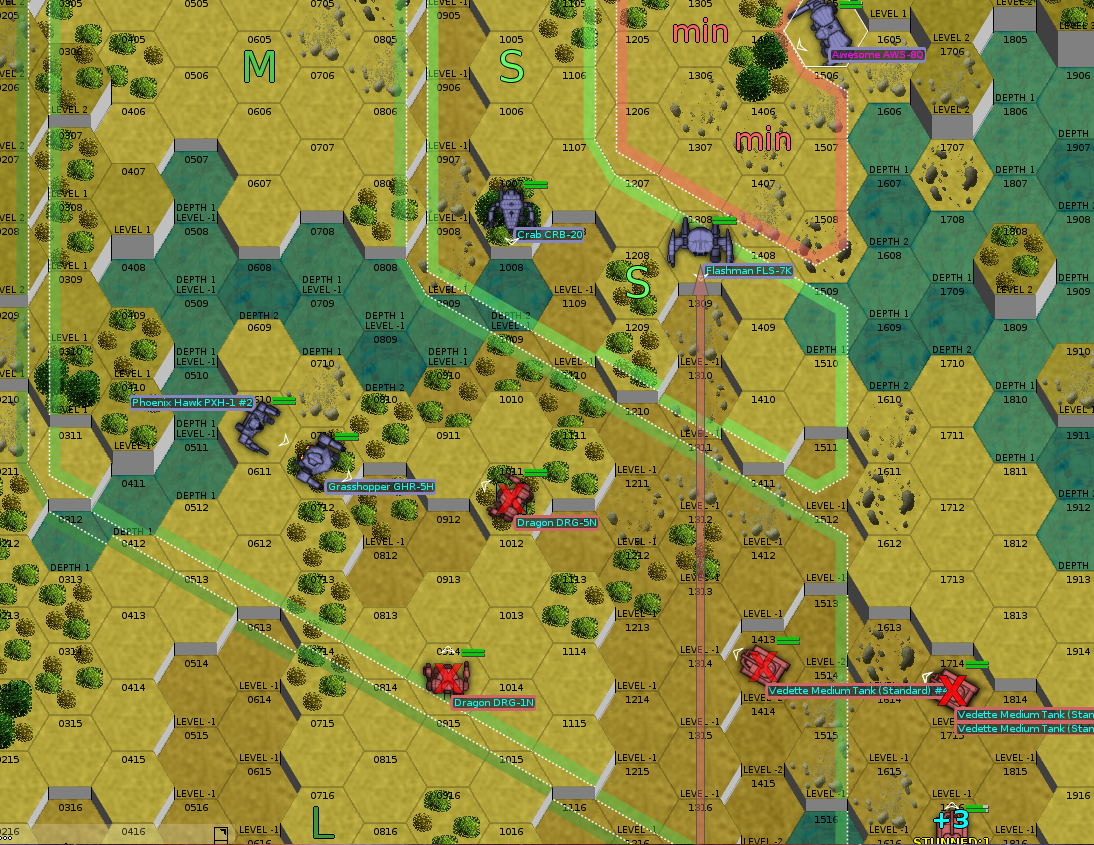 Drake manages to get himself in such a position that he can only shoot at the Vedette he damaged on the previous turn. This isn’t bad, per se, and might even net him a kill. On the other hand, Rook is shooting at it too.

The rest of Heavy Lance has lined up pretty neatly on the enemy Dragons, and will be prosecuting that advantage for all it’s worth.

Rook takes five hits from the AC/2 carrier in the distance, which is hardly anything to worry about, especially since all the shells impact her mech’s arms and legs. Nothing really important in there anyway. She and Drake both hit the Vedette, but don’t manage to eliminate it.

Woad and Carcer take aim at the two Dragons, but can’t combine for more than a low-percentage medium laser hit from Woad’s Grasshopper. 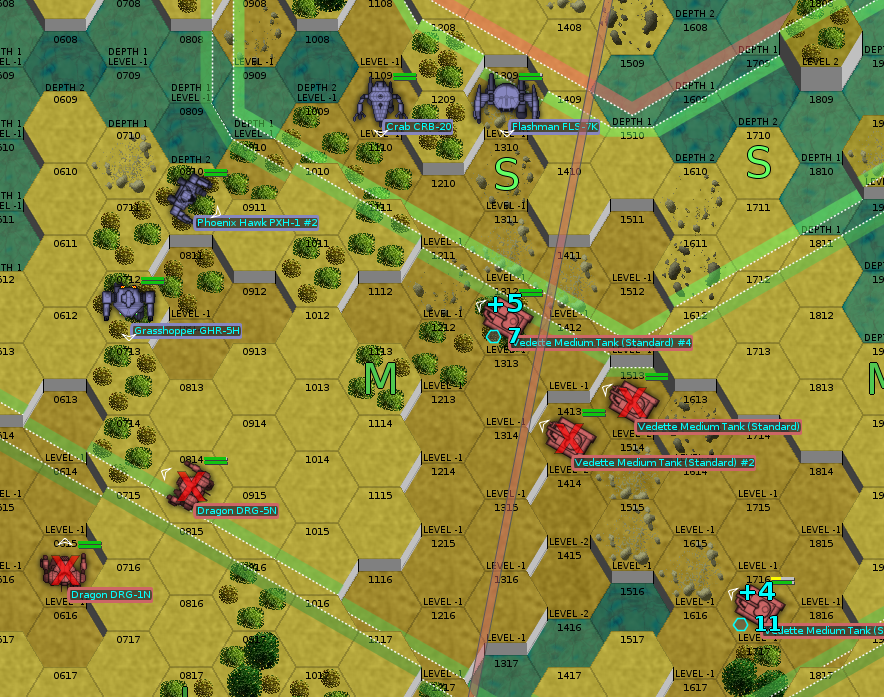 Heavy Lance has a pretty solid line going, occupying the forest here and benefiting from its defensive bonuses.

Drake has nothing to shoot at, again, but the Vedette he’s been whittling away at. Rook has the Vedette right in front of her to take a crack at; she’s joined by Carcer. Woad and the Phoenix Hawk fire on the nearer Dragon.

Drake gets his kill, while Rook does not, though she damages her Vedette’s track.

Woad gets a pair of medium lasers onto the nearer Grasshopper, taking an AC/5 shot in response. 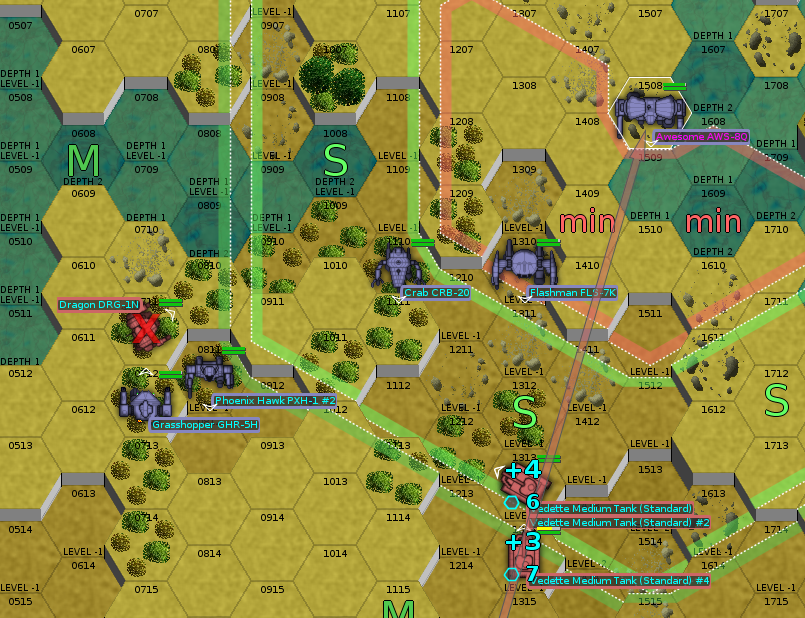 One of the Dragons moves around behind Woad, who is happy to about-face and take a crack at him. The Phoenix Hawk is able to get enough of a twist on to join the fun.

Drake, Rook, and Carcer all take aim for some of the nearby Vedettes, angling to reduce the enemy tonnage on the field.

Drake puts three PPC shots onto one Vedette, while Rook dispatches another. Woad, the Phoenix Hawk, and the Dragons trade fire ineffectually, but Woad plants a solid kick on the Dragon.

Finally, Heavy Lance is decently positioned. Woad and the Phoenix Hawk each have a solid shot on a Dragon, while the Awesome, the Crab, and the Flashman can begin to deal with the tanks further away.

Drake will take a crack at the AC/2 carrier in the distance, while Rook dispatches the Vedette in front of her. Both score.

Woad scores some decent damage on the Dragon in front of him, and also manages to land a kick. So does the Phoenix Hawk.

Drake takes several hits from the enemy Manticore heavy tank, and at the end of the round, his left torso armor is gone.

The AC/2 carrier and the Vedette destroyed, the enemy Manticore heavy tank now looms largest (besides the mechs, of course).

The enemy’s reinforcements, a light lance comprising a Locust, an Ostscout, and two hover tanks, arrives.

Drake and Rook both have clear shots at the enemy Manticore, though both are running a bit hot this turn. Rook fires her large lasers; Drake chances another three-PPC volley. Carcer can manage a good shot, too, and does so. 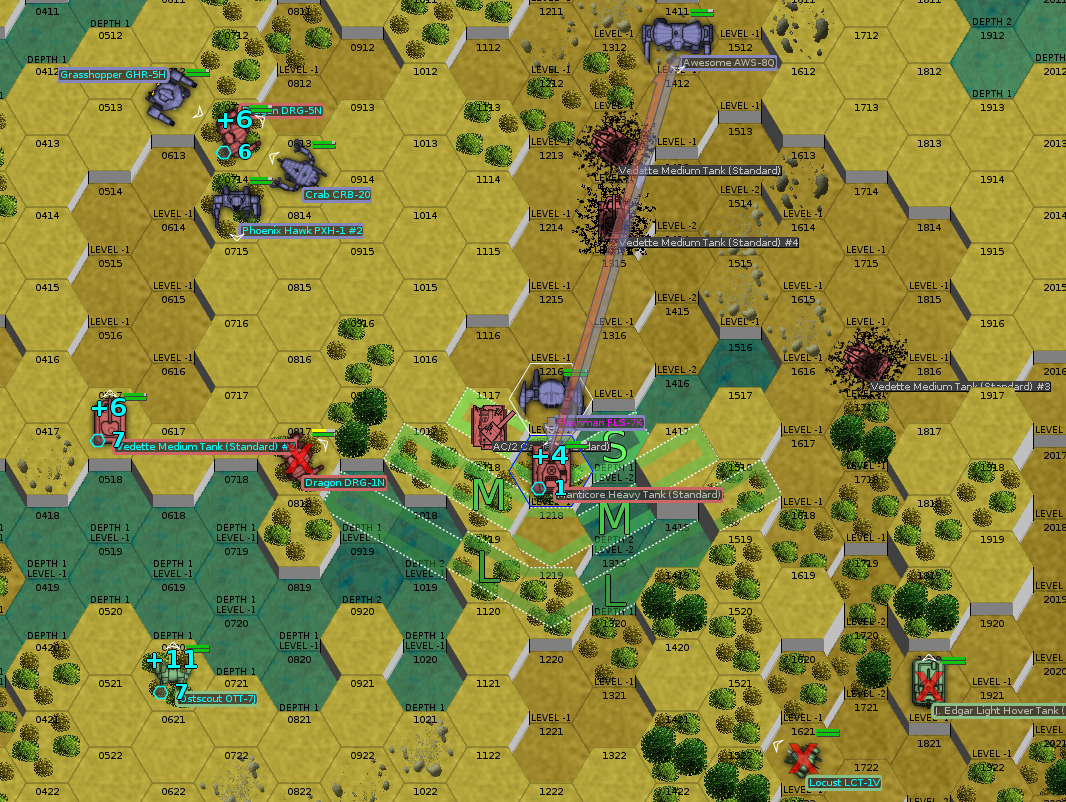 Medium Lance takes the field, and with enemies to spare and not far out of range, at that. Some kills for our second line, perhaps?

A confused movement phase sees Rook facing off against the Manticore at short range, firing every weapon she can bring to bear. Drake leaves two of his PPCs unfired so he can sink some heat.

Woad and Carcer have a Dragon caught between them.

Medium Lance has split in two. Severe and her repaired Locust and Milspec and his Phoenix Hawk proceed down the west edge of the map, while Ker-Ker and Double Dog advance up the middle.

Between her weapons and her Flashman’s foot, Rook destroys the Manticore. Woad and Carcer both shoot at and kick the Dragon between them; Carcer’s kick knocks out its leg.

The downed Dragon attempts to stand and fails. Woad keeps his eye on it to finish it off, while Carcer heads south to help Rook with the three mechs now near her. (A Dragon, and the two lights from the enemy reinforcements.)

Milspec gets his weapons into action for the first time, though he misses; Drake scores three hits on the enemy Dragon, and Rook adds a large laser hit.

Woad fails to finish his Dragon, and will attempt to complete the job with a kick.

Rook, in melee range of several enemy mechs, elects to dodge this round instead of hit back. An uncharacteristic lack of aggression. 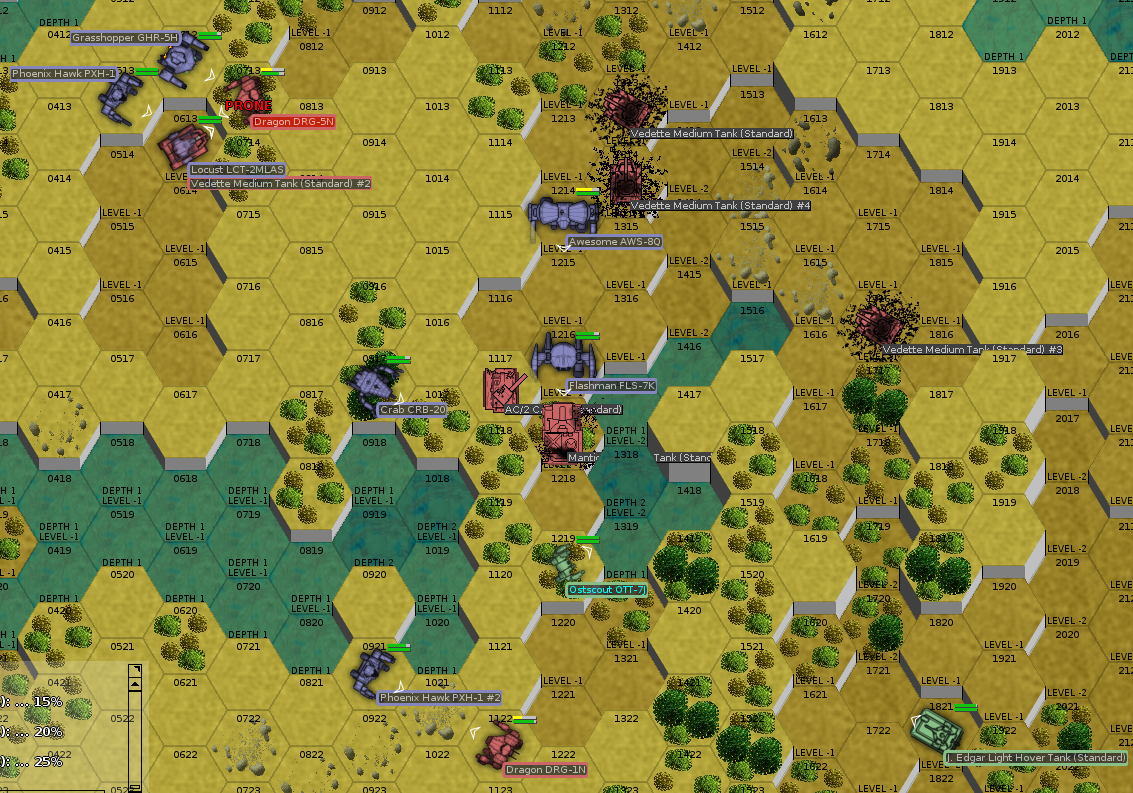 The enemy reinforcements seem to be falling back. Drake and Rook push forward through the center of the map, flanked to the west by elements of both Medium and Heavy lances. Milspec and Severe are in position to eliminate the final Vedette, while Woad continues to wear away at the northern Dragon.

The allied Phoenix Hawk jump jets over a lake and will take a few shots at the southern Dragon.

Not much happens on the prior turn; the big guns were out of action. Woad still hasn’t killed his Dragon, but this is probably the turn. Severe and Milspec work on the Vedette, while the enemy Ostscout approaches.

Drake, Carcer, Rook, and the allied Phoenix Hawk all shoot at the southern Dragon. Double Dog and Ker-Ker are closing in, nearly in effective range. So far, they’ve been moving into position too quickly to stop and shoot.

Milspec scores the unlikeliest kill of the day.

While waiting to kick the Vedette that Milspec just killed, Severe might well have scored us another mech to salvage.

The enemy appears to be in full retreat now. We’ll mop up what we can. (For all our battlefield success, nobody is going to call the Bastards a fast lance.)

Woad gets his kill after all; he just had to aim for a different Dragon. He scores with a kick which blows up the Dragon’s AC/5 ammo supplies. Rook wings a hover tank, but Carcer gets the kill with a hit to its fuel tank. Ker-Ker scores a kill on a Locust; kicking it from one elevation level up, she hits it in the head. The whole weight of the Lancelot behind the blow, the poor Locust has no chance.

The Awesome and Severe’s Locust are mildly damaged, and Severe herself took a knock when the enemy Locust knocked her over. Otherwise, the company is in good health.

We salvage the Dragon DRG-5N Severe headshotted, as well as a Vedette to bring us up to 60% salvage.

Severe may not be all that high up the kill board, but she is currently the giant-slayer of the bunch. All of her kills are mechs, and in that category she’s second only to Rook. Who, incidentally, has now scored 20 kills. Drake gets two, though, to stay at just above half of Rook’s total.

No battles on the calendar right now; the Bastards get a bit of a break.

At the end of April, the FedCom forces gift us a civilian-use Commando (with a primitive cockpit, limited armor, and a large laser). In addition, we picked up a Dragon this month. At present, we have 18 mechs, though not all of them are worth bringing to the battlefield.

Unfortunately, there’s nothing in the unit market to spend it on, besides maybe a pair of Hunchback HBK-4Gs.

Another mech pilot comes up on the recruiting market: Abdul-Hafiz Popalzi, of the Free Rasalhague Republic. He’s a 4+/4+ regular to boot. He joins the company.

Wojtek is the only remaining Green-rank pilot; Hernandez and Euchre are now regulars, too.

Adding the two misfit heavies to Cadre Lance, with Hernandez and the newcomer Popalzi driving, yields a second heavyweight lance. At present, Medium Lance and Bear’s Bruisers (if we’re sticking with that) are both medium-weight lances.

Everything’s in tip-top shape, although the Dragon and Rifleman designs are still questionable.

Our technical teams are a little under-strength compared to our mech strength now. We’ll have to see to that.

We had to use a few more actuators and a spare torso or two to patch up the Dragon.