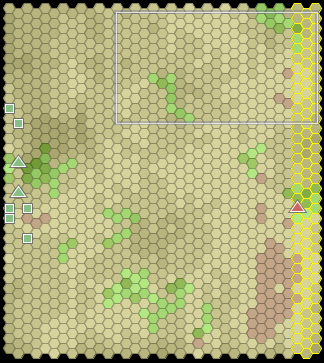 Today’s terrain is wooded hills, a nice large map with room to maneuver.

Heavy Lance will deploy in the northeast corner, since the Flashman and Awesome aren’t due until Rounds 2 and 3.

Private Ngo and Double Dog deploy in that northeast corner, behind some trees from the main body of the enemy. They begin to maneuver toward the enemy, still well out of range. 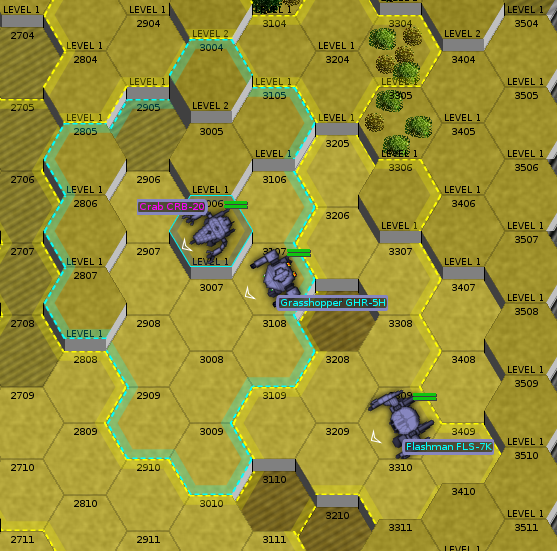 Rook’s Flashman takes the field. The enemies are still out of range to the southwest. 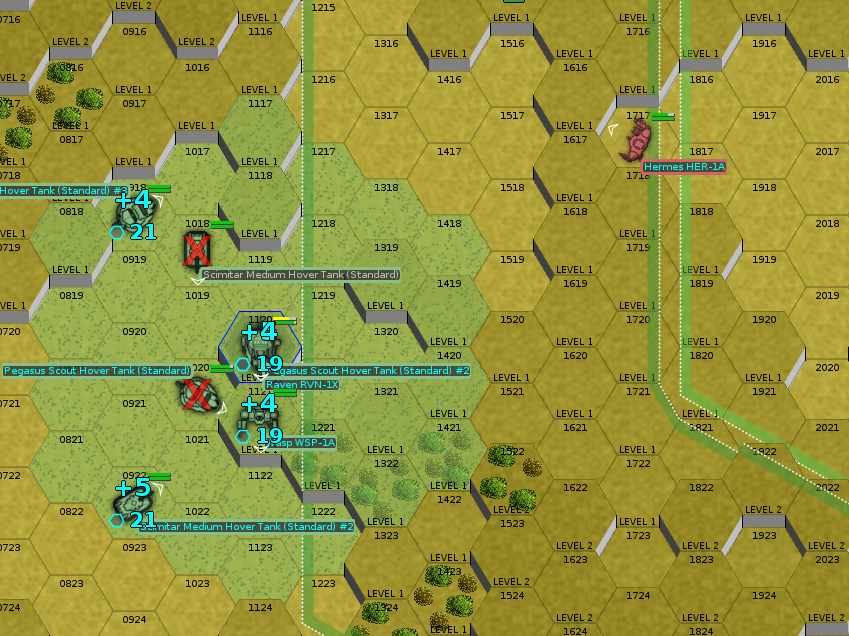 Drake arrives in the Awesome. He’s just barely out of range with his PPCs. The enemy, having initiative, manages to stay out of Ngo’s firing arc, too. Rook and Double Dog have shots, though; Double Dog cracks off a Large Laser shot at an enemy Pegasus, while Rook opens fire on an enemy light mech, a Raven.

Everyone misses everything, except for our brave ally in the Hermes; he cracks the Raven’s center torso.

Drake can hit from here; he aims for a Pegasus hover tank. The remainder of Heavy Lance, taking cover behind a convenient hill, has a shot on the same tank. In the hopes of removing it from the field, we focus our fire on it. 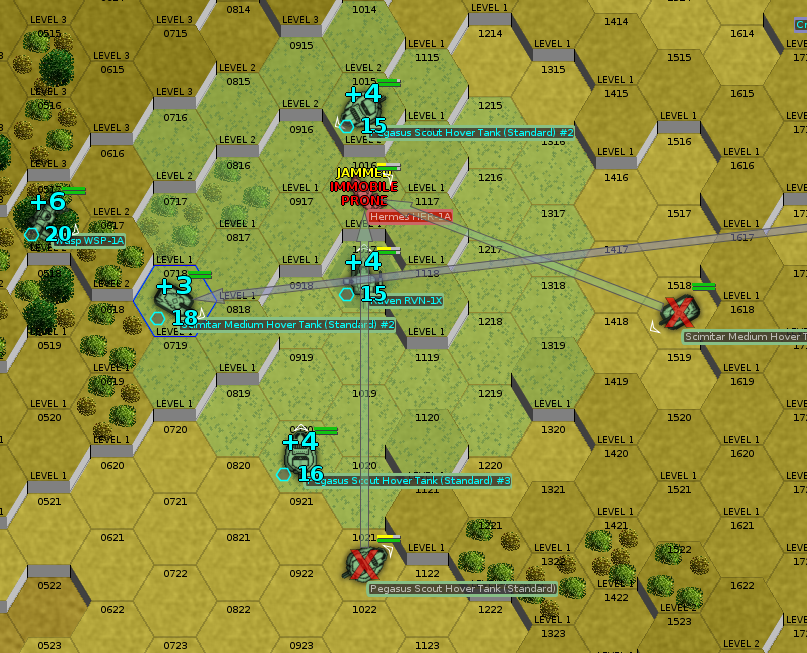 The friendly Hermes is suddenly in a bit of a jam. It seems likely it’s going to die now.

Drake immobilizes the Scimitar, which should make it easy prey going forward. 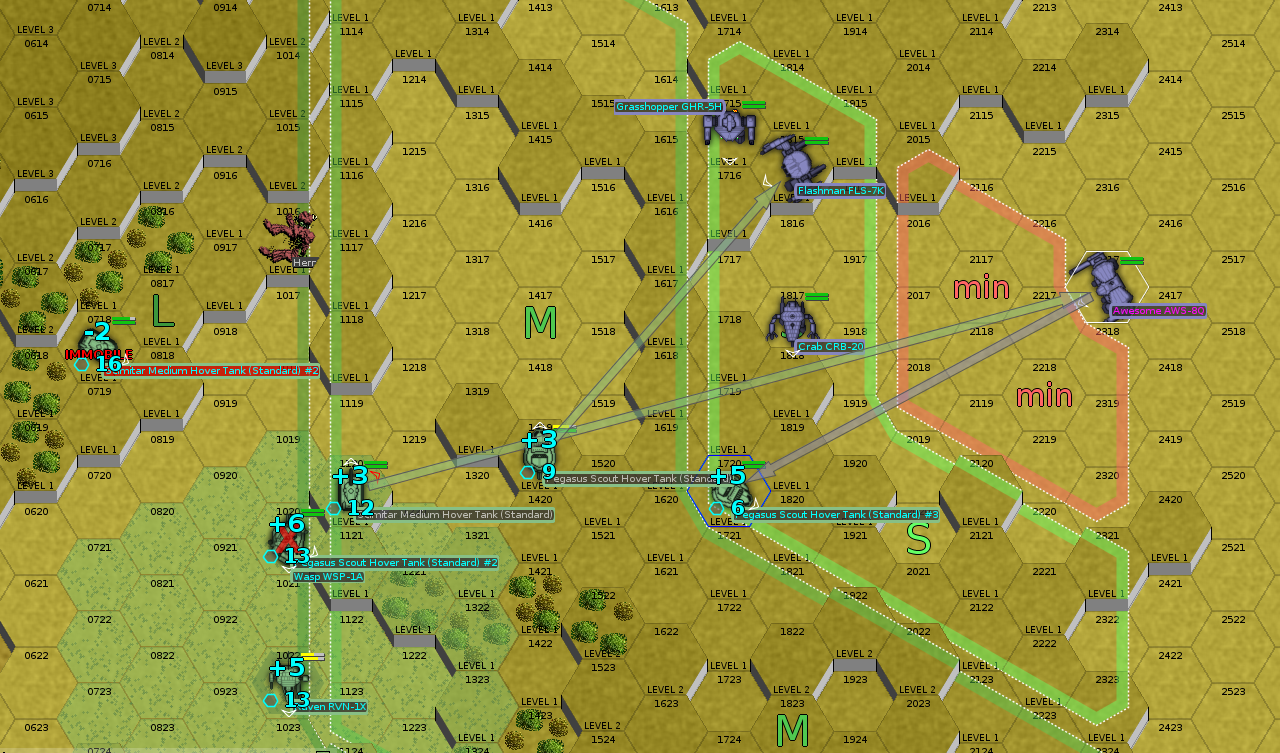 The friendly Hermes is now dead.

Cadre Lance will arrive before the next round.

This round, we’ll be working on the nearby Pegasus scout tanks; they carry SRM-6s, or what past experience leads me to call ‘mech-bane’. Drake and Ngo will shoot for the nearer one, while Rook and Double Dog go for the further one.

Ngo pads her tally with a kill on the nearest Pegasus, while Rook adds to her lead with the kill on the other.

Cadre Lance arrives, and with its high speed is already close to the fight. 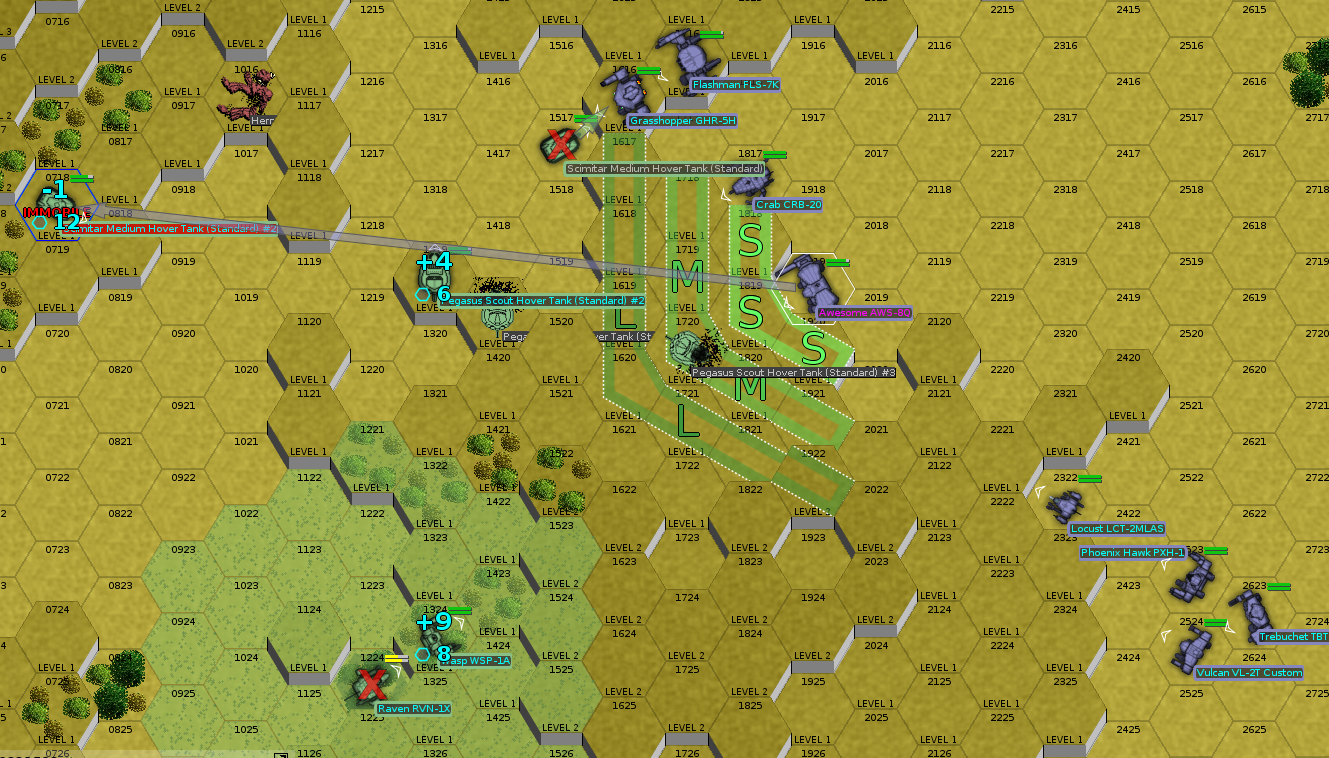 Drake aims for the Scimitar he immobilized; at this range against a stationary target, he’s automatic, a leisurely kill.

Ngo and Rook look to kill the last Pegasus, while Double Dog aims for the Scimitar hover tank directly in front of him.

Cadre Lance fires at what they can, but they’re still largely out of range.

As expected, Drake scores with all three PPCs on the immobilized Scimitar, punching through its armor with the first, cutting deep into its internal structure with the second, and scoring the kill with the third.

Ngo immobilizes the Pegasus, but Rook, everyone’s favorite glory hog, gets the kill. 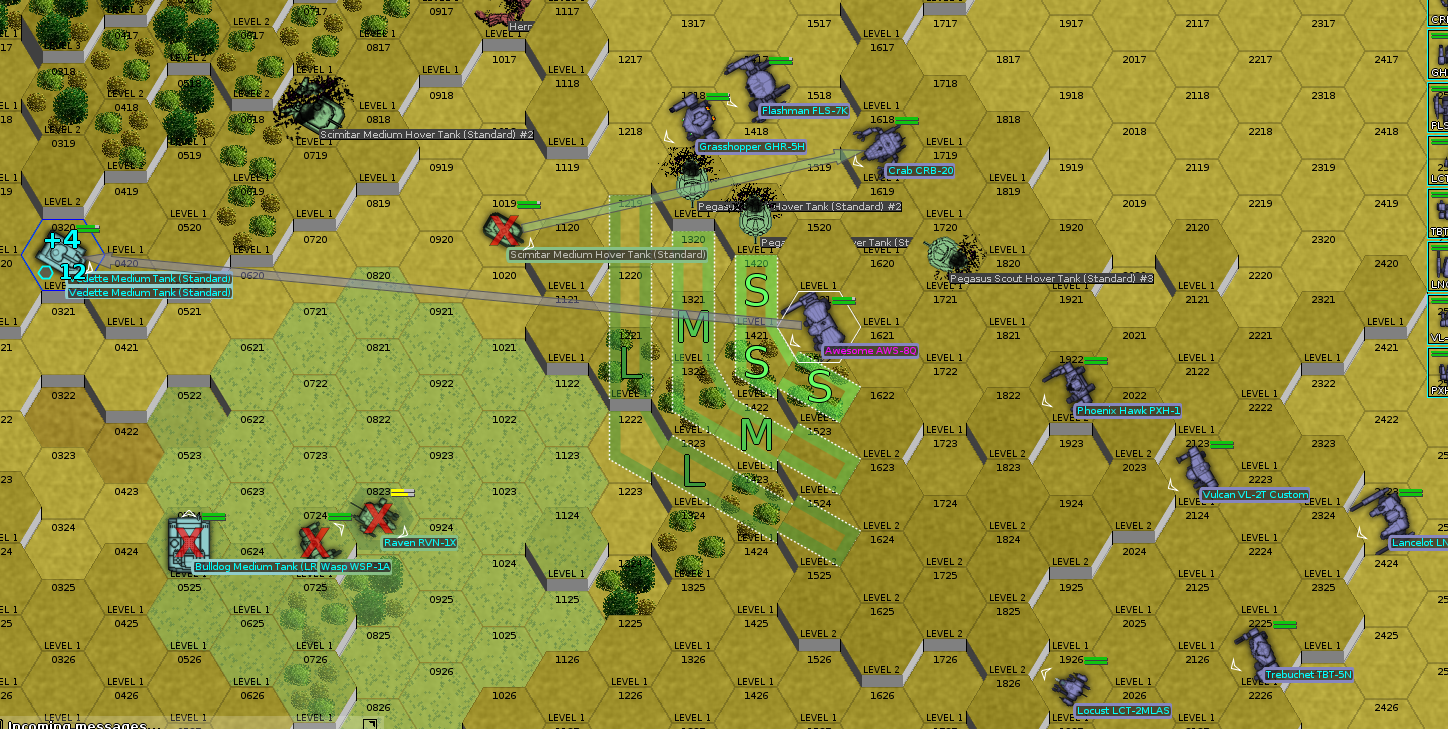 The enemy reinforcements arrive. At this stage, we’ve already won per the battle requirements, but once again, we’re in a sufficiently good position that I decide to fight it out. Drake, hidden from enemy fire by woodland, shoots at the only enemies he has a line on, a pair of Vedette medium tanks. Rook and Double Dog team up on the Scimitar in front of them.

Cadre Lance is still mostly out of range.

Finally, Cadre Lance is mostly close enough to shoot. They, along with Heavy Lance, mainly engage the Raven. Drake and Ngo take aim at a Vedette and the currently-immobilized Scimitar, respectively.

Ngo and Teddy Bear are the only two to hit anything; Ngo finishes off the Scimitar, while Teddy Bear inflicts light damage on the Raven.

The battle is truly joined now; not much movement occurs. 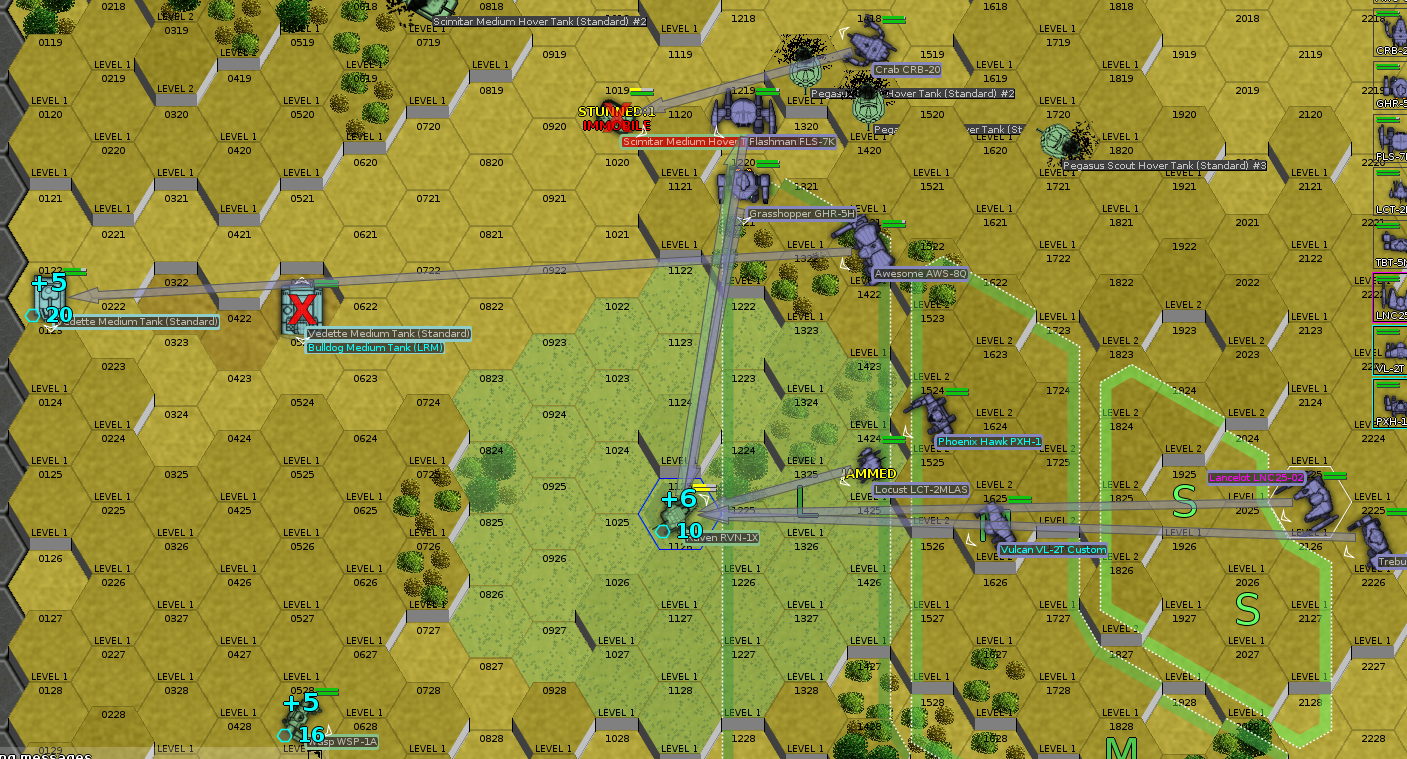 Drake polishes off the Raven, Rook scores on a Vedette. Wojtek lands a 15-missile volley on a Bulldog medium tank, nearly destroying it; Milspec, however, lands the killshot, delivering the largest amount of damage I’ve seen yet.

At this point, the enemy is scattered and nearly destroyed. Double Dog finishes off a heavily-damaged Scimitar which limped away from the battle early. Rook (of course) gets the Hetzer. Lastly, Severe scores a critical hit on the enemy Wasp’s SRM ammo, knocking it out. 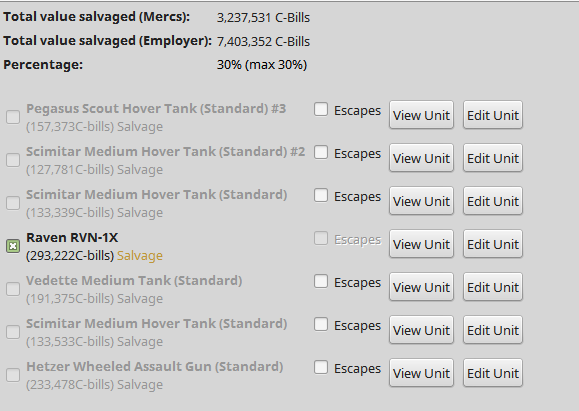 Drake is moderately wounded, and his Awesome will need a good bit of armor. No mechs took internal damage, and no other pilots got hurt. An easy victory.

Only the Raven is available for salvage, mech-wise; we take that, because it has medium lasers and armor.

We ransom five prisoners for 60,000 C-bills, and make a few thousand more in battle loss compensation.

Rook continues to trounce all comers.

After this month’s victories, the Capellan forces break and the contract is complete. Despite the general wimpiness of the Capellan armed forces, this was nevertheless a good test for the Opinionated Bastards. We fought at a very high tempo, and still managed to keep our unit in good fighting trim.

We purchased a Thunderbolt.

Woad gets his Grasshopper back, now that we have a replacement Thunderbolt for Double Dog. Lance tweaks to come.

Now that the contract is over, we arrange for the following spares from the Federated Commonwealth. (Their price is deducted from the finances note above.)