The M1 Tank Test Bed (TTB) was a late-80s prototype to test unmanned turret design concepts and compare them to a modern, manned-turret design: the then-state-of-the-art M1A1. The TTB was not necessarily intended to be what the next MBT would look like, but it was intended to shake out some design concepts and see if they were worth considering in the future. So let’s take a look.

Some of you may notice a resemblance to the T-14. Both use similar unmanned turret design concepts. Such designs have been kicked around since the 1950s by many different groups of tank designers, and all for similar reasons of being able to reduce protected volume (and hence reduce design weight for a given standard of protection). The M1A1 weighs about 57 tonnes. The TTB, with a similar protective standard and the same 120mm gun (and a similar ammunition capacity) was reckoned to weigh about 15% less, for an approximate TTB weight of 48.45 tonnes. Interestingly, this is very close to the published weight for the T-14.

TTB also, of course, reduced crew to three men and put in an autoloader for ammunition handling. The design was intended to improve crew safety by completely isolating the crew from the ammunition. The autoloader itself was a large carousel, holding all ammunition below the turret ring. Let’s look at some pictures. 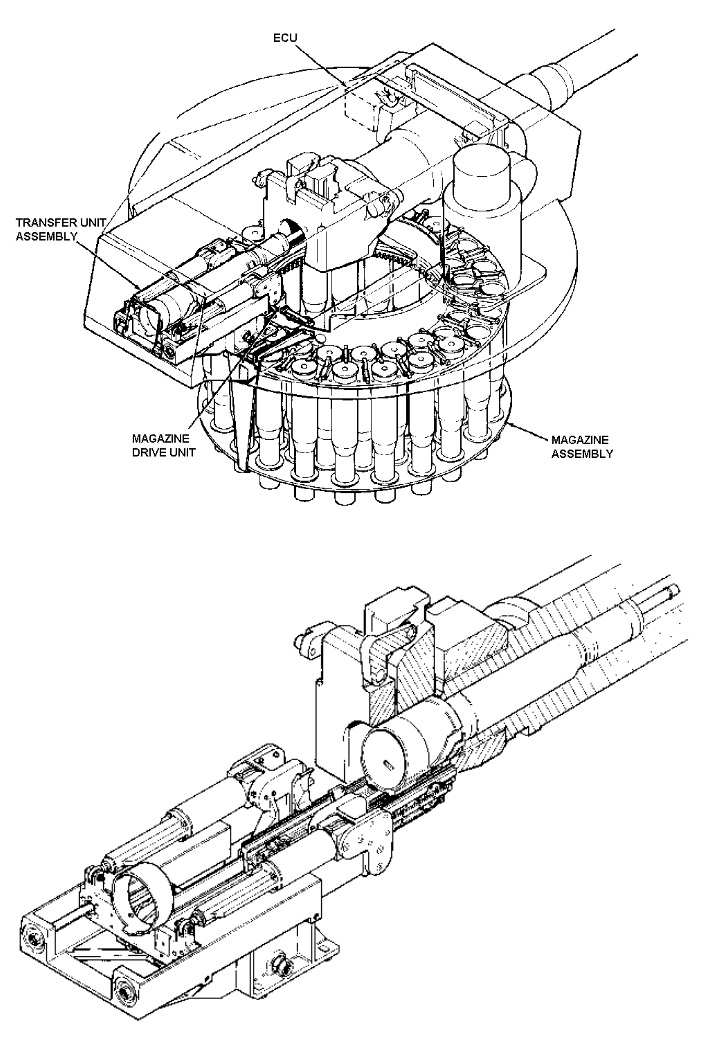 It’s sort of like the autoloader on the T-80, though NATO 120mm ammunition is one-piece, and is therefore a little more annoying to design an autoloader for. The autoloader built for the TTB held 44 rounds and this could be expanded to 48 or even 60 rounds with minor design changes. All of the ammo was stored in a ready configuration because the crew would be unable to move ammunition from a reserve magazine to the autoloader’s ready magazine (as on the Leclerc for example). The TTB autoloader was extensively tested, and could manage a rate of fire of one round every 12 seconds. Spent case bases or misfired rounds were ejected out a small hatch the back. The autoloader could be supplied through the rear hatch, and also had an unloading mode where it could slowly present rounds for removal. The autoloader weighed about 1,400 lbs. empty.

Some might question the vulnerability of such a design. However, statistically the vast majority of tank hits occur to the turret. Tanks like the T-72, for example, ran into trouble because of the ignition of their unprotected reserve ammunition stowage in the turret, not hits that set off ammunition in their autoloaders. And again, complete isolation from the ammunition should keep the crew relatively safe.

The TTB program was dialed back with the end of the cold war and was finally cancelled in the mid 90s. The autoloader design was used in the M1128 Mobile Gun System version of the Stryker.

As for the TTB prototype, it’s at the National Armor and Cavalry Museum at Fort Benning, and has recently been restored and repainted.