On the plus side, it’s a very hilly map with a lot of forest, which means, given initiative (which I never have, and which always seems weighted against the force with fewer units in any case), we can use the trees to protect ourselves.

Medium Lance will deploy near the edge and stay close to it, so that they can retreat in case of emergency.

Since, once again, it’s a Scout deployment, units deploy by speed; onlyEuchre andHanzoku (in the Trebuchet and the jump-capable Guillotine) arrive in the first round. 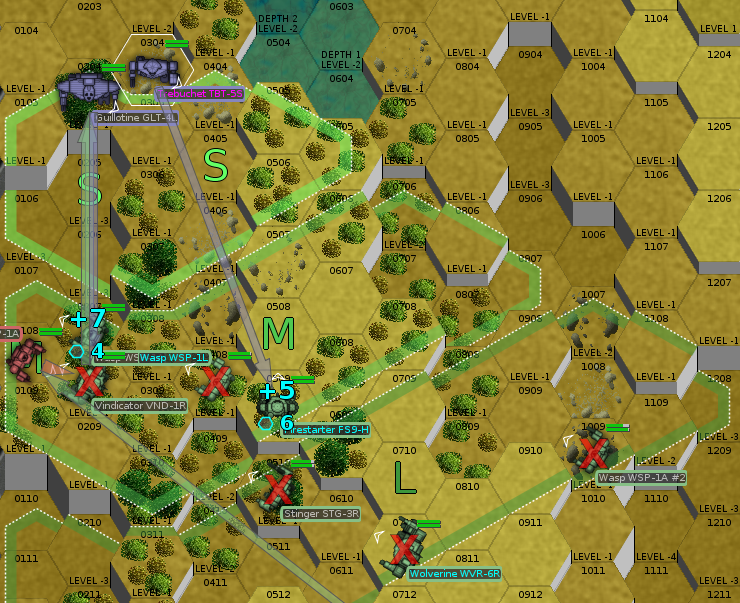 Pictured: basically every mech currently deployed. Happily, almost everyone misses. As usual, the allied Wasp is getting plastered. 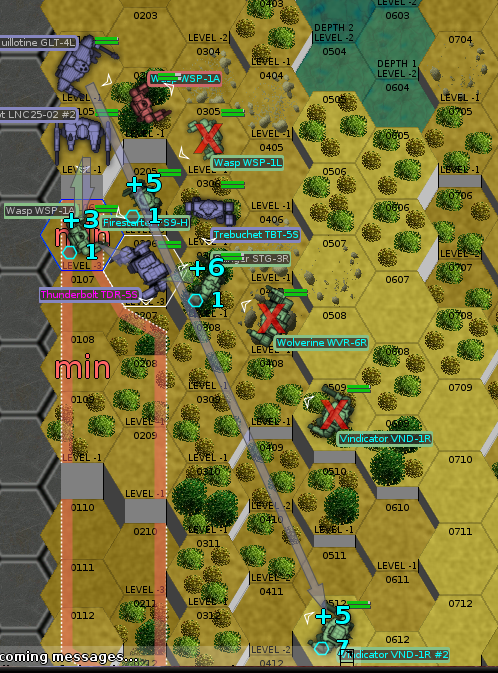 Ker-Ker and Double Dog arrive. This is literally the worst kind of fight.

As seems to be tradition, Ker-Ker takes a pounding from the enemy, and fails to keep her mech on its feet.

The melee phase makes things even worse. Three of our four mechs end up on the ground.

Everyone manages to get up. Euchre moves to protect the flank, while the heavier mechs take aim at a Vindicator and a Wolverine.

Ker-Ker, still focused by the enemy, loses a leg to weapons fire from a Wasp behind her. Her mech falls and won’t be getting up, but at least she’s not wounded or unconscious. The Lancelot still has both its arms, so she can prop herself up and shoot, too. Euchre plants a solid kick on the Wasp that did it and destroys its leg in return.

Ker-Ker takes light damage, which isn’t bad, all things considered. Since, for once, she’s merely prone rather than prone and immobilized, she’s actually a harder target for mechs more than one hex away than she would be were she standing.

Euchre bags the Wasp which knocked Ker-Ker‘s mech down, while Double Dog kicks the Stinger next to him in the torso, knocking it out.

The Wolverine jumps next to Ker-Ker, no doubt intending to attempt to kick her downed mech. The rest of Heavy Lance angles to keep that from happening. 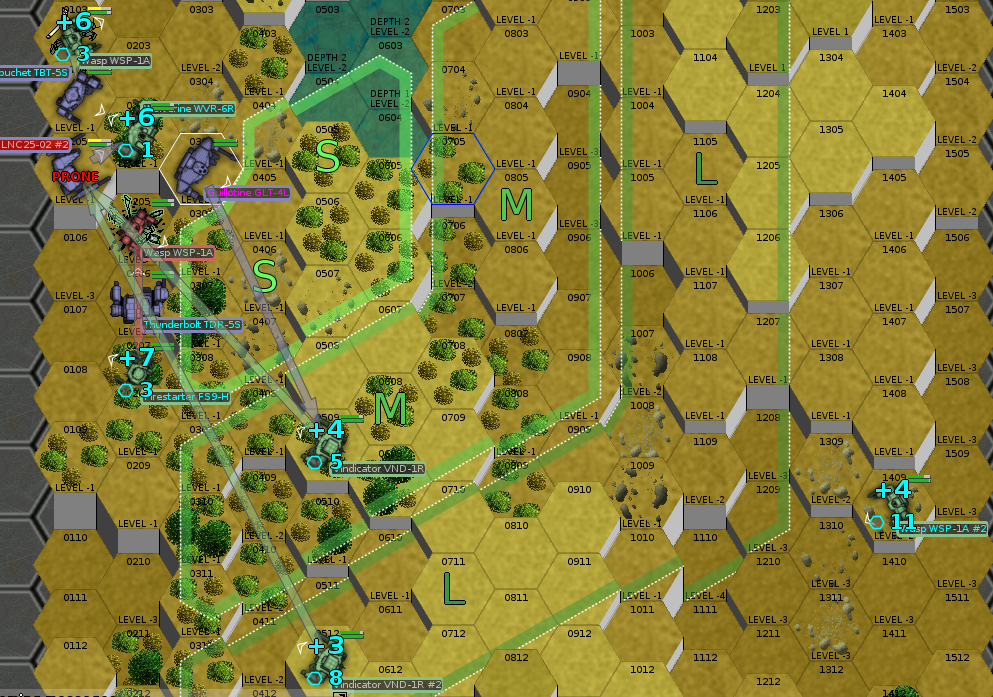 The Lancelot takes heavier damage this time, including a hit or two to the head. The damage knocks Ker-Ker out, so now she’s in serious danger. Again.

The brunt of the enemy fire is aimed at Euchre, but catastrophe! It’s the Thunderbolt taking a lucky critical hit through the armor. (Fun fact: through-armor crits should happen a little less than 3% of the time. It’s happened twice in three turns here, though I didn’t mention the first one, since it was less terrible in outcome.)

The allied Wasp proves its worth for once, destroying its opposite number.

This time, we focus on one of the enemy Vindicators. Next round, Cadre Lance arrives; the round after, Heavy Lance takes the field to wrap this one up. 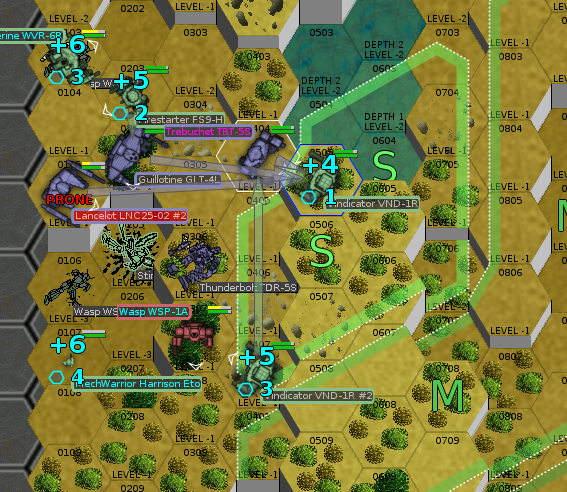 The FedCom Wasp falls again, after taking heavy damage from the Vindicator facing it. We knock out the nearer Vindicator’s PPC, which renders it more or less harmless. It’s also taken heavy center torso damage, and another round of focus fire should fell it.

Cadre Lance arrives. The better elements thereof take the field to the north of the battle, while Wojtek and Severe deploy to the south. They’ll work as a team, with Severe spotting for Wojtek‘s LRMs. 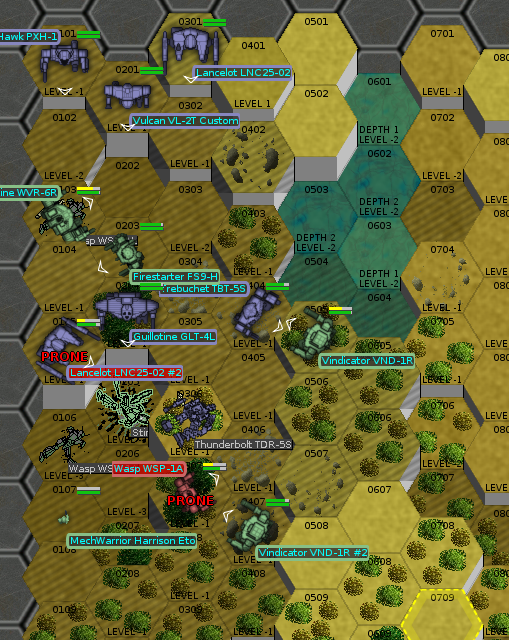 Teddy Bear scores his first mech kill, knocking out the Wolverine menacing Ker-Ker with a hit to the ammo reserves. Which is a shame, because other attacks decapitate it; we could have taken the chassis if it hadn’t blown up.

Ker-Ker‘s Frankenstein Lancelot is going to take quite a lot of repairing agin.

As Heavy Lance takes the field, the enemy quite wisely begins to retreat. We’ll see what we can do to take them down. 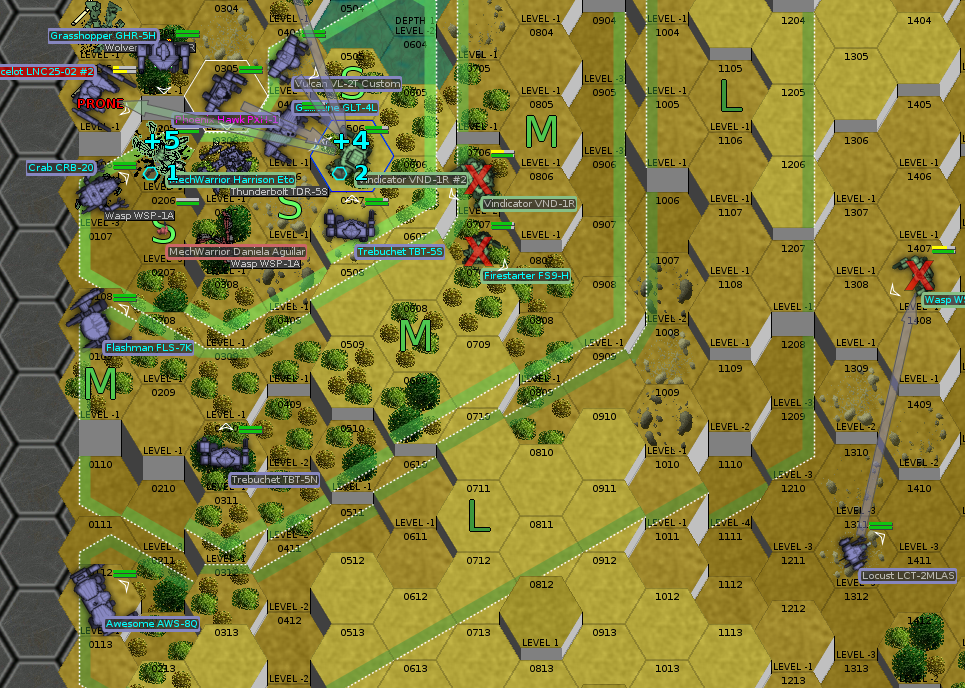 It’s Hanzoku in the Guillotine who gets the kill on the Vindicator nearest us, his first as an Opinionated Bastard. Rook, hitting a ridiculous cross-map shot on a damaged Wasp, further cements her place atop the killboard.

With only two enemy mechs left, we move to cleanup. Rook bags the Wolverine, while Severe notches her first kill on the enemy Firestarter.

The Thunderbolt is a total loss, so thoroughly destroyed by the ammunition explosion that there’s nothing left to salvage. The Frankenstein Lancelot is crippled, but we have enough spare parts to get it back into service. Everything else is undamaged. Ker-Ker is the only pilot to be wounded; she has a concussion again, along with a number of lesser injuries.

We can’t take any actual salvage because we’re still over our percentage.

We receive battle loss compensation to the tune of 600,000 C-bills, then add 70,000 more in ransom payments for enemy prisoners.

Rook‘s lead grows. Notably, all the current Opinionated Bastards now have at least one kill.

(Turns out I forgot to take a picture. Oops.)

The Capellan forces are beginning to look worn down as our string of victories takes its toll on them. There’s another mission scheduled for tomorrow, a probe against a medium vehicle lance and a mixed mech-and-vehicle light lance, with a second medium vehicle lance in reserve. Heavy Lance and Cadre Lance are currently detailed to the mission, with Cadre Lance arriving late as reinforcements.

We currently have 5.856 million C-bills in the bank.

There are a few options to replace the lost Thunderbolt, including another Thunderbolt. Action item below for should-we-buy-something.

Double Dog, left without a mech, takes Woad‘s slot in the Grasshopper for the upcoming mission. (Sorry, Woad. It’s not that you’re a bad pilot, it’s that the other guy’s a better one.)

We’re in good shape. Ker-Ker‘s Frankenstein Lancelot is missing a large laser, and the Grasshopper is still down a jump jet.

We’re out of large lasers, which is a significant blow, especially given Ker-Ker‘s tendency to get our Lancelots blown up. We are, of course, still out of three-ton gyroscopes, but in good shape otherwise.