The Capellan forces arrayed against us are lightweight, as is typical for Capellans. (If I’d known they were such pushovers, I would have recommended tackling them a lot more strongly!) 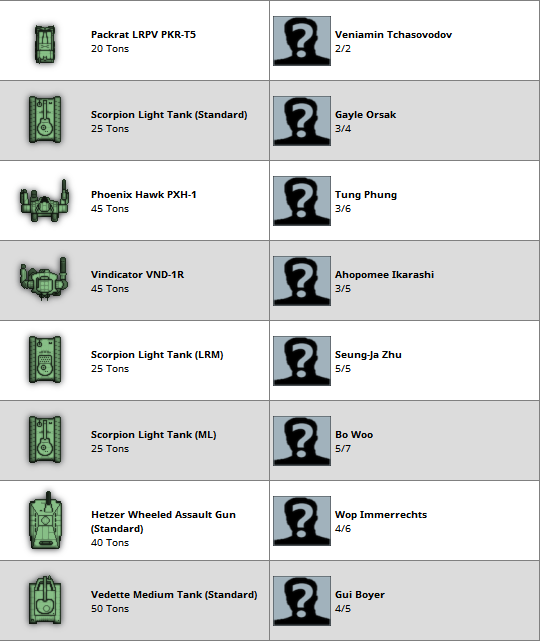 The only things on the list to be concerned about are the Hetzer (with its AC/20) and the Vindicator, which mounts a PPC.

The battle commences in heavy fog. That has two effects: movement will be much slower, and accurate shooting will be somewhat harder. The terrain is heavy urban; there are no open areas on the map, and most combat is going to take place along streets.

Since Heavy Lance is deployed with the Scout duty, they arrive on the battlefield fastest mechs first. Only Private Ngo’s Crab is fast enough to make it on the first round. Rook and Double Dog will arrive in the second round. Drake and the Awesome will turn up in the third. We deploy on the north edge of the map; the enemy deploys in the center. 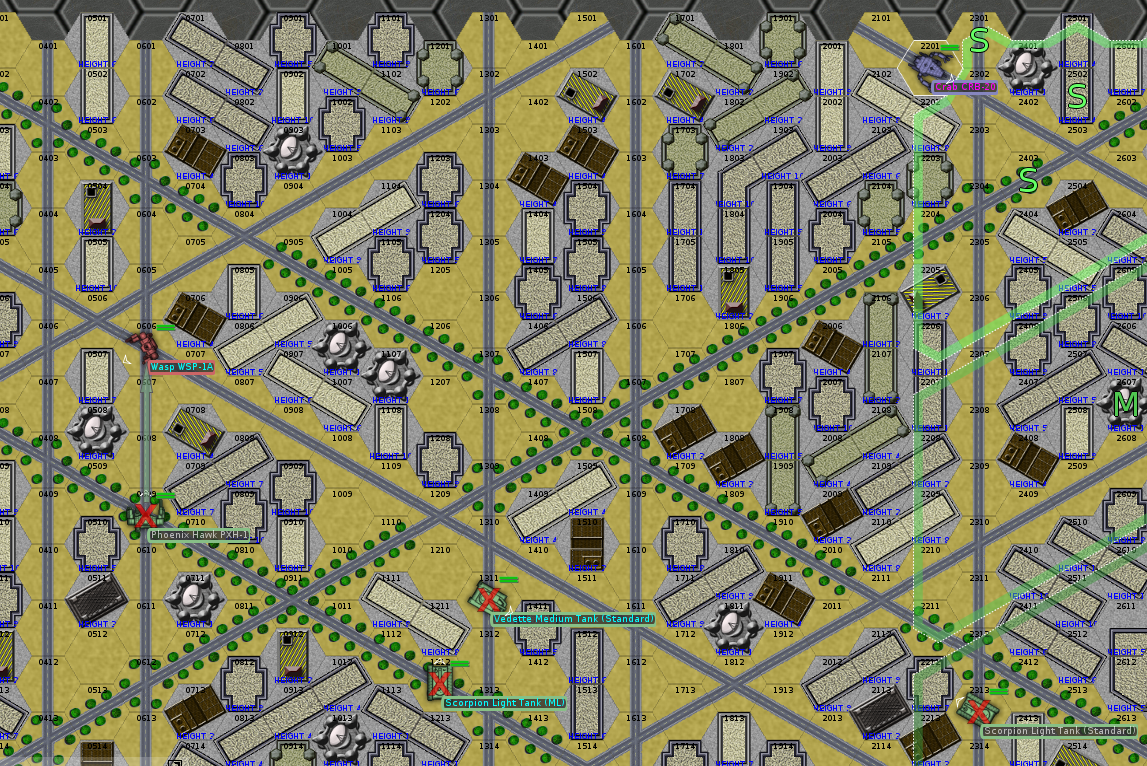 Ngo starts off on a side street, out of view of the enemy; the liaison, in a Wasp, tangles with the /Capellan Phoenix Hawk and takes heavy damage. 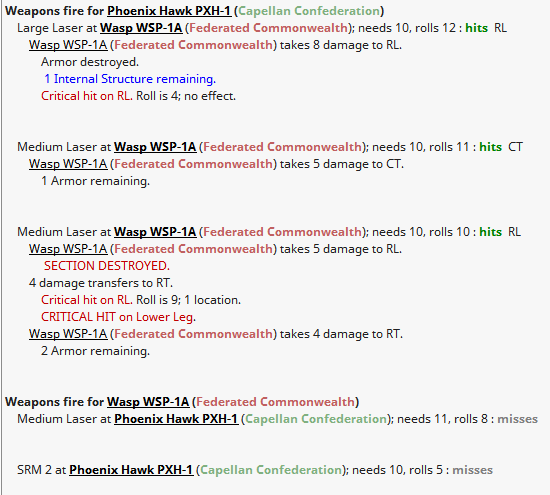 The Flashman and Thunderbolt show up, deployed somewhat to Ngo’s west. They take an aggressive tack, moving toward the Phoenix Hawk and firing on it. 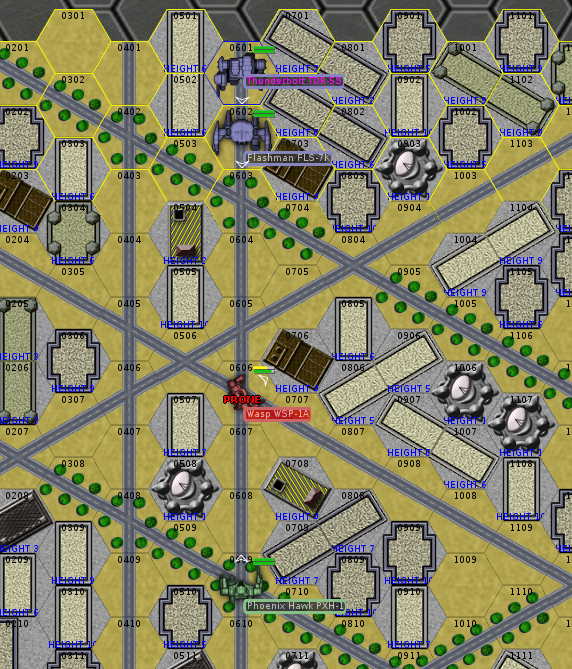 Rook hits with most of her weapons, while Double Dog does a lot of missing. He hits with one medium laser, though, which is enough to pierce the Phoenix Hawk’s center torso armor.

Ngo exchanges ineffectual fire with the enemies on her side of the map.

Drake deploys behind Ngo. As expected, the enemy gets out of his line of sight, except for one poor, unfortunate Hetzer assault gun a full 18 hexes away. He’ll take that shot.

On the other side of the map, Rook and Double Dog continue to hammer the Phoenix Hawk. 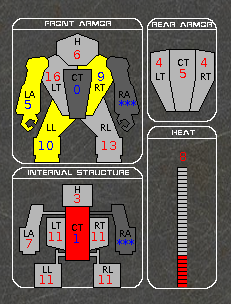 At maximum range, Drake hits with two of his three PPCs. Putting him in the Awesome is basically cheating. If he can see it, he can hit it; if he can hit it, he can kill it.

The Phoenix Hawk dodges behind Double Dog, but Rook still has a clear shot. Drake is set to take some fire, as enemy vehicles roll out into the street to engage his mech, but he can handle it. 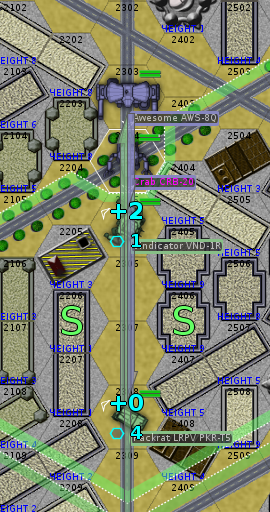 Drake and Rook tie for first blood. Drake bags a Packrat patrol vehicle, while Rook gets the Phoenix Hawk. Ngo kicks the Vindicator.

Drake, who can’t back up owing to the heavy fog, remains stationary, aiming for the Vindicator. (It’s inside his PPCs’ minimum range, but he’s a good enough gunner to manage the to-hit penalty.)

On the other side of the map, Rook and Double Dog slowly make their way over to the rest of the fighting.

Drake takes moderate damage, but manages to stay vertical. The Vindicator does not. Ngo kicks it again for good measure.

Drake moves up, hoping to kick the Vindicator into submission.

No need. The Vindicator pilot, while attempting to stand, falls down, and… 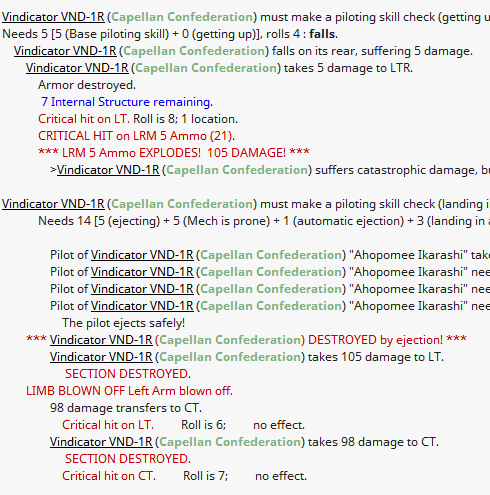 I’ll take it! Ngo, who did the last damage to the mech, gets credit for the kill.

Drake has a shot on the LRM Scorpion hassling the other members of the Heavy Lance, so he takes it. Rook and Double Dog still can’t shoot at anything. Ngo can, but she’s very unlikely to hit.

Cadre Lance takes the field! They’re staying mostly out of the way, though Linebuster leads the way. 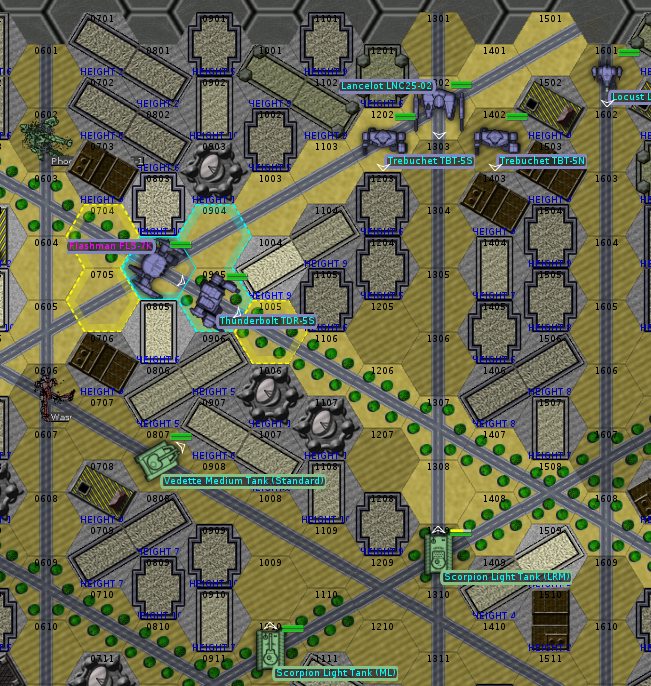 Once again, buildings block Drake‘s line of fire. The LRM Scorpion he tagged last round is about to die a brutal death, though. Rook gets credit for the kill. Woad scores a hit, too.

Cleanup at this point. We have a tremendous advantage in firepower and survivability.

Cadre Lance gets to fire its weapons in anger; merely showing up for battle is better for a pilot’s skill than a good bit of training.

Drake finishes off the Hetzer he was shooting at earlier. Ngo bags a Scorpion, and Linebuster gets credit for two vehicles.

None to speak of; the enemy didn’t make it through anyone’s armor. Nobody was injured, either.

… and before we can do much more than replace damaged armor, there’s another battle.

This one’s objective is hide and seek: kill half the enemy while losing less than a third of the Opinionated Bastards’ deployed force. Or, as I fully expect to do again, destroy the enemy utterly.

The enemy forces this time are a bit heavier than before. Almost everything on the field has something to be cautious of: an AC/10 on the Po tank, PPCs on the Vindicators, AC/20s on the Hetzers, and a large laser on the Grasshopper. Once again, Heavy Lance and Cadre Lance deploy. 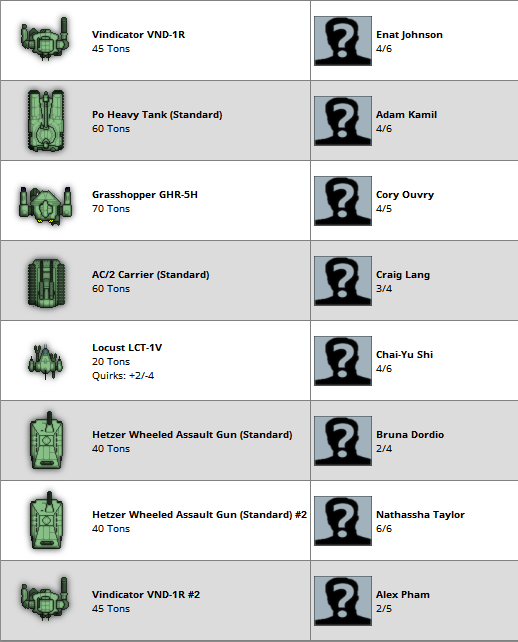 The map is quite small, a 15×25-hex affair with a lot of variation in height. That helps balance out the numbers disadvantage; we can use the terrain to take cover.

Again, it’s a scouting deployment, so Ngo deploys first. She’s at the northeast corner of the map. The allied FedCom mech, a Commando, deploys near the center of the eastern map border.

Ngo takes hits from four of the five AC/2s mounted on the AC/2 carrier, and more damage than that from one of the Vindicator’s PPCs. Combined with a few LRMs, that’s enough to knock her mech over, but not before she scores a critical hit on the AC/2 carrier, killing its crew. First blood comes early.

Rook and Double Dog deploy on the southeastern corner of the map, and open fire on one of the Vindicators with moderate success. Ngo stumbles, but manages to stand, and moves quickly to join her comrades to her south. 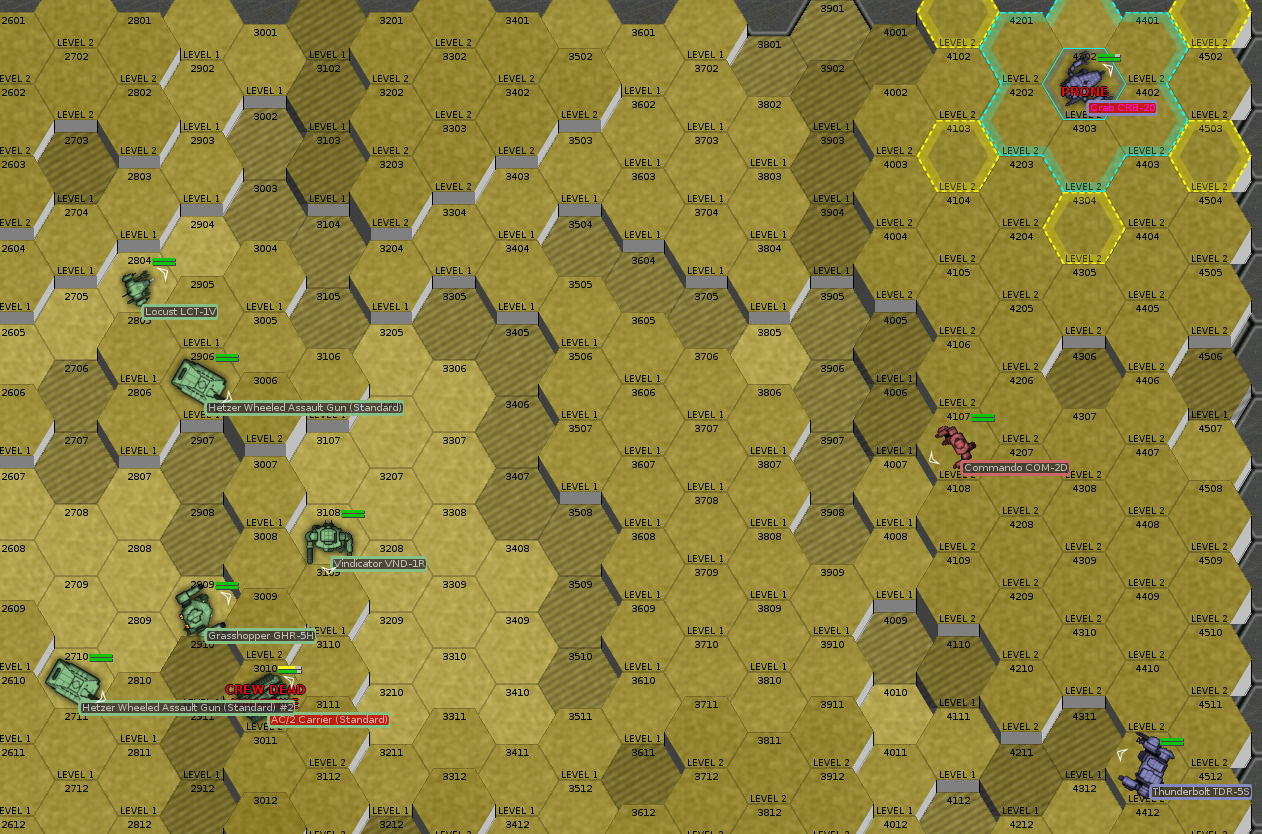 Drake takes the field. The entirety of Heavy Lance fires on the enemy Grasshopper; Drake hits with all three PPCs. The enemy mech falls.

There’s very little movement going on. The Opinionated Bastards have a good position, screened in part by the hill, and the enemies don’t want to get any closer, either. Everyone focuses on the Grasshopper again; it’s the biggest threat and the easiest to hit. It falls down a second time. 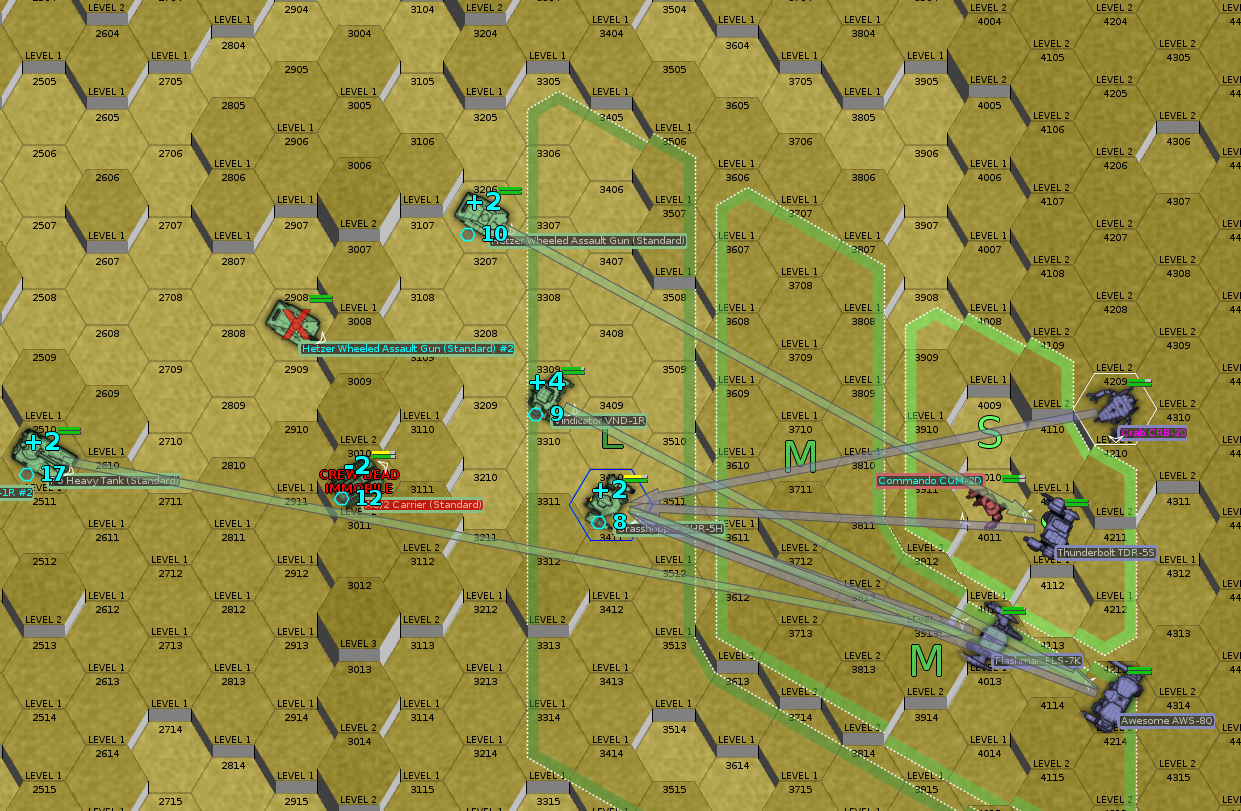 The Grasshopper stands again and jumps closer, into medium laser range. *Drake and Rook will take another crack at him, while the other units split their fire to start working on the Vindicator next door.

Drake takes a hit to his gyro through the armor, and one of the Hetzers scores on his right arm with an AC/20, damaging one of his PPCs.

The Grasshopper pilot ejects after taking some engine, gyro, and actuator hits. That’s excellent news. We didn’t shoot out its core or destroy its limbs. If we can get it as salvage, we can probably save it.

The next most dangerous targets are the Hetzers and the Vindicators, so that’s where we aim next.

Rook takes out the first Hetzer, with assists from Drake and Ngo.

Cadre Lance arrives. Most everyone stays behind our protective hilltop, although the whole formation slides slightly southwest. The remaining Hetzer has one of the better gunners left on the Capellan side, so we’ll aim for him first. 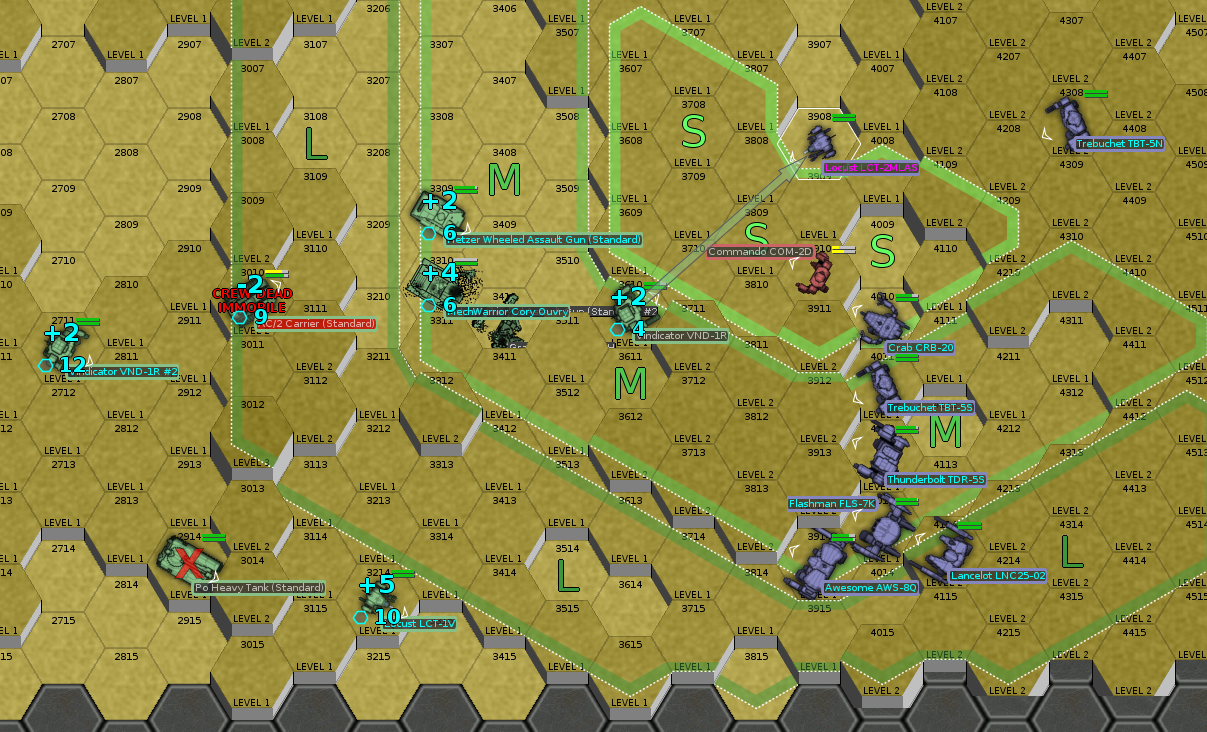 Severe, moving to fire on one of the Vindicators, takes severe damage, and loses control of her mech. It falls. That’s no good. On the other hand, it’s also behind a hill, so by falling, it’s now out of the line of fire.

Rook scores another kill, this time on the Hetzer.

The enemy is below half strength, which means we win; I’m going to take a bit more time to blow stuff up, because it’s going well and, and the more that’s dead, the more likely we are to get a crack at that Grasshopper.

Drake loses his right arm to enemy fire, but that’s okay. We can patch him up. We have the parts.

Rook notches yet another kill, this time taking down the Locust south of our force. Double Dog gets in on the action, destroying the Po heavy tank with a hit to the ammunition store.

Cleanup goes well; all we have left are the two Vindicators, which are looking rather worse for the wear. Rook takes a hit to the gyro, but is otherwise okay. Newcomers to the killboard Woad and Euchre each account for one of the Vindicators. Congratulations! 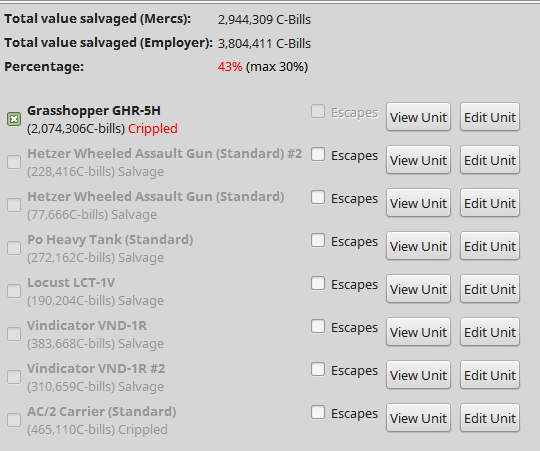 We score the Grasshopper! (We also took a Phoenix Hawk in the first battle.) The Grasshopper can be repaired; the Phoenix Hawk is only worth its weight in parts. That puts us at a little north of 40% salvage instead of the negotiated 30%, so we’ll have to tread lightly on the next mission or two. 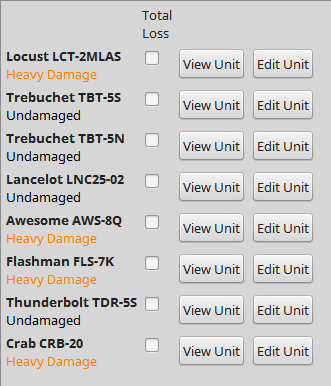 Nothing is out of commission. Heavy Lance needs some repairs. The Awesome’s gyro turns out to be a total loss, but one of the spares we have fits. (I’m still not at all sure how to figure out which of the four different kinds of gyro a given mech requires.)

Nothing else to report on the damage front, except that we can’t fully repair the Grasshopper—one of its jump jets was destroyed, and we can’t order a new one on this contract.

Despite the damage to our mechs, none of our pilots were wounded. 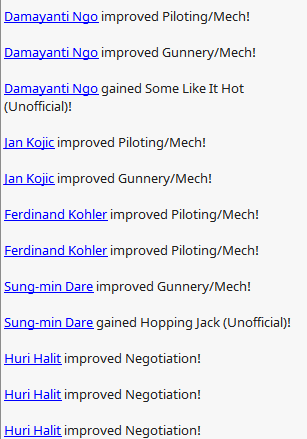 Ngo is now a Veteran, with 4+ piloting/3+ gunnery. Her new trait, Some Like It Hot, allows her to ignore the -1 to-hit penalty for mild overheating, which is useful. The Crab generates a lot of heat.

Ker-Ker also trained to 4+/4+. Woad and Euchre are both 5+/5+ now, which is still technically Green. Next time they raise a mech skill, though, they’ll be Regulars. 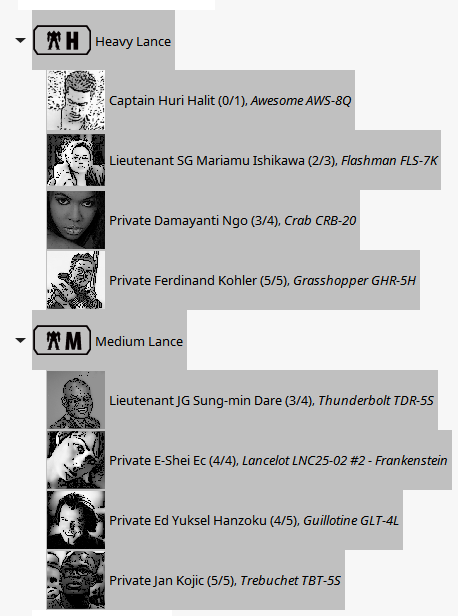 Mech assignments and organization shift a bit, since I had to throw together an undamaged lance to deploy following the mission above.

Woad steps into the Grasshopper and joins Rook, Drake, and Ngo in Heavy Lance. Medium Lance is now Double Dog in the Thunderbolt, Ker-Ker in the Frankenstein Lancelot, Hanzoku in the Guillotine, and Euchre in the TBT-5S.

Linebuster is still in charge of the rookies in Cadre Lance, whose ranks now include Wojtek, taking Woad‘s previous ride, the TBT-5N.

Rook leaps out to a commanding lead, followed by Drake and the still-unclaimed Private Ngo.

It is now November 5, 3050. I stopped here because there’s yet another battle planned for tomorrow, another Hide and Seek. See below for more information.

Our current balance is 5.225 million C-bills.

We’re out of spare large lasers, and we only have gyros in the two-ton size at present. Owing to combat in orbit, no resupply is possible this month.

The next mission sees us facing an interesting force: no vehicles whatsoever, but two full lances of mechs. The expected Capellan force is primarily light mechs, with some Vindicators and a Wolverine expected. Medium Lance was deployed and therefore must face the enemy first. Given the current distribution of pilots, I’m tempted to bring both Cadre Lance and Heavy Lance along for this deployment. Both will take a while to arrive on the field, since none of our lances are what you’d call fast, but I’m uncomfortable leaving Heavy Lance to face twice its number alone.