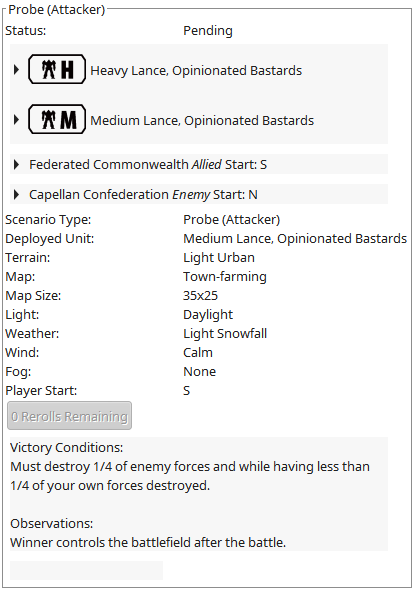 On the first of October, unit intelligence receives reports of a Capellan concentration near a town fifty kilometers from our field base. The Medium Lance, in the field, moves to probe the town. The Heavy Lance reinforces them.

The enemy is, as expected, poorly equipped. Capellan forces arrayed against us include a Blackjack, a Flea, and six vehicles, including a pair of Vedettes and a Saladin assault hovertank. The Medium Lance deploys with a Phoenix Hawk, a Lancelot, a Vulcan, and the Locust IIC.

Ker-Ker is late to the battlefield, and will deploy before round 2. Sergeant Milspec Ortega, in his first battlefield command, deploys on the southwest of the rectangular battlespace. (It’s 25×35 hexes.) The weather is good. The battlefield is split down the middle by a town; trees and small lakes dot the landscape.

Along with Milspec are Privates Yuksel in the Locust and Private Jamil in the Vulcan.

The FedCom liaison mech is a Commando, which deploys to the east of the Medium Lance. The Capellans deploy to the northwest and northeast of the town, in two divisions. Facing us to begin with are vehicles: the Vedettes, the Saladin, a Pegasus hovercraft, and a J. Edgar light hover tank. (Yes, the J. Edgar Hover tank.)

As might be expected, Private Yuksel charges into the battle with a crazed cry over the radio. Milspec and Jamil play it a little more coy, moving more slowly to get better shots off at the approaching hovercraft. 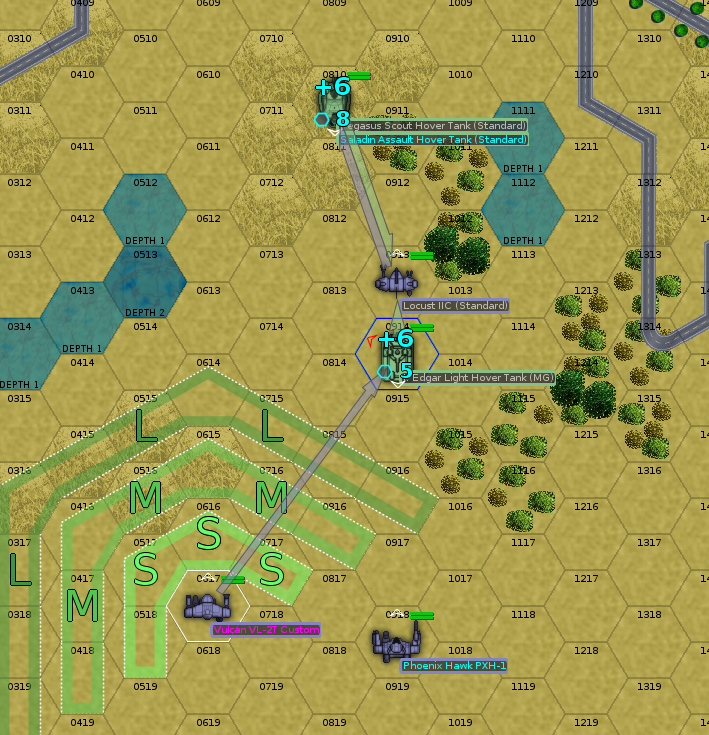 Yuksel, however, is the only one to score any hits. One of his ER Small Lasers carves into the forward armor of the Pegasus. In return, he takes a few SRMs to the side.

Ker-Ker takes the field, moving up toward the enemy to bring the Medium Lance’s heaviest weapons to bear. Yuksel falls back toward the rest of the lance, and everyone aims for the AC/20-carrying Saladin hovertank.

Unfortunately, Yuksel is the primary target for the Capellans. The Saladin, which managed to close the range with him due to the annoying mobility of hover vehicles, blows a hole clear through the Locust’s center torso. It falls to the ground. It looks as though our mysterious Clanner got his wish, an honorable death in battle. 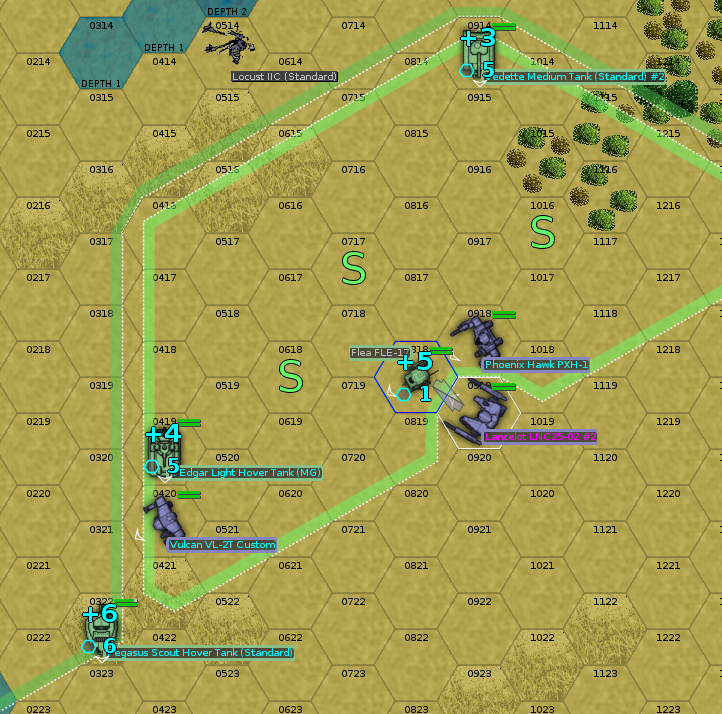 The Capellan Flea has managed to get in close, which is a mixed bag. It means more enemies nearby to deal with, but the Capellan pilot stopped directly in front of Milspec’s Phoenix Hawk and Ker-Ker’s Lancelot.

Jamil is in a bit of a tight spot now, alone between the J. Edgar hovertank and the Pegasus scout tank. Fortunately, he manages to evade serious damage. Ker-Ker and Milspec don’t do a great job at knocking out the Flea with weapons fire, but they’re both in melee range. Milspec’s kick knocks it down, falling destroys its left arm and torso, and Ker-Ker’s kick removes its right leg. She gets credit for the kill.

Down a mech and now suffering from light to moderate damage across the board, the Medium Lance falls back to the west. They’ll keep on the move, hoping to dodge the worst of the enemy fire until the Heavy Lance arrives to really lay down the hurt. 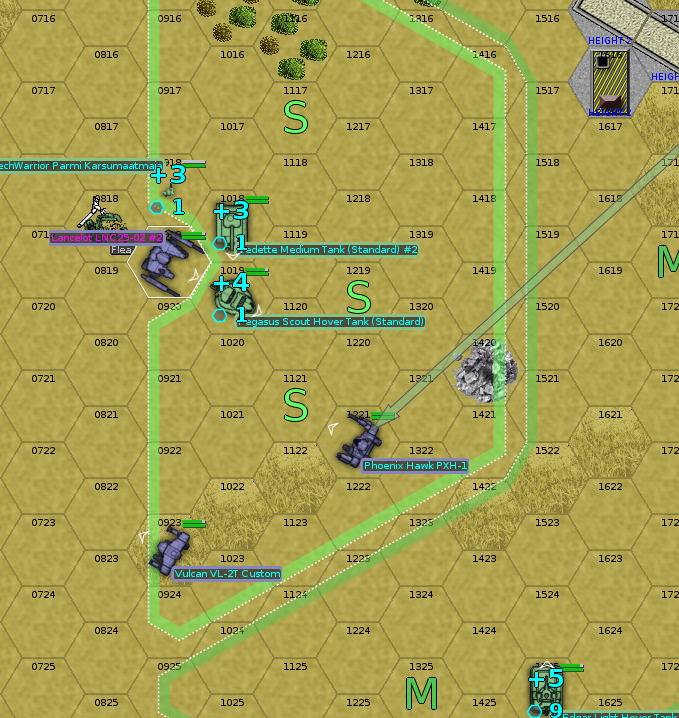 Ker-Ker finds herself in excellent position to beat two enemy vehicles. She stays more or less put while the two medium mechs jump to a better position. Even with the jump jets, they aren’t very well placed. The enemy’s vehicles are all lightweight hover vehicles; they’re more maneuverable than our mechs.

Ker-Ker hits the Vedette but takes a few SRMs for her trouble.

The hover vehicles, between the enemy’s luck on initiative rolls and superiority in numbers, continue to drive circles around our mechs. Hopefully we’ll land some good hits this round; the Pegasus with its annoying SRMs is right in the kill zones for the Lancelot and the Phoenix Hawk. 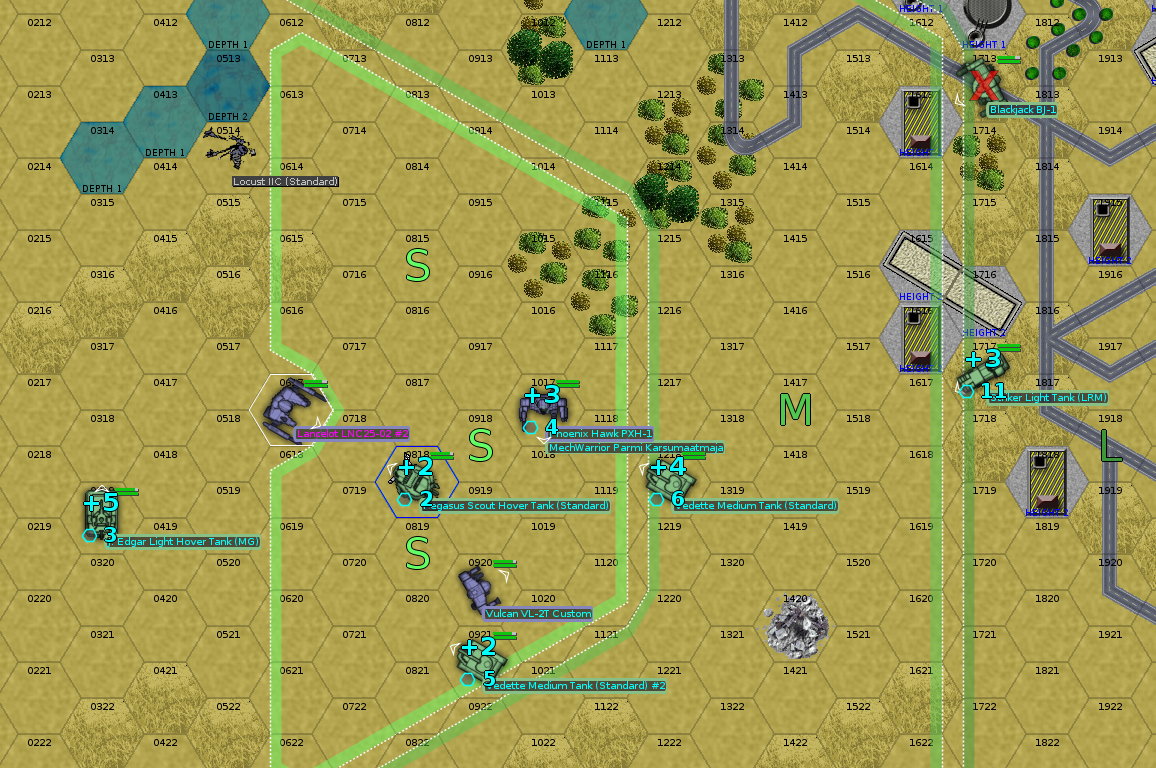 As weapons fire, I’m a little concerned about the number of guns pointed at Ker-Ker and the Frankenstein. And I am correct to be! The gyros can’t take the stress, and the Lancelot falls. Fortunately, Ker-Ker remains conscious; she can attempt to stand next turn. Unfortunately, the impact dislodged the Lancelot’s left arm, and some damage leaked through the center torso armor to hit the engine. It’s still functional, but the Lancelot isn’t moving quite as fast anymore.

The good news, at least, is that Milspec’s weapons fire immobilized the Pegasus, and can leave it behind while we make a tactical withdrawal to the northwest.

The medium mechs stand by the Lancelot, screening it as best they can. 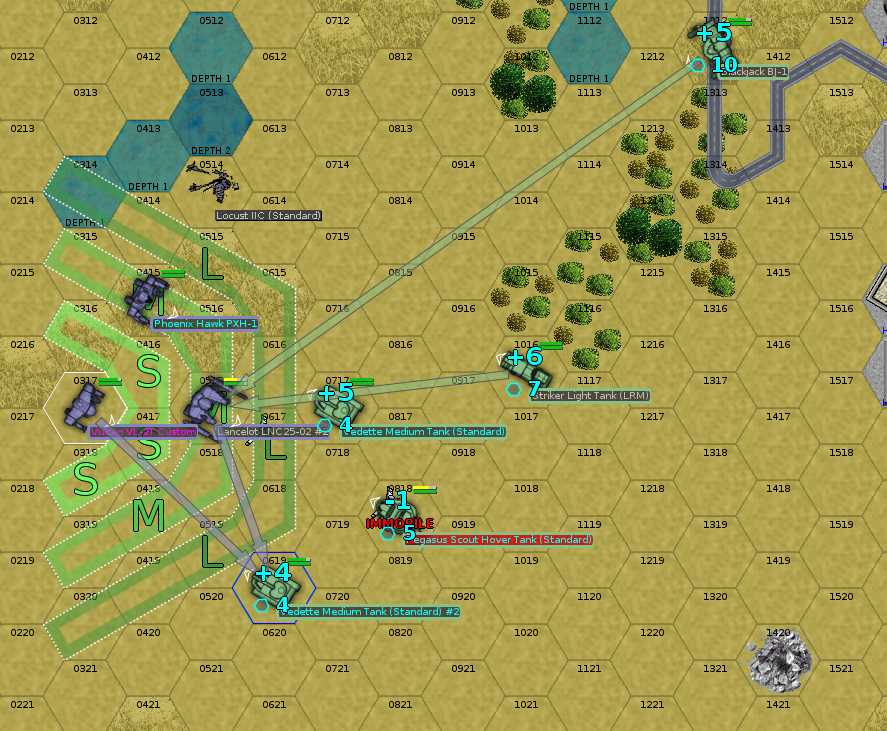 Ker-Ker and Jamil shoot at the damaged Vedette. Milspec takes his chances on destroying the immobilized Pegasus. Neither see great success.

Ker-Ker has managed to lose both her Large Lasers. We retreat to the west of the small lake in the earlier screenshots, beset on all sides. 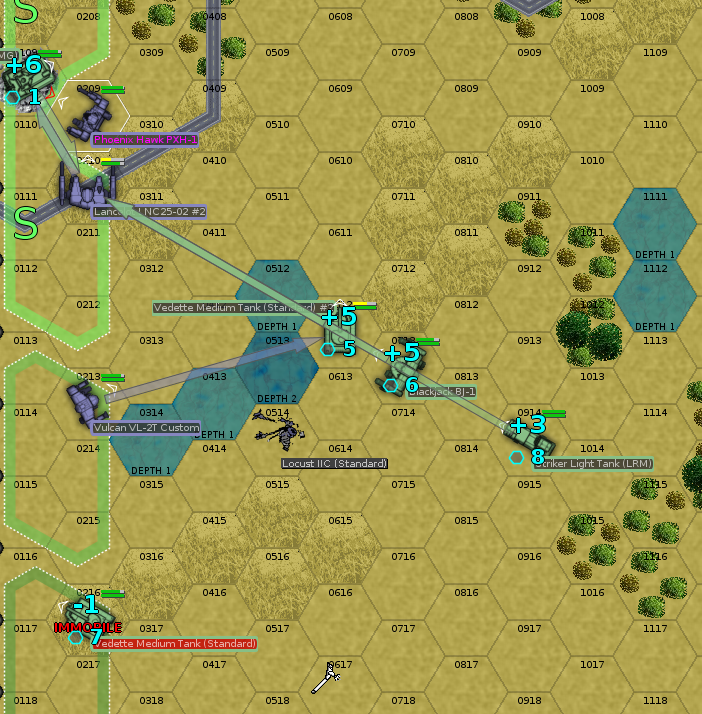 Milspec can’t fire this round without risking heat trouble—a major flaw in the Phoenix Hawk’s design—so it’s all on the Lancelot’s medium laser. (Ker-Ker won’t fire the PPC, her remaining weapon—the range is too close, and she definitely can’t risk it blowing up by firing with a disabled field inhibitor.) Ker-Ker hits a nearby Vedette in the side and manages to immobilize it. Given that Jamil is currently standing on top of it, that suggests some high kick potential. Jamil acquits himself well enough, too, hitting the Vedette with an AC/2 and a medium laser and scoring on the immobilized Vedette at his feet with a solid swing from his Vulcan’s left leg.

Ker-Ker is more or less running for her life now, being out of center torso armor. The mediums continue to screen as they can. The heavy lance arrives after this round.

Ker-Ker makes it through with only minor damage, happily. Milspec kicks a Vedette, but doesn’t make it through the armor.

Cunningly, the enemy uses forest to screen itself from Drake’s PPCs. He can still hit the Vedette running away to the north of this picture, and that’s what he’ll do. Rook trains the Flashman’s Large Lasers on the disabled Vedette in frame. The two medium mechs from the Medium Lance focus on destroying the J. Edgar hover tank still hassling Ker-Ker. Double Dog is lacking in long-range weapons, with only a Large Laser and an LRM-15, which he trains on the LRM tank shooting at him. Private Ngo, poorly placed, can’t shoot at anything for any real effect. Her guns will have to wait until next turn to come into action. 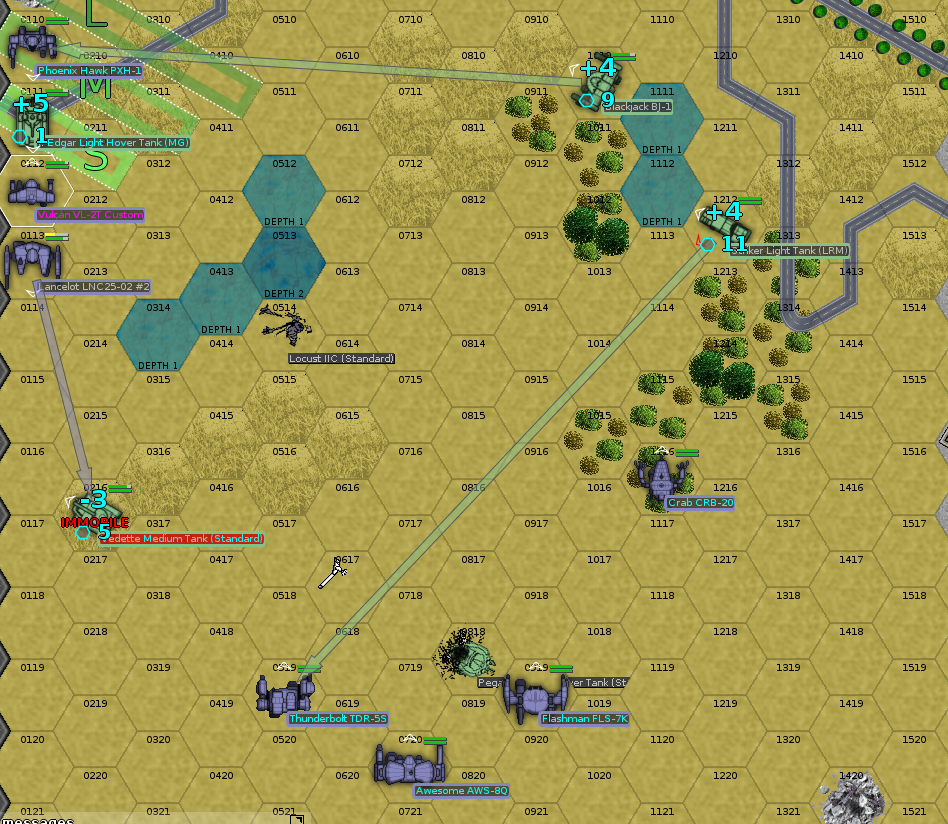 Ker-Ker turns around and runs south now, toward the comfortingly deadly guns of the heavy lance.

The remaining mechs line up; it’s going to be a brawl, and we’re going to win. Drake and Private Ngo focus on the Blackjack; Rook lines up on the J. Edgar tank, and Double Dog takes aim at the Striker LRM tank. Further north, Jamil and Milspec look to beat up the remaining Vedette, not pictured in the screenshot. 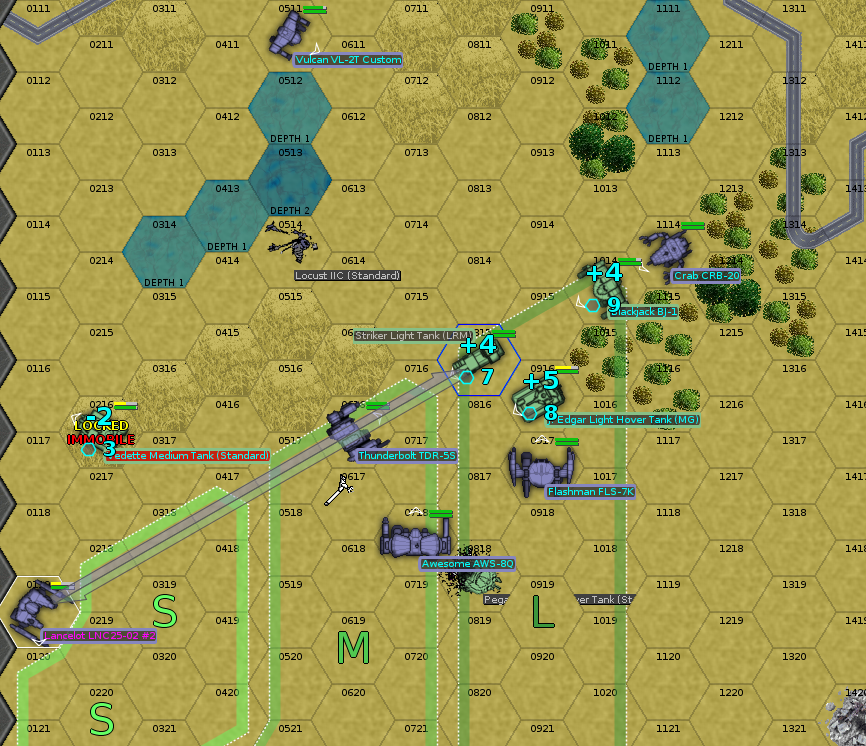 Between her lasers and the foot of her Flashman, Rook knocks out the J. Edgar tank. Drake softens up the Blackjack, and Ngo, moving behind it, destroys its center torso with large laser fire and a solid kick. Double Dog nearly takes down the Striker; its crew is stunned and its turret locked.

The Striker, unfortunately, takes down Ker-Ker’s Frankenstein, missiles impacting around the head and shoulders. Somehow, the autoeject system gets her out in time.

The Opinionated Bastards mop up. Jamil scores the killing blow on the northern Vedette; Double Dog gets it on the immobilized one south of the lake. Private Ngo accounts for the Striker light tank. 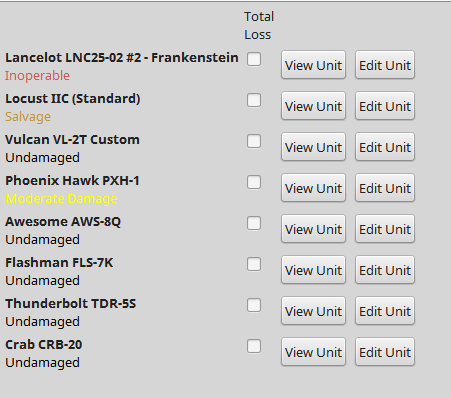 We came out of this one in decent shape. It’s a shame we lost the Locust IIC so quickly. Once again, the Frankenstein is rebuildable, although it’ll need a new head. The administrators are groaning already, but it does look like they can get it done; the FedCom forces can get a supply drop to us.

Two pilots are wounded: Milspec, who should be right as rain in a week or two, and Ker-Ker, who, among other things, has a concussion and a broken collarbone. The Opinionated Bastards should have her services back in three weks or so.

Surprisingly, Private Yuksel survived the death of his Locust IIC, and emerges from the cockpit as we’re cutting it open. He seems displeased by the idea of salvaging it.

Finally, the FedCom Commando liaison mech was destroyed, which isn’t earning us any good will with the brass.

Since BattleTech is brutal to pilots, I’ve taken the liberty of assigning each claimed pilot two Edge points. In the BattleTech RPG, Edge points are used to reroll results; here, they represent your luck. If you die in battle, I’ll deduct one Edge point from your pilot and keep you alive after the battle. (Ker-Ker now has one Edge point; everyone else has two.) If you don’t have any Edge points left, that’s that. You can buy edge points back for 10xp. 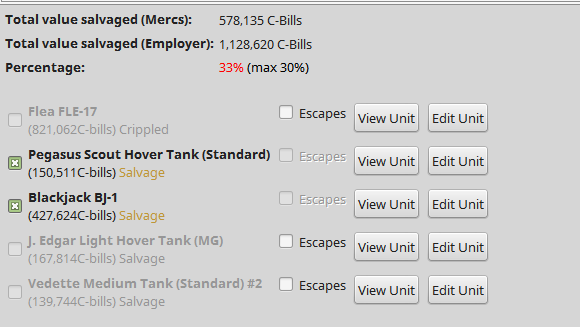 The Flea could be salvaged and returned to service, but it would exceed our salvage rights by 18%, which our employers are not likely to be happy with. Instead, I take the Blackjack (we can’t fix it up, but it does have a bunch of medium lasers we can take, and some AC/2s we can sell), and the Pegasus scout hovertank, which has a medium laser and some SRM-6 launchers, and can be sold for a decent penny.

In all, we rake in about 800,000 C-bills after the mission, counting battle loss compensation (primarily for Yuksel’s Locust IIC), prisoner ransom, and sale of stripped vehicles and mechs.

It is now October 26, 3050. Elsewhere in the Inner Sphere, the Clan invasion has advanced rather dramatically in the last few months. 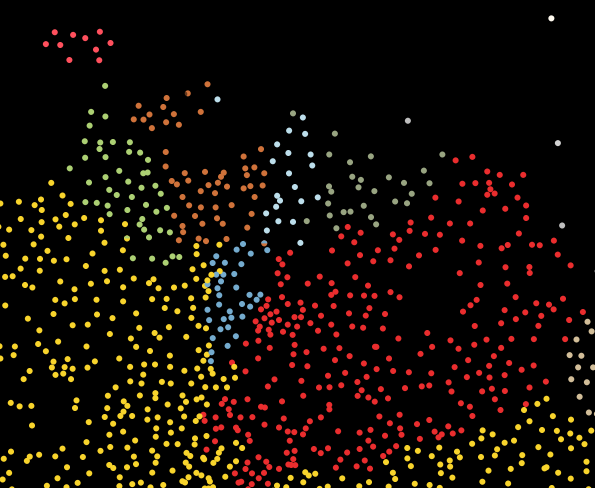 We’re one month into our five-month contract, and the employer is happy with us so far despite the loss of the Commando in the prior mission.

The Heavy Lance deployed in place of the Medium Lance while the latter was being patched up. There’s a new mission on the docket, a recon raid against another mixed Capellan force. The mission victory conditions require us to move to the far side of the map, stay for two rounds, and return. I think, given the Heavy Lance is deployed and the enemy force is all light and medium mechs and vehicles, we should deploy a second lance and make our reconnaissance in traditional Steiner fashion. (That means blowing everything up.) 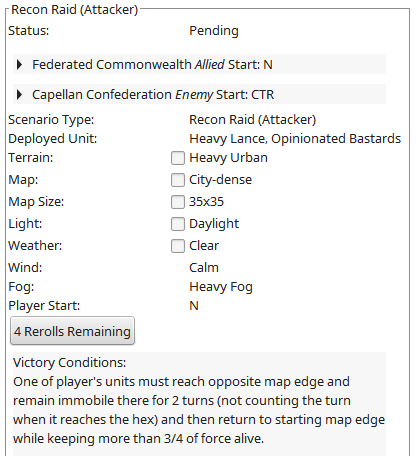 We’re doing all right. Thanks to quality administrators and good support from the Federated Commonwealth, we were able to obtain a spare Lancelot head for the Frankenstein.

With the exception of the dead Locust, the Opinionated Bastards’ mechs are all in fighting shape. 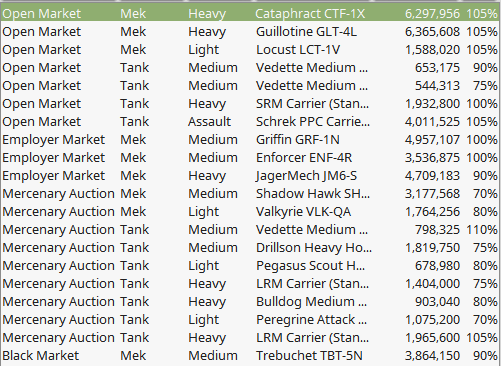 That’s an SHD-2H Shadowhawk. Sorry for the truncated label.

Being down a unit and in good financial shape, it might be a good time to consider a new mech. Here’s what’s on the market right now. 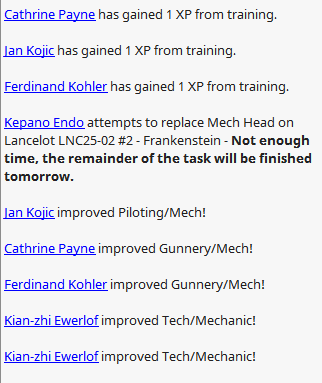 The Cadre Lance is serving its purpose; Woad, Euchre, and Severe all improve skills this month. (At 1xp per week, though, it’ll take a year or two to get them to 5+ piloting/4+ gunnery regulars.)

Please comment on the upcoming battle, if so desired, by Tuesday. I’ll be playing it then; it takes longer to write up these updates when there’s fighting. I’ll likely wait a little longer before playing out the rest of the month.