Hasek10 presented a proposed reorganization, but discussion is still ongoing. Continue the discussion, and we’ll finalize our organization before the next deployment.

A strong consensus emerged on taking the money, packing up, and heading out, so that’s what we’ll do.

Packing Up, Heading Out

The Opinionated Bastards remain on-world for the ceremony around the pirates’ surrender, mechs serving as the honor guard. The tech teams mothball our mechs, the administrators accept the final payment and pay out shares, and before we know it, we’re packed into a creaky old Buccaneer-class DropShip, headed for the jump point and, eventually, Piedmont.

On the way back, we make a very interesting pickup. An man odd in speech and dress, Ed Yuksel approaches Captain Halit at the Telos IV jump point and says his only desire is to die honorably in battle. He shows us a mech, an unusual-looking Locust painted with a red wolf’s head. Despite Halit’s attempts to weasel more information out of him, he says nothing else of consequence. 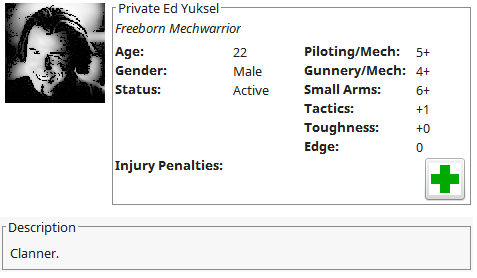 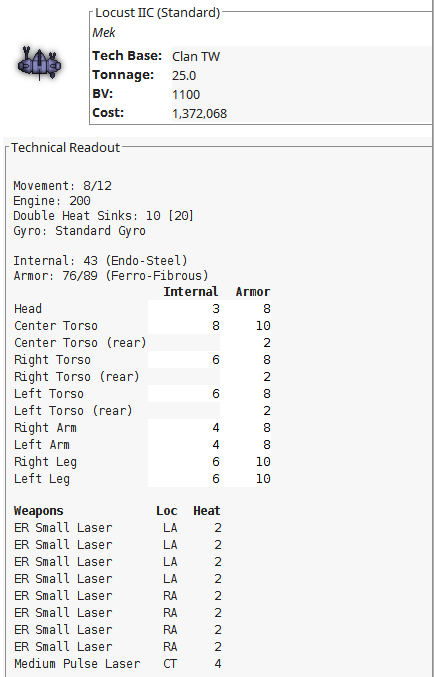 Eventually, Halit welcomes him aboard as a private and promises him combat aplenty.

That’s right, our first Clanner. There are several special rules around him (and other Clanners with which we may associate until, say, 3055).

First, his mech is packed with Clan tech, which we can neither obtain nor readily repair. I’ll figure out how to represent that mechanically when the time comes. He can’t be reassigned, and if he’s injured, nobody else is allowed to pilot his mech.

Second, he’s here early, before the Clans did much in the way of associating with the Inner Sphere at large. He must therefore be disgraced in some way, cast out by his people. Yuksel’s main goal (as mentioned) is to redeem himself with a fighting death on the battlefield. Whenever he’s deployed, he’ll fight just shy of suicidal.

Finally, since he has no connections to anyone, we won’t be required to pay out the cost of his mech on his death. If his mech is destroyed but he survives, he’ll expect another one. If we refuse, he’ll demand payment and hit the road.

We return to Piedmont in late June, and unpack the mechs for some training in between contracts. On July 1st, the following offers come in. (Note: I’m still tweaking the game settings to find contract generation options which are neither insultingly bad, like last time, or unbelievably generous, like this time.)

We have six contracts available, all of which have at least something to recommend them.

As ever, I’m partial to low risk, but we’ll see how the voting turns out.

I’m going to leave this in every post, because it saves me having to dig through old ones to find the up-to-date version.

The Opinionated Bastards are back to eleven mechs. We have supplies which enable us to embark on a mission with below-average parts availability, but I’d probably still want to bulk up the stocks a bit if we do.

There are several mechs for sale on the unit market at present, but they’re all on the black market, which has a one in six chance of turning out to be a scam. There’s a Thunderbolt, a Commando, a Centurion, and a Shadow Hawk; I’ll post variants and prices if there’s interest in purchasing a new unit.