After a brief intermission, we return.

Item #1 on the priority list, according to the readership, is a fast battleship. I cancel Magenta (she hasn’t been building for that long) and redesign her for 30-knot speed and 14″ guns. I cut half an inch from her belt armor to add half an inch to her deck armor, but in all other respects, she’s a copy of Marengo.

Breguet brings us a better medium bomber, which I buy, even though we just bought a Morane-Saulnier type—this one has better range and speed with the same bomb load.

The new, fast Magenta hits the ways, and I decide to throw in a new light cruiser, too: Surcouf, with 12 6″ guns, 32-knot speed, a seaplane, and dual-purpose secondary and tertiary guns. 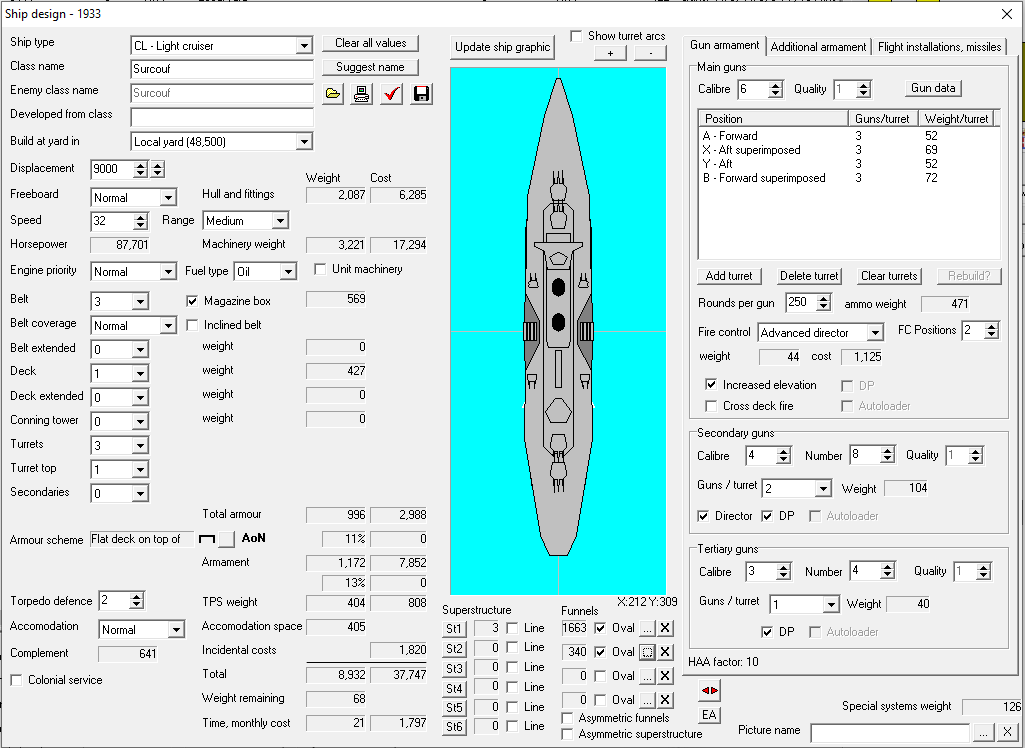 I’m trying to provoke Austria-Hungary into a war, but they’re resolutely opposed to the idea.

Our big buy of Epee-class destroyers are all in service now. Given that Austria’s destroyers are better than ours, I go for a new class: the Arquebuse, which helps close the gap somewhat. 6 main guns (against our previous best of 4), without compromising on other capabilities, and with an extra two knots of speed over the Epees. 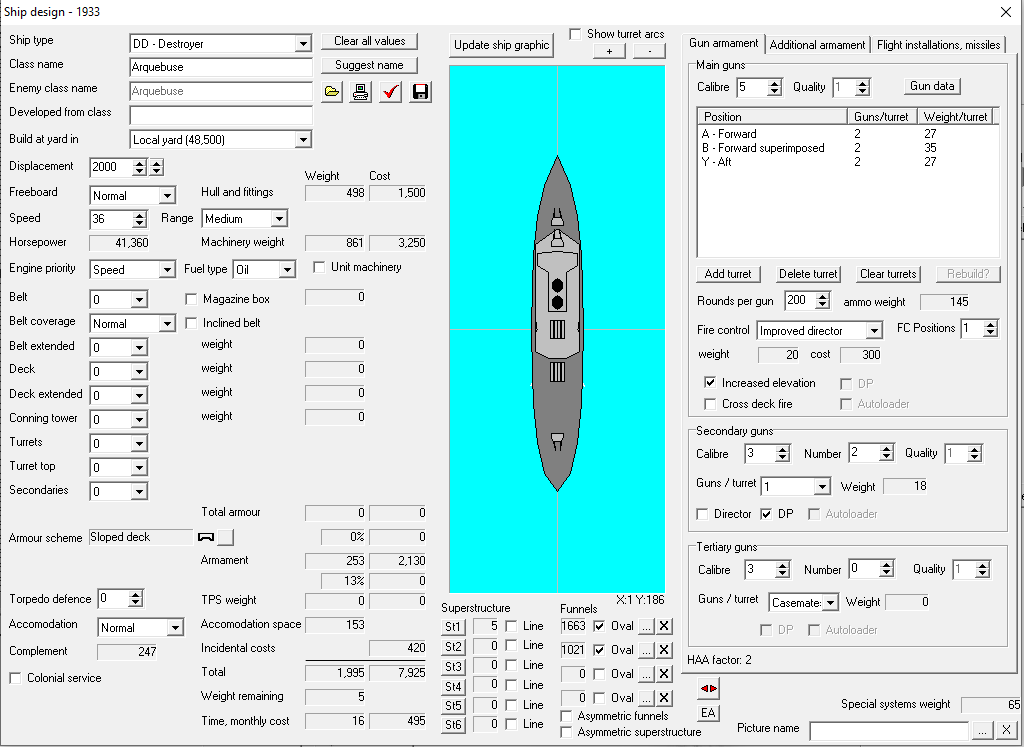 As Marengo enters service, an opportunity presents itself to cheese off the Austro-Hungarians, exposing a spy of theirs discovered in French territory. It pushes us to the brink of war.

Our fighters are looking a little long in the tooth, so I request some new prototypes.

I have the option to negotiate an alliance or push tensions. I choose to push tensions; unfortunately, Germany goes up and Austria-Hungary doesn’t, putting us on the brink of war with two powers.

No real news, except for this! I set it to high priority for now. Radar’s super-cool.

Liore et Olivier gets the nod for the new fighter, out of three choices with almost nothing to separate them. (Liore et Olivier’s entry is just as fast, tough, maneuverable, and punchy as the other entries, but has an extra few miles of range.)

Tensions with Germany go down slightly.

The war with Austria is so close I can taste it, but not quite there yet.

There are fourteen ships in the yards right now:

So, in four months, we’ll have money in hand for another capital ship, and again 10 months thereafter. Should we build battleships, carriers, or one of each? If battleship(s), 30-knot/14″ guns or 27-knot/16″ guns? (We could easily build a 30-knot, 16″-gun ship if we weren’t tonnage-limited, but alas, that is not the world we live in.)

To help guide your decision, a quick rundown of the European standings:
* In dreadnought ships, we have 279,700 tons in service or under construction, putting us behind Britain (613,000) and Germany (533,200) but ahead of Austria-Hungary (237,600) and Italy (189,100). Britain is actually behind Germany if you only count ships in service, but is currently building six dreadnoughts.
* In aircraft carriers, our 87,500 tons puts us behind Britain (165,000), but ahead of Italy (84,100), Germany (38,800), and Austria-Hungary (8,900). Joffre is still the champion on the ‘most planes on a single carrier’ leaderboard. Notably, we still haven’t developed dive bombers, and this technology chart suggests that it’s possible we won’t until 1938. Until then, we’ll just have to struggle along with torpedo bombers and licensed dive bombers.

Otherwise, the plan is to continue to badger Austria-Hungary, with an eye toward stealing Morocco from them. Anything else that ought to be on the docket?