Collating all the feedback as usual, I have four recommendations:

We now have advanced gun directors for our ships, making them yet more accurate, and meaning we have to install them on yet more ships. I think I might pop them onto the Rouen-class battlecruisers first, since they’re now marked obsolete.

Bearn enters service. Because we still, evidently, haven’t unlocked the secret to building our own dive bombers, I buy a license to build the British Gloster Goblin. Bearn‘s air wing is nine torpedo bombers, 18 dive bombers, and 19 fighters. Not bad. Maybe we’ll try another exercise this summer, or in summer 1930.

We make an important advance in fleet tactics: in large battles, aircraft carriers will operate in their own force, meaning that a) I can control them directly even if they’re out of sight of the battleship force’s flagship, and b) they’ll start well out of the way of the enemy, generally.

I use it on Joffre, a new aircraft carrier. 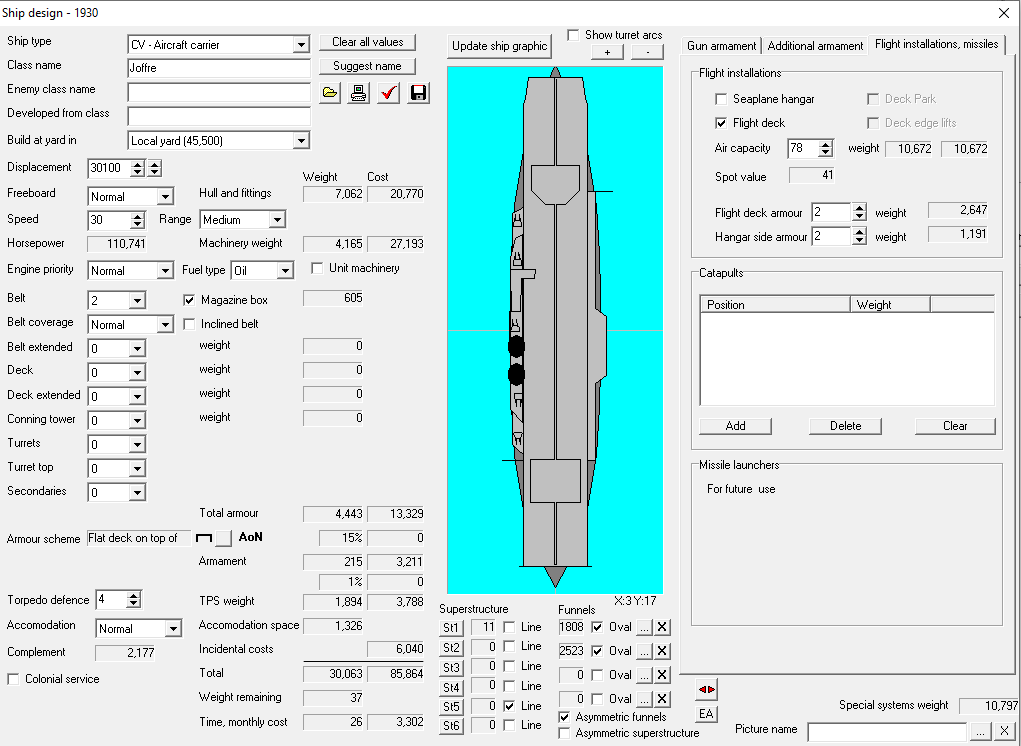 She’s not the fastest of carriers, but with a 78-plane air wing, she is quite a capable one.

We’ll lay down the first ship in five months.

I can just fit the rebuilds of Rouen and Nancy (to use advanced director fire control) in before Courbet and Marseille leave the yards, which I elect to do.

That way, it’ll be October, and I’ll be able to reserve some money the use of which we can discuss prior to the next update.

Since we have a pile of money sitting around, I upgrade some of our strategically-important airbases to 60-plane capacity. That group includes the one at Dunkerque, which is well-sited for wars with potential North Sea foes Britain and Germany, and the ones framing Italy and Austria-Hungary in the Mediterranean.

If you scratch the politicians’ backs, they’ll scratch yours.

Some of the money goes toward equipping some new squadrons on our new airbases. I’m reserving the rest until next month.

Tensions are highest with Britain and Austria-Hungary, at 4 and 5 (of 12 before war), respectively.

Our annual budget, 358,300 funds, is on par with Germany’s and only 20,000 less than Britain’s—our wars have been successful, between reparations and worthwhile colonies, at enhancing our monetary capacity to wage further wars.

At the moment, we’re building ten submarines and our new fleet carrier Joffre.

We didn’t get a new battleship laid down this update, instead electing to rebuild three ships (Marseilles and the two Rouen-class battlecruisers) and lay down Joffre.

Obviously, that would be a good thing to remedy over the next two years. So, what manner of battleship will we be building? A 30-knot ship with 14″ guns, or a 27-knot ship with 16″ guns? (At present, our battle line is good for 25 knots, or 26 knots if we leave Requin behind.) That’ll account for around 4,000 funds per month.

Of our obsolete battleships, Marengo is the only one left. We could rebuild her to 26-knot speed, given 14 months at 2,300 funds per month, or we could scrap her. Scrap her or rebuild her? Note we have eight other battleships to Germany’s nine (although Germany also has eight battlecruisers to our zero, and we’re far superior to Germany in naval aviation).

Whatever we do with Marengo, we’ll have ten months or so at the end of the update during which to build some new ships. A thoroughly modern light cruiser, with triple turrets, anti-air armament, and room for a scout plane will cost us around 1,850 funds per month, while a modern destroyer with 5″ guns, anti-air armament, and a huge pile of torpedo tubes will cost us around 450 funds per month. So, after Marengo‘s rebuild (or in place of it), we could build five new destroyers at once, or one new destroyer and one new light cruiser. How should we update our light forces: more destroyers, or a destroyer-cruiser mix?

Finally, we have two 27-knot heavy cruisers on hand which date back to 1919 and 1920. They’re too slow to play heavy cruiser in the modern era. We could scrap them, or we could convert them to light carriers. In the latter case, they’d be able to carry 24 aircraft a pop, and we could bump their speed to 29 knots, for a 12-month/2,180-funds rebuild—effectively, two light carriers for the price of one purpose-built new hull. What should we do with the Montcalms?