The votes are in, and it looks like we’re building, in about this order:

It’s a star-studded cast of names. Our Condillac is named Descartes, and our four submarines are Foucault, Volta, Bernouilli, and Ampere.

Italy’s newest heavy cruiser is an overmatch for our own. Granted, we only built ours because of that brief naval treaty before Italy decided it was time to get punchy.

I believe this is a few years in advance of history. The earliest arresting cables ran, if I’m reading these histories correctly, fore and aft along the deck, spaced about 9 inches apart and suspended a foot or so above the deck on leaf springs (like modern, transverse arresting gear). The purpose was less to slow planes down—they were generally small and light enough that speed wasn’t a problem—and more to keep them from being blown over the side by gusts of wind. When the plane landed, hooks on its landing gear would engage the wires and guide it in a straight line to a stop.

Good news, everyone! A minor crisis with Great Britain, which doesn’t even push our tension with them from green to olive, means we’re swimming in cash. Time for that new light cruiser design, I think. 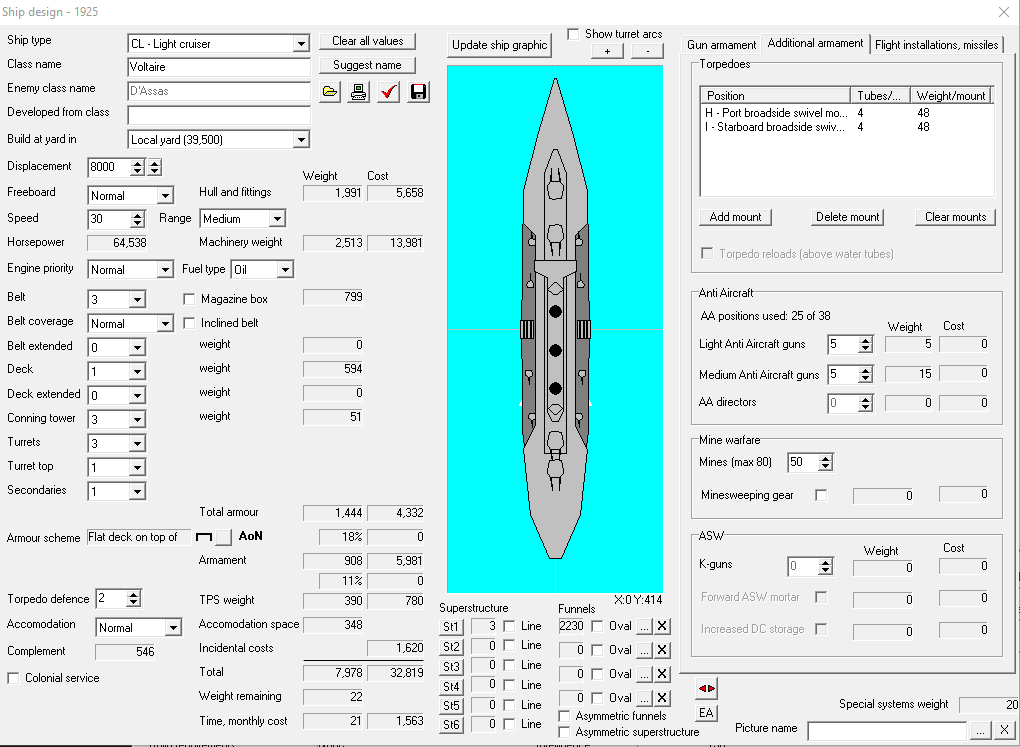 I’d hoped to get them up to the same speed as Italy’s forthcoming heavy cruisers, but it wasn’t in the cards.

Also, it’s June, and war still looks pretty far off, so let’s try a fleet exercise! We’ll even let this one stand without savescumming, unlike the last one.

On the Red Team (us), we have Amiral Charner and Commandant Teste, two light cruisers, and three destroyers. On the Blue Team are Ocean and Requin, along with a mirrored supporting force.

The mission starts at 4:24 p.m., which is not an ideal timeframe for our aircraft carrier.

Floatplanes launch from Commandant Teste, while Amiral Charner prepares a strike. If we spot the enemy soon enough, we’ll try one.

I end up launching Commandant Teste‘s extra floatplanes loaded down with bombs, too. Can’t hurt! 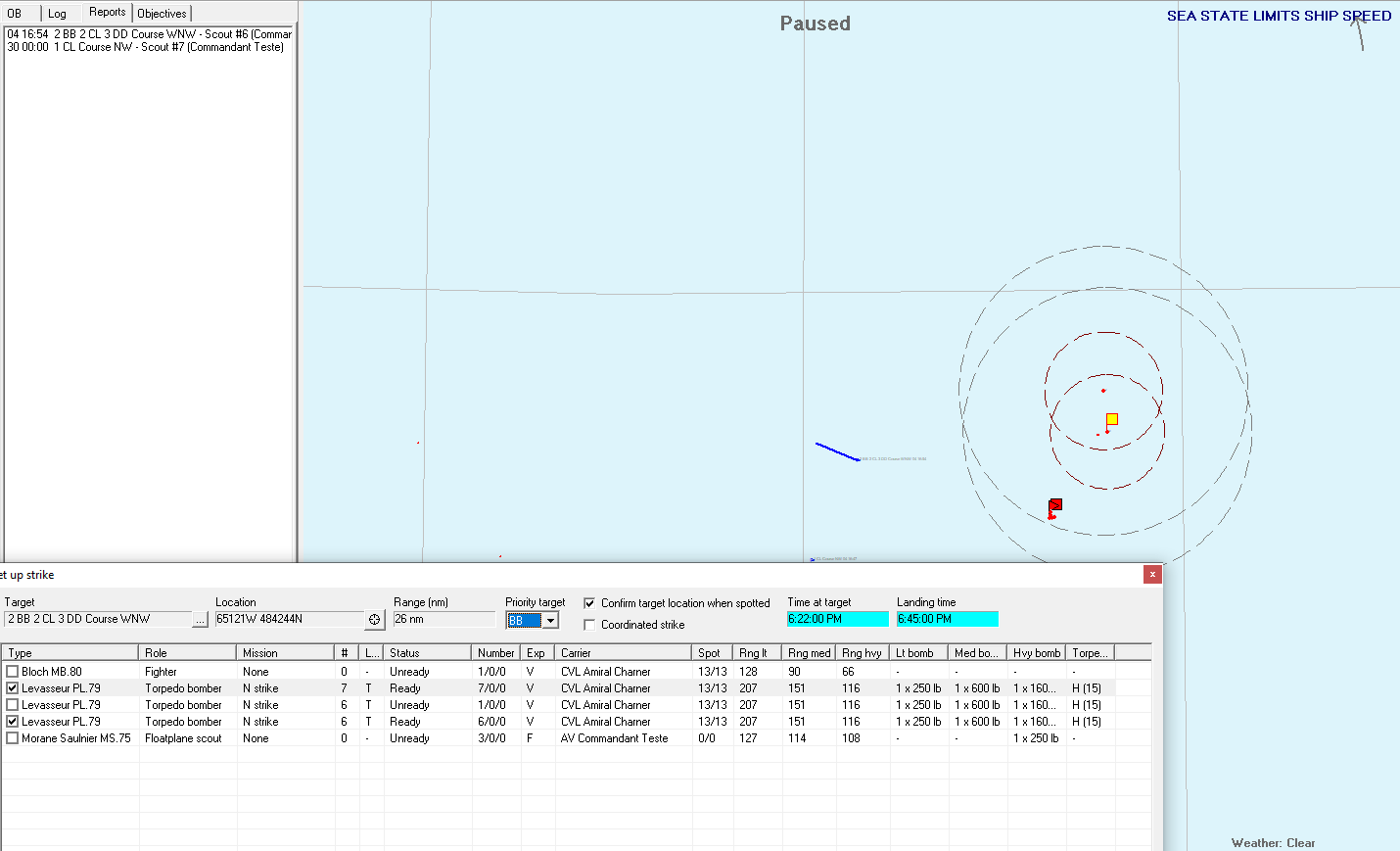 Here in the Air Formations window, you can see our various aircraft preparing to fly—Amiral Charner‘s torpedo bombers will be spotted to the deck in 12 minutes (they were readied in the hangar but not lined up for takeoff, to avoid crowding the deck).

The fleet turns to the northeast to keep distance between themselves and the enemy fleet.

Thirteen torpedo bombers are in the air. Commandant Teste‘s launch operations are a bit more complicated, involving cranes, stopping to put planes into the water, and the like, so that element of the strike will be a bit later.

Teste launches her seaplanes. Since it’s summer in the Bay of Biscay, dusk isn’t until 8:20 or so. We’ll still have daylight for aircraft recovery, an important factor. 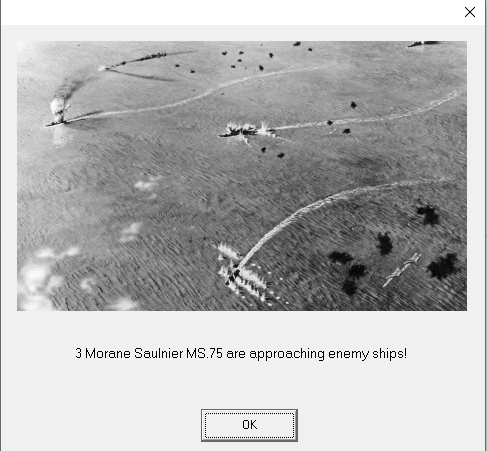 Those are the floatplanes, but the torpedo bombers are, according to my map, in the same area. (I’m not sure if fog of war applies to the reported position of friendly aircraft, but it would be just like this game if it did.)

The torpedo bombers find the enemy, and all thirteen start their attack run.

Two torpedoes hit one of the enemy ships. A few more aircraft remain to take their shots. A third hits a minute later.

Returning strike aircraft report one battleship heading south, instead of the two the enemy started with. We won’t know until after the exercise how well we did, but we might have got one.

I don’t think there’ll be time for a morning strike, but I’ll be staying in the area just in case I can get aircraft off the deck before the end of the scenario.

Twilight arrives, just as the last of the day’s CAP lands on Amiral Charner.

Twilight’s right around the corner. Soon, scouts will be in the air, so I’d better work out my plan. 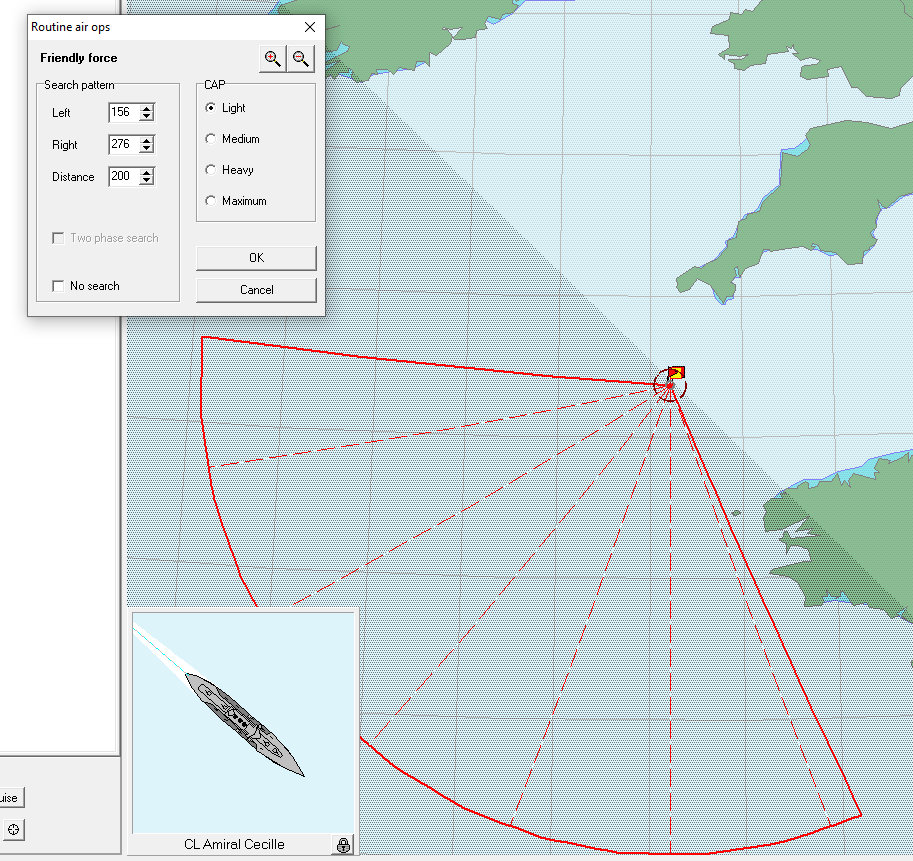 The enemy is, I think, thataway. If they ran for the coast (that is, a port, although none are technically available in this exercise), I don’t care. I don’t think they got around behind me into the Celtic Sea, so I’m not spending aircraft on scouts in that direction.

I don’t remember quite what the rules are for ‘planes in the air’, so we’ll see when it cuts me off.

Evidently, it’s ‘planes in the air with the enemy in sight’ as the cutoff rule. Oops.

Anyway, it also turns out that your floatplane carriers won’t launch scouting missions if their air wing’s mission has been set to something other than Recon, like it was when I used them for an air attack.

In the final reckoning, we get Ocean with one torpedo and Requin with two, causing light damage to the one and medium damage to the other. Not bad, for 1920s technology, but not a reason to cancel the battleship program altogether, either.

On the plus side, Ocean, Requin, Amiral Charner, and Commandant Teste are all now Elite-skill ships, and the exercise made Austria-Hungary a little touchy.

Holy long delay, Batman! The second half of last year was boring, though, so you didn’t miss much.

Holy long delay again, Batman! The first half of this year was more boring than the last. The only happening of note was our development of motor torpedo boats.

We learned how to make medium bombers a while ago, and Dewoitine has a doozy of a prototype for us:

Longer range than our flying boats by a long shot. They’ll make good land-based scouts going forward. I start a new request for torpedo bomber prototypes. Ours are looking a little long in the tooth.

I must have missed our development of full-size CV conversions (or we skipped that technology; see research note below), because we just developed full-size CVs. The first aircraft carrier you build has to have substantial gun armament, because naval design bureaus are unimaginative. To get that out of the way, I’m building a one-off. 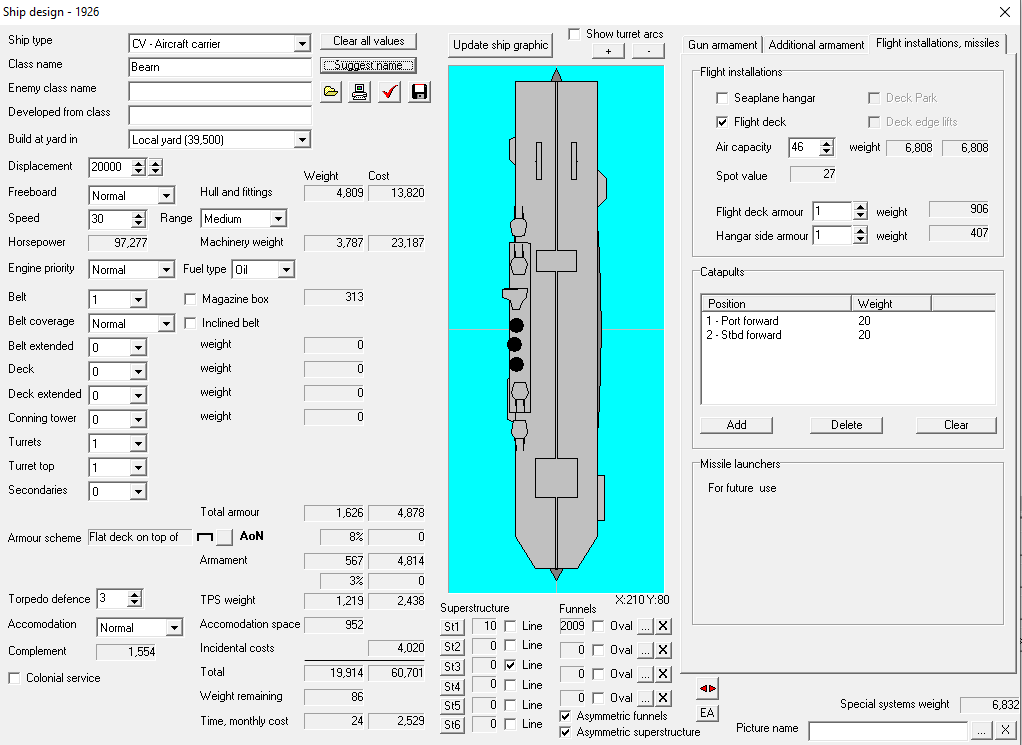 Named after France’s historical interwar carrier, Bearn (well, Béarn, but I don’t know if the game can do accented characters) carries a 46-plane air wing and no catapults. (The ones pictured I added before hitting the ‘check design’ button; we haven’t worked out aircraft catapults on carriers yet.) 30-knot speed should keep her out of trouble. Along with her 6″ main guns, she has a large battery of dual-purpose 3″ secondary guns in double turrets (another new research item), and passable AA machine gun armament.

Her flight deck and hangar sides are armored, an important consideration in tight seas. TODO: discuss.

Research note: some technologies in Rule the Waves 2 are marked as skippable—your scientists may simply move on to the next technology. Taking a quick look at the wiki, CV conversions are indeed in that category.

Nine months from today, we’ll have a free construction budget of 8,538 funds per month. 2,500 or so of those will go toward building Bearn. 3,500 or so are probably earmarked for the next battleship in the Ocean–Suffren series (which will be another incremental improvement of very similar design).

So, it’s time for another priorities question! What do you think is important as we careen toward the 1930s?

One thing to note: our fleet is no longer the fastest on the seas. We’re not the slowest, but we’re definitely middle of the pack nowadays. On the other hand, our two early-20s cruisers are much, much more heavily armored than enemy heavy cruisers, an edge we may be able to press in a war.

Speaking of rising tensions with Austria-Hungary, we could finally be getting the war we wanted from the start. Tensions with the Austrians are twice as high as everyone else, and on the border of yellow and orange. If we push them, we can get them into a fight, I bet, starting with cranking up spying to high.