On the advice of the readership, I’m doing two things with an eye toward saving money and modernizing our forces:

I’ll likely aim to build more light cruisers and destroyers in this update, although I also intend to keep one or two dreadnought-type ships on the ways to avoid falling behind in the arms race. A two-Mediterranean-power standard is probably not quite within our grasp, but I want to at least give it a try.

Blueprints for the Austrian Tegetthof-class, under construction, hit our desk. One thing to note is the relatively light armor. I’ve adopted the (real-world) German philosophy that a ship’s first business is to stay afloat, and so far that’s worked out.

Our two French naval engineers at the Parisian cafe have had the bright idea of a ship dedicated entirely to floatplane scouting. That option is open to us now, but I think I might be more inclined to request proposals for a floatplane scout, and then equip the next class of battleships with one.

It has been an exceptionally quiet few months. A few ships enter service, including the first batch of four of the new Harpon destroyers. Another six are on the way, along with three more of the new(ish) Lavoisier light cruisers.

Both designs are a little long in the tooth now, so the next batch of destroyers and light cruisers will be to a newer one.

Rising tensions in the Balkans (Germany again…) yield the budget to develop a newer class of 5900-ton light cruisers. The Troude is not armored as well as the Lavoisier, but has more torpedo tubes, more guns, and one knot more speed, necessary for her to keep ahead of some upcoming battlecruiser types.

Germany asks us to reduce the size of our shipbuilding program. I choose the more polite of the two ‘shove it’ options.

It, uh, backfires a bit. An arms treaty goes into effect, limiting all powers to ships of 15,000 tons or less and main guns of 10″ or less.

While this isn’t ideal, it does mean we’re in third place behind Britain and the United States in the dreadnought race, and we’re going to be until 1935. On the downside, our medium gun research is not great. Our 8″, 9″, and 10″ guns are all -1 quality, and I don’t think it would be wise to build a new pocket battlecruiser around those calibers yet.

Scrapping the illegal ships under construction makes us a ton of money, and with it, I embark upon quiet a large modernization program. We have five new light cruisers building, and twelve new destroyers, along with ten new submarines. It also seems like a decent opportunity to build a seaplane carrier or two. After all, we aren’t spending it on very much else.

At last, something to upgrade our battleships with. 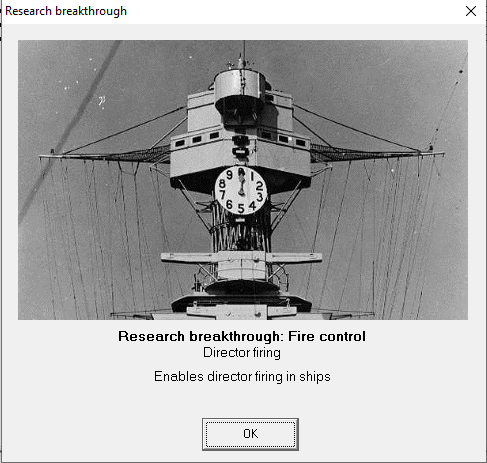 Along with the air wings for the two seaplane carriers under construction, that gives us 50 naval aircraft, a world-leading total.

Funds are a bit tight as our battleships go through the rebuild process, but we’re staying ahead of the game.

Now seems like a good time to spring for enhanced gunnery training. We have a large and powerful battleship fleet we can’t replace for another 231 months, and the last thing we want to do is lose it because of poor shooting.

An exceptionally boring two years (with the exception, perhaps, of the naval treaty) comes to a close.

Here’s our list of non-destroyer ships in current service. Of note, the two Redoubtables are missing because they’re being updated to director firing. Also, Lyon and Marseilles, originally constructed as battlecruisers, are now counted as battleships—24 knots is no longer battlecruiser speed.

That means that Tourville and Dunkerque will end up counting as battleships, too, when we rebuild them, unless I take the opportunity to upgrade their machinery for better speed. (If we want to do that, we should probably wait until 1920—we’ll be able to turn them into oil-burners, which will make them faster.) So, should I let them turn into battleships, upgrade their fire control and machinery now, or defer an update until 1920?

Also noteworthy: our original Tage-class light cruisers have all been retired, leaving the still-elderly Chateaurenaults as our primary source of overseas influence. New Lavoisiers and Trondes are on the way. It may eventually make sense to build another overseas-service light cruiser with extended range and colonial service equipment, especially given the lesser demands on the naval budget.

Finally, as for destroyers, we have 16 modern Harpon-class ships in service now. The older Pistolets and Balistes join them in active service, while the remaining Fauconneaus and Francisques are mothballed, ready for activation in case of war to take on trade protection duties. (Destroyers cost so little to maintain that there’s no reason not to hang onto them for this use.)

Under construction, we have the two Redoutables, as mentioned earlier, along with five new light cruisers and two seaplane carriers.

Future construction plans are a little up in the air. The naval treaty means we can’t build any new dreadnoughts. The 15,000-ton limit is pretty restrictive, and suggests that a new heavy cruiser program might be in order. A top-of-the-line, 28-knot, 9×10″-gun cruiser (the latter characteristic being the largest caliber armament allowed, the former being faster than the pre-treaty battlecruisers still prowling the seas) costs about 2,200 funds per month, but our 10″ guns are still -1 quality. That makes them quite a bit less attractive. Should we forge ahead with heavy cruisers anyway, wait for research, or ignore the type altogether?

I plan on upgrading our battleships to oil fuel one or two at a time when oil becomes generally available, which will save on machinery weight and allow me to increase their speed (or, alternately, add anti-aircraft guns when we figured that out). 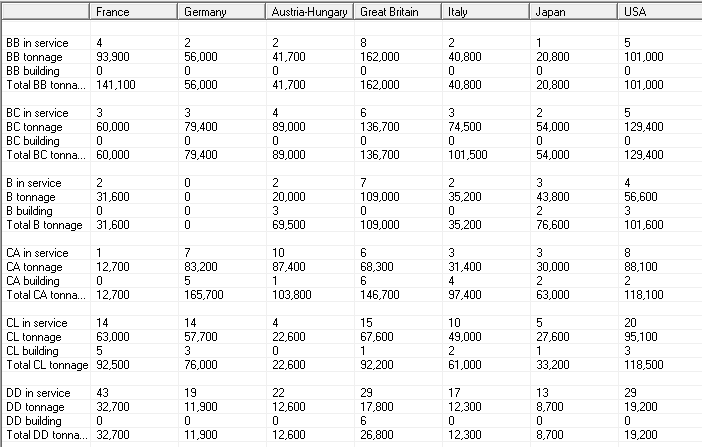 One unexpected outcome of the naval treaty is that we’re comfortably third in dreadnought ships behind England and the US, and will be for some time to come. The timing worked out very well for us. 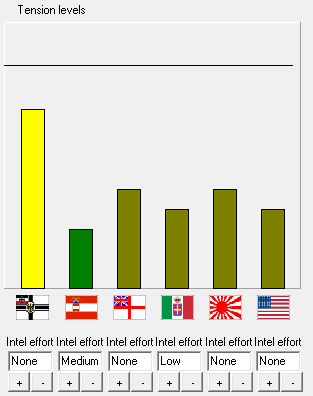 Tensions have been creeping higher with Germany again, which is both good (our battle line is better than theirs because the treaty halted their building program too) and bad (we don’t have England to help out this time).

Austria-Hungary remains resolutely immune to my many and varied provocations.

Progress has been limited on locating a new ally.

As I mentioned, we’re spending money on gunnery training for the first time, and our naval aircraft budget line item is slowly beginning to grow.

Our prestige remains at an all-time high. I elected to skip dock expansions for the time being, given that we can’t use them.

It’s likely I’m going to miss next week—this weekend is a very busy one, and I don’t know if I’m going to have the time to get in two years of gameplay in the middle of it all.