Back in the Saddle

After the long retreat from the Clans and the hard fighting which occurred along it, things seem positively sleepy in the Opinionated Bastards’ mobile headquarters.

In mid-August, though, our somber ComStar liaison stops by, informs us gravely that we have a mission, and leaves as quickly as he came.

The rebels are fleeing a ComStar sweep, moving through a seaside town, where we’ll intercept them. Gale-force winds are blowing in from the shore, which forces the rebel vehicles to withdraw before combat.

There are four enemy medium mechs on the field: a pair of Vulcans, an Assassin, and a Phoenix Hawk. It’s a successful mission if we knock out two of them.

The Bastards deploy near the center of the map. The rebels deploy to the south; they’re fleing to the north.

The hurricane winds are going to make it difficult to score many ranged weapon hits, at least while everyone is moving. Linebuster and newcomer Blinky are the only ones with a chance at a hit. 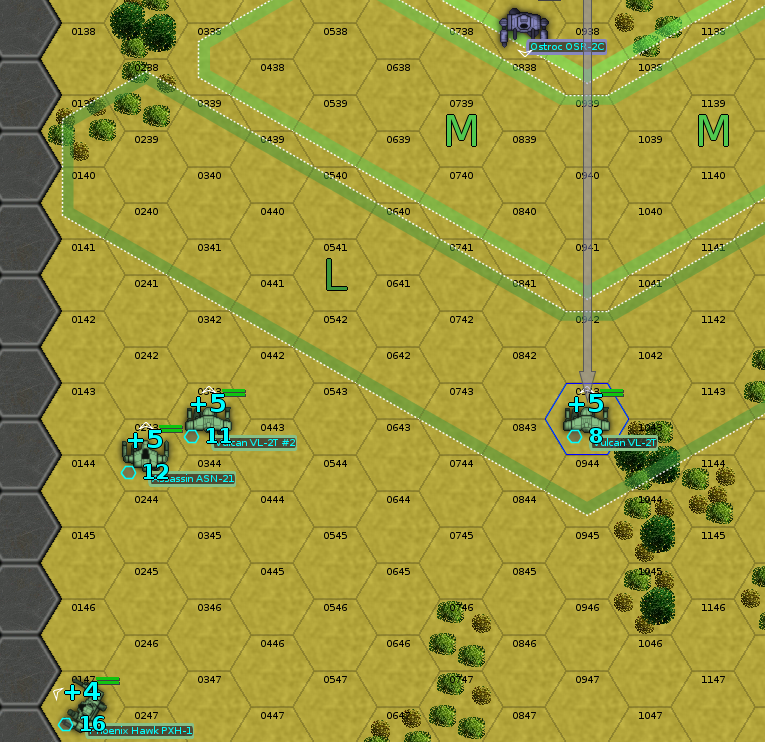 The wind is playing havoc with targeting systems; gusts hammer against mech arms, throwing off their aim. Woad and Blinky get into punching range, where they’ll hopefully be able to do some damage without having to rely on ranged weapons. 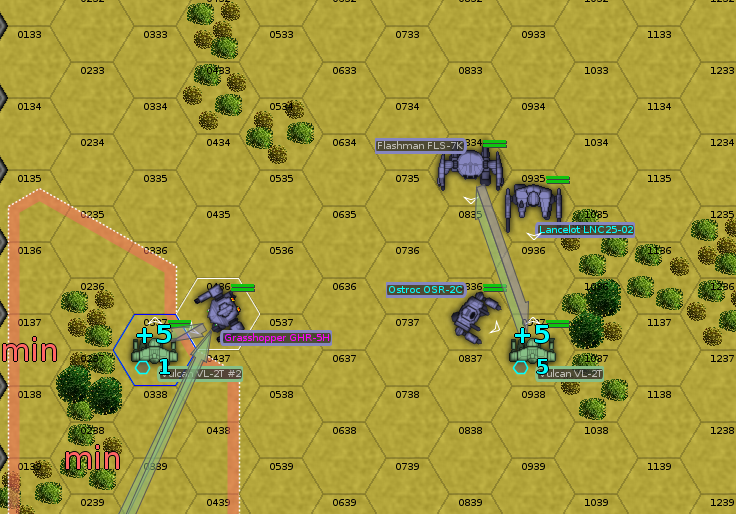 Ranged weapons fire doesn’t accomplish very much. Woad and Blinky exchange kicks with the enemy: everyone hits, but because of the high winds, everyone falls over, too.

Rather than attempt to stand, both of the rebel Vulcan pilots eject. They fail to stick the landing. Both end up unconscious.

The enemy Assassin manages to take enough fire to lose its footing. Its pilot ejects, too. 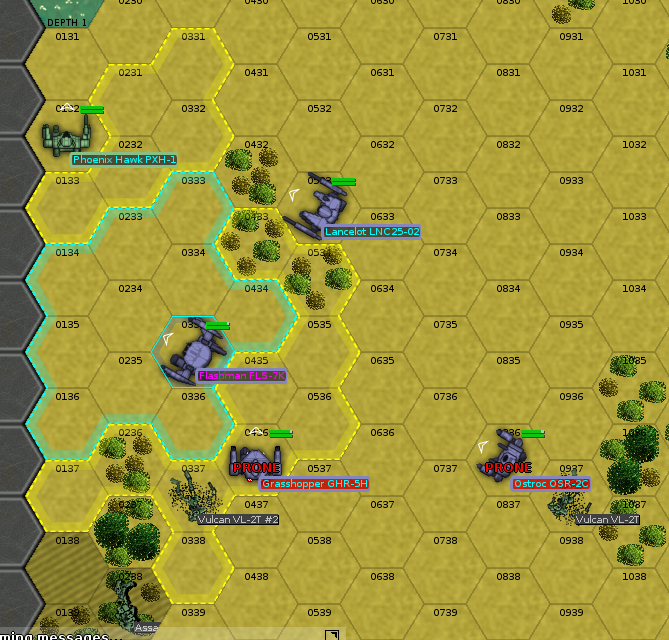 The Phoenix Hawk is now most likely beyond our reach. He can simply run away.

I spoke too soon, though. Bafflingly, he turns to fight. We’ll get one more crack at him. 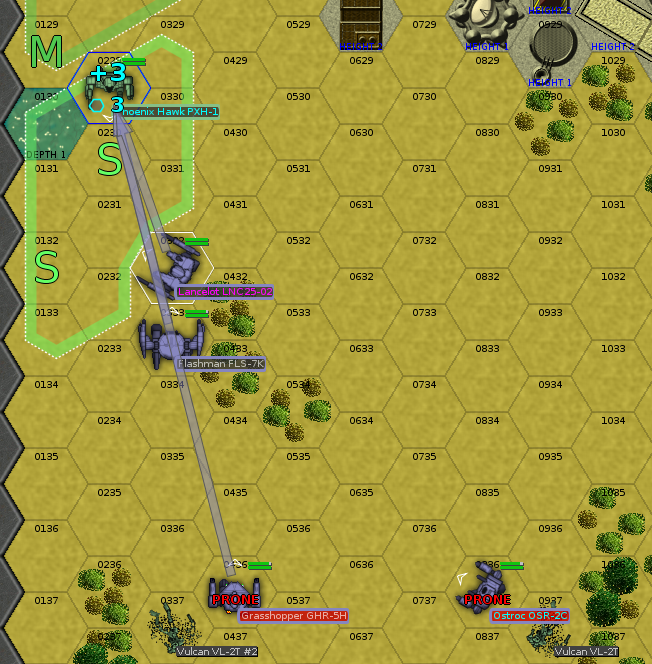 The Ostroc suits Blinky just fine. Even in terrible conditions, he has at least some chance to hit. 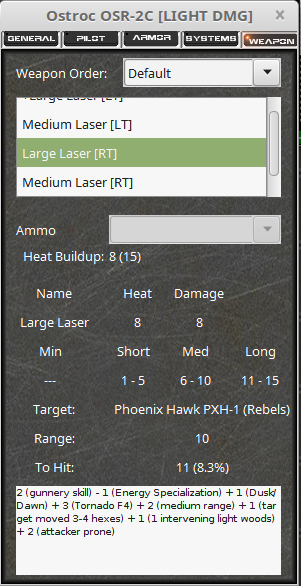 The Phoenix Hawk pushes a bit further away, but now he’s up against a little river. He probably will need some extra time to get through. I can’t imagine jumping is a very good idea right now. 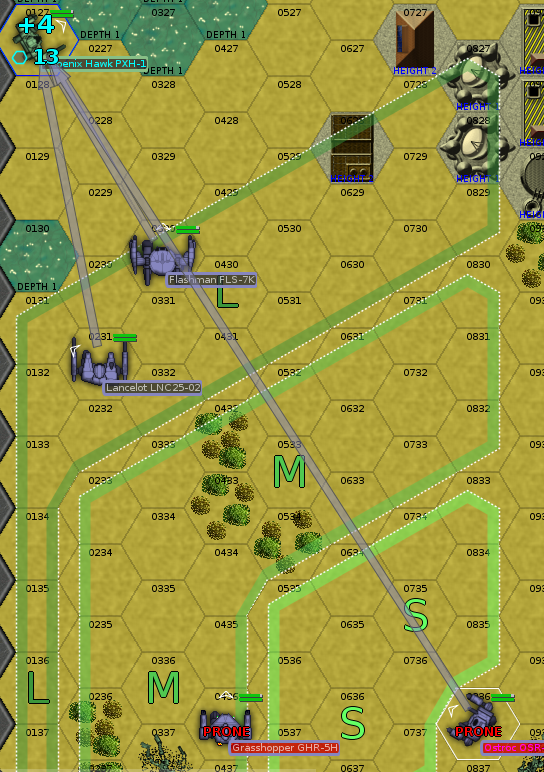 Bear’s Bruisers arrive on the field, with Wojtek in tow (his first combat deployment in a long time).

Unfortunately, it proves to be a bit of an anticlimax. The Phoenix Hawk steps into the water, trips, and falls, and the pilot immediately ejects. 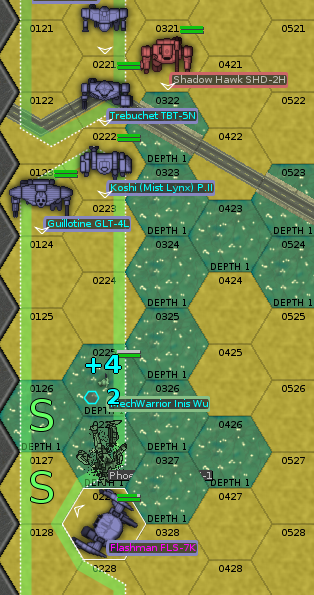 Woad and Blinky both have minor injuries from falling over, and their mechs have light damage.

After the storm passes, we recover the enemy Phoenix Hawk and the enemy Vulcan, both of which are in serviceable shape. We’ll probably strip the Vulcan (a VL-2T model) and keep the Phoenix Hawk, at least for now. The latter chassis is handy to have; a good weight to fill in around the edges of a heavy lance.

One of the rebels, after ejecting, managed to shelter in the wind shadow of one of our fallen mechs. ComStar takes her off our hands as soon as the weather permits.

I’ll say this: we didn’t exactly cover ourselves in glory this time. Although four enemy mechs were destroyed on the last mission, we scored precisely zero kills.

Rebel morale remains high. Given the much less threatening opposition, I’m trying to rotate in some of the under-utilized pilots. Wojtek was on the board this time; hopefully we can get Euchre in next time.

The following mechs are available on the unit market. All of our pilots currently have mechs, however.

Both of the techs who are working on the refits flubbed their finish-on-time rolls. As of now, it’s another five months for the Awesome and another month for the Stalker.

Drake has been getting well-acquainted with his desk; it looks like he’ll be playing administrator for a little while longer. (I’ve given him two points of the Administration skill as a bit of a consolation.)