The ComStar liaison is an odd, somber fellow, who assigned us a sector to patrol, wished us well, and sent us on our way.

June passes without much action. We’re called out of our forward positions a few times, but when we arrive, the the rebels have already fallen back. On June 30th, however, an intriguing message arrives at headquarters. A rebel commander challenges us to a duel.

The Clanners in our employ enthusiastically favor the idea. Drake is a little more cautious. He eventually decides to accept, if only to bring the rebels to action and get a kill on the board.

Who should be our champion? Rook, our deadliest pilot by far, seems like the obvious answer. With her Stalker in the shop, she borrows the Flashman from Carcer and heads out. Wizard and Hanzoku accompany her, playing bodyguard in the event the rebels try to get cute.

Waiting for us at the designated place of battle is… a Banshee. The Banshee, a 95-ton assault design dating to the dawn of the Star League era, is widely mocked as ineffective. Its armament totals a PPC, an AC/5, and a small laser, a piddling armament for a mech of that size. Most of the tonnage goes to an enormous GM 380 engine, which makes the Banshee about as fast as the Flashman facing off against it. In other words, not very fast. 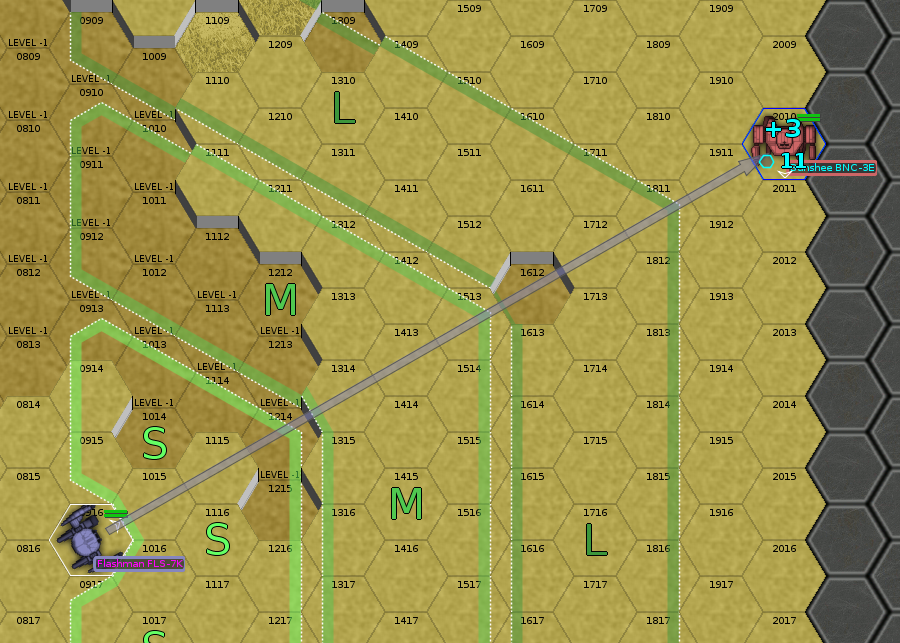 Closing in. Rook, still outside of medium laser range, lands hits with both of her large lasers, but takes a PPC hit in response. 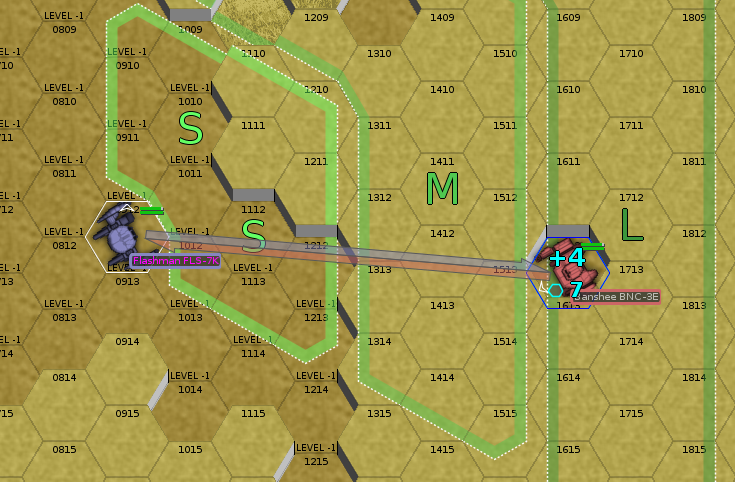 The Banshee closes in. Rook slows down, hitting again with a large laser and taking a hit from a PPC again. 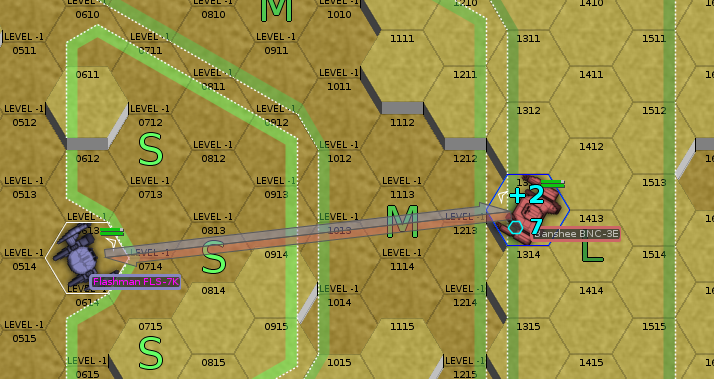 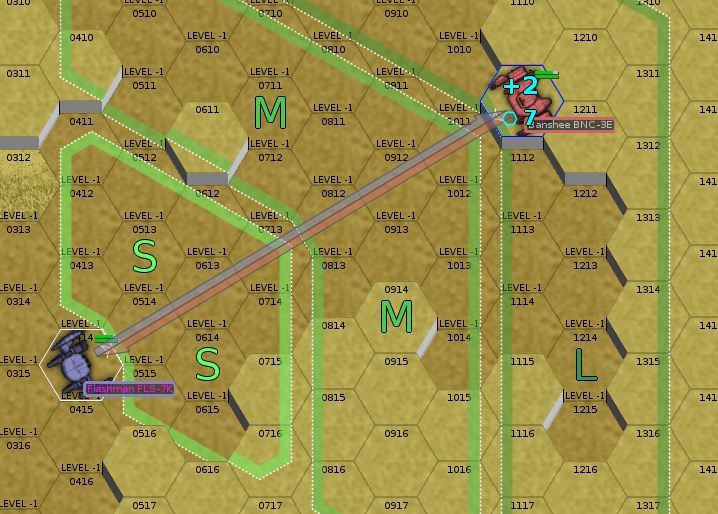 Sensing that the Banshee is trying to get around behind her, Rook backs up and lands more lasers on it.

She takes another hit to the center torso, and is nearly out of armor there; the Banshee’s been good at keeping its hits in the same place. 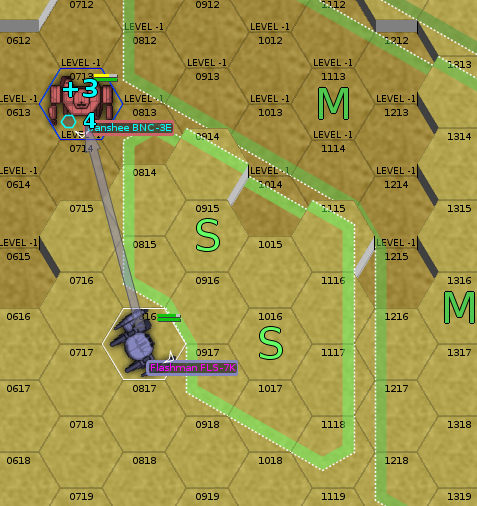 Though Rook is hammering the Banshee, it gets into a semi-flanking position; she can only return fire with one large laser. In return, she takes still another PPC to the center torso; it eats through the armor and damages her engine.

The alarms don’t faze her.

The Banshee steps back, into the optimal range of its weapons. It doesn’t matter. Rook calmly plugs it with one of her large lasers, and… 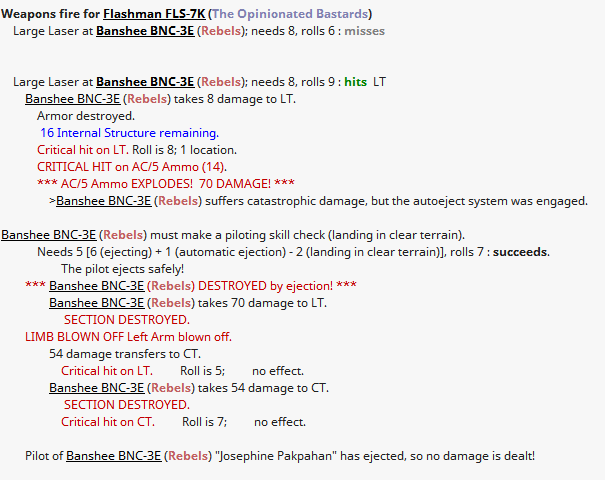 None of the above.

Despite Rook’s victory over the rebel leader, reports indicate that rebel morale is high.

A new face shows up at our camp, another Rasalhague citizen shows up looking to sign on. 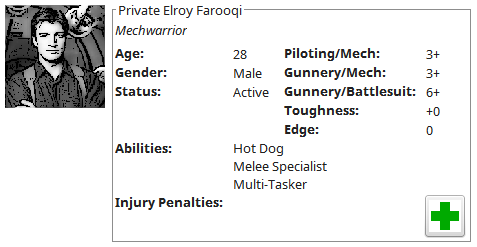 Newly-minted Private Elroy Farooqi was in the service of the Republic some time ago, but quit for reasons he refused to say, and spent some time as an independent operator in the coreward periphery. During the long retreat from the Clan invasions, he organized local militias and ad-hoc defenses; now, there’s no call for that, but he wants a piece of the fighting again.

Some heavy mech refits are also in the pipeline—switching Wizard‘s Guillotine over to the -4L model, or perhaps the Clan ER Large Laser+Double Heat Sink model, and adding double heat sinks to some of our other heat-limited mechs, like the Thunderbolt, Flashman, and new Ostroc. (Obviously, we don’t want to be exactly heat-neutral. Building up a little heat over the course of a few alpha strikes is healthy.)