I’ve spoken before about CAS-specialist aircraft. I’ve spent a lot of time with the virtual A-10 in DCS, and I’m a big fan of the aircraft. In my heart, I love that gun. But the heart can make us do stupid things. We can’t always trust it. Similarly, the A-10 has saved the bacon of a great many American soldiers in combat. They adore the Warthog, and rightfully so. But they would adore any aircraft that saved them.

We want to know whether or not the Dedicated CAS aircraft is a good buy. Keeping it simple, we’ll compare it to buying more multirole aircraft instead. In USAF terms, A-10s or F-16s. Given that this is 2017, and we have combat data on both, is it worth it to put money towards maintaining the A-10 fleet, or should that money be switched over to the F-16s and F-35s?

The close air support mission is a peculiar one, and one full of contradictory requirements. The A-10 seems tailor-made for the mission, with plenty of armor and a massively powerful gun. It’s optimized for flying low and slow, and this kind of flight profile maximizes the utility of the gun and the ability of the pilot to see things.

That sort of flight profile make a number of assumptions:

In a conventional shooting war, or even a low-intensity conflict with a sophisticated adversary, we don’t get to assume these are true.1 In a COIN conflict, we get (1) and (2) but we may not have (3). The enemy may have access to MANPADS like Stinger or Igla. As seen in the Soviet experience in Afghanistan, this forces aircraft to medium altitudes, i.e. out of the gun envelope.

Let’s look at the combat record. The A-10 has seen combat in Gulf War I as well as providing close air support as part of US military operations in Iraq and Afghanistan. The first Gulf War is as close as we get to seeing the A-10 in a conventional war. The A-10 was not sent in against the Iraqi SAM systems. But it did see plenty of use against troops of both the Iraqi Army as well as against those of the Republican Guard. The Republican Guard was better equipped and better disciplined than the conscript regular army. The Republican Guard did not have much in the way of MANPADS or other short-range SAM systems, but they fought back with guns. Many A-10s sustained combat damage, and two were lost on February 15, which caused A-10s to be tasked to other targets. While the A-10’s armor usually allowed it to make it back to base, the A-10’s lack of speed was identified as a deficiency that made it more vulnerable to gun hits.

The primary tank-killer for the A-10 in the Persian Gulf was the IR-guided Maverick, not the GAU-8/A. Of course, other aircraft can also carry these Mavericks, and these other aircraft also racked up a respectable tally of destroyed tanks with the AGM-65s. The A-10A had very little provision for precision-guided ordnance2, and so did not use laser guided bombs to “plink” tanks, unlike the F-111. Again it doesn’t take a purpose-built aircraft to carry precision ordnance, and these can be delivered from medium altitude, away from AAA and MANPADS.

Lots of aircraft have done CAS duty in Afghanistan, including of course, the A-10. Again, the big star weapon hasn’t been the gun. It’s the JDAM, which are GPS guided. Also using the JDAM to excellent close air support effect are the B-1B and the B-52H. And many others too, but I’m highlighting heavy bombers because they’re big, high-altitude behemoths that aren’t really “designed” with CAS in mind. But they can do it with modern weapons. As can F-16s, F-15Es, F/A-18C/Ds, F/A-18E/Fs, and just about every other multirole tactical aircraft you care to name. Tactical aircraft give up the giant gun and the armor plate. But there’s a net gain in survivability from more speed because they can evade missiles better, and they can perform the vast majority of modern CAS missions just as well as a purpose built type.

For COIN, one might be tempted to look for savings in aircraft types. These can be provided from UCAVs like the MQ-9 Reaper or from something like a Super Tucano. Both of these will provide more sorties per dollar than the sort of big armored CAS-optimized plane. And if there’s negligible threat, they’ll drop precision guided munitions just as well.

Against a hypothetical, sophisticated opponent with modern integrated air defense systems, all of the above will all require large strike packages to approach any kind of reasonable survivability level, and those aren’t feasible for CAS. Maximum survivability is provided by aircraft with low-observability characteristics, such as the F-35 or F-22. In Desert Storm, coalition air commanders had faith only in the stealthy F-117 to penetrate the formidable air defenses around Baghdad. The alternative to stealth is a big, Rolling Thunder-style strike package with ECM and SEAD escorts, plus fighter escorts. Which isn’t going to be generated for an aircraft to loiter in support of ground forces.

Let’s look at a more modern example: recent events in the Ukraine. Here’s a radar map of the Ukraine. 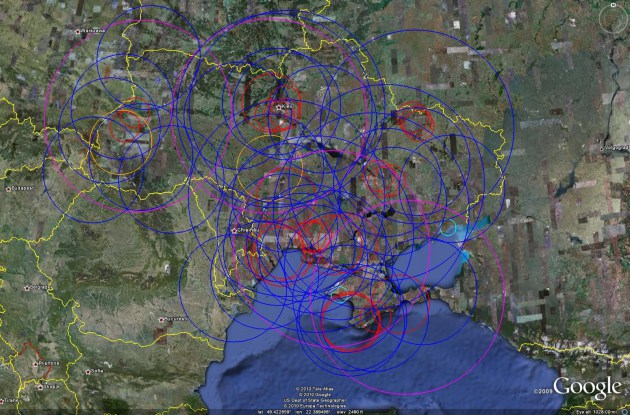 That’s a map of all of the air search radars in the region. Have fun with that. And remember, lots of these SAM systems are going to be reasonably modern units that can move. Everyone saw the success the Serbians had by shutting off their radars and moving their air defense systems around to frustrate NATO SEAD strikes. And you can’t sortie your A-10s until you get air superiority and deeply reduce that SAM umbrella.

The gun on the A-10 is a fantastic weapon, but it’s a trifle outmoded these days. If a gun and armor were the sine qua non of CAS, we’d sortie Hs 129 B-3s. With modern precision munitions, the role can be filled by multirole or low-observable-multirole types with no loss of effectiveness. And in hostile airspace where the opponent has some actual air defenses, the A-10 and its ilk are the least survivable types. A mess like the Donbass is begging for low-observability if you want to actually survive to deliver ordnance and live to strike again tomorrow.