In the Mech Lab

The Opinionated Bastards reach out to FedCom officials via hyperpulse message, and the deal is made. We can now buy advanced Inner Sphere technology; our mech techs place a large order of double heat sinks on the same day.

Since the Awesome is a large part of our combat strength, we’ll have to hold off on refitting it until we’re between contracts. By February 6th, however, we’re ready to start on Severe‘s new ride, the Koshi. Hanzoku demonstrates to the techs how the omni system works, and all agree the interchangeable pods are pretty nifty.

The problem is, we don’t have very many podded weapons: just a pair of Clan ER Medium Lasers. Those go on, of course, but that leaves quite a bit of space left over. (Since the Koshi is an omnimech, we can’t alter its armor configuration without totally redesigning the chassis.) The techs scratch their heads, then draw up plans to wire in three of the ER Small Lasers from Hanzoku‘s old mech in fixed mounts. They can’t be swapped as easily, but at present, we don’t have enough Clan salvage to make that a problem.

Kepano Endo, one of the company’s original techs, takes a look at the specifications, grunts, and gets his team to work. On February 9th, he announces it’s finished. Severe takes it out for a spin and pronounces it good.

And good it is, at least in large part. It moves 7 hexes while walking or 11 while running, and can jump 6 hexes. Its five lasers generate 24 heat, while it sinks 20 per turn. Its alpha strike at ranges up to 6 hexes is a highly respectable 29 damage, dropping to 14 damage at ranges out to 15. (That’s the same range as an Inner Sphere large laser.)

Unfortunately, it’s rather lightly armored. The arms in particular are pretty floppy, with only four points of armor and four points of internal structure. PPCs of any flavor will readily knock them off, as will Clan large lasers, lucky missile hits, and more. As such, the armament is placed in the slightly more durable side torsos. No important equipment is in the arms. This makes it a little harder to target enemies behind the mech, but also makes it less likely we’ll lose Clan equipment. At present, we don’t have enough of it to throw it away.

Nox is quiet through most of February. On the 22nd, a panicked Rasalhague intelligence officer lets us know that a large Clan force has jumped into the system. On the 25th, they reach Nox and make landings. By the 27th, the planetary capital has fallen and Clan forces are advancing on our sector. While the Rasalhague crews pack up the DropShips, the Opinionated Bastards are tasked with making a delaying attack on an overextended Clan force.

We’ve had about enough of being outgunned by Clanners, so we deploy Drake’s Destroyers and Second Lance against a short star of Clan heavies and a handful of reinforcing lights. Our Rasalhague ally is driving a Scorpion, a rare quadruped mech, armed with a PPC and an SRM-6 launcher.

The map is a minuscule section of hilly badland with next to no cover. It’s going to be bloody, but we’ve also caught this detachment off guard, so hopefully it’s not terribly bloody on our side. Knock on wood. 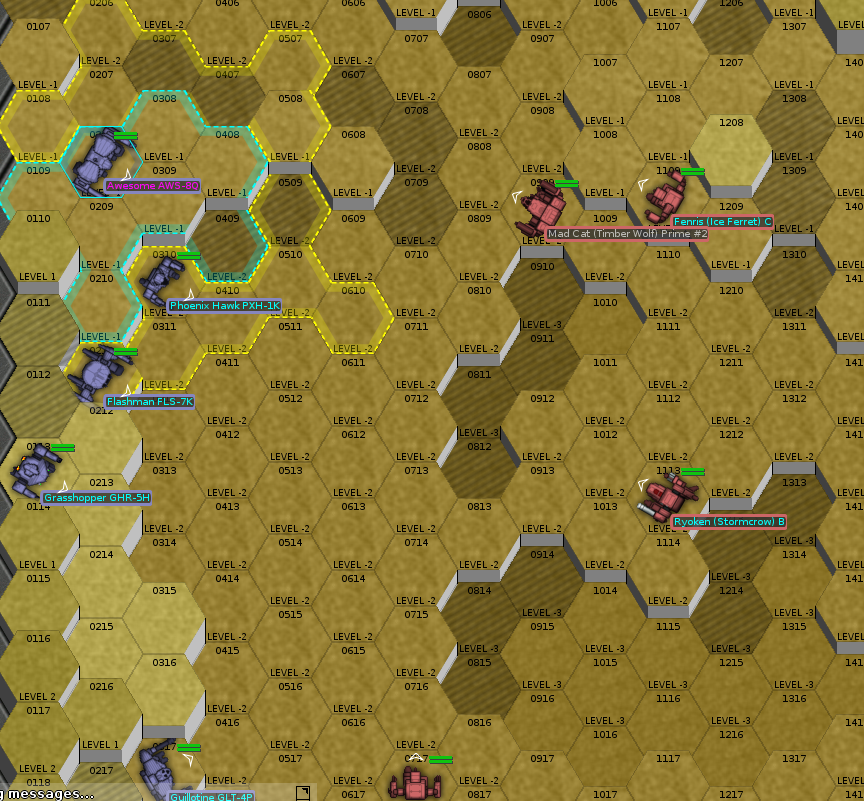 We come over the ridgeline on the west side of the map and find the Clan forces arrayed before us. Only four mechs are in evidence at present, the heavies; we stumbled onto them before we found their screening forces. The latter should arrive shortly.

Although the numbers are heavily in our favor owing to whatever minor losses the Clanners took elsewhere on the planet, intelligence suggests these Clan pilots are more skiled than those we’ve faced previously. We’ll see how that plays out.

In the north, Drake is the target of most of the Clan fire, but gives out a beating too. He hits the enemy Mad Cat in the head; with a Clan PPC, he would have knocked it out instantly. As is, he wounds the Clanner pilot.

Return fire from the Mad Cat and Ryoken, however, knock out his right torso, which dramatically reduces the effectiveness of his armament. His center torso armor falls under the onslaught of the Mad Cat’s LRM-20 launchers. The Awesome is alive, but on shaky ground.

The Clanners look at Drake‘s battered Awesome and seem to think it’s crippled enough to ignore for now. They probably aren’t wrong. 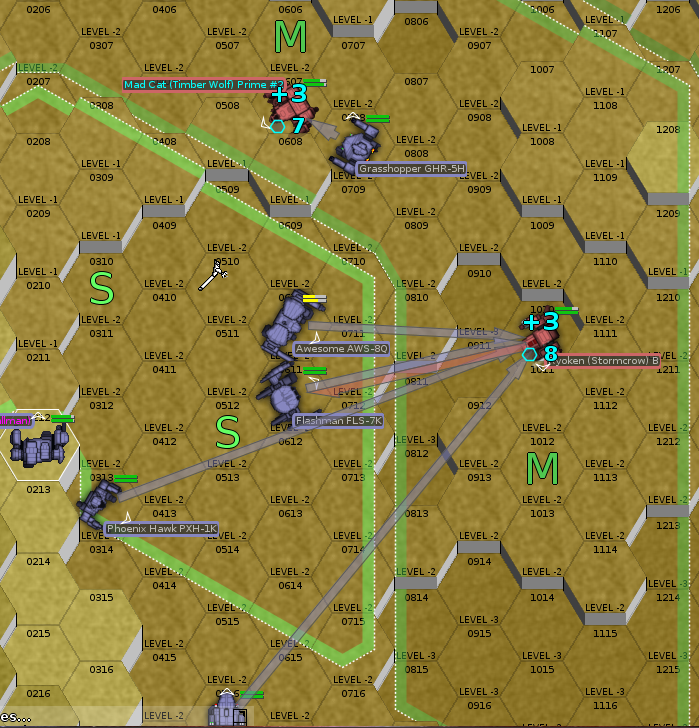 He calls out for focused fire on the Ryoken, and most of the lance complies. Woad, chasing the Mad Cat further north, decides to shoot at the target directly in front of him.

Woad‘s gamble pays off. His lasers cut into the Mad Cat’s left torso, striking its LRM ammunition and slicing off its left arm.

He attempts to kick the Clanner to add injury to injury, but doesn’t quite connect. Wizard, along with Milspec and our ally in the Scorpion, engage one of the enemy Fenrises and pierce its armor, but can’t quite bring it down.

I’m a little concerned for the Awesome, which is attracting fire from the Ryoken and the southern Fenris. 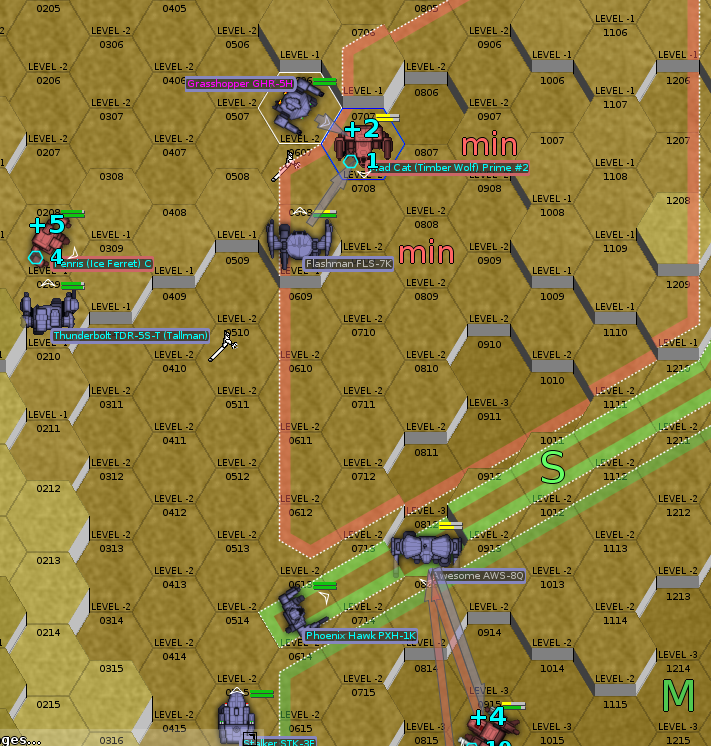 Rook in the Stalker has laid down some serious damage, but not quite finished anything off yet. I have high hopes she’ll manage to do so against the Mad Cat.

It’s a close-run thing, but unfortunately, Drake‘s Awesome goes down to center torso destruction. It’ll probably be salvageable, but will take some time and some doing to put back into service. At the very least, it’s down for the remainder of the contract.

As a consolation prize, Rook takes down the Mad Cat. Under heavy fire, both Fenrises fall down. Wizard stomps the southern one, crushing it.

The pilot of the enemy Ryoken ejects, for reasons not entirely clear to me. His mech was still in fighting shape, just shut down and fallen over. We may be able to salvage it, too. Although we’re already at our salvage limit, there isn’t going to be a Free Rasalhague Republic to complain for very much longer.

In a curious exercise in futility, the remaining enemy mech on the field, a Fenris, tries to stand up five times, failing the first four attempts. On the fifth try, he manages to stand… directly in front of Double Dog, who’ll compete with Carcer and Woad for the kill. Double Dog gets it.

We reset, arranging ourselves to meet the Clan reinforcements. Inner Sphere screening units might have retreated, but Clanners are cut from different cloth. The two lights will attempt to avenge their compatriots.

The enemy deploys at the northeast corner and southeast corner of the maps: a Koshi and a Puma, respectively. Perhaps we can score some spare parts for Severe‘s new ride.

The Koshi manages to find a spot where it’s very difficult for the northern force to hit it. In the south, however, the enemy Puma takes a solid thrashing. 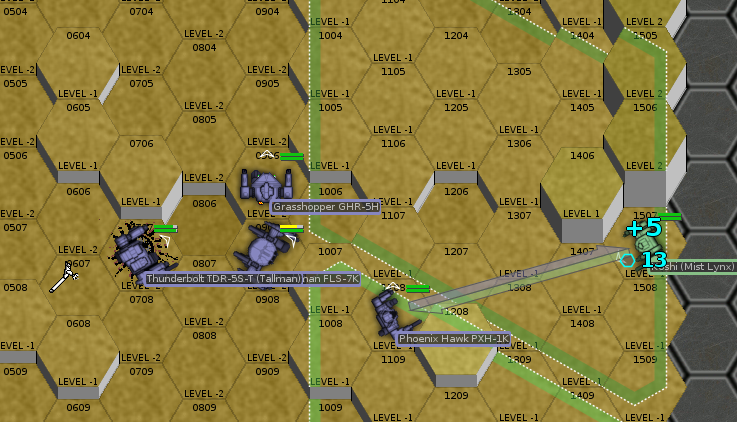 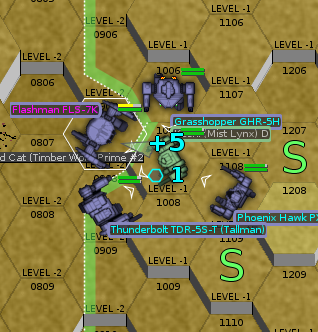 This time, the Koshi isn’t so lucky. The Puma, too, is facing down a ton of firepower.

Carcer‘s mech takes a hit to the head, knocking her out, but Woad retaliates by downing the Koshi. Wizard brings down the Puma, knocking out its engine with a shot to the left torso.

Salvage is good. Because its pilot ejected after it overheated, the Ryoken is simply sitting on the battlefield, crippled but able to move under its own power. Drake, extricating himself from the Awesome’s cockpit, calls Rook on his handheld radio and has her bring in Hanzoku, who simply starts the Ryoken and marches it off the field. 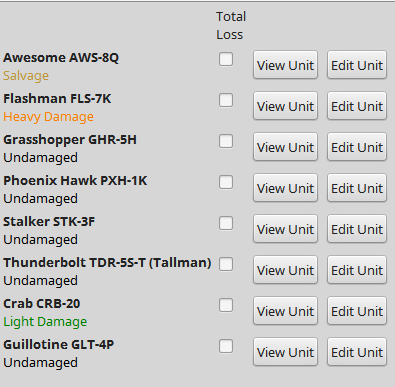 Contrary to reports, the Awesome is down, but not out. The Rasalhague officers, watching reconnaissance reports warily, agree to loan us a few tanks to drag it back to the DropShip. As our techs cut into the shattered center torso, they find enough of the internal structure left there to make a rebuild a possibility, but it’s going to take a long time to get it back into full-on fighting trim. Drake is out a ride for now.

We receive about two and a half million C-Bills in battle loss compensation, most of it for the Awesome. Our Rasalhague liaison is sheepishly apologetic as he authorizes the payment.

After-battle review suggests Rook should be credited with the Ryoken, in addition to the Mad Cat. That breaks her kill drought, and puts her ahead of Drake again in mech kills.

Wizard has another good day, making ace on four Clan mech kills and one vehicle kill. She’s the current leader in Clan kills.

The Bastards pack up and burn away from another fallen world. In the command center of the Union dropship we’ve crammed into, Drake asks an officer where we’re headed next.

“A little nowhere world I doubt you’ve heard of,” the officer says. “Tukayyid.”

Once we land on Tukayyid, the Rasalhague Republic will likely extend our contract by another two weeks to cover the travel time, which will push us into June. I can’t imagine they have much money left, though.

Nothing to report. The only mech available this month is a Blackjack BJ-1.

As mentioned above, the Koshi is in fighting shape right now. We will have to do a little more work on it, swapping out the Clan anti-missile systems for Inner Sphere versions of the same. We can’t get ammunition for the Clan system, so right now it’s just taking up weight.

Surprisingly, the techs have managed to get the Awesome into something approaching fighting shape. It’s standing on its own two legs, and looks approximately like it did prior to the last battle. The techs have also informed Drake that it’s just in cosmetic good shape right now; it could possibly be rushed into combat, but would be questionably functional.

In the next mech bay over, the newly-salvaged Ryoken looks to be in pretty good shape. That’s a little misleading, though. It’s missing a few at-present-irreplaceable Clan double heat sinks, and its right arm, where most of its ER Medium Lasers are mounted, is in dire shape beneath the armor, barely attached to the chassis. It’ll need to be replaced; when reattaching it, the techs discovered critical damage we won’t be able to repair. To replace it, we’ll have to take all the medium lasers out, as well as the armor, and I don’t want to have to deal with that yet.

One of the Clanners survives, clambering out of the wreckage of the Mad Cat. He’s quickly taken into custody by our pilots. We’re about to cut him loose—the Clanners don’t pay ransom, and keeping a bunch of prisoners on hand isn’t really in the cards—when Hanzoku asks to have a word.

After a conversation of surprising speed and length, Hanzoku explains that the Clanner, Simona, is now a bondsman in Rook‘s service—an indentured servant who must prove himself to possess loyalty, integrity, and combat skill to earn his freedom back.