The Rasalhague JumpShip leaves us on Nox, a pleasantly temperate world with some defensive forces still in place. It’s one world back from the front, at least for now.

Intelligence and preparation are classic Inner Sphere advantages over the Clans. This time around, the Rasalhague reconnaissance and intelligence forces give us a week’s worth of advance notice of Clan light forces arriving in our sector.

WIth time to set up, Drake and Teddy Bear hit on a plan: hide Drake’s Destroyers nearby, and dangle the Bruisers out front as bait. It ends up being a little more complicated than that—the projected course for the Clan force takes them through a badlands with next to no cover—but after disguising the Destroyers’ mechs as small hillocks, we settle in to wait.

Sure enough, the Clanners show up a few days later, tripping some remote sensors we’ve placed a few kilometers ahead. A few minutes pass, Drake wakes up his pilots and has them wake up their mechs, and before you know it, we’ve managed to bring twice the Clanners’ tonnage to the field.

The battlefield is open badlands, with no cover to speak of and very little relief to the terrain. This will benefit the Clans at first, whose weapons have absurd reach, but will swing around to helping us as we close in.

We march from our deployment zone southward, taking desultory fire from a pair of ER PPCs and an ER Large Laser. Hanzoku, unluckily, takes a PPC to his arm.

Carcer in the Flashman takes a few hits, but her armor is holding. Once again, we’re mostly out of weapons range. Next round should be better.

Drake is still out of range, but will be able to bring the Clanners under fire next round. Most everyone else can hit the enemy Ryoken, the heaviest unit on the field. (The Pumas, however, with their twin ER PPCs, are probably more dangerous.)

Hanzoku scores the Bastards’ first hit; unfortunately, Severe and her Locust take a hammering and fall down. Hopefully they’ll leave her be. 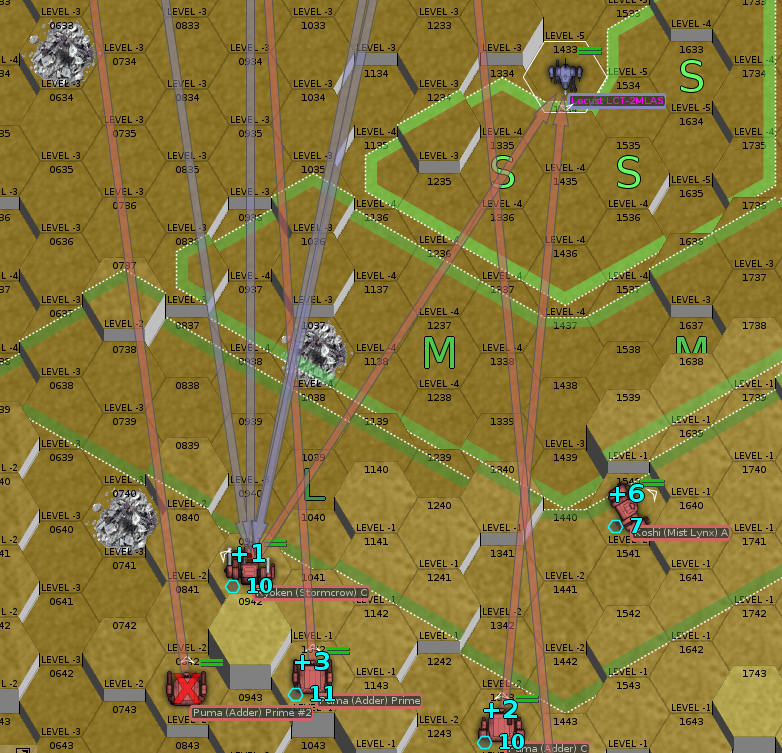 The green line is the extent of Drake‘s PPC range.

The Clanner scum squeak just outside of Drake‘s range. Happily, Severe manages to stand, so she’ll have a shot at running away if she doesn’t take too much more damage.

The Bastards’ shockingly poor gunnery continues, and Severe‘s Locust, alas, falls. She ejects, landing well away from the battlefield.

Most of the Clanners continue to juke just beyond Drake‘s range; they rightly consider him the biggest threat on the field. The Ryoken, however, stays within his reach. He lines up and thumbs the triggers, along with nearly everyone else.

In the meantime, the reast of our mechs are getting closer, where the superior Clan technology doesn’t tell nearly as much. (An Inner Sphere mech fist punches just as hard as a Clan fist.)

While most everyone focuses on the Ryoken, Hanzoku and Teddy square off against the nearest Koshi, a Clan 25-tonner. 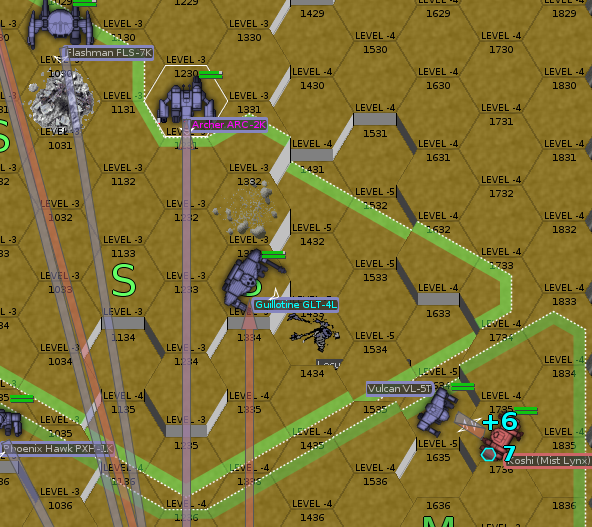 The enemy Ryoken falls on its side after taking two hits from Drake‘s PPCs, and some miscellaneous hits from other units. Hanzoku trades fire with the Koshi, and flubs a piloting check after taking a number of hits. He falls, and his large laser is out of commission.

Woad leads a pair of Phoenix Hawks (one of them is Private Hernandez, one is our liaison) toward the Clan flank. Embarrassingly, Carcer slips as she enters the rubble pile pictured. (Needed: 3 or better. Rolled: 2. On 2d6.) Hanzoku, too, fails an easy piloting roll, and slips as he’s standing up.

The enemy Koshi closes in, taking another crack at Hanzoku. Teddy is there, hopefully to kick it in the back. 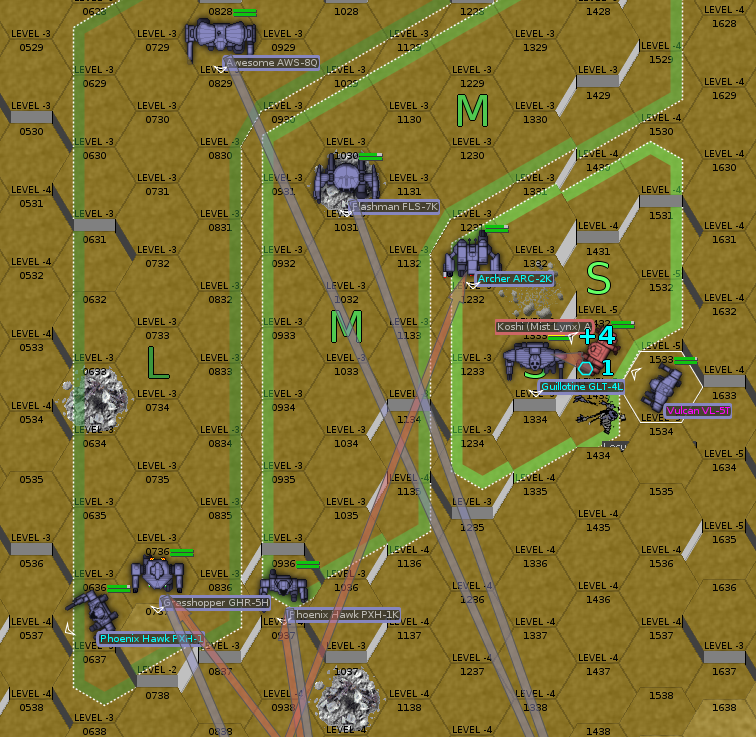 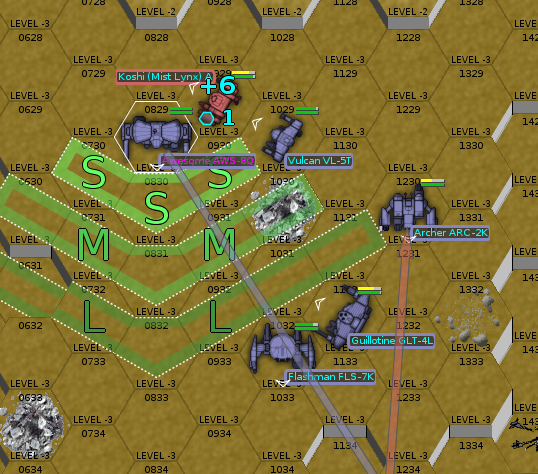 Drake looks to finish the job, firing another three-PPC barrage at the Ryoken. The Koshi comes up on his flank; Teddy and Hanzoku will angle to keep him safe.

Pepper in the Archer is looking a little unsteady; there are a few enemies pointing weapons at him. He may have to fall back.

Drake does indeed finish the job on the Ryoken, with an assist from Carcer and her pair of large lasers. During the physical attack phase, he brings his Awesome’s battle fist around in a sweeping arc, slamming into the Koshi’s cockpit. Somehow, its armor holds, but it’s looking decidedly worse for the wear. 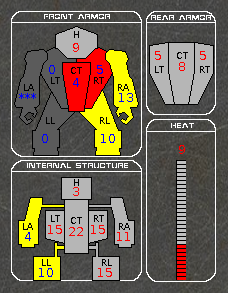 Alarms go off in Pepper‘s cockpit, as his Archer takes internal damage. He throttles his mech up to a run, hoping to throw off the Clanners’ aim.

Much of the rest of the lance focuses on one of the Puma Primes, whose aforementioned PPCs are causing us no end of trouble. Behind Drake, the dogged Koshi moves into position for another attack with its machine guns and flamer. Hanzoku and Teddy are there, ready with both weapons and their mechs themselves.

Drake‘s PPCs hammer one of the damaged Pumas, shredding its torso armor. Carcer follows up with a shot into the structure, punching through its core and knocking it down.

Pepper takes a few more hits, one of which knocks out an LRM-15 and comes perilously close to his ammo storage. He turns around, presenting his rear torso armor to the enemy, which is in much better shape than his front. He’ll try to get to safety behind what little terrain there is.

Hanzoku and Teddy are out of the fight for the moment, but thanks to their jump jets, they can hopscotch their way south and back into the thick of things.

Bear’s Bruisers have had the worst of it this go round, down two mechs—Severe‘s dead Locust, and Pepper‘s heavily damaged Archer. As such, the only forces in the south are our liaison in the Phoenix Hawk, Hernandez in the all-energy Phoenix Hawk, Woad in the Grasshopper, and Carcer in the Flashman. All are in pretty good shape, and the numbers will only go further in our favor. 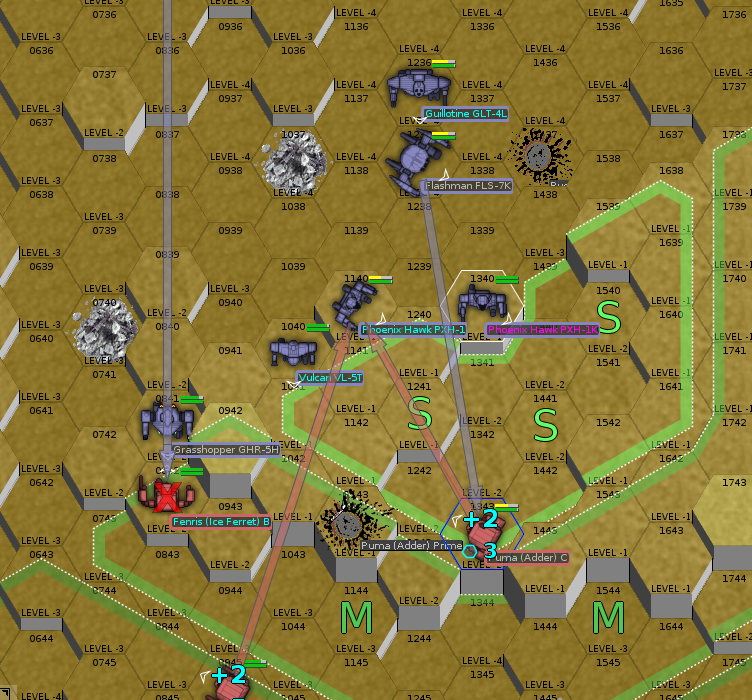 Woad boldly challenges the enemy Fenris face to face. Drake fires his PPC’s over the Grasshopper’s shoulder, hoping to support his lancemate. The rest of the Bastards will focus on the Puma-C nearest our forces.

Carcer once again scores solid hits on the enemy, slicing off the Puma-C’s arm with a large laser hit. The liaison Phoenix Hawk is looking a little unsteady, but stays on its feet.

Woad‘s challenge doesn’t really pay off; the Fenris hits him much harder than he hits it.

Jockeying for position, the Bastards surround the damaged Puma-C, while Woad continues to bravely face off aginst the Fenris.

Teddy shows the value of his refit Vulcan, hitting with the Puma with four medium lasers and notching the kill.

Woad‘s bravery continues to fail to pay off; he falls under sustained fire from the Fenris.

Woad runs for it; he’s taken some fairly heavy damage, and is notably low on head armor. The enemy Puma still has a shot at him, but Drake, in turn, has a shot at it, and a very good chance to hit with all three PPCs.

Woad takes hits from both the Fenris and the Puma, but lives to tell the tale, albeit with heavy damage and alarms blaring in his cockpit. Hanzoku scores on the Fenris by blowing up its engine, after Hernandez shot out its torso armor and heavily damaged its engine. 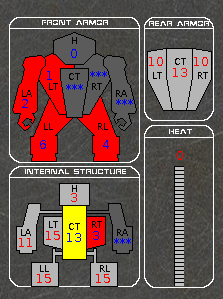 With only one Clan mech left, the battered Bastards line up and prepare to bring it down. Woad‘s Grasshopper, still clinging to life, survives a jump jet maneuver out of the Puma’s line of fire. Hernandez gets the kill to close out the mission.

After the battle, Hanzoku and Teddy flip for the right to claim the Koshi kill. Teddy wins. Privately, Hanzoku thinks it’s a lot more boring than a classic Clan trial by combat.

If anything, we’re more beat up this time than last time. Pepper‘s Archer and Woad‘s Grasshopper are both going to take some serious time in the repair bays.

Woad and Severe are both injured, but not badly. They pop over to the infirmary; hopefully they’ll be back in action quickly. 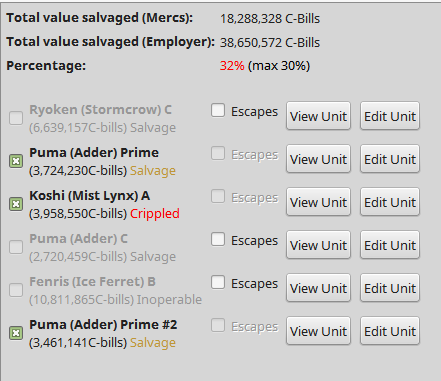 Observant Bastards will notice that I elected to salvage both Puma Primes. Happily, we neatly cored both of them, and each has a brace of Clan ER PPCs we can pick up, bringing our total to five. Refitting the Awesome as soon as we can finagle some double heat sinks from the Federated Commonwealth seems like the thing to do.

Most interestingly, as the Clans fight more and more battles in the Inner Sphere, there begin to be some Clan parts available. In particular, there are sufficient parts to bring the Koshi back online, provided we can successfully repair its engine. If we do, I propose to assign it to Severe, who is currently without a ride. (Since her Locust was her property, we either owe her a mech or a payout for the value of it.)

Teddy Bear leapfrogs several people on the board. Congratulations to Hernandez on his first kill.

Reports indicate that Clan Wolf’s morale is high, and understandably so.

The situation for the Free Rasalhague Republic, and for that matter the Inner Sphere entirely, remains dire. Our latest retreat takes us two world away from the Clan front, where we’re already facing enemy scouting forces. 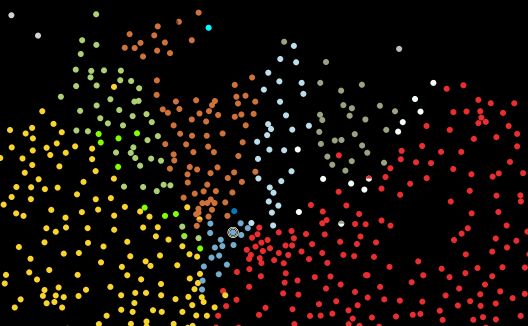 Not much in the way of mechs available: one Rifleman (large laser and AC/5 variant), one Dragon 1N (old-tech variant), and one Panther (a slow, 35-ton light mech mounting a single PPC and an SRM launcher).

We put feelers out to the Federated Commonwealth about access to better parts, along with a list of what we might be willing to part with. They responded with a potential deal; see Action Items.

We have 27.162 million C-bills on hand, although that number is dropping as we try to score more Clan parts on the crowded salvage market. 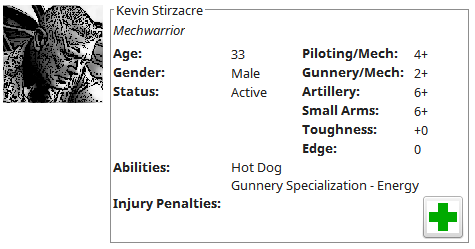 We welcome a new pilot to the ranks. Kevin Stirzacre is a veteran of the Rasalhague Royal Army, who hasn’t exactly been mustered out but has been stood down on account of there being very few mechs left in the Rasalhague forces. He saw that we returned from combat with the Clan forces with most of our mechs and all of our pilots, and thought that was a worthwhile thing to sign on to.

The Hot Dog ability decreases the difficulty on heat-related rolls (such as shutdowns or ammunition explosions). Gunnery Specialization – Energy means he rolls at a -1 bonus on all energy weapon attacks, and a +1 penalty on all other weapon attacks.

We un-mothball the Wasp we have in storage, put him in the cockpit, and attach him to Bear’s Bruisers for now, simply to keep our four-lance paper strength. Anything larger and the Bruisers aren’t a medium lance anymore. We’ll rejigger lances again soon. 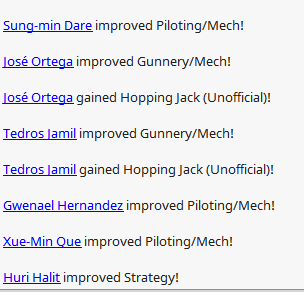 Milspec and Teddy Bear are now full-on veterans, both increasing their gunnery to 3+ and gaining the Hopping Jack trait (the penalty for using jump jets is only +2, not +3). Double Dog and Wizard both take a rank in piloting. Upon raising gunnery, they’ll move from Veteran to Elite status.

A week of crazy work got all of our Inner Sphere mechs back in action. Drake’s Destroyers and Second Lance are on patrol; the other two lances are resting and refitting.

The Koshi is proving trickier; all of our most experienced techs cluster around it most days, scratching their heads. Hanzoku watches with concealed amusement. When it’s back in shape, I think the thing to do will be to refit it somewhat—remove the machine guns, slap in the ER Medium Lasers we have from previous salvage.