I’ve mentioned before that the AR-15 is a really great design. It got a lot of things right. It’s very hard to compete with a design that has had 60-odd years to fix bugs and get improvements. And when it’s not an AR-15 design that’s winning, it’s often a derivative. The popular HK416 is just an AR-15 with a few improvements that HK likes. Let’s look at another improvement project, courtesy of Colt Canada.1 Unlike the HK416, which you can buy today, this is a notional project. 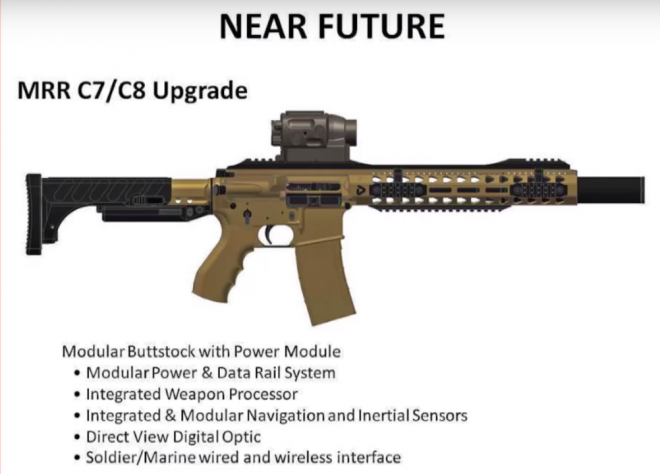 Colt Canada has had a license to manufacture and sell Colt AR-15s (and derivatives) for quite some time, and their C7 rifle is basically an M16A1E1, rather than an M16A1 or M16A2. The C8 is very similar to the M4. Colt Canada also uses excellent hammer-forged barrels, which they make in-house.

Our first major difference is the handguard integrated into the upper receiver. Colt Canada already makes these for their IUR and MRR product lines. An integrated handguard is simpler, more rigid, and may be lighter depending on the design. It does lock the user into one type of accessory attachment system and handguard configuration, however. It also means that the handguard has to be designed cleverly to allow access to the gas block and the barrel nut.

Next, we have an integrated suppressor built into the barrel. Very cool. This should save some weight and length over attaching one on the end of a barrel. It also requires careful design to allow the suppressor to be easily cleaned in the field. Colt Canada discussed the finer points of this rifle design with the USMC, who are big on suppressors. I’m stoked about that, because I’m also a huge fan.2

The last is the power-pack in the stock, combined with a powered accessory rail system. Centralizing the battery should be a net improvement in weight, plus it means there’s only one battery to worry about. On the other hand, it makes the rail more susceptible to the elements and a possible failure point. I’ve heard lots of stories of these projects, but I haven’t seen much actual field testing. We’ll see.