I love competition shooting, and I love modern military gear. Sometimes, the two worlds collide, and I always find such events fascinating. Let’s take a look at a little bit of Special Operations history, courtesy of an old Gunbroker auction and the late, great Weaponsman.

First, some competition background. In the USPSA Limited1 division, the dominant platform is the double-stack 1911, often called a 2011, which is the trade name used by STI for their pistols. Since STI is the biggest builder of these, and where to go for a factory-type solution, the name has stuck. While people use other guns in Limited, the 2011s are the most popular. Since it’s based on the 1911, with its expired patents, its wide open for people to play with, so you can get your gun customized to your heart’s content. While it’s the indian, not the arrow, that decides results, nobody wants to shoot a lame arrow. Plus the 1911-style, single-action, sliding trigger is super easy to make amazing. There are no better triggers than a tuned 1911-type trigger for shooting.

Around 2006-2007, one of America’s elite special operations units decided to experiment with these pistols. Here are a pair of them. 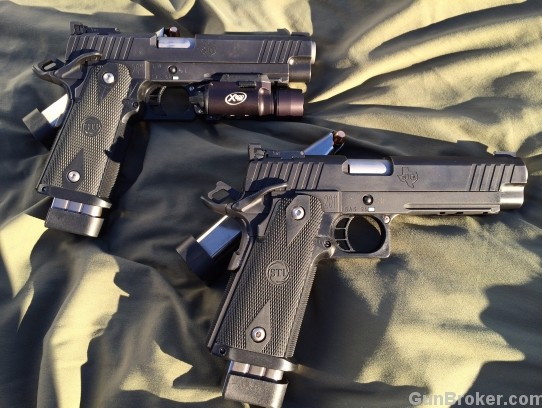 A few things to note. They’re chambered for .40 S&W, not 9mm NATO like you might expect. Being based on the 1911, which was originally designed around the .45 ACP cartridge, 2011s tend to be easier to make reliable with longer cartridges. .40 S&W is a bit longer than 9mm NATO, so that helps. Plus, the vast majority of 2011s are chambered in .40 for USPSA,2 that’s where most of the experience in keeping them running is focused.

From the auction description:

Both of these STI 2011 .40 caliber pistols saw actual issue and use in a US Army SOF unit in 2006-2007. One pistol is in 93%+ condition and the other is in 96%+ condition. They are consecutively serial numbered and are quite possibly the only consecutively numbered set to be offered for sale. This consecutively numbered set comes with the following items: *** individual letters of authenticity from Larry Vickers (www.vickerstactical.com) for each pistol— original, unedited versions will be provided to the buyer *** six 140mm 17 round magazines *** one 170mm 22 round magazine *** one issued Surefire X200A light *** issued Safariland 6005 light bearing holster with end user modifications *** two Eagle Industries pistol cases

These are standard STI magazines with STI follower and basepad. This doesn’t sound odd, but most competitors will swap the follower and basepad out to get more capacity. More capacity is great at a match, but it tends to make the mags a bit more fussy, and extra maintenance requirements are not the friend of the combat soldier.

What did SOF think of these pistols? They liked them, but found the maintenance requirements to be more than they wanted to deal with. Specifically, issues came up with fine desert sand from the Middle East. This makes some sense. These are tightly tuned competition pistols, built for maximum shootability. Competitors don’t mind having to do a bit more cleaning of their magazines. And of course, as a general rule, guns with a metal frame and slide need more lubrication than those with a polymer frame and steel slide.

That said, in Vickers’ letter of authenticity, he said that “these were the only pistols sold outside the unit” (emphasis added). So likely lots of the men chose to keep the pistols, because they are awesome and shoot really well. Even if they might not be the best choice for a secondary weapon out in the sandbox.