The Opinionated Bastards sign on the dotted line, and will be employed by the Federated Commonwealth hunting pirates until July 7, 3050 (or earlier, if we’re very successful). Read on below the fold for more.

To save on transit costs, I had the techs mothball the light lance. With only five mechs in mech bays, we fit into a smaller combat dropship; the mechs in mothballs go in a small cargo dropship. Mothballing takes two days, but a tech can unmothball a mech in a single working day, so we should be deployed as soon as we hit the ground on Gacrux.

Along the way, our human resources division makes a few paid recruitment rolls, spending 100,000 C-bills per week to load up on mech techs and administrators in the other categories. The Opinionated Bastards now have a fully-stocked tech division, as well as administrators and doctors fit for a unit of our size. In all, the Opinionated Bastards total 121 personnel, including the 72 local astechs and 12 local medics supporting our tech teams and medical staff.

Rick Papatamelis is one of our new administrators. Hi, Rick!

Finally, I ordered some parts for delivery at Gacrux: ammunition, armor, and heat sinks, all of which are consumables after a fashion. (Heat sinks don’t get used up, of course, but they’re the most common part in our force and therefore the most likely to take critical hits.) I also bought some hand and foot actuators before I realized that’s probably a good thing to vote on, so check the action items for more. 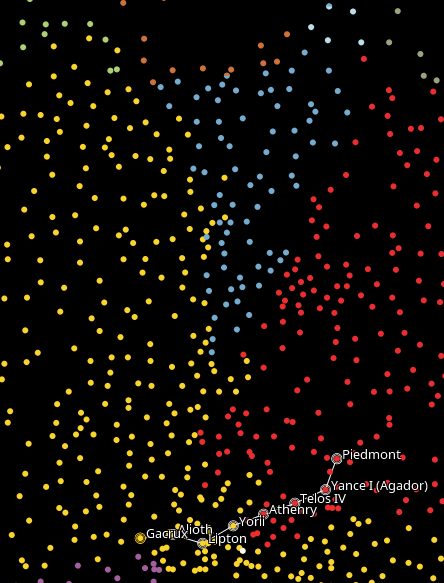 The seven-jump path from Piedmont to Gacrux. The top of the map, in blue, is the Clan invasion. Terra is the white dot just below Yorii.

Gacrux, our destination, is a fascinating place. We arrive on March 7, 3050. I deploy the heavy lance to seek out action right away to fulfill the terms of the contract, and set about unpacking the light lance. The latter, hosting all of our rookies, goes on training duty, in the hopes of bringing some of them up to a slightly higher standard of performance.

Nothing much goes on in March. The pirates won’t come out to play, which is quite a shame.

We do pick up a local; an astech by the name of Kian-zhi Ewerlof signs on permanently. He’ll apprentice under one of our proper techs for a while, and perhaps someday he’ll grow into a proper tech himself.

As mentioned above, we’re fully manned as far as administrators, techs, and support personnel go. Since we have administrators with an HR specialty, we can make paid recruitment rolls to find candidates for specific positions at a cost of 100,000 C-bills per weekly recruitment cycle. 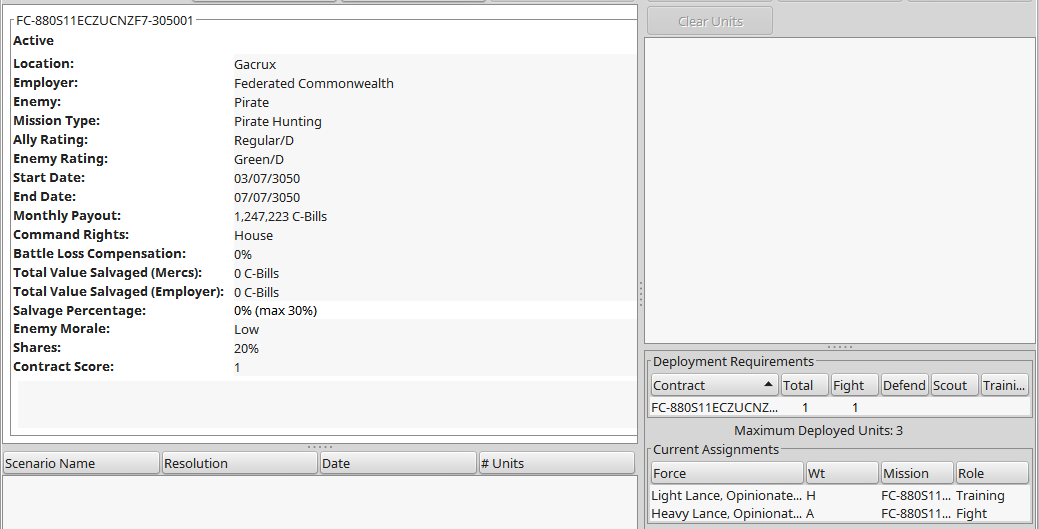 The heavy lance is searching out the enemy. The light lance (such as it is) is training. Enemy morale is now Low. If it reaches Rout, we win, and we can collect the remaining payment and hit the road.

The Locust LCT-1M is refitting to a variant which mounts three medium lasers, a solid punch for such a lightweight mech. 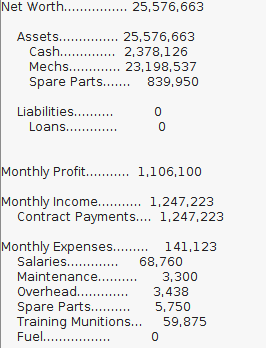 After transit to Gacrux and the first month’s payout, we have 2.378 million C-bills. Our net income before share payment is 1.106 million C-bills. After shares, the company nets 884,800 C-bills per month. The May, June, and July payouts remain, for a total of 2.654 million C-bills remaining to be paid. At the end of the contract, discounting salvage sales and battle damage repairs, we should have 5.032 million C-bills. Transit back to Piedmont should cost about 1.7 million C-bills. We should therefore have about 3.332 million C-bills after all is said and done for this contract.

Armor, ammo, heat sinks, and cheapo actuators make up the majority of our supplies right now. (Note that LRM ammo and SRM ammo are interchangeable. 240 shots of LRM 5 ammo is 720 missiles, or 60 shots of LRM 20 ammo.)