I rolled up the Opinionated Bastards a few nights ago.

This is an image-heavy post, so read on below the fold.

Per the vote, we’re a company of mercenary veterans operating in the Draconis Combine, not far from the Clan spearhead. Our home world is Piedmont, which has an interesting and slightly terrifying history.

They’re pretty fantastic. The dice were kind, and we have a fine set of pilots to kick things off with. 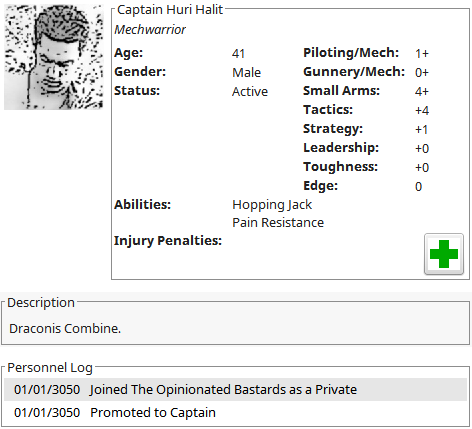 Huri Halit is the commander of the Opinionated Bastards, hailing from the Draconis Combine. He is the most talented mech pilot I’ve seen in my days playing BattleTech via MekHQ. In the ‘abilities’ section, he has Hopping Jack (+2 instead of +3 penalty for shooting after using jumpjets) and Pain Resistance (-1 bonus to all remain-conscious rolls, never takes more than 1 damage from ammunition explosions). 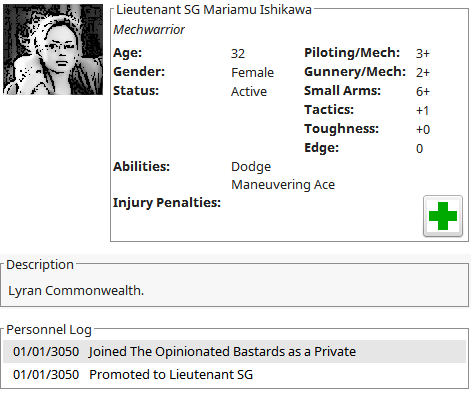 She’s not half bad, either. Hailing from the Lyran Commonwealth, she has excellent piloting and gunnery skills. Her Dodge ability allows her to use the Dodge action against physical attacks, which adds a +2 penalty to physical attack rolls against her mech. Maneuvering Ace allows her to sidestep. 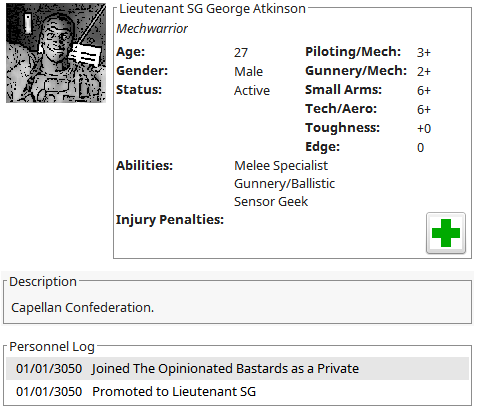 His abilities push him from superb to whatever’s beyond superb. Melee Specialist means his melee attacks have a -1 to-hit bonus and do 1 extra point of damage. Gunnery/Ballistic adds a -1 bonus to hit with all ballistic weapons. I think Sensor Geek only comes into play when playing with fog of war on, which we aren’t. 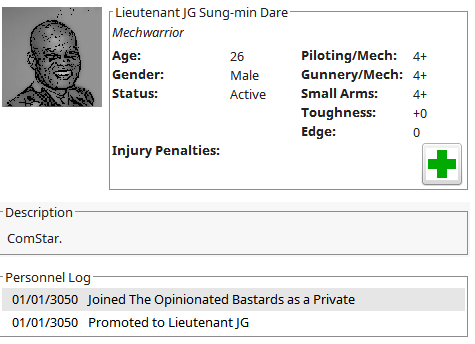 A workmanlike pilot and gunner, he’s most interesting for his background: he is one of two of the Opinionated Bastards who comes from ComStar. As such, he brings a high-tech mech to the unit, a Rifleman RFL-3N. That also means that he can’t be reassigned, and if he dies or retires, the mech goes with him. 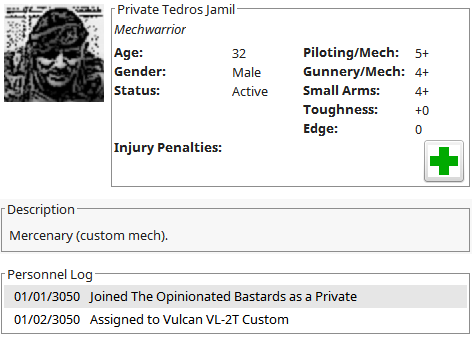 Another workmanlike pilot and gunner. A mercenary with no known home state, he brought a custom mech with him, a Vulcan VL-2T with the flamer replaced by a second medium laser. Same deal as Lieutenant Dare: if he dies or retires, the mech goes too. 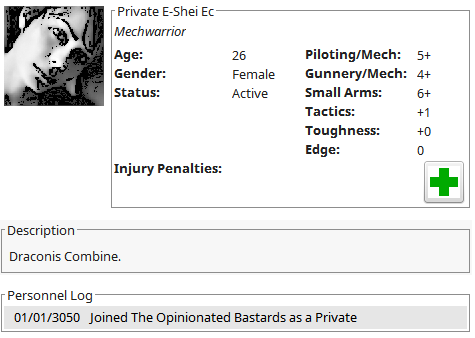 The oddly-named E-Shei Ec is another former resident of the Draconis Combine. 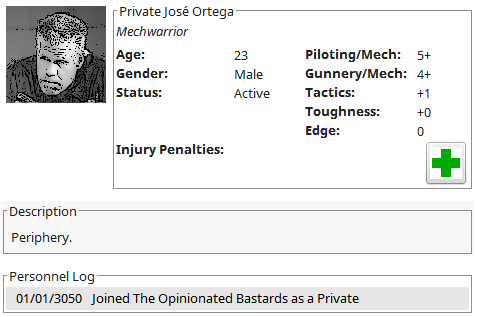 Jose Ortega comes from the Periphery, specifically the Rim Collection, a small, independent coalition of worlds to the galactic west of the Inner Sphere. 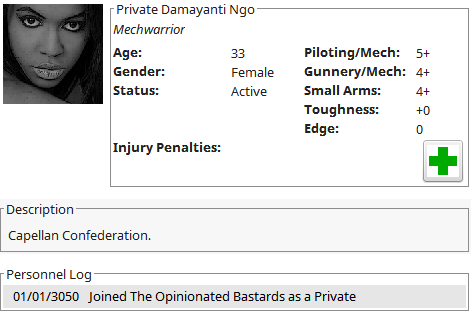 Private Ngo is another Capellan and another average mech pilot. 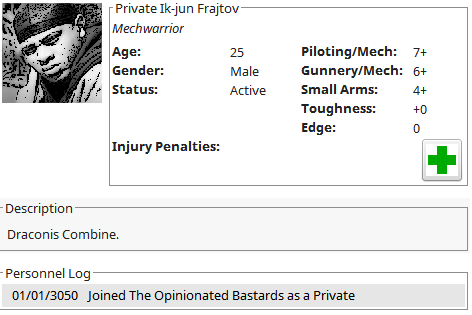 Private Frajtov is the first of our truly green pilots; piloting and gunnery skills 6+/6+ and above mark a novice. He’s another resident of the Draconis Combine. 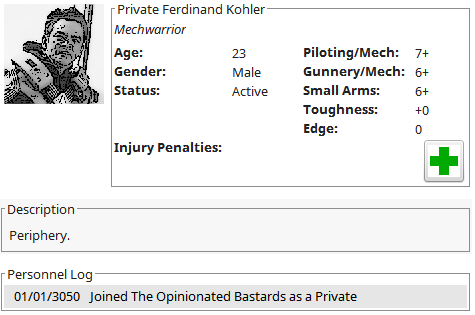 Private Kohler is another rookie and another Periphery man, although he hails from the Lothian League, a long-lived periphery state adjacent to the Marian Hegemony. 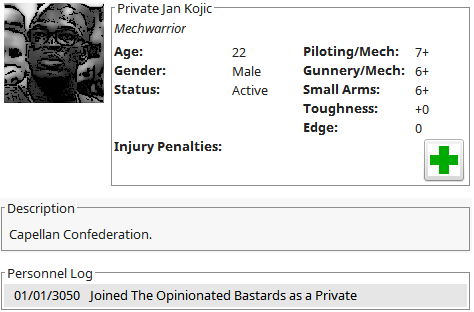 A rookie and a Capellan. 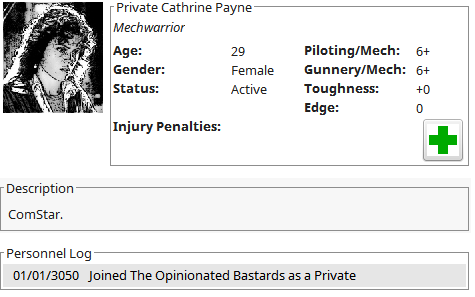 Another ComStar veteran, Private Payne is a little less hopeless than our other rookies based on her history with that august organization. She brought along a Locust LCT-1M, with the same caveat as our other ComStar pilot.

The dice were still my friend here. Confession time: I forgot to change the faction for each pilot’s background. I only remembered when I got to the ComStar pilots. So, I made nine rolls on the Draconis Combine random unit table and two on the ComStar table. (One of the Against the Bot mech generation rolls failed altogether, so we have 11 mechs and 12 pilots.) 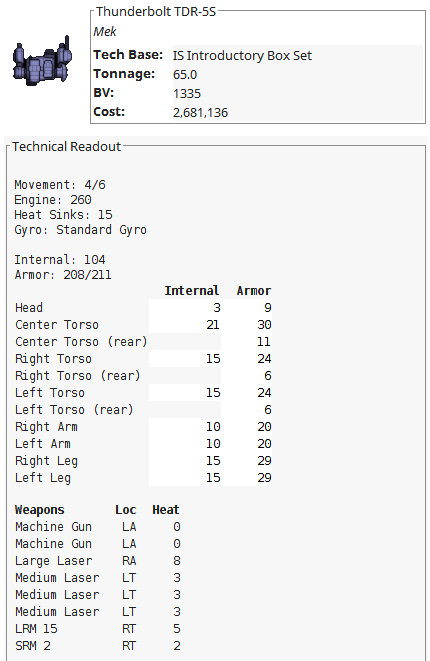 An energy-heavy heavy mech. The missiles are a bonus, and the large laser is always nice to reach out and touch the enemy. It may have issues closing with foes—it isn’t all that fast, and it doesn’t have much long-ranged weaponry beyond the LRM and large laser. If it can bring all its armaments to bear, it’ll melt things pretty quick. 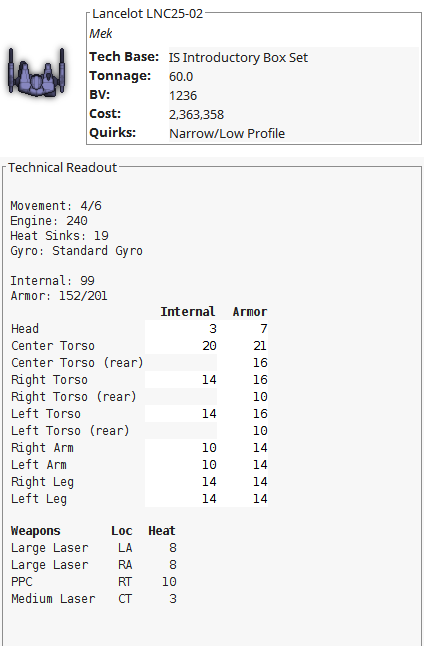 That’s right, we have two of them. The Lancelot is even more energy-focused than the Thunderbolt. The PPC is a wonderful long-range weapon which is no less heat efficient than a large laser. The large lasers provide a workable punch at close range where the PPC’s damage falls off. 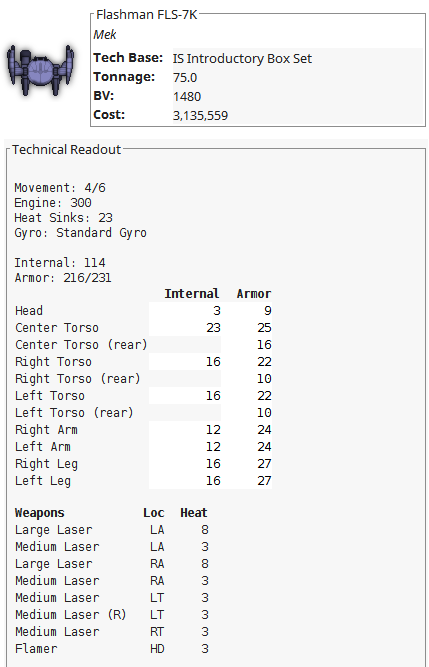 The Flashman is our heaviest heavy mech by tonnage. Again, it has an overwhelming focus on energy weapons. Unlike the other mechs, it has the heat dissipation capacity to fire almost all of them almost every round. 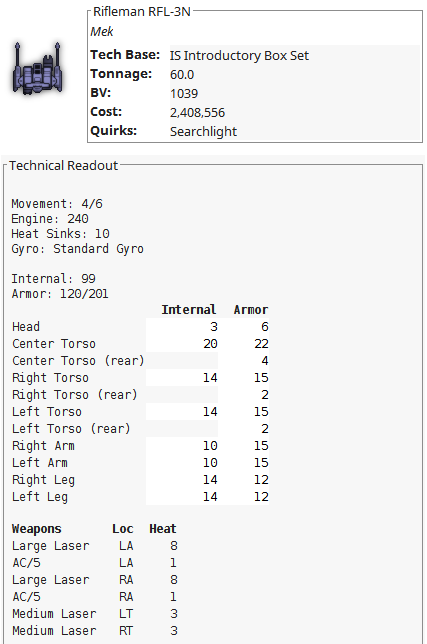 A heavy mech with a balanced loadout. The twin AC/5s provide a heat-efficient punch, at the cost of ammo explosion risk. Owing to its limited number of heat sinks, the lasers are nice to have but not really main weapon material. 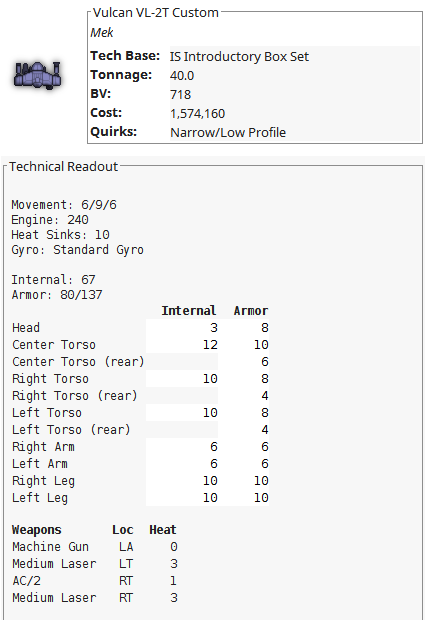 A medium mech mounting a machine gun and AC/2, as well as a pair of medium lasers. (One medium laser used to be a flamer; that’s the custom part.) Has jump jets and decent mobility, but also lacks in survivability. 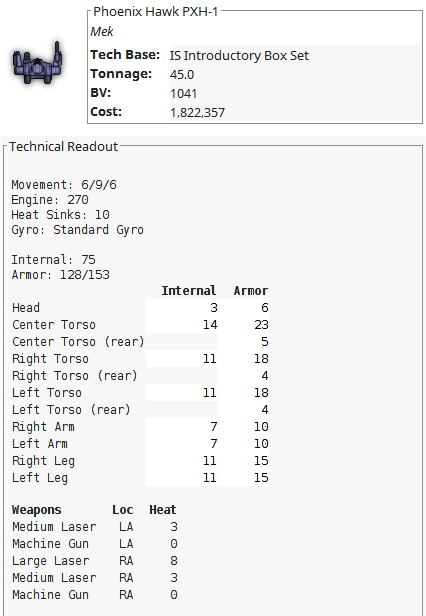 A medium mech with excellent armor, armament, and (for its armor and armament), mobility. One of my favorite middleweight mechs for its combination of desirable characteristics. 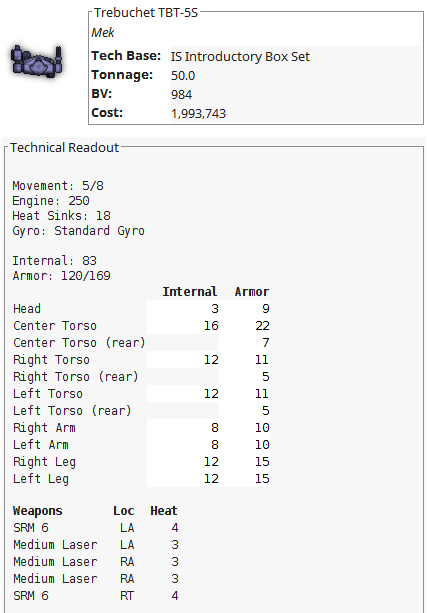 The close combat variant of the middleweight Trebuchet chassis. Fairly slow, but decently protected and possessed of a powerful alpha strike, thanks to the pair of SRM-6s, and superb heat characteristics. 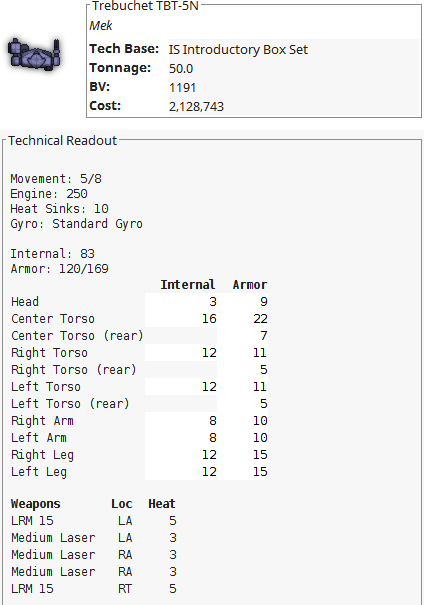 The long-range variant of the Trebuchet chassis. Just as slow, with similar protection. In place of the twin SRM-6 packs, it mounts twin LRM-15s for a powerful long-range punch. It has fewer heat sinks, but that isn’t an issue in practice—the medium lasers are useful at close range, and the LRMs aren’t. 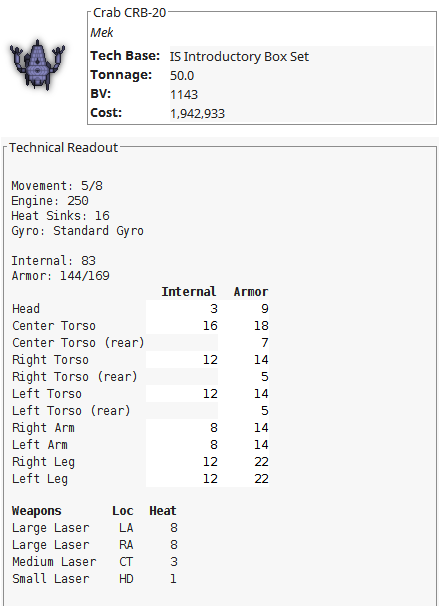 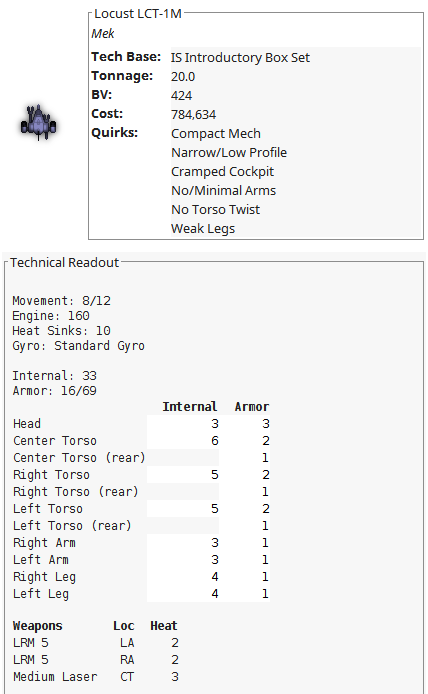 Our only light mech, the LCT-1M is another LRM spitter, mounting a pair of LRM-5s.

This is not a good thing.

House Steiner would be proud of us. We have five heavy mechs, five medium mechs, and one light mech.

Owing to my past experiences, I’ve arranged the Opinionated Bastards into two lances of five and six mechs. This Clan-like arrangement yields a stronger force at the point of contact, and ought to translate into reduced losses in the long run. Given that we pay for things we lose, this is good. The TO&E below has the details. I’m willing to rearrange the lances to divide the heavy mechs between the two, if the voting goes that way. 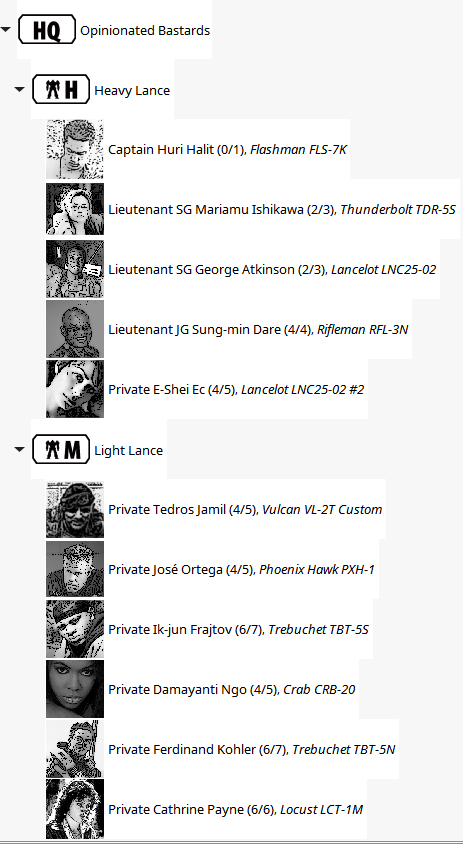 Given the pretty enormous value of the Opinionated Bastards’ assets, we started with a decent pile of cash, enough to cover operations for a year or two (after I buy parts). 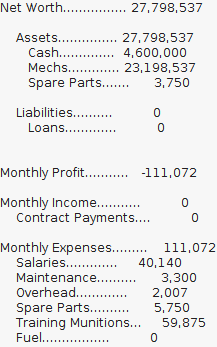 We have none of them. Owing to our lack of standing in the mercenary world, we can buy neither parts nor ammo at present. Certain contracts—objective defense, garrison duty, and so on—will open employer markets to us, so we can build our supplies for harder contracts.

On the plus side, we’re using very little cargo space right now.

We have five contracts available this month.

I’ll handle any items not voted upon.