After a few weeks of downtime, during which our intrepid techs decidedly do not succeed in quickly refitting Teddy Bear‘s Vulcan to the more effective 5T variant, we end up with a battle.

This time, it’s a chase, and we’re the defender. We need to eliminate 50% of the enemy before they reach the north edge of the map.

Heavy Lance gets the nod for deployment again. Only Bear’s Bruisers are able to make it to the battlefield in time. (I house rule this one—when I’m listed as the attacker, I can deploy whatever I want; when I’m listed as the defender, only the listed lance, lances with a duty of Defend can join in automatically. Other lances have to roll 4+ on a d6.) Happily, Teddy Bear borrowed the new Dragon from Private Popalzi, who’s now temporarily driving our Wasp in Cadre Lance.

There are a full five lances of enemies deployed, largely light forces with a few heavier mechs mixed in. There are several Archers, in particular.

Because it’s a chase, and most of the enemy is lighter weight than we are, we’ll be fortunate to catch anything, frankly.

Yes, the enemy gets a seven-round head start. (At least, the lighter things do. All of their speed 6 and slower mechs arrive now too.)

A lot of our mechs are about this fast, so a lot of them show up. Taking the field are Woad, Carcer, Wizard, Hanzoku, Teddy Bear, and our liaison unit, a FedCom Blackjack.

After our first round of deployment and movement, there are a number of enemy vehicles we may be able to get some good attacks off against. 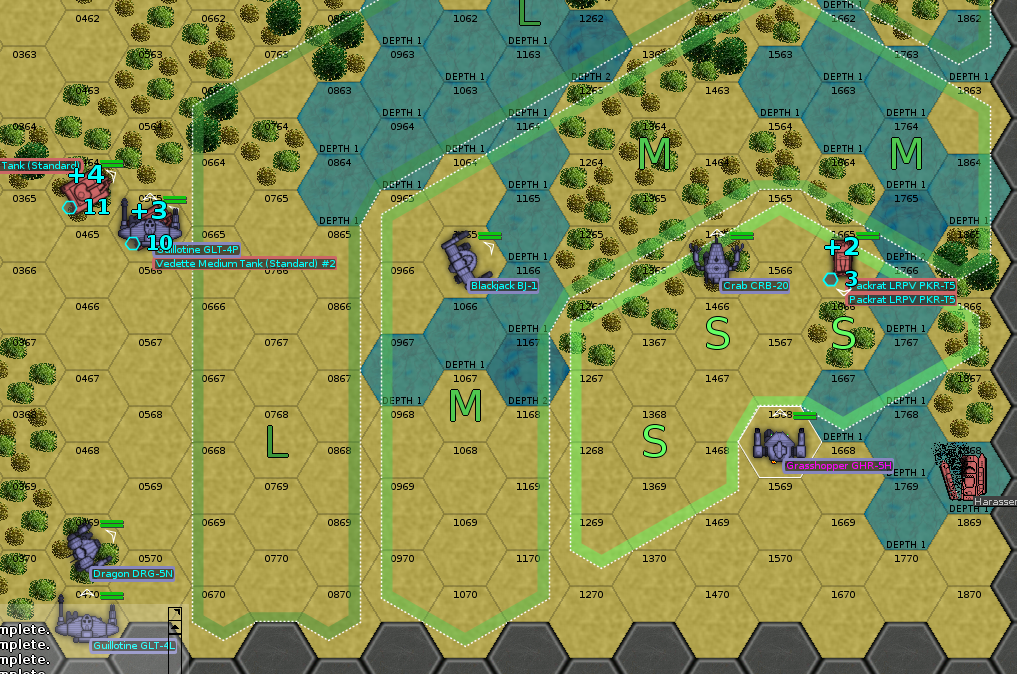 Woad opens up the shooting with a kill on an enemy Packrat patrol vehicle, though he takes a few SRM-6 missiles in response.

Wizard, next to a pair of Vedettes, gets his with three medium lasers and half of an SRM-6 volley, which is sufficient to immobilize the vehicle. She’s in good shape to get on the killboard in her first battle.

Hanzoku and Teddy Bear don’t miss a beat, either, tagging the second Vedette near Wizard sufficiently to immobilize it, too. A good round. 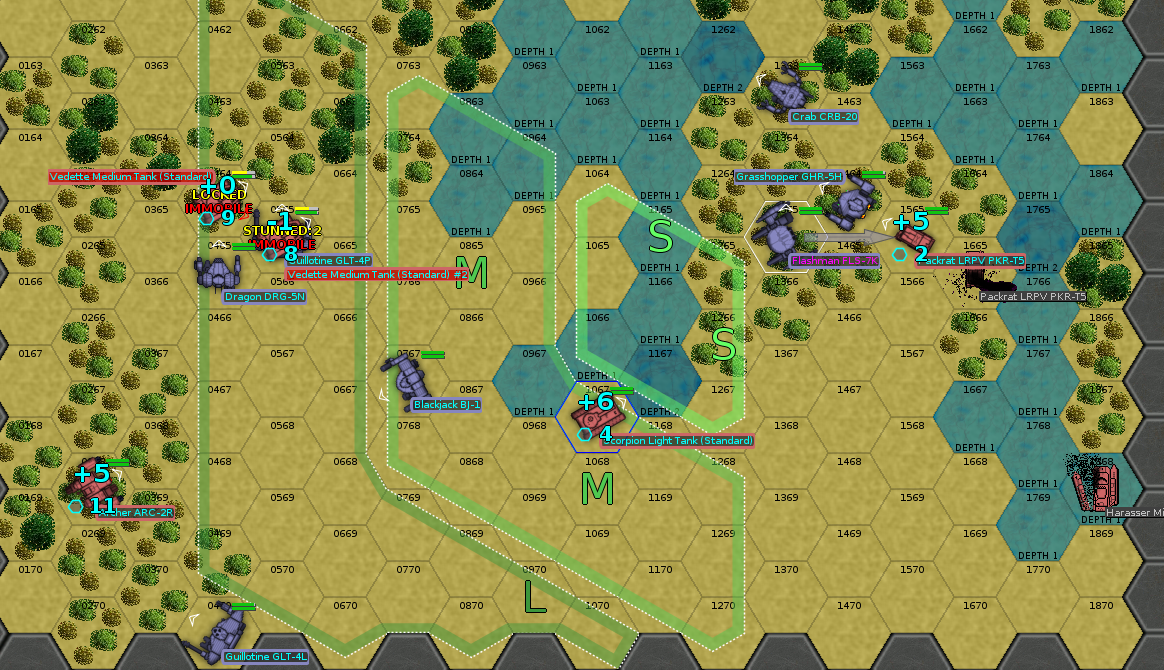 Teddy Bear moves up to join Wizard in knocking out the Vedettes. Hanzoku will work on the Archer until Drake arrives next round.

Rook is on the field, to the east; she’ll try to knock out the Packrat there while Carcer and Woad move forward.

Rook gets her kill, as does Wizard. Teddy Bear doesn’t quite manage to finish his Vedette with his Ultra AC/5, but polishes it off shortly thereafter with a kick to the fuel tank.

Hanzoku makes good progress on the Archer, doing enough damage to knock it down. 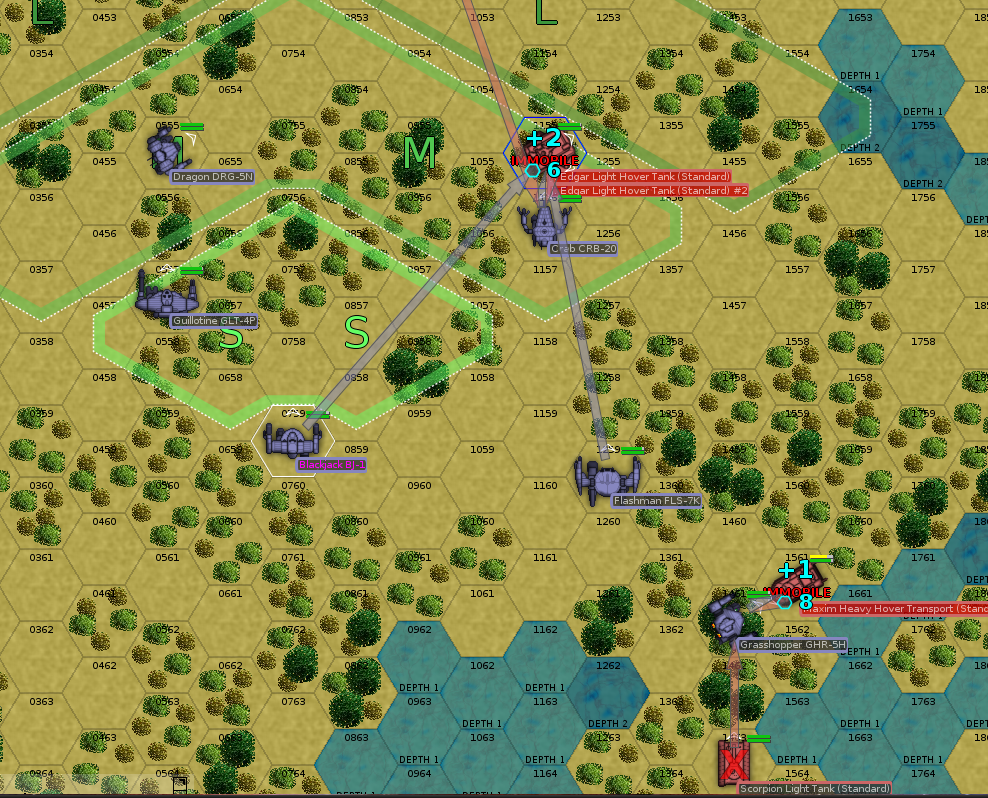 Most of the Bastards push north. Drake is too slow to catch up, and leisurely picks apart the Archer with Hanzoku‘s help.

As the company advances, Woad takes down a Maxim heavy hover transport, and Rook bags a J. Edgar hover tank.

Further back, Hanzoku kicks the Archer in the back, and it falls over again.

We’re well on track to win this one by the victory condition, which I didn’t expect. Early kills by the lighter mechs in these two lances helped us out immensely.

Woad and Rook both score kills again this round; Rook finishes off a Vedette, while Woad bags a Scorpion light tank. 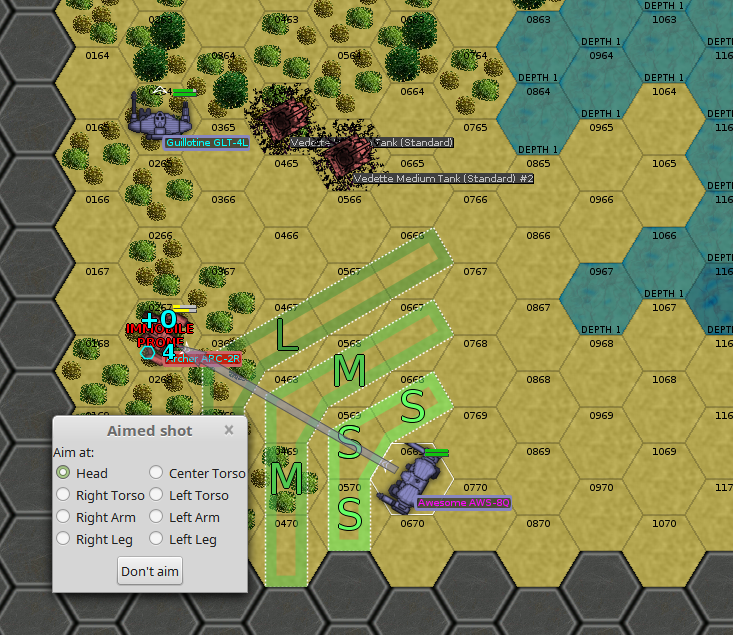 The southern Archer falls once more after Hanzoku kicks it; he advances north to join the rest of the lance, while Drake attempts to decapitate the Archer with a few PPC shots.

Wizard, Teddy Bear, and the allied Blackjack are in position to take a shot at the Galleon light tank near the middle of the map.

Drake gets his critical hit, and a little more to boot. He’s not likely to see much more action this battle, but he’ll gamely run north anyway. 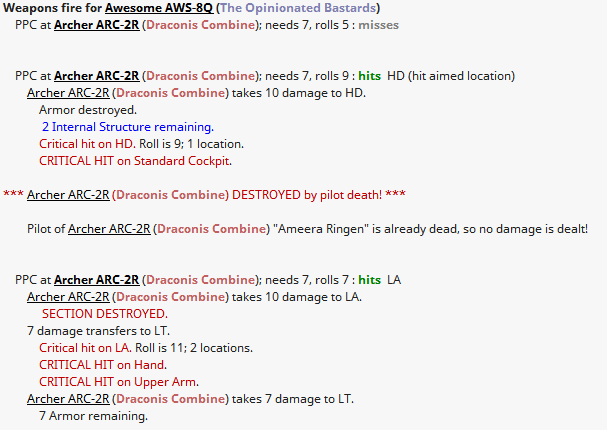 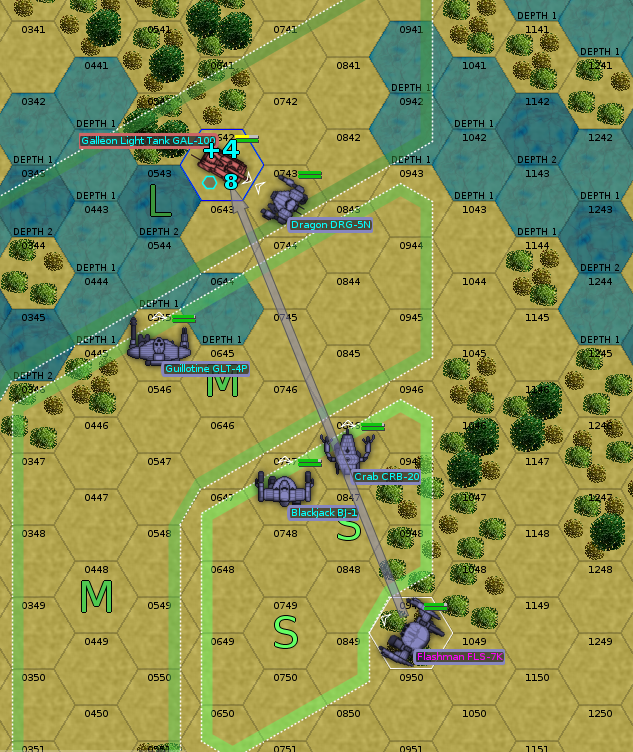 Rook finishes off the Galleon, according to the combat telemetry analyzed after the battle, although it would be more accurate to say that the combined weapons fire of a lance vaporized it just about all at once.

A Phoenix Hawk from the Draconis Combine reinforcements moves into range, and we’ll start to engage that now.

Surprisingly, Drake is catching up and Hanzoku is almost in range. The enemy reinforcements have pushed a bit further south, with a second Archer now roughly in weapons range. We’ll finish off the Phoenix Hawk, take down that Archer, and call it a day.

The Phoenix Hawk pilot ejects after the allied Blackjack kicks out its gyro.

But wait, there’s more! A Vedette from the Combine reinforcements moves south in a futile attempt to cover the Archer’s escape, and Woad, on a tricky LRM-5 shot, finishes it off after the rest of the company chips away at it.

The Dragon and Wizard‘s Guillotine both took a good bit of armor damage. She and Teddy Bear both took a few knocks during the fight, and will have to stop by the infirmary.

As for salvage, well, I’m just going to post the picture and let your jaws drop. 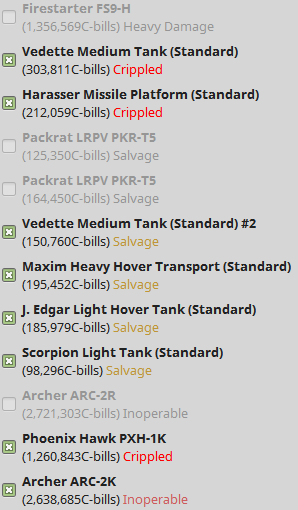 In addition to that epic haul, we earn about 60,000 C-bills in battle loss compensation and 130,000 C-bills from prisoner ransom.

Woad is the story of the day, with another epic five-kill performance to move into a tie for second place on the leaderboard. 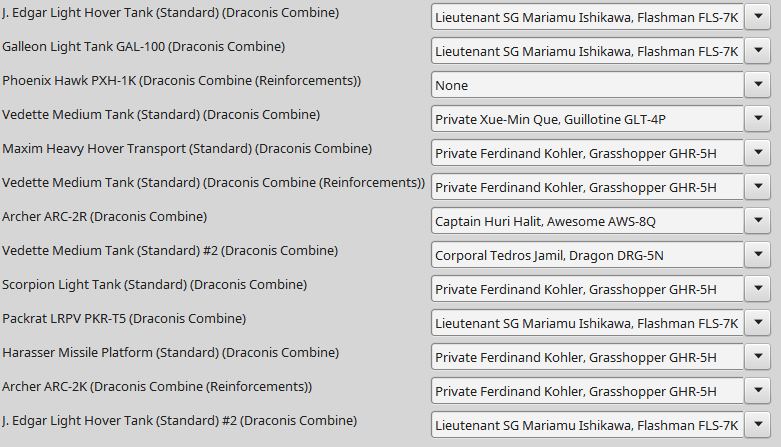 The killboard here pictured is missing the Packrat which Woad killed—the game assigned them both the same name, without giving one a #2, so it didn’t know they were separate kills. I gave him the Harasser Missile Platform instead (which killed itself by failing a movement roll before we even deployed).

Again, no battles on the calendar.

Enemy morale is now believed to be very low.

There are a few tasty chassis on the market, including a few assault mechs, and all are easily affordable. Should we pick anything up? Build a second elite heavy lance? Save the money for now?

The Rifleman and civilian Commando get kicked to the curb. In addition to the monthly payout, that puts our current finances at 15.177 million C-bills.

On the strength of his second five-kill performance, Woad is now a 4+/3+ veteran, and is promoted to Corporal. He also gains Weapon Specialist (ER PPC), not that we can buy ER PPCs. Congratulations!

Nobody else has much to do on the training side. Rook is sitting at 48 experience, and needs 100 to make the final step from Gunnery 1+ to Gunnery 0+. She could alternately spend 40xp to go from Piloting 3+ to Piloting 2+, or buy a special ability.

The Bastards are currently organized into four lances. Heavy Lance and Medium Lance are unchanged. Cadre Lance looks like this:

That’s 205 tons, so it’s not really a good lance to be deploying for combat. It’s a heavy lance by weight, but only barely above medium lance strength. It’s also not really a cadre lance anymore; only Wojtek still benefits from training, and he’ll be up to Regular soon.

It’s a 250-ton heavy lance; not as well-optimized as actual Heavy Lance, but still functional. Its pilots aren’t quite Heavy Lance good, but they’re no slouches; Wizard especially is pretty good.

At present, we have two spare mechs: the Dragon and the Wasp.

As you may have noticed above, Teddy Bear is back in his Vulcan, which is now armored nearly to the level of a stock Rifleman, and mounts a solid primary armament of four medium lasers.

The salvaged Archer and Phoenix Hawk both enter service.

We are quite dramatically understaffed in the technical department; we have fourteen tech teams for eighteen mechs.

I finally worked out answers to a few things that puzzled me for a while, and figured it might be fun to post here in a sort of Q&A format. This follows our articles looking at loadouts for the Bradley and Puma IFVs. Having read those articles, you might be wondering the following:

The space under the turret on the Puma, where we would expect a basket to be on a manned turret, is actually a bunch of storage bins. It takes up about the same amount of space that two more shock-resistant seats would. So that’s where the space goes.

That begs more questions. Why do we need those bins? The Puma requires storage bins under the turret because the Puma’s sponsons contain fuel and various systems. They can’t be used for storage. On the smaller Bradley, the sponsons are empty and open to the cabin. So the space behind the bench seats can be loaded up with tons of stuff for both the vehicle and the dismounts. Check out this picture to see what I mean: Happily, this picture shows the space being used with things you are probably familiar with, like a cooler and a bunch of 2-liter bottles. In combat conditions, we’d expect this to be full 25 mm ammo boxes and TOW missiles for the Bradley, plus food and ammo for the crew and dismounts. If you give up that storage space, you have to put the stuff somewhere else. And you can’t easily relocate stuff for the dismounts outside of the crew compartment. Hence, storage lockers. Note also in the above picture the floor panels at the bottom left. These can be lifted up to access yet more storage space. This space is normally used to fit 25mm ammo. We can also see some storage space under the bench seat. Convenient, but not the best when dealing with antitank mines.

The Puma uses the in-cabin storage lockers for stuff for the dismounts, and it has a bunch of external compartments to hold the 30mm ammo. The Puma was designed with protection and survivability first. The Germans went to a lot of trouble to put in decoupled running gear to minimize the number of penetrations into the hull for the suspension, since penetrations mean weak points for mines. This meant that the sponsons had to hold more suspension gear. Plus, the Puma’s designers tried to isolate the passengers and crew from the fuel and ammo.

The Bradley was designed in an earlier time when survivability was not as paramount, and its designers put firepower first to counter the expected hordes of Soviet light armor. If the Bradleys could take those out, American tanks would be free to concentrate their fire on enemy tanks. Or so the theory went. While possessing a bit of a glass jaw, the Bradley proved to be an excellent vehicle killer in Desert Storm, and was a good fire support vehicle in Operation Iraqi Freedom.